3 3 Questions, questions  Does Canada need a disability act?  What might it contain?  How does this fit with the priorities of the disability movement?  Should we pursue similar legislation at the provincial level?  What are the limits of legislative reform?

11 11 Four Views on a Disability Act 1. Unfamiliarity with the idea among many in general population 2. Not seen as necessary 3. Ambivalence and mild support for the idea, with concerns 4. Favourable stance and strongly positive commitment to the idea

20 20 What about a disability act for BC?  A case can be made for four reasons: Jurisdictional division of powers and citizenship Constitutional and human rights Public policy needs Democratic participation

22 22 Constitutional principles  When providing public services to general population, governments are obliged to ensure disadvantaged members of social groups have resources to make full use of these services  This duty extends to non- governmental bodies with delegated public services to deliver

23 23 Public policy case for a BC act  Large unmet needs, disadvantages and exclusions persist in province  BC government lacks a comprehensive approach for planning and action to secure universal design and full inclusion of persons with disabilities

25 25 What lies ahead, and what to do?  Disability community aspirations at national level  Political calculations for next federal election  A wider disability policy agenda

26 26 Conclusions  Disability legislation at both federal and provincial levels  With effective planning, standards and enforcement  Linked with employment and training measures, and a national income and disability supports strategy 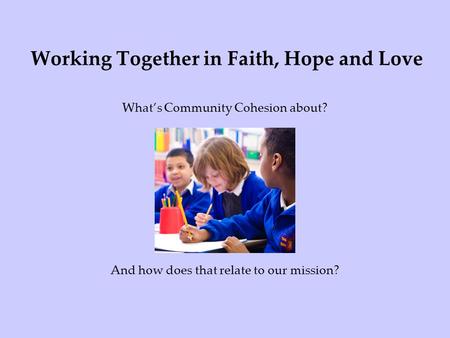 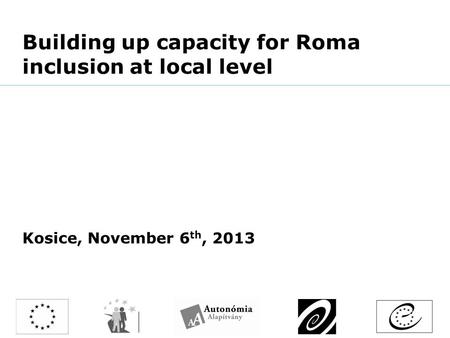 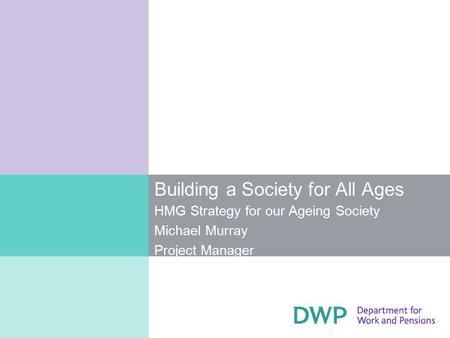 Building a Society for All Ages HMG Strategy for our Ageing Society Michael Murray Project Manager. 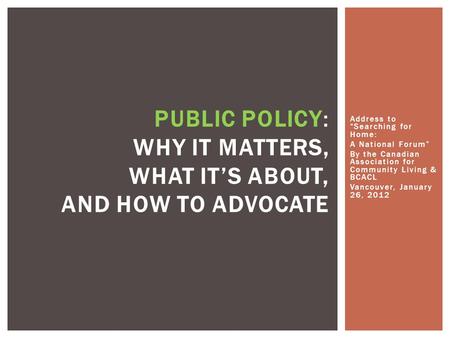 Address to “Searching for Home: A National Forum” By the Canadian Association for Community Living & BCACL Vancouver, January 26, 2012 PUBLIC POLICY: WHY. 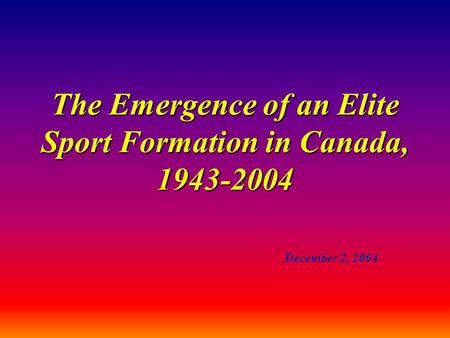 The Emergence of an Elite Sport Formation in Canada, December 2, 2004. 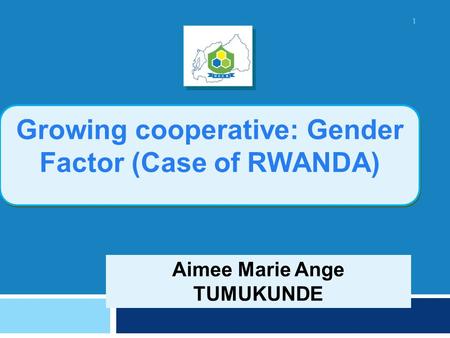 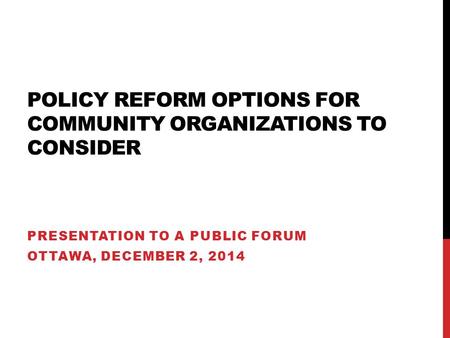 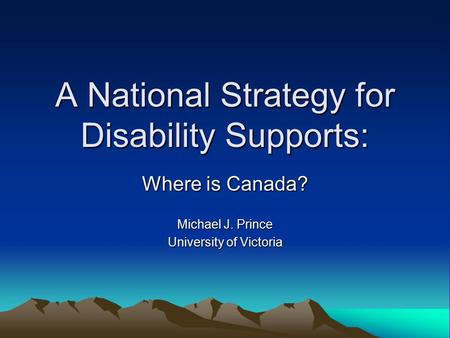 A National Strategy for Disability Supports: Where is Canada? Michael J. Prince University of Victoria. 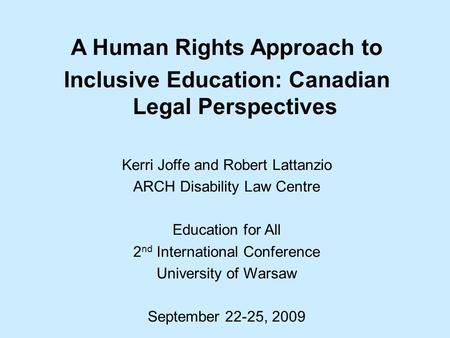 A Human Rights Approach to 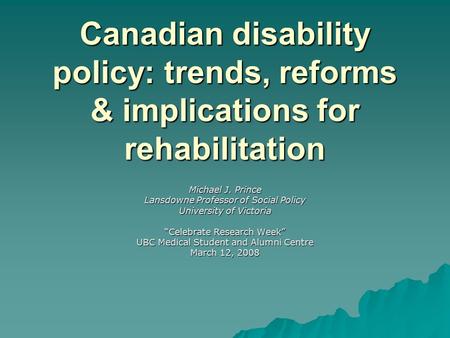 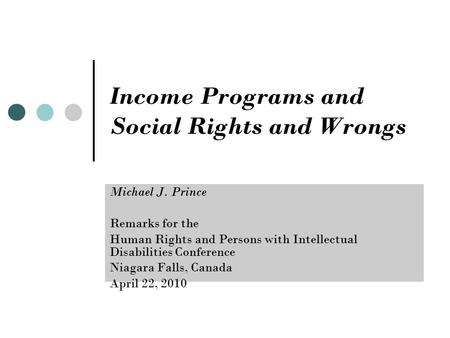 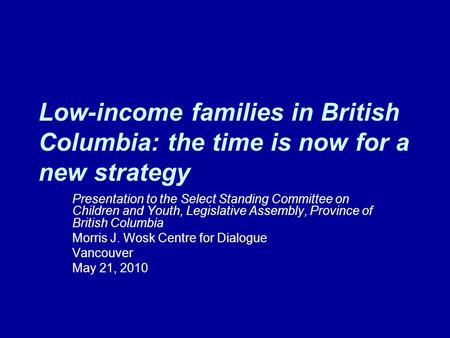 Low-income families in British Columbia: the time is now for a new strategy Presentation to the Select Standing Committee on Children and Youth, Legislative. 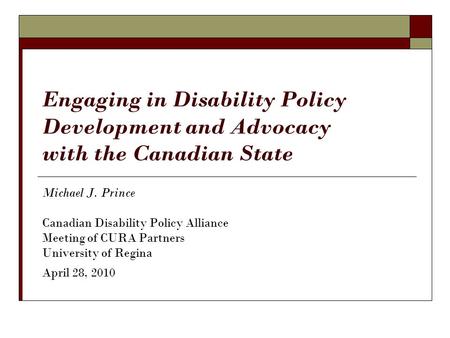 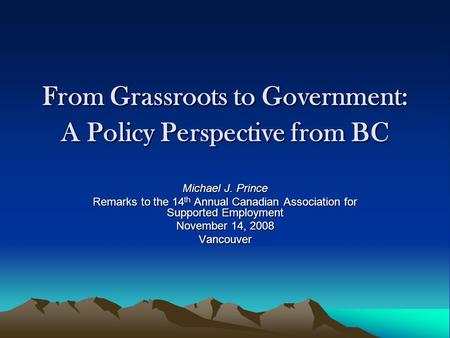 From Grassroots to Government: A Policy Perspective from BC Michael J. Prince Remarks to the 14 th Annual Canadian Association for Supported Employment. 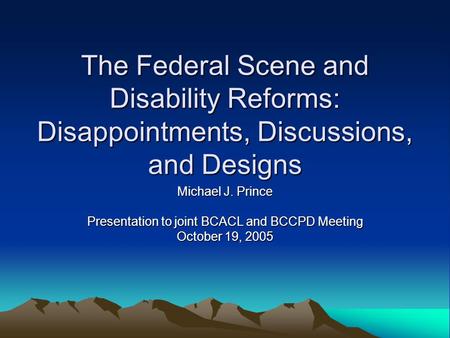 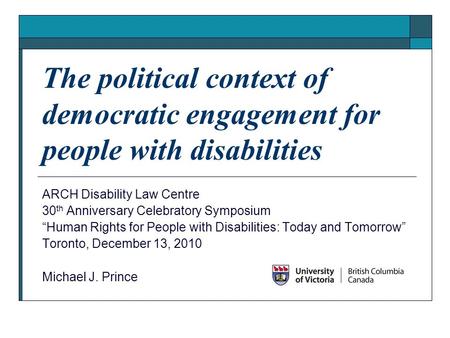 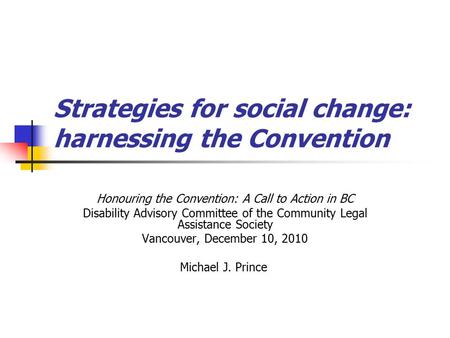