2 Socialization and Crime
Social process theories suggest criminality is a function of socialization Any person regardless of race, class or gender can become criminal Elements of family, peer group, school, and church contribute to socialization processes

6 Socialization and Crime
Educational Experience Children who fail in school offend more frequently than those who succeed Schools contribute to delinquency by labeling students School dropouts have a significant chance of entering a criminal career 2003 national survey estimates about 1.5 million violent incidents occur in public schools each year

7 Socialization and Crime
Peer Relations Children seek out peer groups between the ages of 8 and 14 Peer Rejection: Children rejected by peers are more likely to display aggressive behavior Pro-social friends may inhibit criminality Peers and Criminality: Antisocial peer groups increase the likelihood of delinquency Mark Warr suggests delinquent friends tend to be “sticky” meaning they are not easily lost once they are acquired

8 Socialization and Crime
Institutional Involvement and Belief Religion binds people together Travis Hirschi and Rodney Stark found the association between religion attendance, belief, and delinquency is insignificant Recent research contends that attending religious services is a significant inhibitor of crime

10 Social Learning Theory
Crime is a product of learning norms, values, and behaviors associated with criminal activity Differential Association: Edwin H. Sutherland’s view that criminality is a function of the socialization process

11 Social Learning Theory
Differential Association Theory Differential Association: Edwin H. Sutherland’s view that criminality is a function of the socialization process Criminal behavior is learned Learning is a by-product of interacting with others Learning criminal behavior occurs within intimate personal groups Learning criminal behavior involves assimilating the techniques of committing crime, including motives, drives, rationalizations, and attitudes The specific direction is learned from perceptions of various aspects of the legal code as favorable or unfavorable

12 Social Learning Theory
A person becomes criminal when perceiving the consequences of violating the law as favorable Differential associations vary in frequency, duration, priority, and intensity The process of learning criminal behavior involves the same mechanisms as any other learning process Criminal behavior and noncriminal behavior express the same needs and values

13 Social Learning Theory
Testing Differential Association Theory Difficult to conceptualize and test empirically Research does support the core principles such as links to family, and peers with criminality

15 Social Learning Theory
Differential Reinforcement Theory Ronald Akers suggests “direct conditioning” occurs when behavior is reinforced by rewards or punishment People evaluate their own behavior through their interactions with significant others and groups in their lives Once people are indoctrinated into crime, their behavior can be reinforced through peers and the lack of negative sanctions

18 Social Learning Theory
Techniques of Neutralization Denial of responsibility: unlawful acts are beyond an offenders control Denial of injury: offender’s perception is changed (i.e. stealing is borrowing) Denial of the victim: the victim had it coming (i.e. vandalism) Condemnation of the condemners: shifting the blame to others (i.e. society) Appeal to higher loyalties: loyalty to a higher cause (i.e. Oliver North and Iran Contra)

19 Social Learning Theory
Testing Neutralization Theory Empirical test results are inconclusive Not all criminal offenders approve of social values such as honesty and fairness As Matza predicted, people do seem to drift in and out of antisocial behavior

22 Social Control Theory Hirschi’s Social Bond Theory (social control theory) Travis Hirschi links the onset of criminality to the weakening of the ties than bind people to society ( social bonds) Attachment (sensitivity to and interest in others) Commitment (time, energy, and effort into conventional activities) Involvement (insulates people from the lure of crime) Belief (moral respect for law and social values)

23 Social Control Theory Testing Social Control Theory Empirical studies revealed a strong support for Hirschi’s control theory Youths strongly attached to parents were less likely to commit criminal acts Youths involved in conventional activities were less likely to engage in criminal behavior Youths involved in unconventional behaviors such as drinking and smoking were more prone to delinquency Youths who maintained weak relationships with others moved toward delinquency Those who shunned unconventional acts were attached to peers Delinquents and nondelinquents shar similar beliefs about society Recent research shows attachments to peers, school and family may be interrelated

24 Social Control Theory Opposing Views Friendship: A criticism of Hirschi’s theory is the notion that delinquents are detached loners Not all elements of the bond are equal: Some people are very involved and not attached Deviant peers and parents: Some people are very attached to deviant peers Restricted in scope: May not explain all modes of criminality Change bonds: Bonds seem to change over time Crime and social bonds: Direction of association might be miscalculated in the wrong direction

28 Social Reaction Theory (Labeling Theory)
Consequences of Labeling Labels produce stigma Condemnation is carried out in “ceremonies” such as trials and media attention (degradation ceremonies) Differential social control: Self-labeling involves one taking on the attitudes and roles reflected in how a person views the way others see them Joining deviant cliques: Some labeled people may join cliques and other outcast peers Retrospective reading: refers to the reassessment of a person’s past to fit a current generalized label or status Dramatization of evil: Labels become a personal identity

31 Social Reaction Theory (Labeling Theory)
Is Labeling Theory Valid? Inability to specify the conditions the must exist before an act or individual is labeled Failure to explain differences in crime rates Ignores the onset of deviant behavior Charles Tittle suggests criminal careers occur without labeling 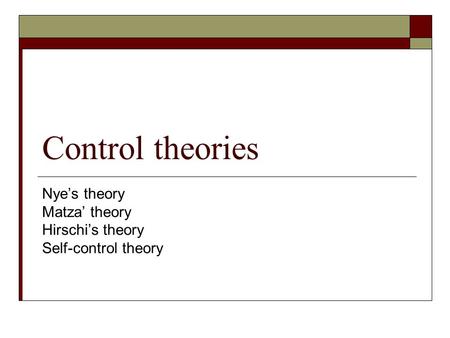 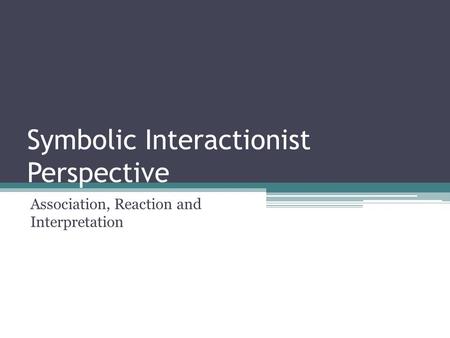 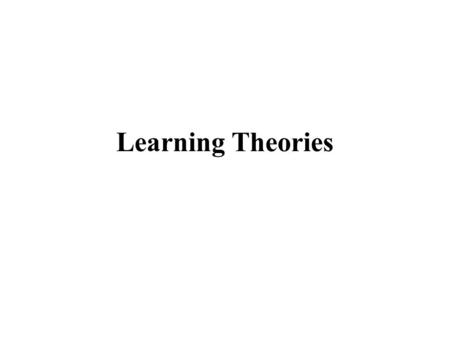 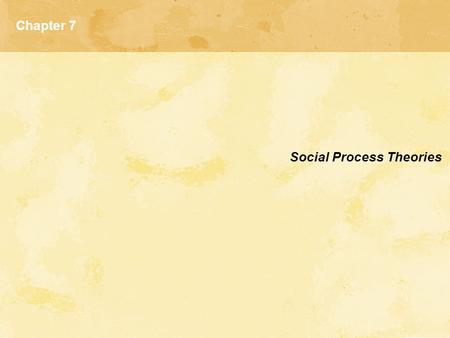 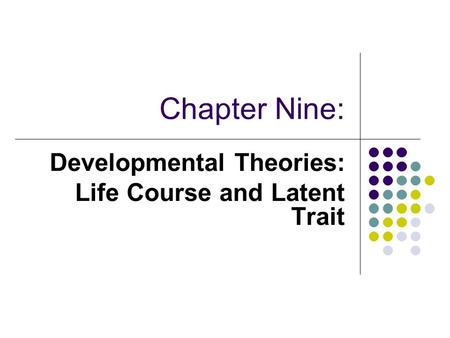 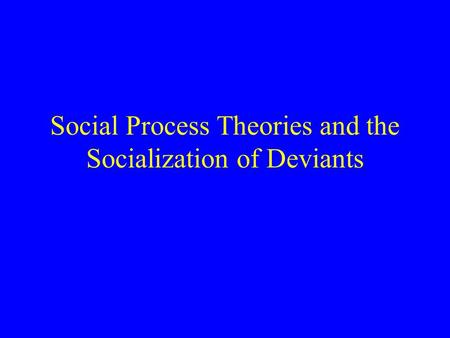 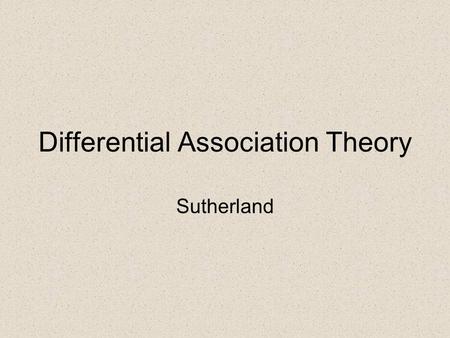 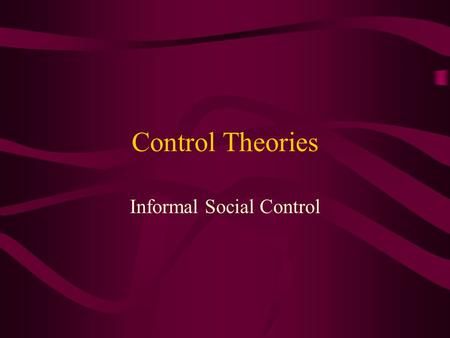 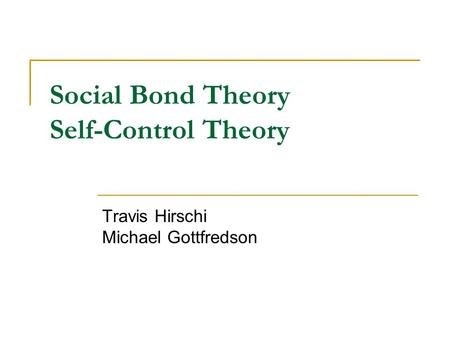 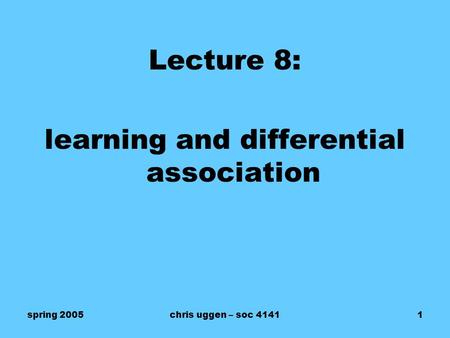 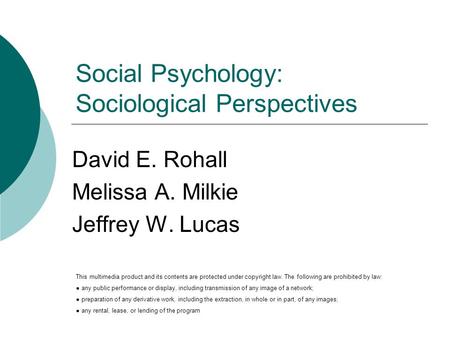