4 Homogeneity With a Cobb-Douglas utility function
utility = U(X,Y) = X0.3Y0.7 the demand functions are Note that a doubling of both prices and income would leave X* and Y* unaffected

5 Homogeneity With a CES utility function utility = U(X,Y) = X0.5 + Y0.5
the demand functions are Note that a doubling of both prices and income would leave X* and Y* unaffected

6 Changes in Income An increase in income will cause the budget constraint out in a parallel manner Since PX/PY does not change, the MRS will stay constant as the worker moves to higher levels of satisfaction

8 Increase in Income If X decreases as income rises, X is an inferior good As income rises, the individual chooses to consume less X and more Y Quantity of Y C U3 Note that the indifference curves do not have to be “oddly” shaped. The assumption of a diminishing MRS is obeyed. B U2 A U1 Quantity of X

11 Substitution & Income Effects
Even if the individual remained on the same indifference curve when the price changes, his optimal choice will change because the MRS must equal the new price ratio the substitution effect The price change alters the individual’s “real” income and therefore he must move to a new indifference curve the income effect

12 Changes in a Good’s Price
A change in the price of a good alters the slope of the budget constraint it also changes the MRS at the consumer’s utility-maximizing choices When the price changes, two effects come into play substitution effect income effect

26 Shifts in the Demand Curve
Three factors are held constant when a demand curve is derived income prices of other goods the individual’s preferences If any of these factors change, the demand curve will shift to a new position

33 Compensated & Uncompensated Demand
X1* X1 PX1 At prices above PX2, income compensation is positive because the individual needs some help to remain on U2 PX PX2 dX hX Quantity of X

36 Compensated Demand Functions
Suppose that utility is given by utility = U(X,Y) = X0.5Y0.5 The Marshallian demand functions are X = I/2PX Y = I/2PY The indirect utility function is

39 A Mathematical Examination of a Change in Price
Our goal is to examine how the demand for good X changes when PX changes dX/PX Differentiation of the first-order conditions from utility maximization can be performed to solve for this derivative However, this approach is cumbersome and provides little economic insight

40 A Mathematical Examination of a Change in Price
Instead, we will use an indirect approach Remember the expenditure function minimum expenditure = E(PX,PY,U) Then, by definition hX (PX,PY,U) = dX [PX,PY,E(PX,PY,U)] Note that the two demand functions are equal when income is exactly what is needed to attain the required utility level

41 A Mathematical Examination of a Change in Price
hX (PX,PY,U) = dX [PX,PY,E(PX,PY,U)] We can differentiate the compensated demand function and get

56 Mathematical Generalization
If, at prices Pi0 bundle Xi0 is chosen instead of bundle Xi1 (and bundle Xi1 is affordable), then Bundle 0 has been “revealed preferred” to bundle 1

57 Mathematical Generalization
Consequently, at prices that prevail when bundle 1 is chosen (Pi1), then Bundle 0 must be more expensive than bundle 1

60 Consumer Welfare One way to evaluate the welfare cost of a price increase (from PX0 to PX1) would be to compare the expenditures required to achieve U0 under these two situations expenditure at PX0 = E0 = E(PX0,PY,U0) expenditure at PX1 = E1 = E(PX1,PY,U0)

61 Consumer Welfare The loss in welfare would be measured as the increase in expenditures required to achieve U0 welfare loss = E0 – E1 Because E1 > E0, this change would be negative the price increase makes the person worse off

66 Consumer Welfare PX When the price rises from PX0 to PX1, the actual market reaction will be to move from A to C The consumer’s utility falls from U0 to U1 C PX1 A PX0 dX hX(U0) hX(U1) X1 X0 Quantity of X

68 Consumer Welfare PX We can use the Marshallian demand curve as a compromise. The area PX1CAPX0 falls between the sizes of the welfare losses defined by hX(U0) and hX(U1) C B PX1 A PX0 D dX hX(U0) hX(U1) X1 X0 Quantity of X

69 Loss of Consumer Welfare from a Rise in Price
Suppose that the compensated demand function for X is given by the welfare loss from a price increase from PX = 0.25 to PX = 1 is given by

71 Loss of Consumer Welfare from a Rise in Price
Suppose that we use the Marshallian demand function instead the welfare loss from a price increase from PX = 0.25 to PX = 1 is given by

72 Loss of Consumer Welfare from a Rise in Price
Because income (I) is equal to 2, loss = 0 – (-1.39) = 1.39 This computed loss from the Marshallian demand function is a compromise between the two amounts computed using the compensated demand functions

76 Important Points to Note:
The Marshallian demand curve summarizes the total quantity of a good demanded at each price changes in price prompt movemens along the curve changes in income, prices of other goods, or preferences may cause the demand curve to shift

77 Important Points to Note:
Compensated demand curves illustrate movements along a given indifference curve for alternative prices these are constructed by holding utility constant they exhibit only the substitution effects from a price change their slope is unambiguously negative (or zero) 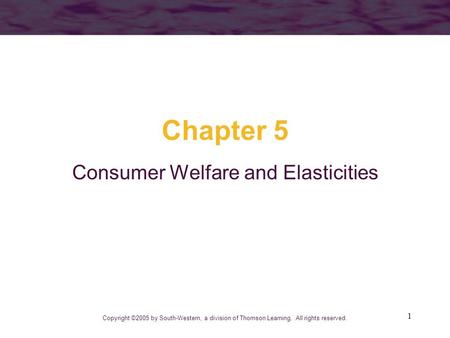 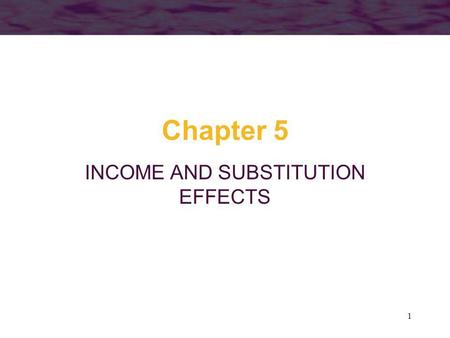 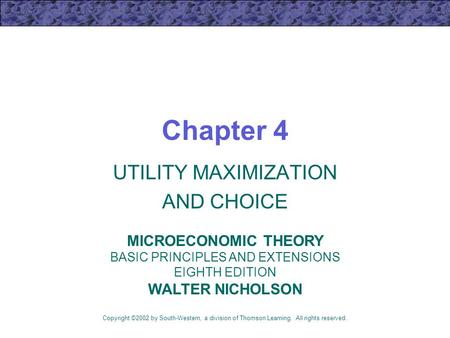 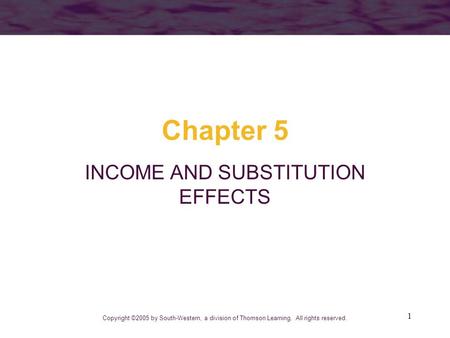 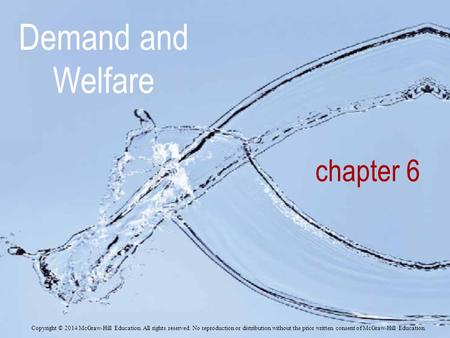 Demand and Welfare chapter 6 Copyright © 2014 McGraw-Hill Education. All rights reserved. No reproduction or distribution without the prior written consent. 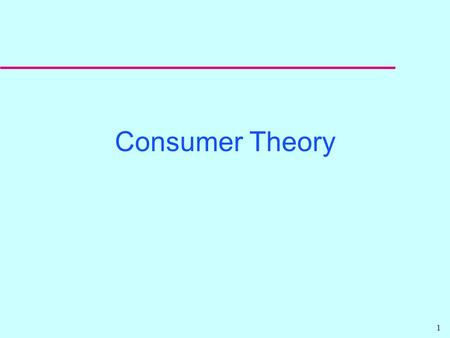 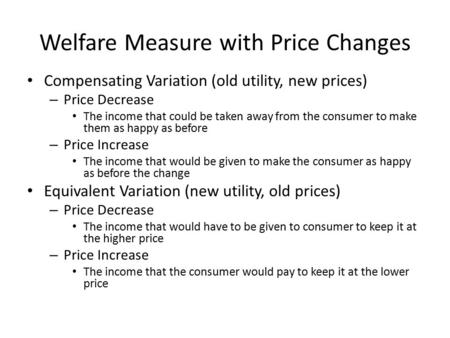 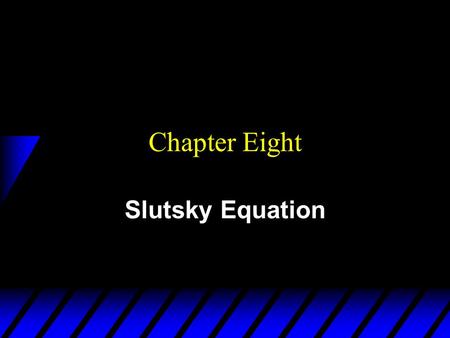 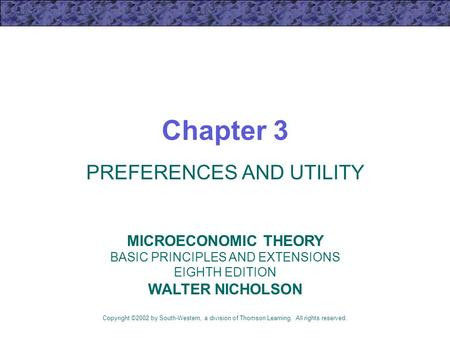 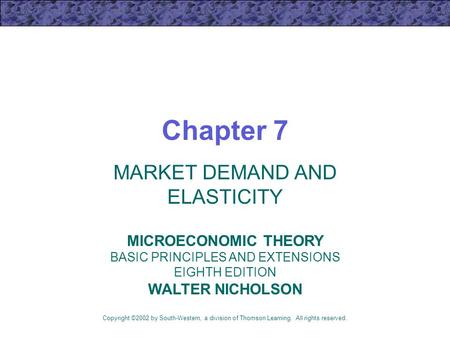 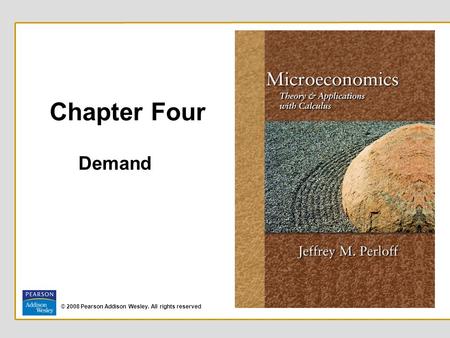 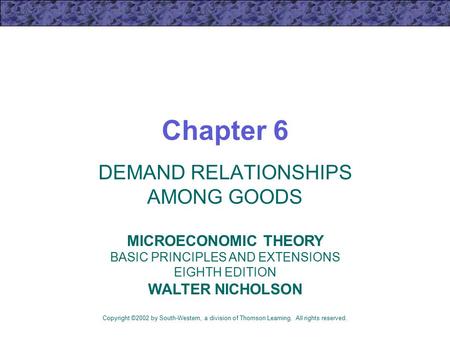 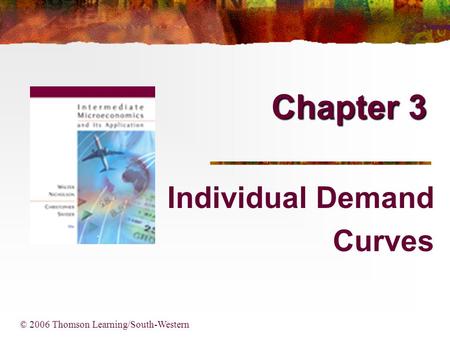 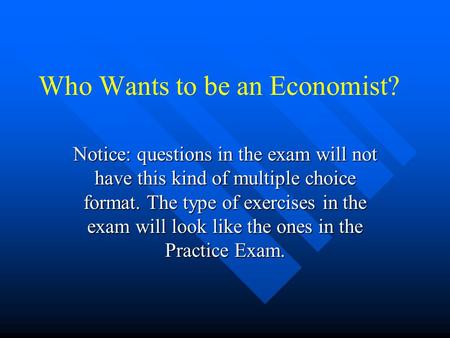 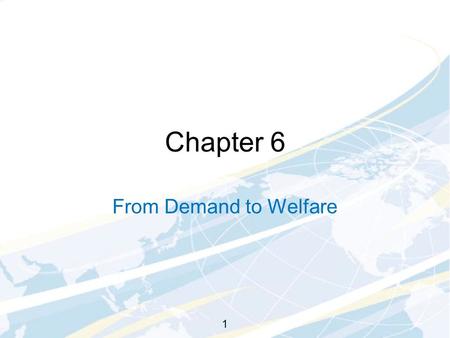