2 Previously on Astro-1 Properties of the Planets: –Orbits in the same plane and direction –Inner planets are small and made of heavy elements –Outer planets are big and made of light elements Other bodies in the Solar system –There are seven large satellites (like the moon) –Outer solar system is populated by TNO, KBO and comets How do we learn about solar system bodies? –We send probes –Spectroscopy reveals the composition of atmospheres –Craters and magnetic fields reveal the presence of a liquid melted core

5 A meteorite: the surface shows evidence of having been melted by air friction as it entered our atmosphere at 40,000 km/h (25,000 mi/h). Meteorites are the oldest objects in the solar system.

6 Each type of radioactive nucleus decays at its own characteristic rate, called its half-life, which can be measured in the laboratory This is used in radioactive age-dating to determine the ages of rocks Age of oldest rocks in the solar system: 4.56 x 10 9 years

10 The dying star Antares is shedding material from its outer layers, forming a thin cloud around the star. Antares Dust that used to be in Antares

14 The formation of the sun and its planets

18 Probable temperatures variations across the solar nebula as the solar system was forming.

19 The young Sun was hotter than it is today. In the inner part of the solar system, only the heavier elements could remain solid – lighter stuff could not condense, and got blown farther out, until it found a spot cool enough to condense. Since there are fewer heavy elements, the terrestrial planets formed close-in are smaller than the gas giants.

24 Jovian Planets and their satellites

25 The Kuiper Belt: The gravitational influence of the Jovian planets pushed small, icy objects to the outer reaches of the solar system past Neptune. The result shown in this artist’s conception is the Kuiper belt, a ring populated by trans-Neptunian objects like Pluto, icy planetesimals, and dust.

26 If you slice open a meteorite you see chondrules – regions that melted due to rapid heating and cooling in the early solar system.

27 This highly magnified image shows a microscopic dust grain that came from interplanetary space. It entered Earth’s upper atmosphere and was collected by a high-flying aircraft. Dust grains of this sort are abundant in star-forming regions like the Orion nebula. These tiny grains were also abundant in the solar nebula and served as the building blocks of the planets. Stardust – mission to collect dust from interplanetary space and Comet Wild 2.

28 Question 11.2 (iclickers!) The formation of terrestrial planets around a star is thought to have occurred by what process? A) Breakup of a large disk of matter which formed around the star B) Condensation of gas from the original star nebula C) Capture by the star of objects traversing the depths of space D) Accretion or slow accumulation of smaller particles by mutual gravitational attraction

30 Evidence from other worlds

32 Infrared image showing IRAS 043022247, a young star that is still surrounded by a disk of gas and dust – it is much larger than our solar system and will shrink.

36 Summary Solar System Formation: the nebular hypothesis. The Sun: –formed by gravitational contraction of the center of the nebula. Terrestrial planets: – formed through accretion of dust particles into planetesimals, then into larger protoplanets. Jovian planets: –Began as rocky protoplanetary cores, similar in character to the terrestrial planets. Gas then accreted onto these cores. –Alternatively, they formed directly from the gases of the solar nebula. In this model the cores formed from planetesimals falling into the planets.

37 The End See you on wednesday 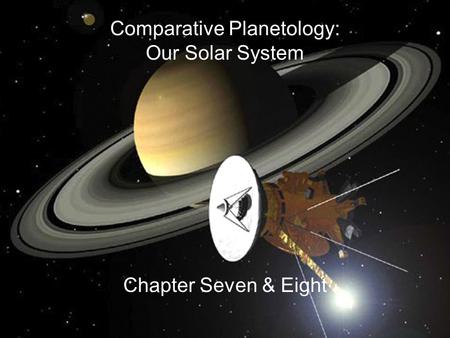 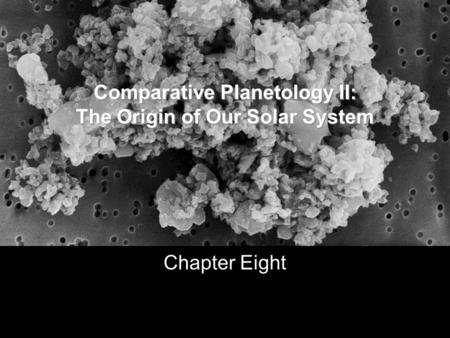