3 9-12/7/2008Hefei3 Motivations Heavy ion collisions at various centralitis offer us various bulks of hot dense matter. The interaction between jets ( hard partons) and the bulk has received notable interest, i.e. jet quenching is one of the most exciting observables at RHIC. The interaction of partons inside the bulk and the properties of the bulk are of great interest, which may offer us some insight to quark confinement.

4 9-12/7/2008Hefei4 direct photons, jets and plasma PRL94,232301(2005), PRL96,202301(2006) 1.Jet queching gives different effects to direct photons? 2. Thermal photons and JPC photons are penetrating probes for the interaction of partons inside the bulk and the interaction between jet and bulk. We can make cross check of the properties of the medium.

8 9-12/7/2008Hefei8 Parton Energy Loss in a Plasma Energy loss of parton i=q, g, D: free parameter Energy loss per unit distance, by BDMPS Every factor depends on the location of jet in plasma, i.e., f QGP : fraction of QGP at a given point

11 9-12/7/2008Hefei11 Sources of direct photons Leading Order contr. from primordial NN scatterings (does not depend on the plasma) Thermal contribution Interactions of thermal partons are inside the rate!

18 9-12/7/2008Hefei18 Jet quenching & bulk volume Parton energy loss does play a role in fragmentation contribution and JPC. This is centrality-dependent, similar to the suppression to pi0 production.

20 9-12/7/2008Hefei20 Information from Thermal photons Energy density at plasma center The slope of pt spectrum at low pt region (dominant by thermal photons) can reflect the temperature (energy density, …) of the bulk. The yields of photons (mainly low pt ) is roughly proportional to N coll., which reflect the bulk volume. Raa due to thermal source

21 9-12/7/2008Hefei21 Discussion and Conclusion Parton energy loss does make a visible but not so significant effect in Raa(γ) compared to Raa (π). D=0.5 is to understand. The modification of Raa(γ) by jet quenching is at the same degree of that by theory scales, which is quite different from the case of Raa (π). Raa(γ) is weakly dependent on centrality for pt> 6GeV/c, due to 1) the dominance of leading order contribution 2) the compensation btw JPC and fragmentation contribution. As a penetrate probe, thermal photons can reflect the properties of bulk, i.e., temperature and volume via the slope of pt spectrum and the yields. The interaction between thermal partons gives a cross check to the information offered by parton energy loss.

22 9-12/7/2008Hefei22 Thank you! One more word: v2 of direct photons is expected to offer much more Information. Our results and experiment measurements are coming soon! 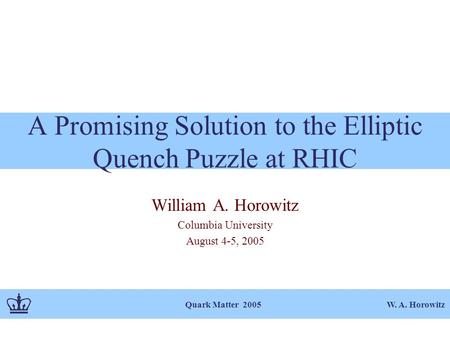 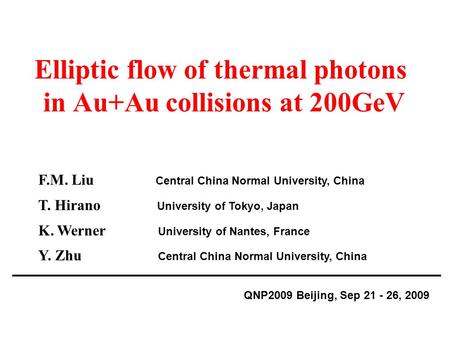 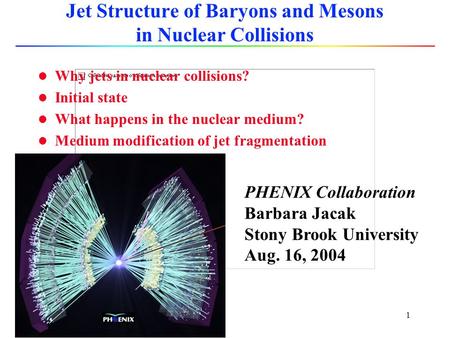 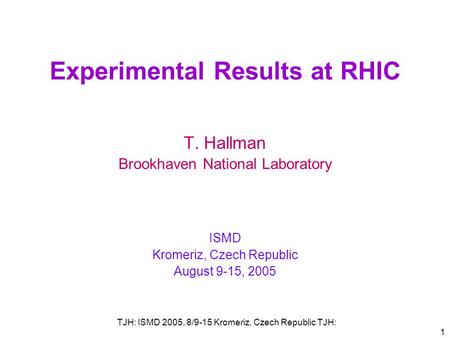 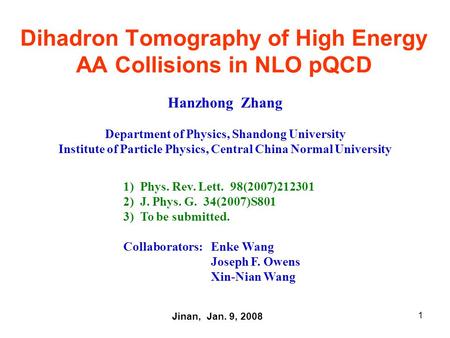 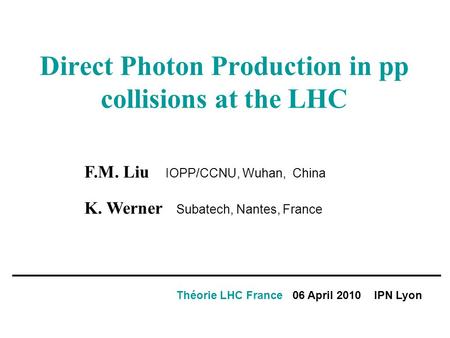 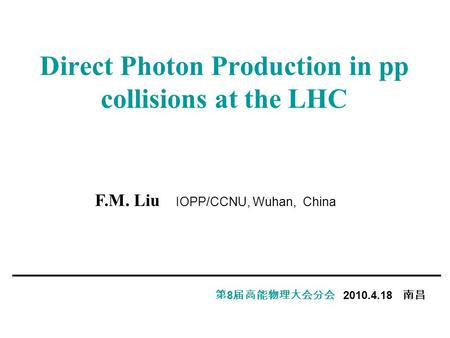 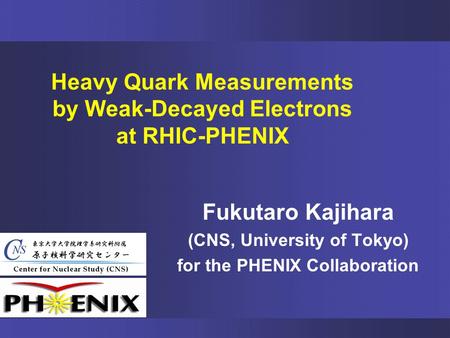 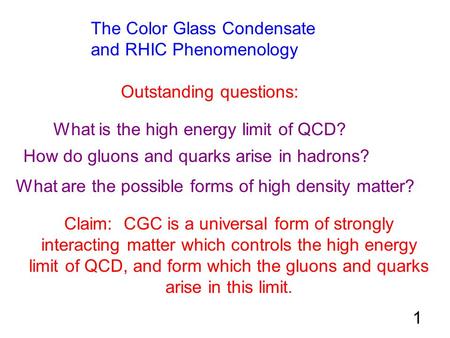 The Color Glass Condensate and RHIC Phenomenology Outstanding questions: What is the high energy limit of QCD? How do gluons and quarks arise in hadrons? 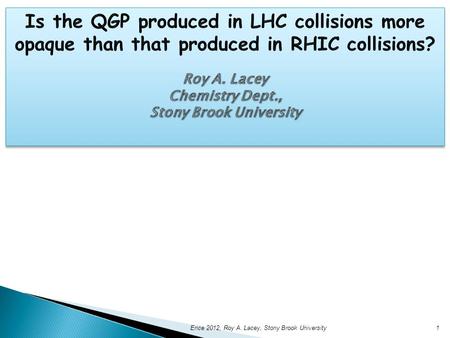 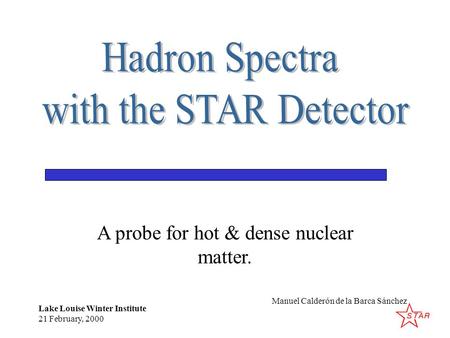 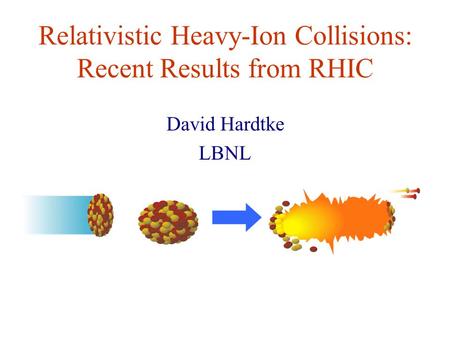 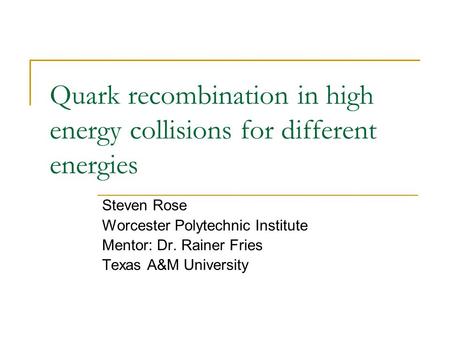 Ali Hanks - APS Direct measurement of fragmentation photons in p+p collisions at √s = 200GeV with the PHENIX experiment Ali Hanks for the PHENIX. 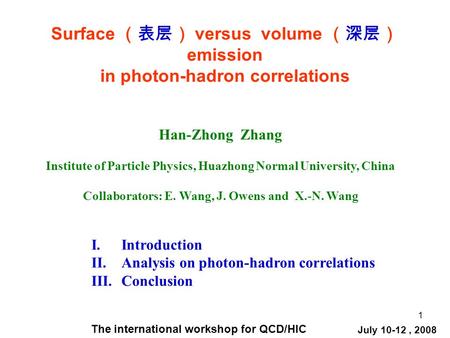 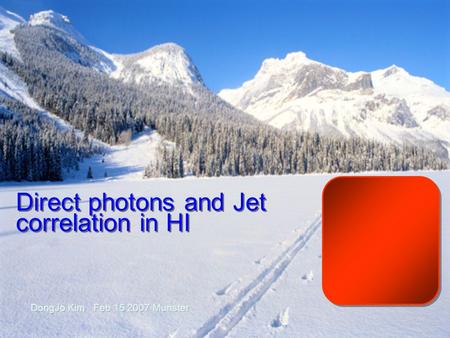 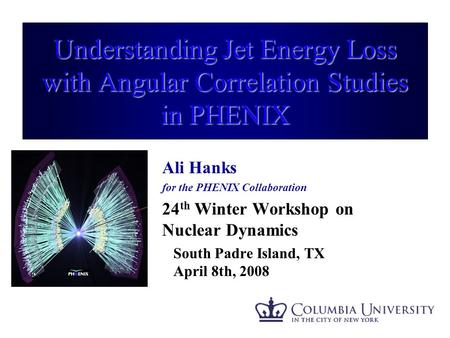 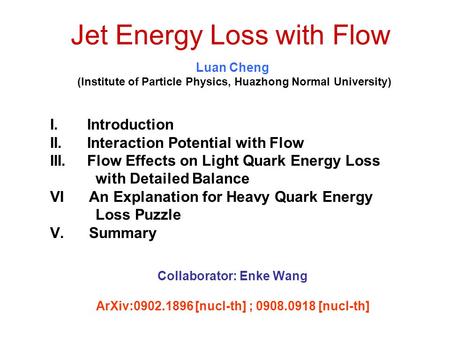 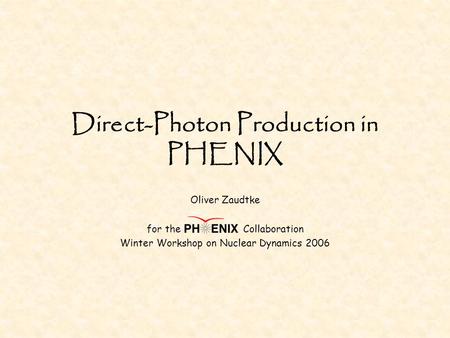 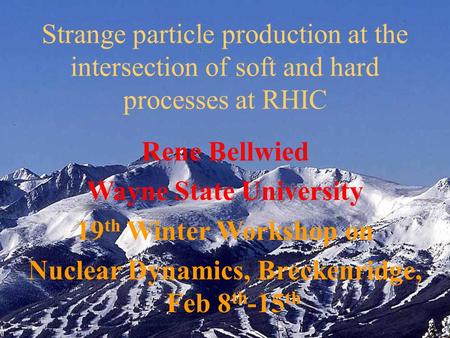