3 What is a Galaxy? Stellar Region 30 light-years Sun (solar system too small to be seen on this scale)

4 What is a Galaxy? Galaxy 200,000 light-years a massive collection of stars, gas, and dust kept together by gravity Sun’s Stellar Region

5 What is a Galaxy? If our solar system was the size of a cell in the human body, our galaxy would still measure over one mile across.

6 Types of Galaxies Spiral disk-like appearance with arms of stars and dust forming a spiral pattern Barred Spiral similar to spirals but with a bright bar of stars and gas through the center Elliptical elliptically-shaped, with less gas and dust than spirals; no disk or “arms” Irregular neither elliptical nor spiral in shape; gas and dust as in spirals but no defined “arms” Peculiar distorted form of one of the above types, often due to collision with another galaxy or similar catastrophic event

7 The Hidden Lives of Galaxies

9 Spirals vs. Ellipticals Final type of galaxy depends on initial rate of star formation: - If stars form quickly, then galaxy becomes elliptical. Stars form within initial distribution of gas,and follow their initial orbits. - If stars form later, the gas has time to collapse into a disk. Most stars from within the disk. The galaxy becomes a spiral.

10 Formation via Galaxy Mergers In clusters, galaxies can pass close to one another. Galaxies can become distorted, and often merge. Mergers often lead to giant elliptical galaxies at the heart of large clusters.

16 Hidden Mass in Galaxies This X-ray image of an elliptical galaxy reveals hot, fast- moving gas even in the outer reaches of the galaxy. The visible mass of the galaxy is insufficient to hold onto it. (The dark circle shows the size of the galaxy when photographed in visible light. The X-ray image shows mass far outside the visible image.)

17 Hidden Mass in Galaxies So, we have a Problem: This gas gives off X-rays, which means it’s hot! Hot gas moves at high velocities - we can measure and confirm this The velocity of the gas is greater than the escape velocity of the galaxy, if we calculate the galaxy’s mass by adding up all the mass we can see at all wavelengths of light So why hasn’t the gas escaped? There must be more mass we can’t see!

18 Hidden Mass in Galaxies Another way to look at the problem: We can determine the mass of an object by measuring the motion of bodies in orbit around it. Newton’s Second Law: F = Force of Gravity a = acceleration due to circular motion

19 Hidden Mass in Galaxies From previous slide, we have Newton’s Second Law of Motion assuming a gravitational force and acceleration due to circular motion: Simplifying gives: So, if GM is constant, then velocity is proportional to the inverse square root of distance. For example...

20 Hidden Mass in Galaxies Rotation Curve - A Plot of Object Velocity vs. Distance Our Solar System

22 Hidden Mass in Galaxies Rotation Curve - A Plot of Object Velocity vs. Distance Our Solar System

23 Hidden Mass in Galaxies The previous plot showed data for planets in our solar system, illustrating the equation: If we solve for M: We can use real data (the distances and velocities of the planets) and the fact that G = 6.67 x 10 -11 m 3 /kg-s 2 to verify that the central mass, M, remains constant..

25 Hidden Mass in Galaxies What does this have to do with Galaxies??? If we measure the distance and velocity of objects (eg., stars) orbiting in a galaxy, we’d expect them to obey the same laws. As distance from the center of the galaxy increases, we should get to a point where almost all of the galaxy’s mass is inside the orbit of the furthest objects. At this point, the central mass would be practically constant, and we would expect a rotation curve similar to that for our solar system.

26 Hidden Mass in Galaxies What we expect for a galaxy if all the mass was concentrated in the central region. Compare expected velocities with actual velocities

27 Hidden Mass in Galaxies and use the actual distances and velocities observed for this galaxy, we can calculate the enclosed mass at various distances from the galaxy’s center. (Remember that G = 6.67 x 10 -11 m 3 /kg-s 2 ) If we take the same equation we used for the solar system:

29 Hidden Mass in Galaxies What Happened?!?!? The central mass never becomes constant, as it did for the Solar System. The fact that the mass is still increasing means we haven’t yet reached a distance where all the mass is contained inside that orbit. But we’ve plotted all the matter we see! There must be Missing Mass!!

30 Hidden Mass in Galaxies Hot Gas and Rotation Curves show: Gas and objects move at velocities greater than can be accounted for from the gravitational effect of the visible mass of the galaxy. From these observations we deduce that the visible mass accounts for only 10 % of the total mass of the galaxy. Recent results from WMAP show ordinary matter makes up only 4% of the universe!

32 The Hidden Lives of Galaxies Presentation available at http://imagine.gsfc.nasa.gov/docs/teachers/galaxies/galaxies.html 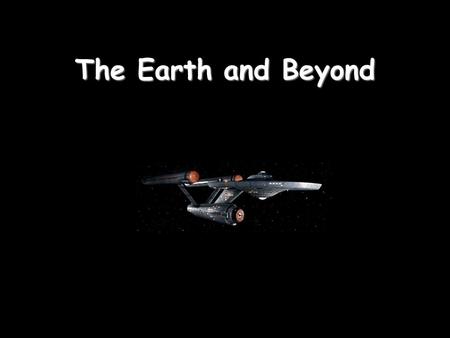 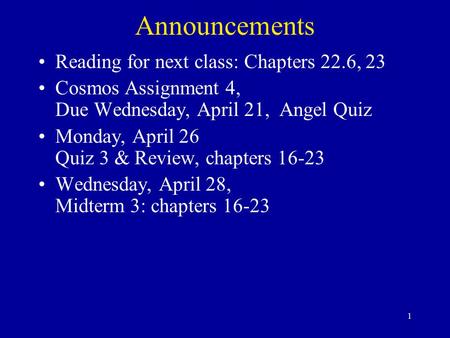 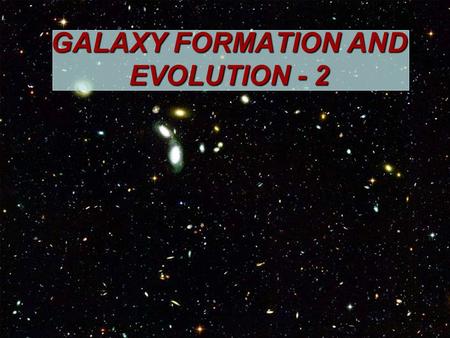 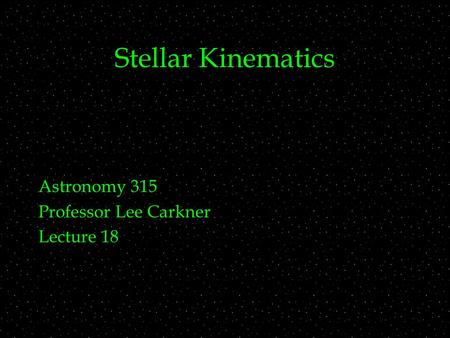 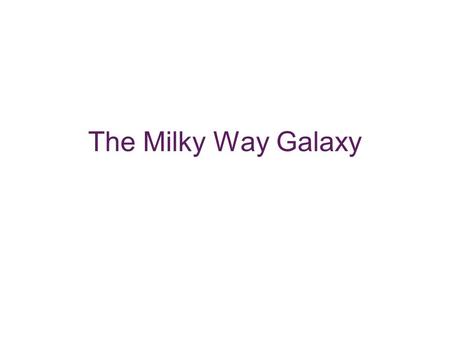 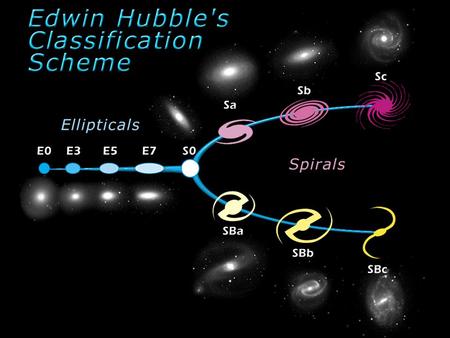 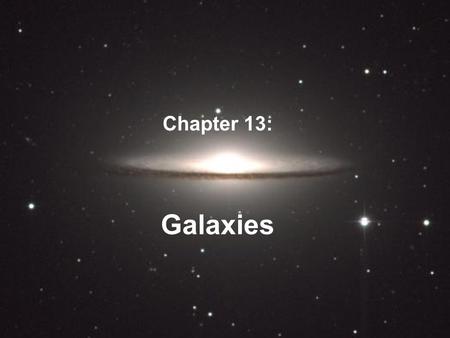 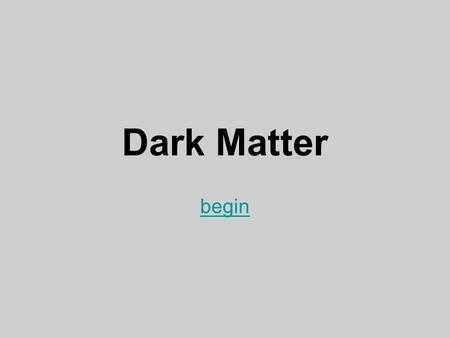 Dark Matter begin. Definition Dark Matter is matter that we cannot see. It neither emits nor reflects any light. If we can’t see it, how do we know it. 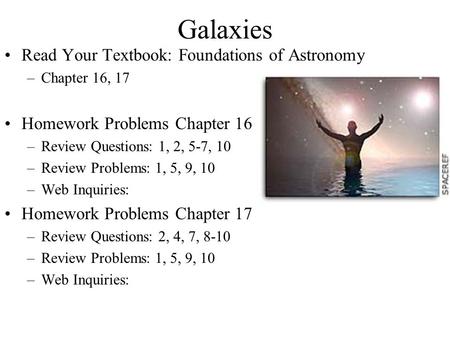 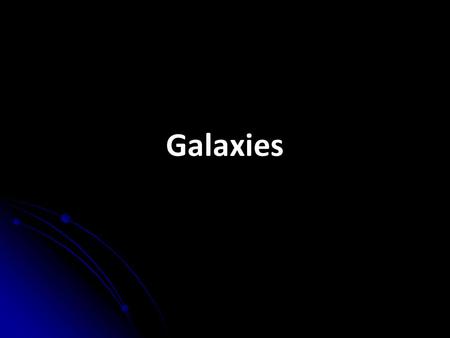