2 Timing Algorithms It can be very useful to time how long an algorithm takes to run In some cases it may be essential to know how long a particular algorithm takes on a particular system However, it is not a good general method for comparing algorithms Running time is affected by numerous factors How are the algorithms coded? What computer should we use? CPU speed, memory, specialized hardware (e.g. graphics card) Operating system, system configuration (e.g. virtual memory), programming language, algorithm implementation Other tasks (i.e. what other programs are running), timing of system tasks (e.g. memory management) What data should we use? Input used: example with linear and binary search.

3 Cost Functions Because of the sorts of reasons just discussed for general comparative purposes we will count, rather than time, the number of operations that an algorithm performs Note that this does not mean that actual running time should be ignored! Note: running time can depend on 2 parameters; example c(n,k) “choosing k items from n”.

4 Cost Functions For simplicity we assume that each operation take one unit of time. If algorithm (on some particular input) performs t operations, we will say that it runs in time t. Usually running time t depends on the data size (the input length). We express the time t as a cost function of the data size n We denote the cost function of an algorithm A as tA(), where tA(n) is the time required to process the data with algorithm A on input of size n Typical example of the input size: number of nodes in a linked list, number of disks in a Hanoi Tower problem, the size of an array, the number of items in a stack, the length of a string, … Note: running time can depend on 2 parameters; example c(n,k) “choosing k items from n”.

6 Algorithm Growth Rates.
We often want to compare the performance of algorithms When doing so we generally want to know how they perform when the problem size (n) is large So it’s simpler if we just find out how the algorithms perform as the input size grows- the growth rate.

9 Since cost functions are complex, and may be difficult to compute, we approximate them using O notation – O notation determines the growth rate of an algorithm time.

13 In English… The cost function of an algorithm A, tA(n), can be approximated by another, simpler, function g(n) which is also a function with only 1 variable, the data size n. The function g(n) is selected such that it represents an upper bound on the efficiency of the algorithm A (i.e. an upper bound on the value of tA(n)). This is expressed using the big-O notation: O(g(n)). For example, if we consider the time efficiency of algorithm A then “tA(n) is O(g(n))” would mean that A cannot take more “time” than O(g(n)) to execute or that (more than c.g(n) for some constant c) the cost function tA(n) grows at most as fast as g(n)

14 The general idea is … when using Big-O notation, rather than giving a precise figure of the cost function using a specific data size n express the behaviour of the algorithm as its data size n grows very large so ignore lower order terms and constants

17 Order-of-Magnitude Analysis and Big O Notation
A comparison of growth-rate functions: a) in tabular form

19 Order-of-Magnitude Analysis and Big O Notation
A comparison of growth-rate functions: b) in graphical form

21 Note on Constant Time We write O(1) to indicate something that takes a constant amount of time E.g. finding the minimum element of an ordered array takes O(1) time, because the min is either at the beginning or the end of the array Important: constants can be huge, and so in practice O(1) is not necessarily efficient --- all it tells us is that the algorithm will run at the same speed no matter the size of the input we give it 21000 is of O(1) 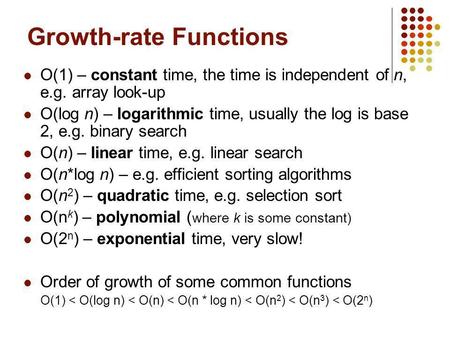 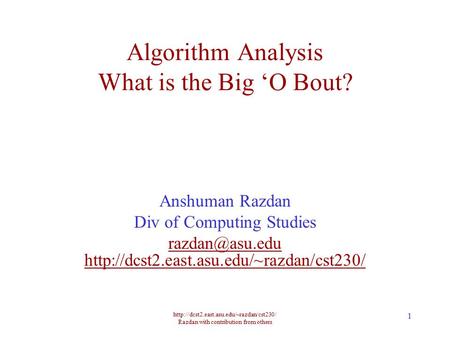 Razdan with contribution from others 1 Algorithm Analysis What is the Big ‘O Bout? Anshuman Razdan Div of Computing. 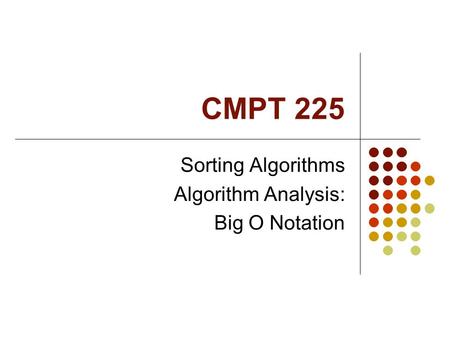 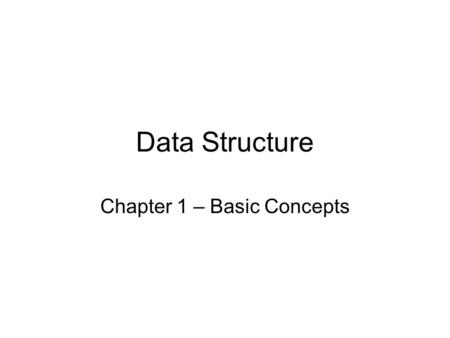 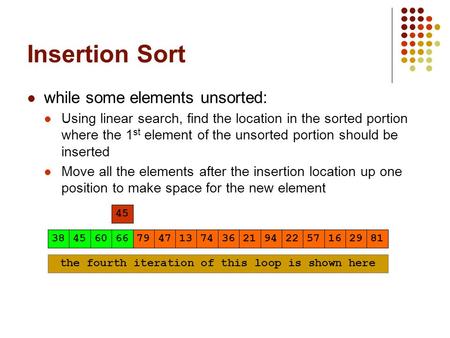 the fourth iteration of this loop is shown here 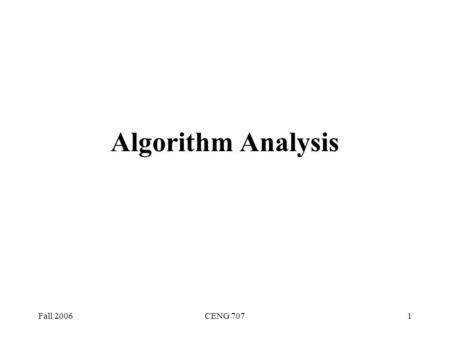 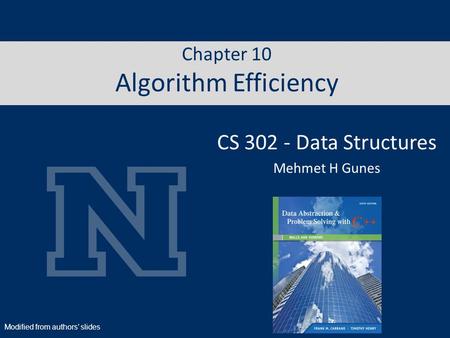 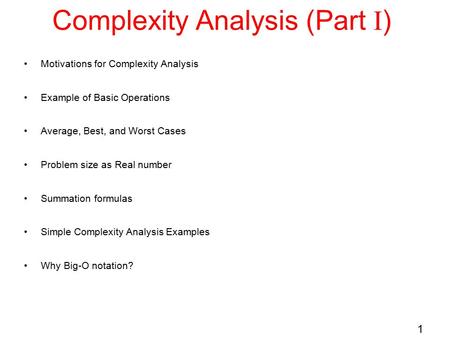 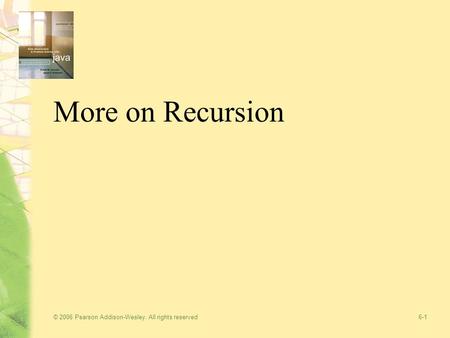 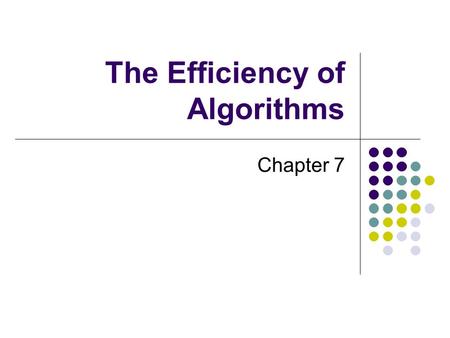 The Efficiency of Algorithms 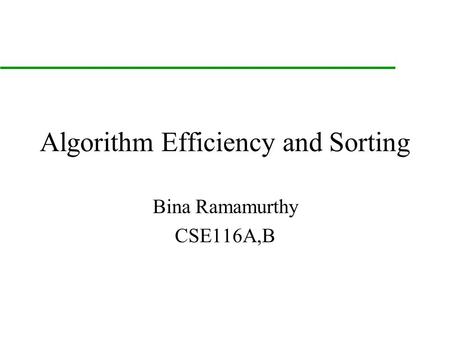 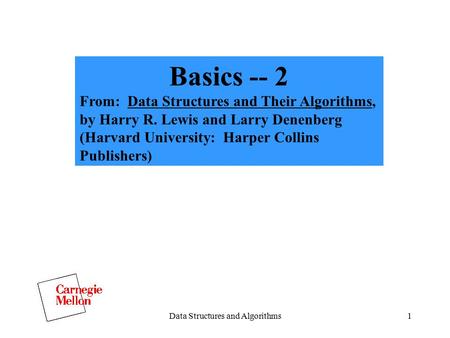 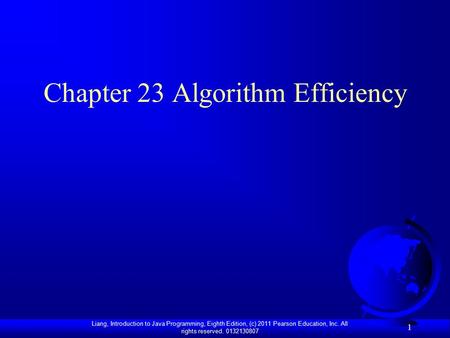 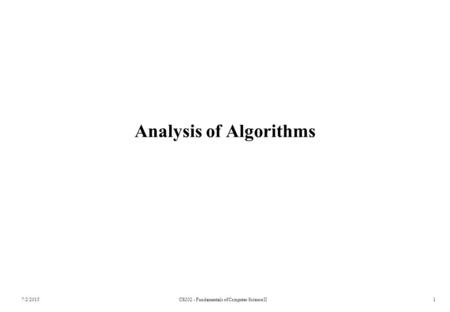 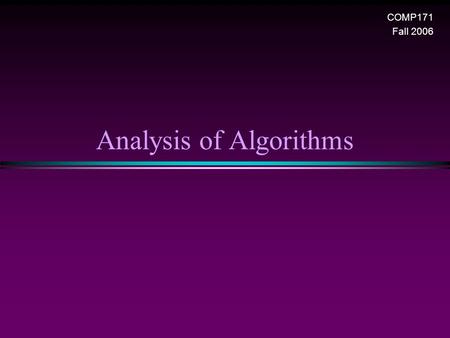 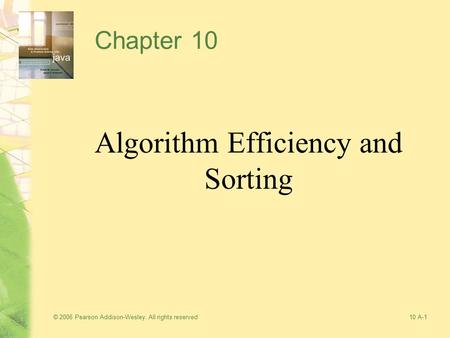 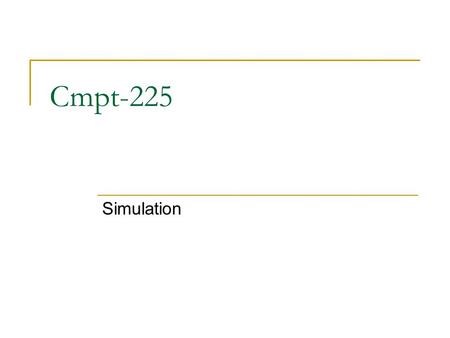 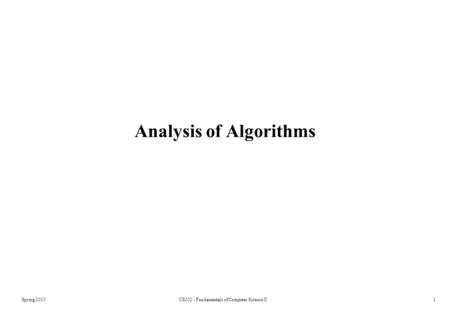 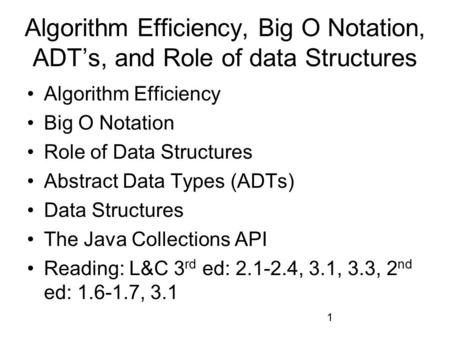 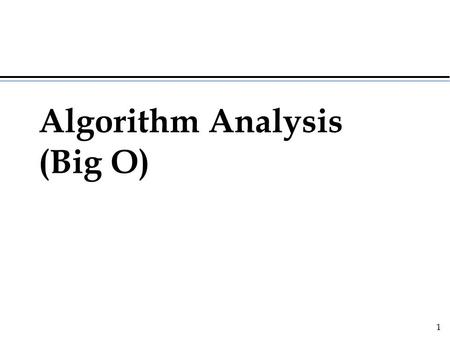