3 2 OSHAct Occupational Safety and Health Act. President Richard M. Nixon signed this bill into law on December 29, 1970, as Public Law No. 91- 596 (29 USC 651-678). The OSHAct, also called the Williams-Steiger Act, took effect on April 28, 1971. Congress declared that the purpose of this legislation was: “…To assure so far as possible every working man and woman in the nation safe and healthful working conditions and preserve our human resources.”

6 5 OSH Act 1970 The intent of the Act is: “…to assure so far as possible every working man and woman in the Nation safe and healthful working conditions and to preserve our human resources.”

7 6 OSH Act of 1970  Created the Occupational Safety and Health Administration (OSHA) within the Department of Labor (DOL) to enforce the OSH Act.  Provides duties and responsibilities to which the employer or employee must comply.

8 7 Who is governed under the OSHAct? Organizations with one or more employees. However, if there are ten or fewer employees, the company is exempt from inspections and record keeping requirements.

9 8 The Act’s Coverage All employers and employees in the 50 states, District of Columbia, Puerto Rico, and all other territories under the Federal Government Jurisdiction Employer- any “person engaged in a business affecting commerce who has employees, but does not include the United States (except for the U.S. Postal Service) or any State or Political Subdivision of a State.”

10 9 OSH Act Does Not Cover Employees of the United States (except for the U.S. Postal Service) or any State or political subdivision of a State Operations where a Federal Agency other than Department of Labor already has authority to prescribe or enforce safety and health standards or regulations.

11 10 OSH Act Does Not Cover Operators and miners covered by the U.S. Mine Safety and Health Act of 1977 Churches and religious organizations Employees performing domestic household tasks in a residence Any person engaged in agriculture who is a member of the farmer’s immediate family

12 11 General Duty Clause – Section 5(a)(1) “Each employer shall furnish to each of his employees employment and a place of employment which are free from recognized hazards that are causing or are likely to cause death or serious physical harm to his employees.”

13 12 OSHA Standards Published in the Code of Federal Regulations, commonly called the CFR. The CFR is divided into Titles, chapters and Parts The Occupational Safety and Health Administration is designated as Title 29

15 14 Responsibility for OSHAct Occupational Safety and Health Administration (OSHA).Assigned to the Department of Labor (DOL). Its authority includes: The promulgation, modification and revocation of safety and health standards. Conducting inspections and investigations and issuing citations. Requiring employers to keep records of safety and health data. Petitioning the courts to issue restraining orders for imminent danger situations. Approving or rejecting state plans for OSH programs.

16 15  OSHA has established 10 regional offices to assist in carrying out its responsibilities. They are located in Boston, New York, Philadelphia, Atlanta, Chicago, Dallas, Kansas City, Denver, San Francisco and Seattle.  In each regional office the regional administrator have the responsibility to supervise, coordinate, evaluate and execute all OSHA Programs in the region.

17 16 Occupational Safety and Health Review Commission (OSHRC). The OSHRC is a quasi-judicial board of three members appointed by the President and confirmed by the Senate. It is an independent agency of the Executive Branch. The sole function of OSHRC is to review and rule on contested cases.  OSHRC may: Affirm. Modify. Vacate OSHA’s findings.  Two levels of adjudication within the OSHRC. Administrative law judges. The three-member commission has the final authority.

22 21 OSHA’s Mission Monitor job-related illnesses and injuries through a system of reporting and record keeping. Establish training programs to increase the number of health and safety professionals and to continually improve their competence. Establish mandatory workplace health and safety standards and enforce those standards.

24 23 Variances from Standards Under certain circumstances an employer may request a variance (deviation) from a particular standard. There are two types of variances - permanent and temporary.

25 24 Reasons for applying for/and the granting of variances include:  The employer is already providing the same level or a higher level of protection to employees than that provided by the standard. Under these circumstances the employer can apply for a permanent variance.  The employer cannot meet the standard due to lack of personnel, equipment, or time to construct or alter facilities. Under these circumstances the employer may apply for a temporary variance. In the application, the employer must state what is being done to protect workers from the specific hazard and how and when the employer expects to be able to come into compliance.

27 26 Questions & Comments Will he actually ask us questions on the exam about this material? 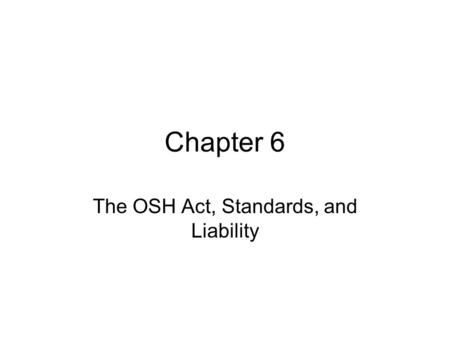 The OSH Act, Standards, and Liability 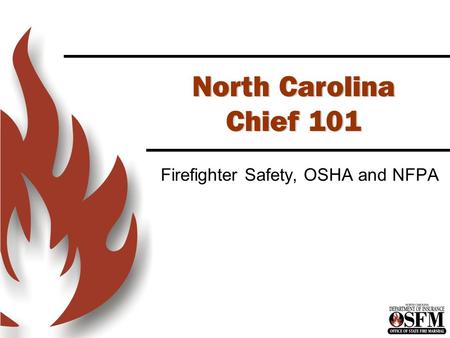 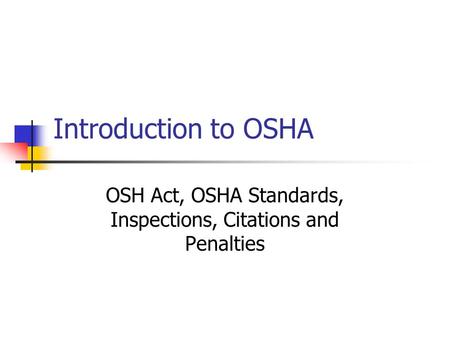 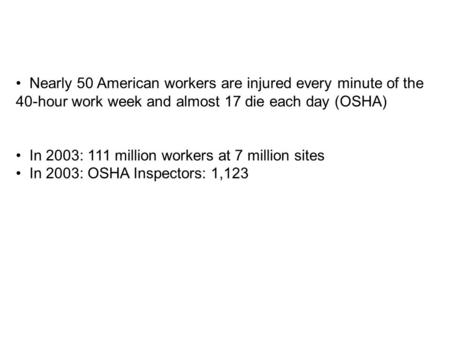 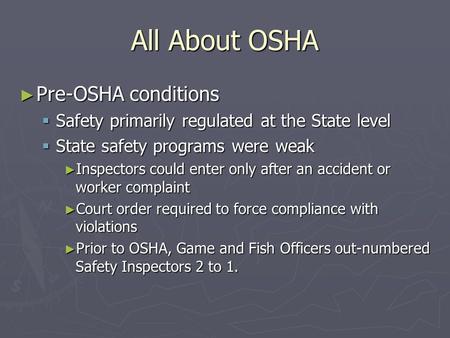 All About OSHA ► Pre-OSHA conditions  Safety primarily regulated at the State level  State safety programs were weak ► Inspectors could enter only after. 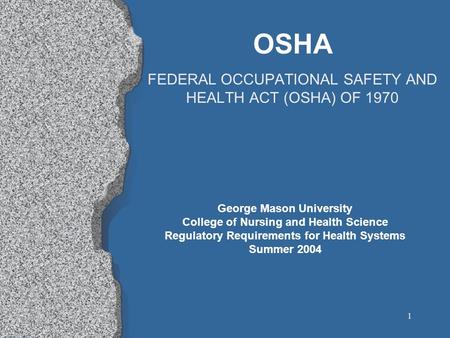 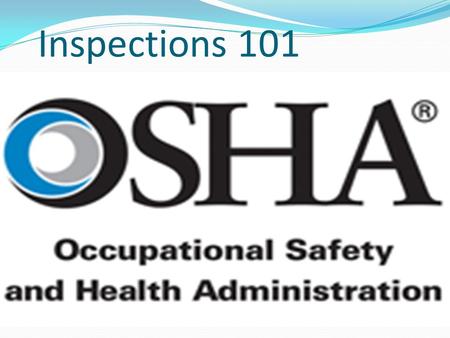 Inspections 101. The OSHA Mission… To assure safe and healthful working conditions for working men and women, by authorizing enforcement of the standards. 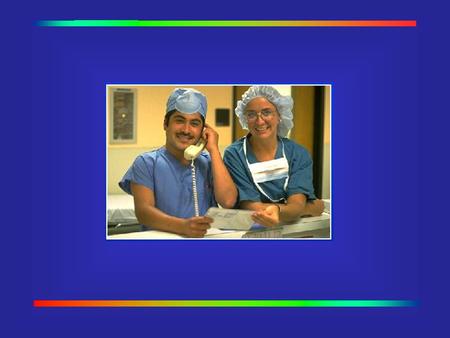 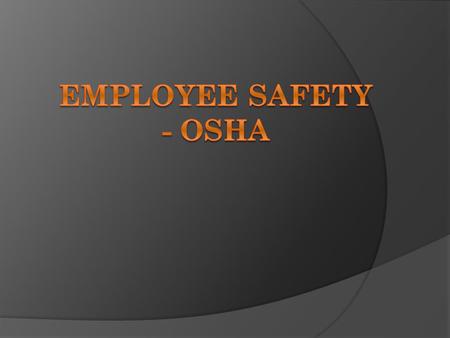 Accident at Quality Surface Processing, Wausau WI  “A new report indicated that some equipment fell into a vat with a hot salt bath, which may have ignited. 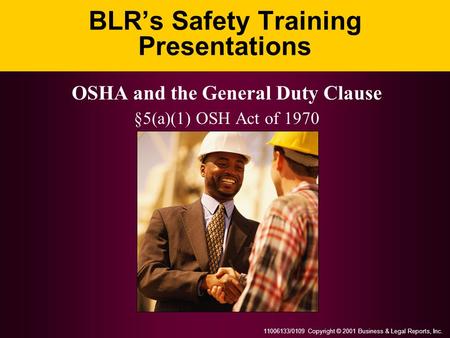 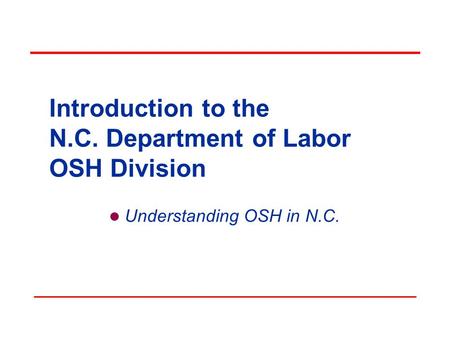 Introduction to the N.C. Department of Labor OSH Division Understanding OSH in N.C. 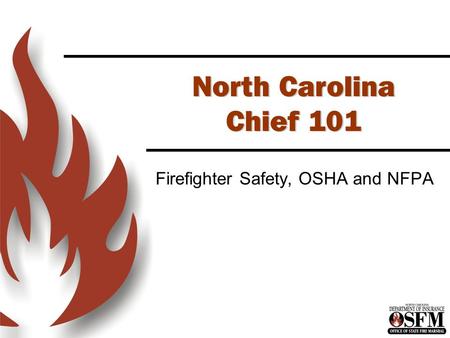 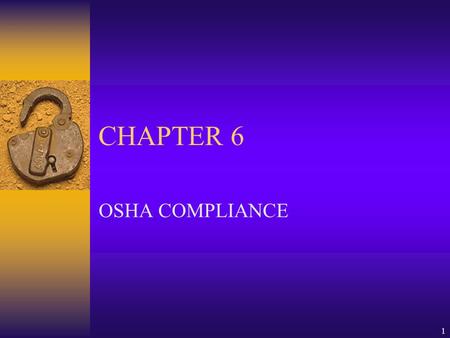 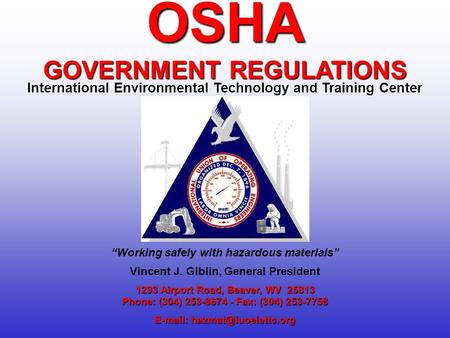 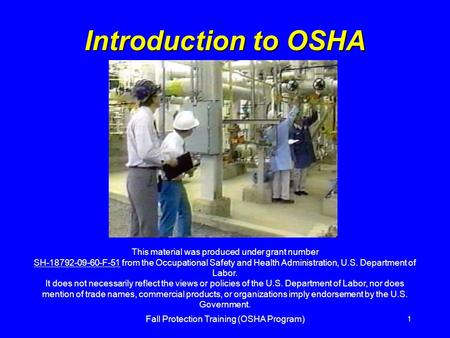 Fall Protection Training (OSHA Program) 1 Introduction to OSHA This material was produced under grant number SH F-51 from the Occupational. 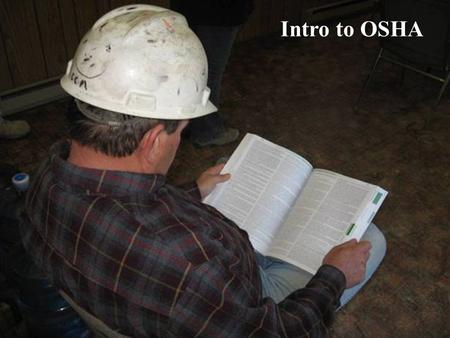 1 Intro to OSHA. Susan Harwood Training Grant This material was produced under grant number SH SH0 from the Occupational Safety and Health Administration, 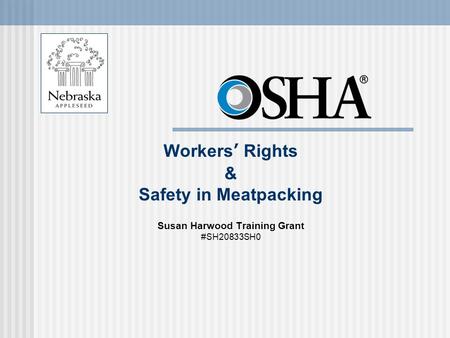 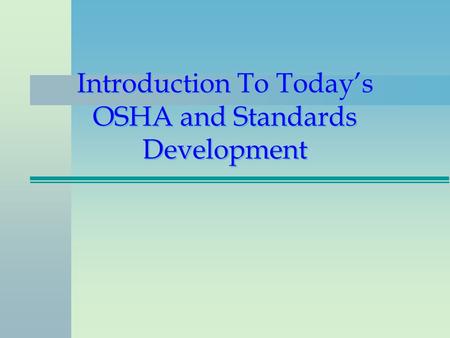 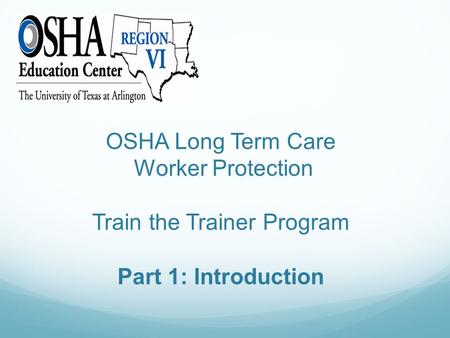 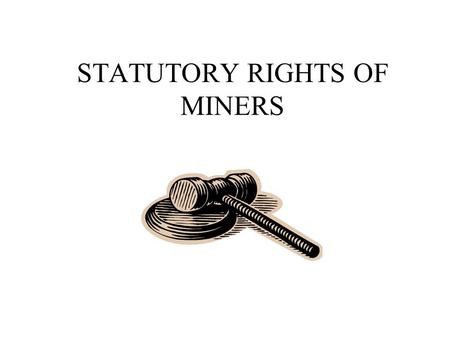 STATUTORY RIGHTS OF MINERS. Section 2 of the Findings and Purpose of the Mine Act contained the following Declarations from Congress: