3 29. 7. 20033 The Electric Flux The electric flux is defined as It represents amount of electric intensity which flows perpendicularly through a surface, characterized by its outer normal vector. The surface must be so small that can be considered constant there. Let’s revisit the scalar product.scalar

4 29. 7. 20034 The Gauss’ Law I Total electric flux through a closed surface is equal to the net charge contained in the volume surrounded by the surface divided by the permitivity of vacuum. It is equivalent to the statement that field lines begin in positive charges and end in negative charges.

5 29. 7. 20035 The Gauss’ Law II Field lines can both begin or end in the infinity. G. L. is roughly because the decrease of intensity the with r 2 in the flux is compensated by the increase with r 2 of surface of the sphere. The scalar product takes care of the mutual orientation of the surface and the intensity.

7 29. 7. 20037 The Gauss’ Law IV Gauss’ law can be taken as the basis of electrostatics as well as Coulomb’s law. It is actually more general! Gauss’ law is useful: for theoretical purposes in cases of a special symmetrysymmetry

8 29. 7. 20038 The Charge Density In real situations we often do not deal with point charges but rather with charged bodies with macroscopic dimensions. Then it is usually convenient to define the charge density i.e. charge per unit volume or surface or length, according to the symmetry of the problem. Since charge density may depend on the position, its use makes sense mainly if the bodies are uniformly charged e.g. conductors in equilibrium.

9 29. 7. 20039 A Point Charge I As a Gaussian surface we choose a spherical surface centered on the charge. Intensity is perpendicular to the spherical surface in every point and so parallel (or antiparallel) to its normal. At the same time E is constant on the surface, so :

11 29. 7. 200311 An Infinite Uniformly Charged Wire I Conductive wire (in equilibrium) must be charged uniformly so we can define the length charge density as charge per unit length: Both Q and L can be infinite, yet have a finite ratio. The wire is axis of the symmetry of the problem.

12 29. 7. 200312 An Infinite Uniformly Charged Wire II Intensity lies in planes perpendicular to the wire and it is radial. As a Gaussian surface we choose a cylindrical surface (of some length L) centered on the wire. Intensity is perpendicular to the surface in every point and so parallel to its normal. At the same time E is constant everywhere on this surface.

13 29. 7. 200313 Infinite Wire III Flux through the flat caps is zero since here the intensity is perpendicular to the normal. So :

14 29. 7. 200314 Infinite Wire IV By making one dimension infinite the intensity decreases ~ 1/r instead of 1/r 2 which was the case of a point charge! Again, we can obtain the same result using the Coulomb’s law and the superposition principle but it is “a little” more difficult!difficult

15 29. 7. 200315 An Infinite Charged Conductive Plane I If the charging is uniform, we can define the surface charge density : Again both Q and A can be infinite yet reach a finite ratio, which is the charge per unit surface. From the symmetry the intensity must be everywhere perpendicular to the surface.

17 29. 7. 200317 Infinite Plane III This time doesn’t change with the distance from the plane. Such a field is called homogeneous or uniform! Note that both magnitude and direction of the vectors must be the same if the vector field should be uniform.

21 The scalar or dot product Let Definition I. (components) Definition II. (projection) Can you proof their equivalence? ^

22 Gauss’ Law The exact definition: In cases of a special symmetry we can find Gaussian surface on which the magnitude E is constant and is everywhere parallel to the surface normal. Then simply: ^

23 Infinite Wire by C.L.– die hard! Only radial component E r of is non-zero We have to substitute all variables using  and integrate from 0 to  : “Quiz”: What was easier? ^ 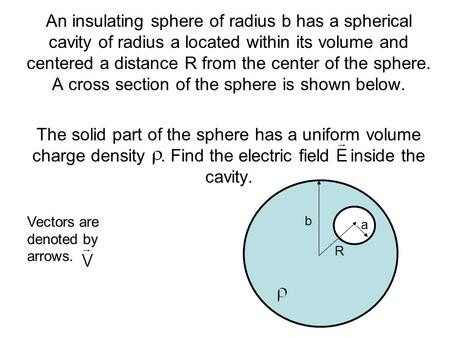 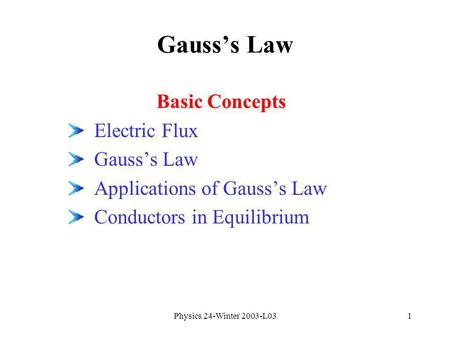 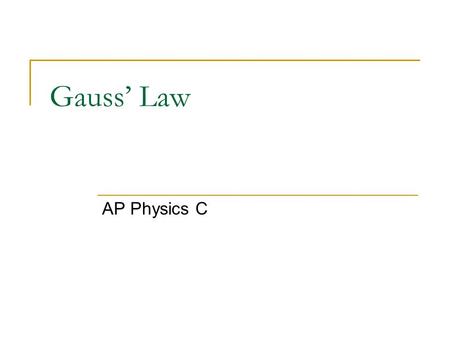 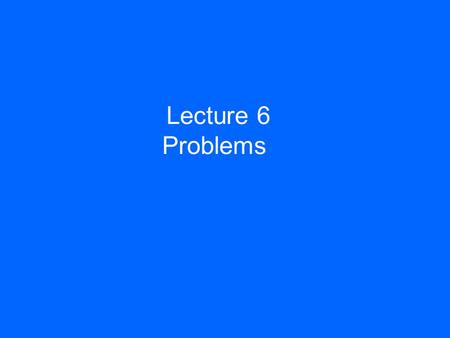 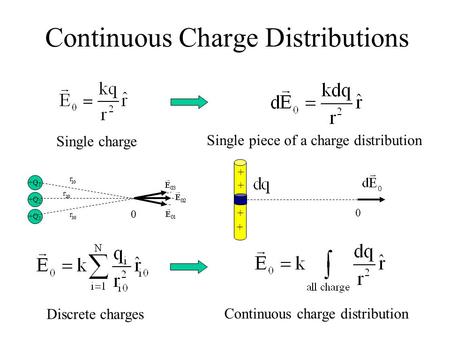 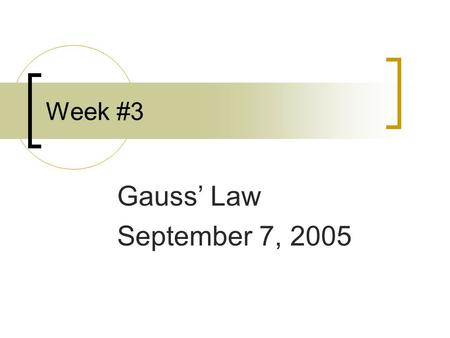 Week #3 Gauss’ Law September 7, What’s up Doc?? At this moment I do not have quiz grades unless I get them at the last minute. There was a short. 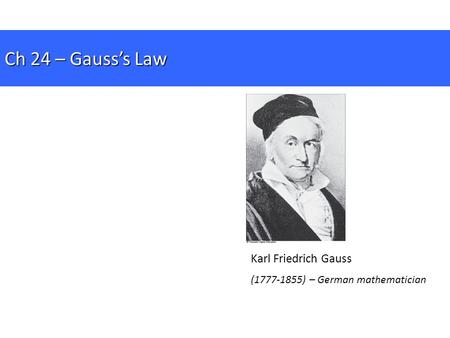 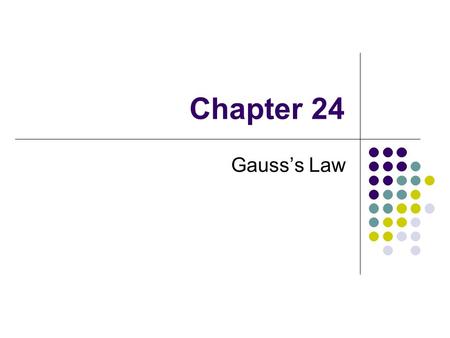 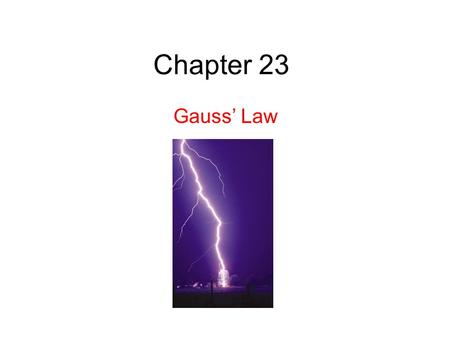 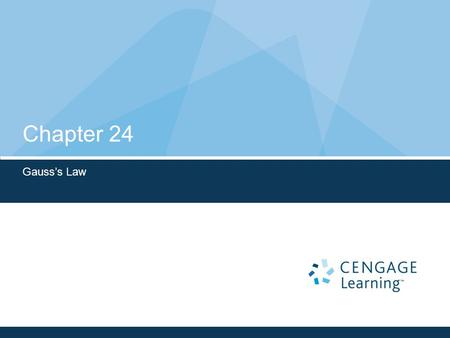 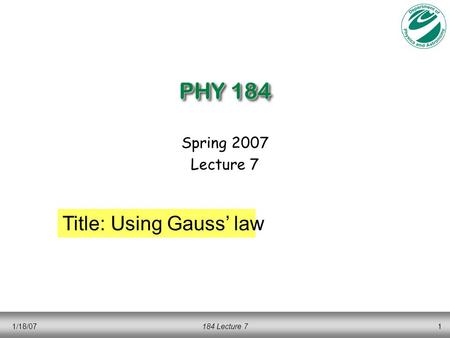 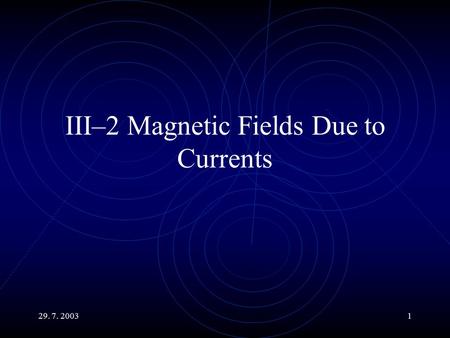 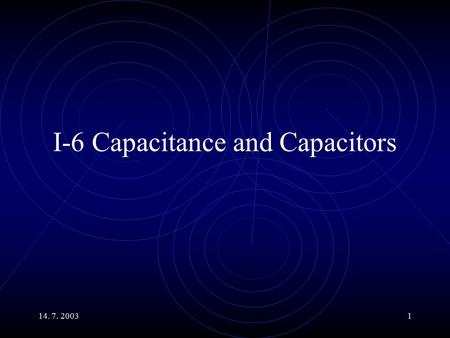 I-6 Capacitance and Capacitors Main Topics An Example of Storing a Charge. Capacity x Voltage = Charge. Various Types of Capacitors. 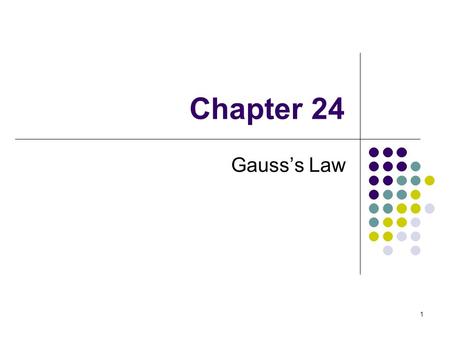 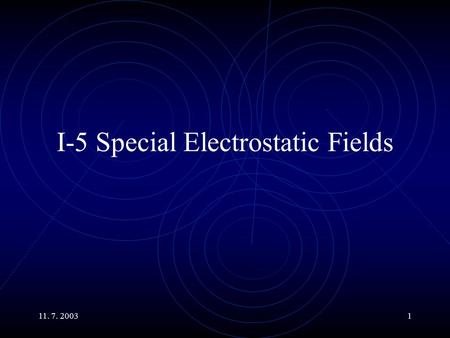 I-5 Special Electrostatic Fields Main Topics Electric Charge and Field in Conductors. The Field of the Electric Dipole. Behavior. 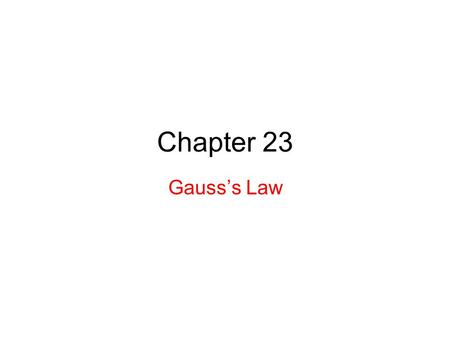 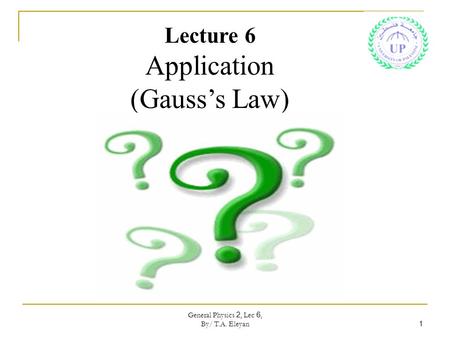 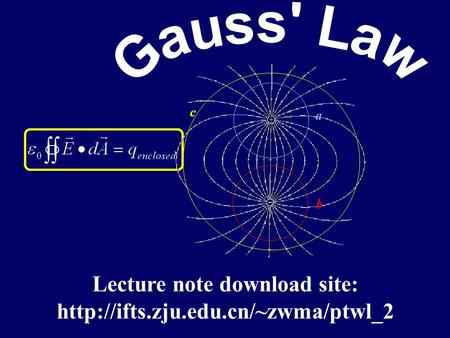 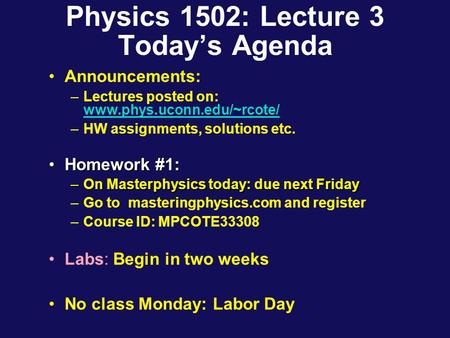 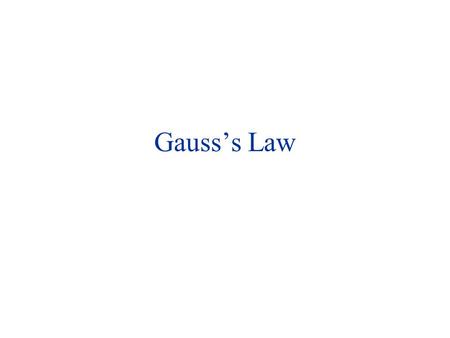