4 Heating or cooling a column of air can establish horizontal variations in pressure that causes the air to move - creates wind.

11 Newton’s 2nd Law of Motion  2nd Law:  F = ma  F: net force; m: mass of object; a: acceleration  At a constant mass, the force acting on the object is directly related to the acceleration that is produced.  The object accelerates in the direction of the net force acting on it  Therefore, to identify which way the wind will blow, we must identify all the forces that affect the movement of air

17 Geostrophic Winds  When the force of PGF and Coriolis are balanced  Travel parallel to isobars at a constant speed  An approximation since isobars are rarely straight in real atmosphere but close enough to understand winds aloft  Spacing of isobars indicates speed  Close = fast, spread out = slow

18 Gradient Winds & Centripetal Force  Gradient wind parallel to curved isobars above the level of frictional influence (winds aloft)  An object accelerates when it is changing speed and/or direction.  Therefore, gradient wind blowing around a low pressure center is constantly accelerating  Centripetal acceleration: directed at right angles to the wind, inward toward center of low  Centripetal force: inward-directed force  Results from an imbalance between the Coriolis force and the PGF

23 Winds & Vertical Motions  Since surface winds blow into the center of a low, they are converging and that air has to go somewhere  slowly rises  Vice versa for winds blowing outward from H  A surface low has convergence at surface and divergence aloft and a surface high has the opposite.  Surface lows tend to be associated with stormy weather, as the rising motion leads to precipitation, while high pressure systems are associated with warmer, drier weather due to the sinking motions

25 Hydrostatic Balance  There is always a strong PGF directed upward  Gravity balances the upward PGF  When they are equal, hydrostatic equilibrium exists  Good approximation for atmosphere with slow vertical movements  Is not valid for violent thunderstorms and tornadoes. 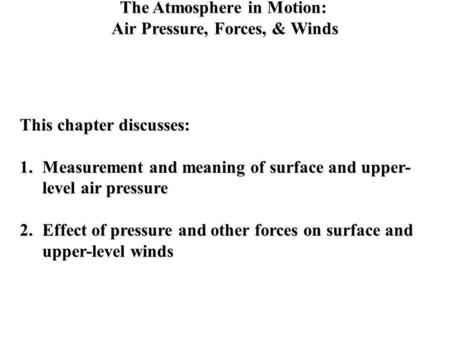 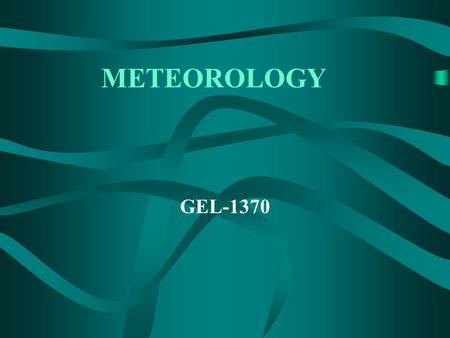 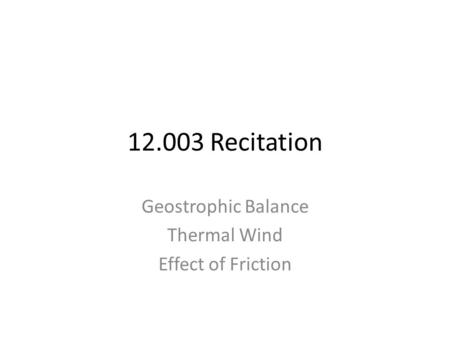