2 Definitions Scatter plot-shows relationship between two quantitative variables measured on the same individuals Explanatory variable-a variable may explain or even cause changes in another Response variable-a variable changes with explanatory variables Scatter plot axis –x axis(explanatory variable), y axis(response variable) Examining a scatter plot – Overall pattern(linear, non-linear, quadratic, etc) and deviations – Overall pattern of scatter plot by form( line, parabola),direction( positive, negative), and strength( strong, weak) of the relationship – An important kind of deviation is an outlier – Positive association(high values of the two variables tend to occur together) – Negative association(high values of one variable tend to occur with low values of the other variable) – Strength-the strength of a relationship is determined by how close the points in the scatter plot lie to simple form such as line

5 Definitions Correlation r- measures the direction and strength of the linear(straight line) association between two quantitative variables x & y You can calculate a correlation for any scatter plot, r measures only linear relationships r>0 ->positive association r negative association r between -1 & 1 including endpoints Perfect correlation, r=+ or – 1 occurs only when the points lie exactly on a straight line Formula for the correlation coefficient between x & y- standard deviation of x= Correlation ignores the distinction between explanatory and response variables Correlation not resistant-outliers can greatly change the value of r

10 Looking at Data-Relationships 2.4 –Cautions about Correlation and Regression

12 Definitions Outlier- An observation that lies outside the overall pattern Influential observations-if removed it would change the result of the calculation Lurking variable: a variable that is not among explanatory or response variables but yet may influence the interpretation of relationships among those variables Association does not imply causation

14 Looking at Data-Relationships 2.6 –The Question of Causation 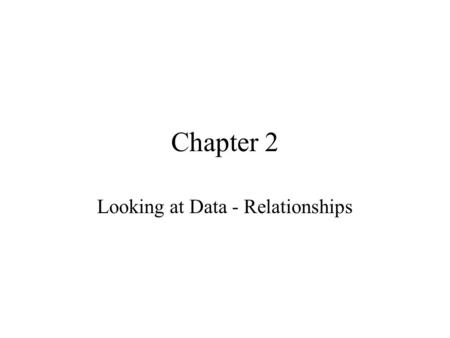