3 3 “Eager” Implementation (Based Primarily on LogTM) A write is made permanent immediately (we do not wait until the end of the transaction) Can’t lose the old value (in case this transaction is aborted) – hence, before the write, we copy the old value into a log (the log is some space in virtual memory -- the log itself may be in cache, so not too expensive) This is eager versioning

4 4 Versioning Every overflowed write first requires a read and a write to log the old value – the log is maintained in virtual memory and will likely be found in cache Aborts are uncommon – typically only when the contention manager kicks in on a potential deadlock; the logs are walked through in reverse order If a block is already marked as being logged (wr-set), the next write by that transaction can avoid the re-log Log writes can be placed in a write buffer to reduce contention for L1 cache ports

5 5 Conflict Detection and Resolution Since Transaction-A’s writes are made permanent rightaway, it is possible that another Transaction-B’s rd/wr miss is re-directed to Tr-A At this point, we detect a conflict (neither transaction has reached its end, hence, eager conflict detection): two transactions handling the same cache line and at least one of them does a write One solution: requester stalls: Tr-A sends a NACK to Tr-B; Tr-B waits and re-tries again; hopefully, Tr-A has committed and can hand off the latest cache line to B  neither transaction needs to abort

6 6 Deadlocks Can lead to deadlocks: each transaction is waiting for the other to finish Need a separate (hw/sw) contention manager to detect such deadlocks and force one of them to abort Tr-A Tr-B write X write Y … … read Y read X Alternatively, every transaction maintains an “age” and a young transaction aborts and re-starts if it is keeping an older transaction waiting and itself receives a nack from an older transaction

7 7 Block Replacement If a block in a transaction’s rd/wr-set is evicted, the data is written back to memory if necessary, but the directory continues to maintain a “sticky” pointer to that node (subsequent requests have to confirm that the transaction has committed before proceeding) The sticky pointers are lazily removed over time (commits continue to be fast)

10 10 A writer has to wait for the reader to finish – but if more readers keep showing up, the writer is starved (note that the directory allows new readers to proceed by just adding them to the list of sharers) VM: any CD: eager CR: requester stalls Pathology 2: Starving Writer

11 11 If there’s a single commit token, transaction commit is serialized There are ways to alleviate this problem VM: lazy CD: lazy CR: any Pathology 3: Serialized Commit

12 12 A transaction is stalling on another transaction that ultimately aborts and takes a while to reinstate old values VM: any CD: eager CR: requester stalls Pathology 4: Futile Stall

14 14 A number of similar (conflicting) transactions execute together – one wins, the others all abort – shortly, these transactions all return and repeat the process VM: lazy CD: lazy CR: committer wins Pathology 6: Restart Convoy

15 15 If two transactions both read the same object and then both decide to write it, a deadlock is created Exacerbated by the Futile Stall pathology Solution? VM: eager CD: eager CR: requester stalls Pathology 7: Dueling Upgrades

16 16 Four Extensions Predictor: predict if the read will soon be followed by a write and acquire write permissions aggressively Hybrid: if a transaction believes it is a Starving Writer, it can force other readers to abort; for everything else, use requester stalls Timestamp: In the EL case, requester wins only if it is the older transaction (handles Friendly Fire pathology) Backoff: in the LL case, aborting transactions invoke exponential back-off to prevent convoy formation 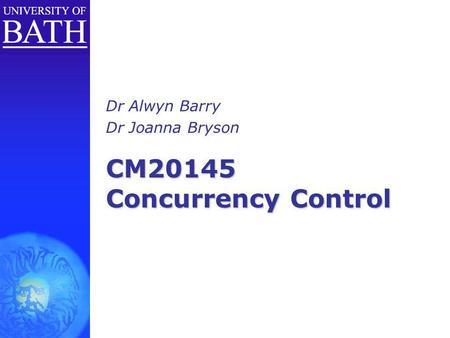 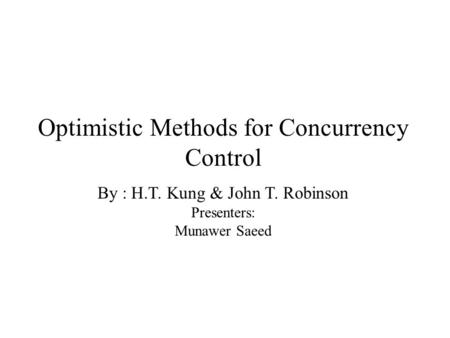 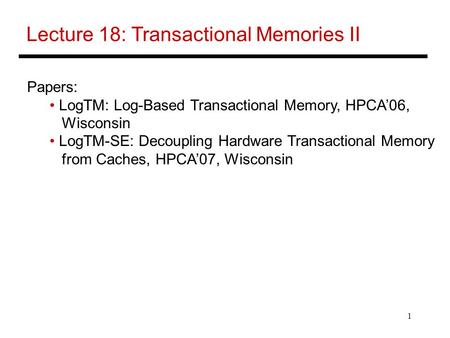 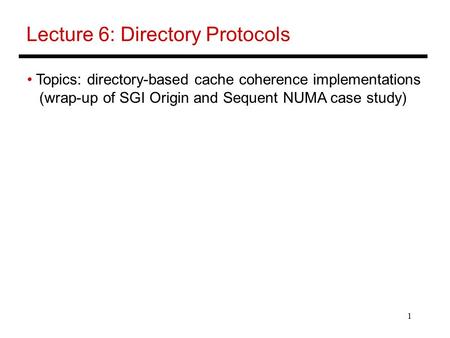 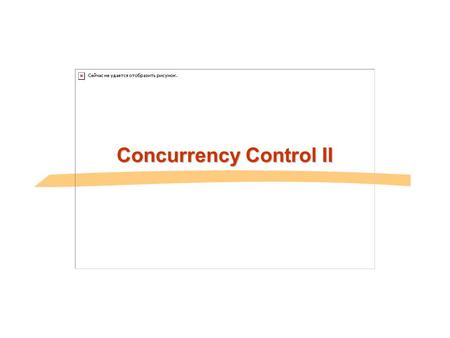 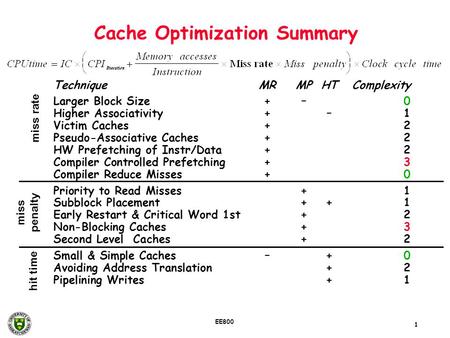 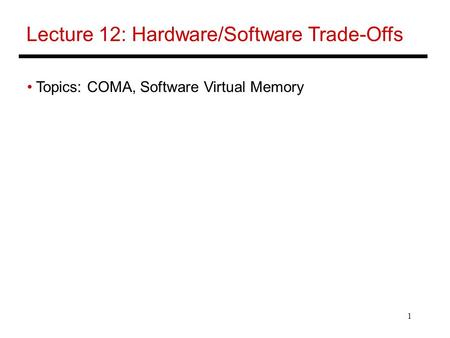 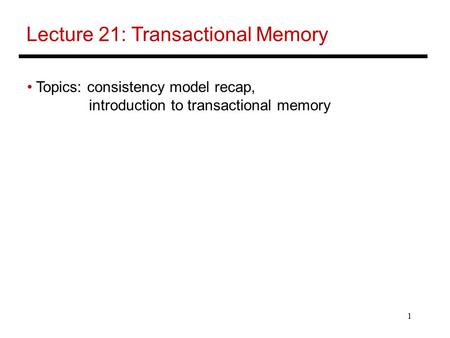 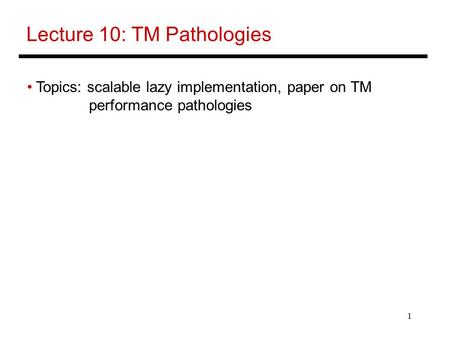 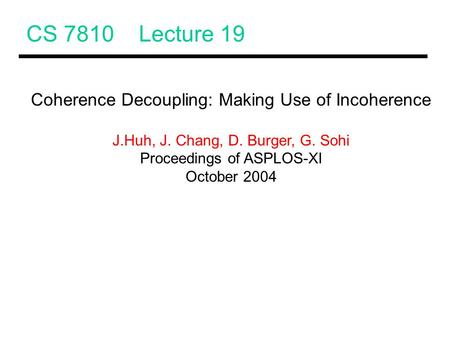 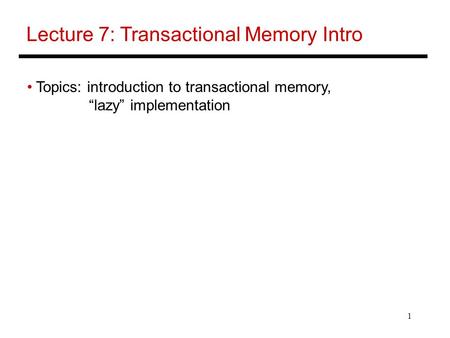 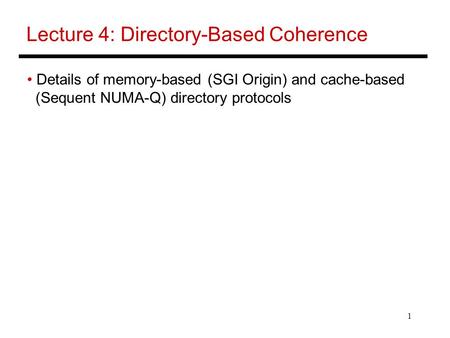 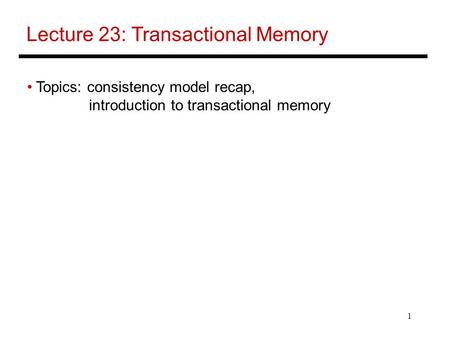 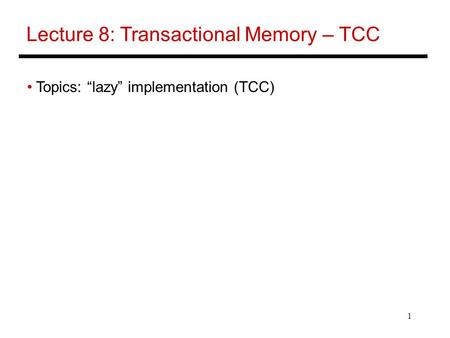 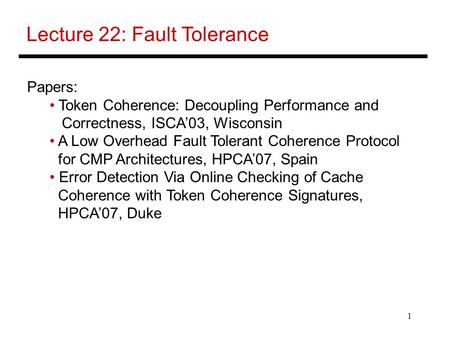 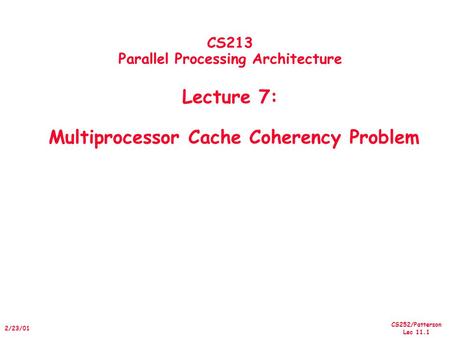 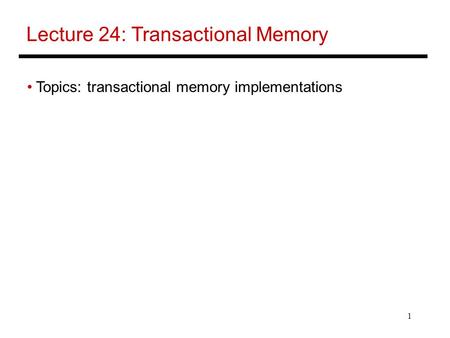 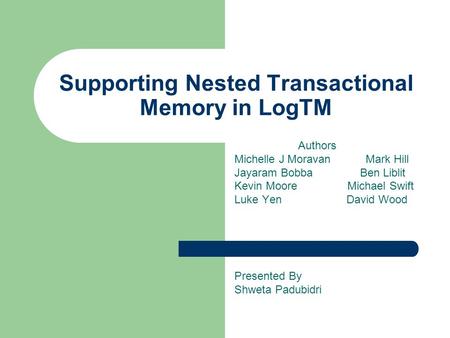 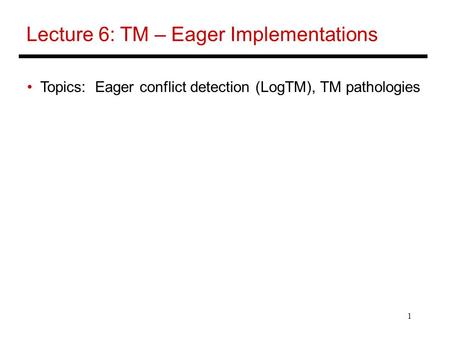