1 LEPP, the Cornell University Laboratory for Elementary-Particle Physics, has joined with CHESS to become the Cornell Laboratory for Accelerator-based Sciences and Education (CLASSE). LEPP's primary source of support is the National Science Foundation. Visit www.lepp.cornell.edu IPAC10—1st International Particle Accelerator Conference, Kyoto, Japan May 23–28, 2010 Progress in Studies of Electron-cloud-induced Optics Distortions at CesrTA J.A.Crittenden, J.R.Calvey, G.Dugan, D.L.Kreinick, Z.Leong, J.A.Livezy, M.A.Palmer, D.L.Rubin, D.C.Sagan (Cornell), K.Harkay (ANL), R.L.Holtzapple (Cal Poly), M.A.Furman, G.Penn, M.Venturini (LBNL), M.T.F.Pivi and L.Wang (SLAC) The Cornell Electron Storage Ring Test Accelerator (CesrTA) program has included extensive measurements of coherent tune shifts for a variety of electron and positron beam energies, bunch population levels, and bunch train configurations. The tune shifts have been shown to result primarily from the interaction of the beam with the space-charge field of the beam-induced low-energy electron cloud in the vacuum chamber. Comparison to several advanced electron cloud simulation codes has allowed determination of the sensitivity of these measurements to physical parameters characterizing the synchrotron radiation flux, photo- electron production on the vacuum chamber wall, the beam emittance and lattice optics, and the secondary-electron yield model. We report on progress in understanding the cloud buildup and decay mechanisms in magnetic fields and in field-free regions, addressing quantitatively the precise determination of the physical parameters of the modelling. Validation of these models will serve as essential input in the design of damping rings for future high-energy linear colliders. I.ECLOUD and POSINST cloud simulation input parameters 1.Sync rad photon rate per meter per beam particle at primary source point (2009 2.1GeV: Drift R=0.28g/m/e, Dipole R=0.55 g/m/e) 2.Quantum efficiency for producing photo-electrons on the vacuum chamber wall (12%) 3.Beam particles per bunch (0.75-1.3 mA/bunch -> 1.2-2.1e10 e/bunch). 4.Contribution of reflected sync rad photons distributed uniformly in azimuth around the beampipe wall (15%). This contribution is also subtracted from the primary source point. 5.Secondary emission peak yield (Total SEY=2.0) at peak energy (E peak = 310 eV) ● The relative weighting of the true secondary, re-diffused, and elastic contributions differs in ECLOUD and POSINST II. Field difference or gradient --> tune shift conversion parameters 1.E beam = 1.9, 2.1, 4.0, 5.3 GeV 2.f rev = 390 kHz 3.Ring circumference C=768 m (C f rev = c = 2.998e8 m/s) 4. Ring-averaged b values (from sync rad summary tables derived from lattice model, here for the 2.1 GeV lattice) ● e+ beam: Drift b X (b Y ) = 16.1m (17.7m), Dipole b X (b Y ) = 14.1m (18.6m) III. Relative drift/dipole weighting (from sync rad summary tables) 1.Ring length fractions: Drift: (174.9m/768m) = 0.228, Dipole: (473.9m/768m) = 0.617. Remaining 15% of ring ignored. Modeling Coherent Tune Shift Measurements Using ECLOUD and POSINST Cloud Simulation Codes The CESR Tunnel under the Cornell Campus Drift Region Snapshots of cloud profiles prior to the passage of the 9 th bunch consecutive filled bunch Magnetic Dipole Region February 2009 2.1 GeV 0.4 mA/bunch February 2009 2.1 GeV 0.8 mA/bunch March 2010 4.0 GeV 1.3 mA/bunch Comparison of the measured and simulated horizontal and vertical tune shifts along a 45-bunch train of 2.1 GeV positrons spaced by 14 ns. The bunch population is 6.4E9. The tunes were measured using a coherent kick to the train, resulting in the suppression of the horizontal tune shift in the dipoles. The magnitude and time dependence of the vertical tune shifts are well described by the ECLOUD and POSINST simulations, which include only contributions from the dipole regions, covering 62% of the ring, and the drift regions, which cover 23% of the ring. The simulations show that the larger contribution to the vertical tune shifts comes from the field-free regions of the ring for this bunch population. The dipole contribution rises approximately linearly along the train, reaching a value comparable to the drift contribution at the 45th bunch. The relative contributions to the vertical tune shift of the field-free and dipole regions of the ring depend strongly on the bunch population as shown above, where the measurements were taken under identical conditions, but for a doubled bunch population of 1.28E10. Here the dipole contribution dominates from the first few bunches in the train, resulting in the characteristic linear rise of the vertical tune shift. The beam kicks on the cloud electrons are strong enough for this bunch population that the secondary yield on the top and bottom of the vacuum chamber in the vertical plane containing the beam now dominate the vertical space-charge field gradients. The re-diffused component in the secondary yield model is essential under these conditions. If it is omitted, the simulated dipole contribution to the vertical tune shift saturates at a level about half of the tune shift of the 45th bunch. Recently we have made measurements using the self-excitation of the 45 bunches in a 14-ns-spaced train of 4.0 GeV positrons. This relatively uncontrolled method of measuring the tunes results in a signicant scatter in the results. This higher bunch population of 2.1E10 is of particular relevance, since it is similar to the value proposed for the ILC damping rings. Since there is no coherent oscillation of the entire train, the horizontal tune shifts are not suppressed in the dipole magnets and, indeed, exceed the vertical tune shifts, reaching values of 5 kHz. In addition, the measurements show a qualitatively different behavior, as a saturation effect is observed. The POSINST and ECLOUD codes approximately model this new effect, indicating that the secondary yield model is appropriate also under these conditions. The CesrTA project will maintain a vigorous and variegated measurement program throughout the coming year. Solenoid windings have been installed in most of the field-free regions of the ring and experimental studies of their effects on the electron cloud buildup and tune shifts will begin soon. Additional instrumentation under development such as X-ray-based beam size monitors and turn-by-turn orbit measurement capability throughout the ring will provide useful information. Measurement methods, such as the excitation of individual bunches along a train, and techniques to determine single-bunch instability thresholds, are being improved. The simulation tools continue to be actively developed as well. The measurements and analysis of the past two years constitute substantial progress on understanding the physics of electron cloud buildup and its limiting effects on the performance of damping rings. 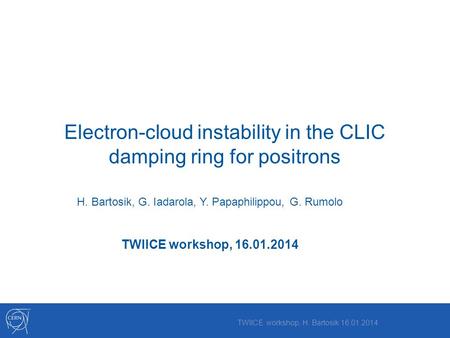 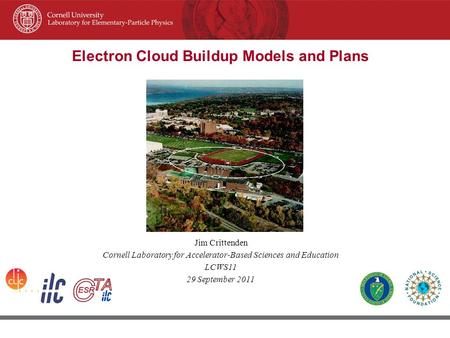 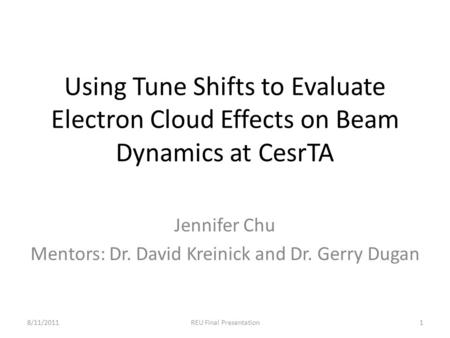 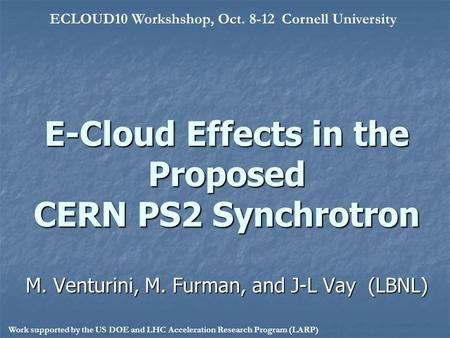 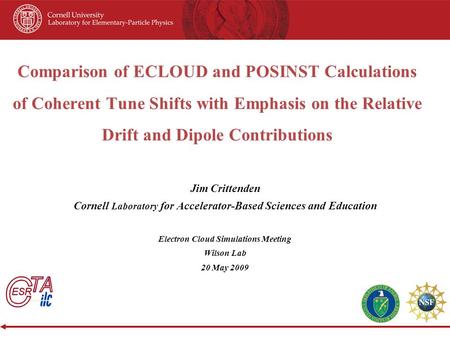 Comparison of ECLOUD and POSINST Calculations of Coherent Tune Shifts with Emphasis on the Relative Drift and Dipole Contributions Jim Crittenden Cornell. 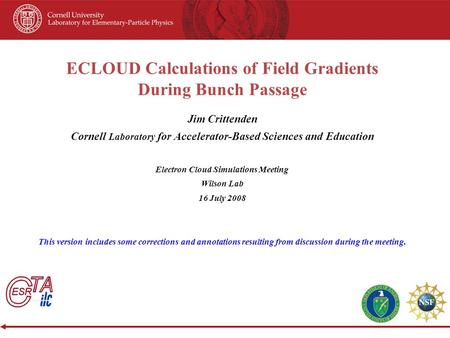 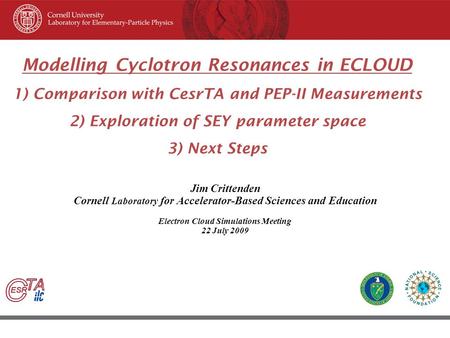 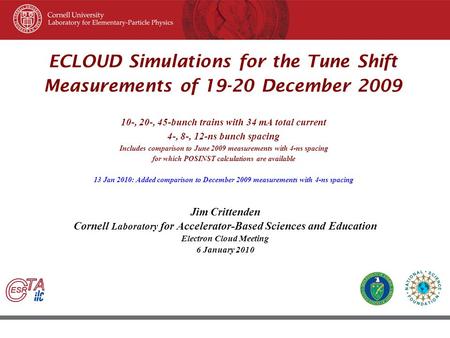 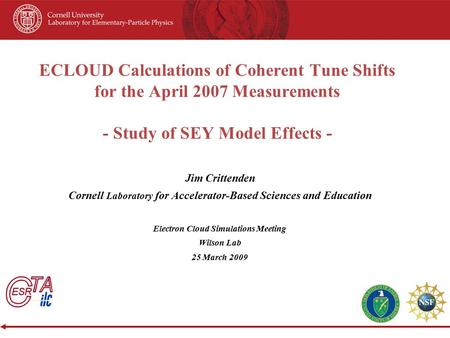 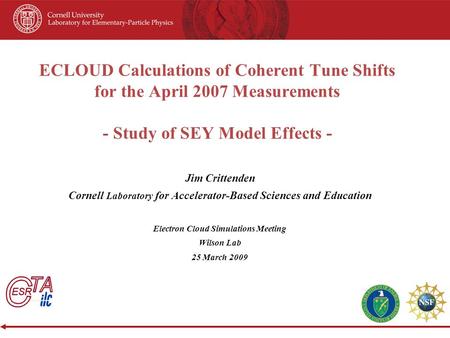 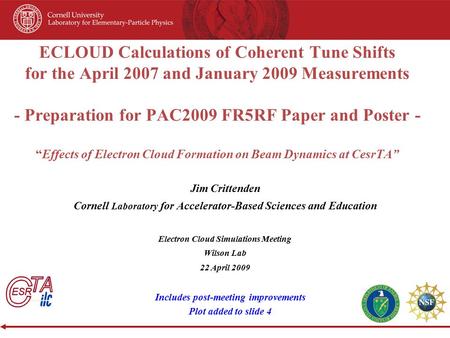 ECLOUD Calculations of Coherent Tune Shifts for the April 2007 and January 2009 Measurements - Preparation for PAC2009 FR5RF Paper and Poster - “Effects. 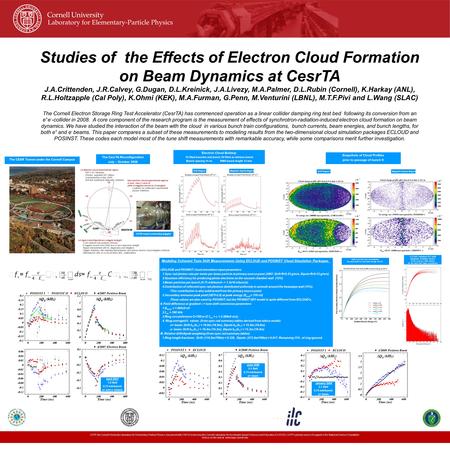 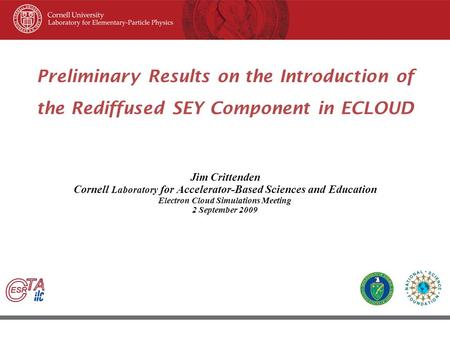 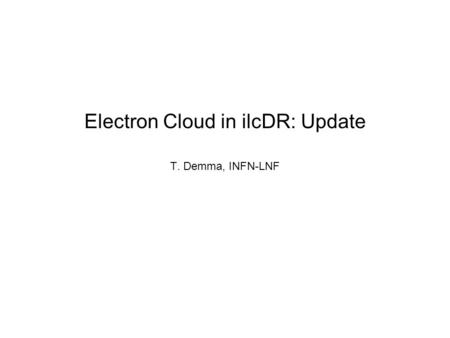 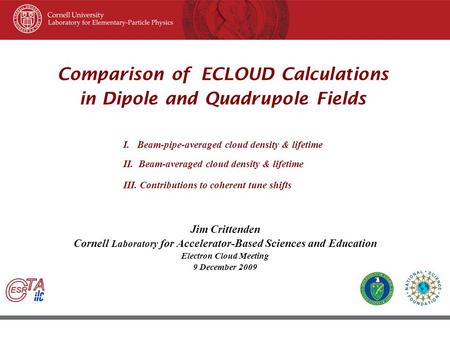 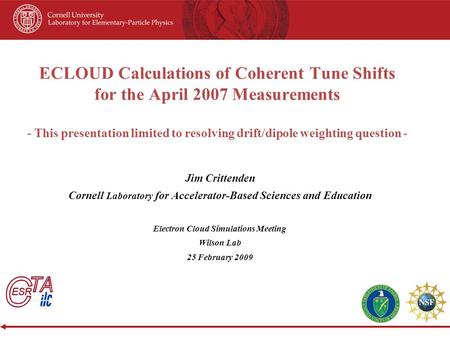 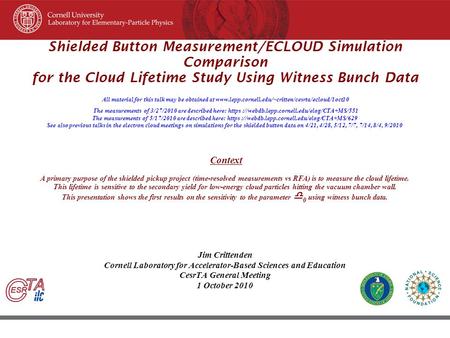 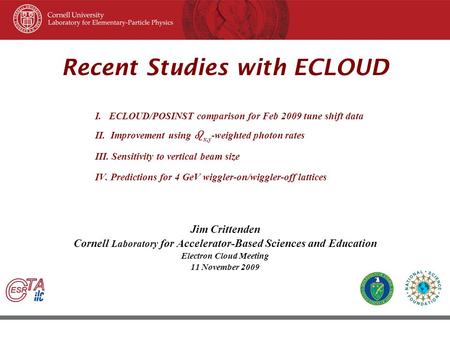 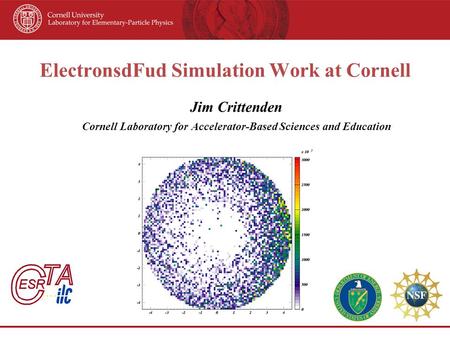 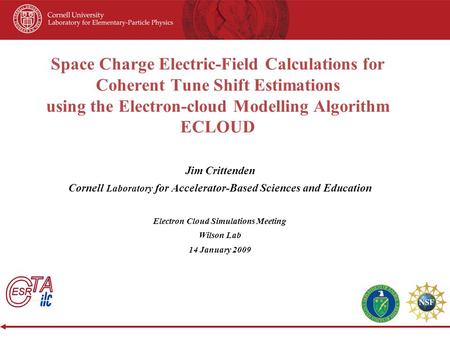