1 Ch 7.9: Nonhomogeneous Linear Systems
The general theory of a nonhomogeneous system of equations parallels that of a single nth order linear equation. This system can be written as x' = P(t)x + g(t), where

4 Solving Diagonal System
Now y' = Dy + h(t) is a diagonal system of the form where r1,…, rn are the eigenvalues of A. Thus y' = Dy + h(t) is an uncoupled system of n linear first order equations in the unknowns yk(t), which can be isolated and solved separately, using methods of Section 2.1:

5 Solving Original System
The solution y to y' = Dy + h(t) has components For this solution vector y, the solution to the original system x' = Ax + g(t) is then x = Ty. Recall that T is the nonsingular transform matrix whose columns are the eigenvectors of A. Thus, when multiplied by T, the second term on right side of yk produces general solution of homogeneous equation, while the integral term of yk produces a particular solution of nonhomogeneous system.

6 Example 1: General Solution of Homogeneous Case (1 of 5)
Consider the nonhomogeneous system x' = Ax + g below. Note: A is a Hermitian matrix, since it is real and symmetric. The eigenvalues of A are r1 = -3 and r2 = -1, with corresponding eigenvectors The general solution of the homogeneous system is then

9 Example 1: Transform Back to Original System (4 of 5)
We next use the transformation x = Ty to obtain the solution to the original system x' = Ax + g(t):

11 Nondiagonal Case If A cannot be diagonalized, (repeated eigenvalues and a shortage of eigenvectors), then it can be transformed to its Jordan form J, which is nearly diagonal. In this case the differential equations are not totally uncoupled, because some rows of J have two nonzero entries: an eigenvalue in diagonal position, and a 1 in adjacent position to the right of diagonal position. However, the equations for y1,…, yn can still be solved consecutively, starting with yn. Then the solution x to original system can be found using x = Ty.

12 Undetermined Coefficients
A second way of solving x' = P(t)x + g(t) is the method of undetermined coefficients. Assume P is a constant matrix, and that the components of g are polynomial, exponential or sinusoidal functions, or sums or products of these. The procedure for choosing the form of solution is usually directly analogous to that given in Section 3.6. The main difference arises when g(t) has the form uet, where  is a simple eigenvalue of P. In this case, g(t) matches solution form of homogeneous system x' = P(t)x, and as a result, it is necessary to take nonhomogeneous solution to be of the form atet + bet. This form differs from the Section 3.6 analog, atet.

13 Example 2: Undetermined Coefficients (1 of 5)
Consider again the nonhomogeneous system x' = Ax + g: Assume a particular solution of the form where the vector coefficents a, b, c, d are to be determined. Since r = -1 is an eigenvalue of A, it is necessary to include both ate-t and be-t, as mentioned on the previous slide.

14 Example 2: Matrix Equations for Coefficients (2 of 5)
Substituting in for x in our nonhomogeneous system x' = Ax + g, we obtain Equating coefficients, we conclude that

15 Example 2: Solving Matrix Equation for a (3 of 5)
Our matrix equations for the coefficients are: From the first equation, we see that a is an eigenvector of A corresponding to eigenvalue r = -1, and hence has the form We will see on the next slide that  = 1, and hence

16 Example 2: Solving Matrix Equation for b (4 of 5)
Our matrix equations for the coefficients are: Substituting aT = (,) into second equation, Thus  = 1, and solving for b, we obtain

17 Example 2: Particular Solution (5 of 5)
Our matrix equations for the coefficients are: Solving third equation for c, and then fourth equation for d, it is straightforward to obtain cT = (1, 2), dT = (-4/3, -5/3). Thus our particular solution of x' = Ax + g is Comparing this to the result obtained in Example 1, we see that both particular solutions would be the same if we had chosen k = ½ for b on previous slide, instead of k = 0.

18 Variation of Parameters: Preliminaries
A more general way of solving x' = P(t)x + g(t) is the method of variation of parameters. Assume P(t) and g(t) are continuous on  < t < , and let (t) be a fundamental matrix for the homogeneous system. Recall that the columns of  are linearly independent solutions of x' = P(t)x, and hence (t) is invertible on the interval  < t < , and also '(t) = P(t)(t). Next, recall that the solution of the homogeneous system can be expressed as x = (t)c. Analogous to Section 3.7, assume the particular solution of the nonhomogeneous system has the form x = (t)u(t), where u(t) is a vector to be found.

20 Variation of Parameters: Initial Value Problem
For an initial value problem x' = P(t)x + g(t), x(t0) = x(0), the general solution to x' = P(t)x + g(t) is Alternatively, recall that the fundamental matrix (t) satisfies (t0) = I, and hence the general solution is In practice, it may be easier to row reduce matrices and solve necessary equations than to compute -1(t) and substitute into equations. See next example.

21 Example 3: Variation of Parameters (1 of 3)
Consider again the nonhomogeneous system x' = Ax + g: We have previously found general solution to homogeneous case, with corresponding fundamental matrix: Using variation of parameters method, our solution is given by x = (t)u(t), where u(t) satisfies (t)u'(t) = g(t), or

24 Laplace Transforms The Laplace transform can be used to solve systems of equations. Here, the transform of a vector is the vector of component transforms, denoted by X(s): Then by extending Theorem 6.2.1, we obtain

25 Example 4: Laplace Transform (1 of 5)
Consider again the nonhomogeneous system x' = Ax + g: Taking the Laplace transform of each term, we obtain where G(s) is the transform of g(t), and is given by

29 Example 4: Transfer Matrix (5 of 5)
Thus To solve for x(t) = L-1{X(s)}, use partial fraction expansions of both components of X(s), and then Table to obtain: Since we assumed x(0) = 0, this solution differs slightly from the previous particular solutions.

30 Summary (1 of 2) The method of undetermined coefficients requires no integration but is limited in scope and may involve several sets of algebraic equations. Diagonalization requires finding inverse of transformation matrix and solving uncoupled first order linear equations. When coefficient matrix is Hermitian, the inverse of transformation matrix can be found without calculation, which is very helpful for large systems. The Laplace transform method involves matrix inversion, matrix multiplication, and inverse transforms. This method is particularly useful for problems with discontinuous or impulsive forcing functions.

31 Summary (2 of 2) Variation of parameters is the most general method, but it involves solving linear algebraic equations with variable coefficients, integration, and matrix multiplication, and hence may be the most computationally complicated method. For many small systems with constant coefficients, all of these methods work well, and there may be little reason to select one over another. 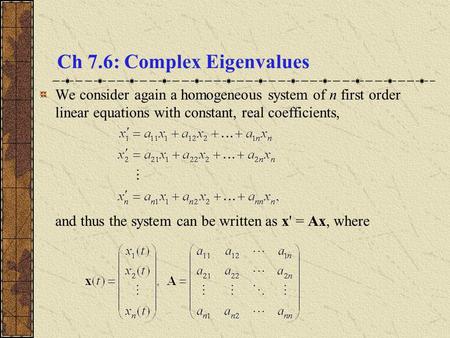 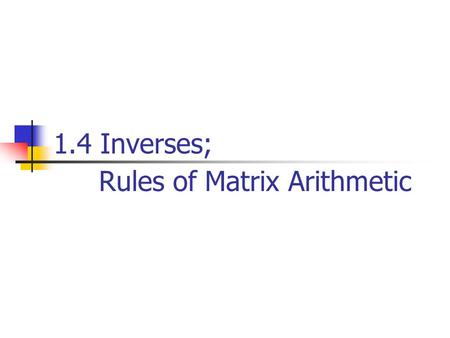 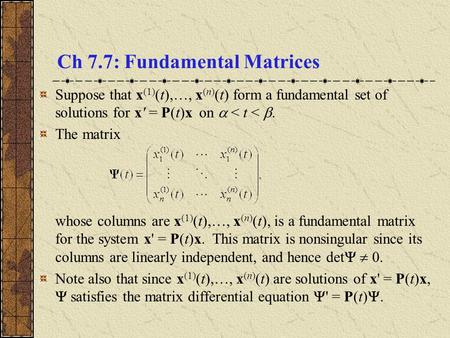 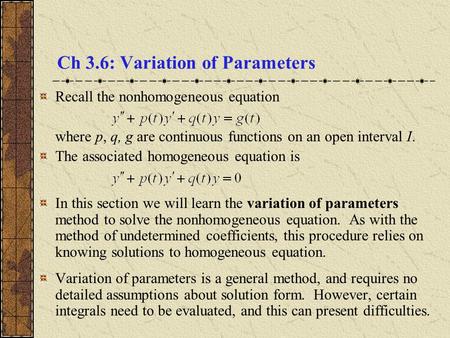 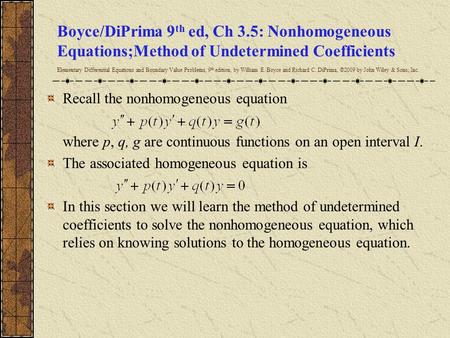 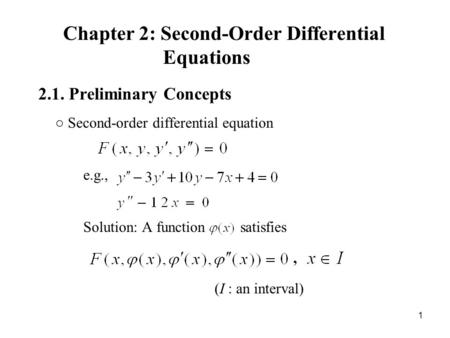 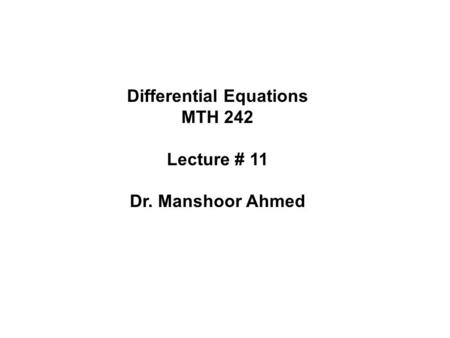 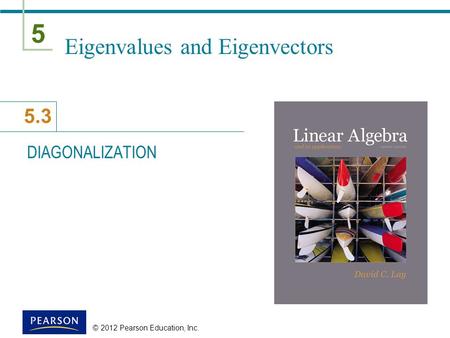 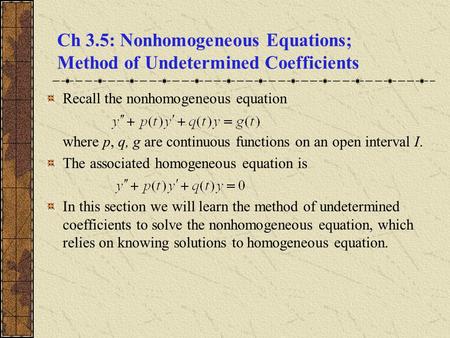 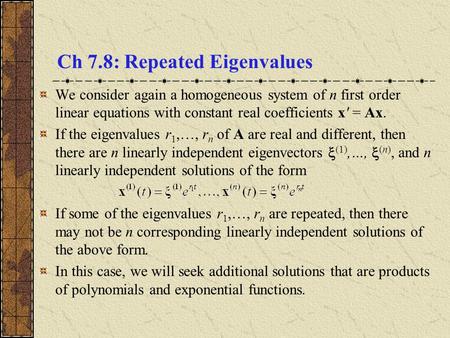 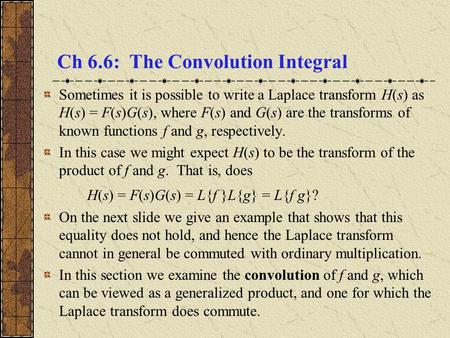 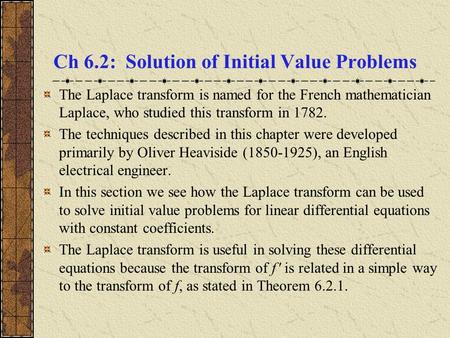 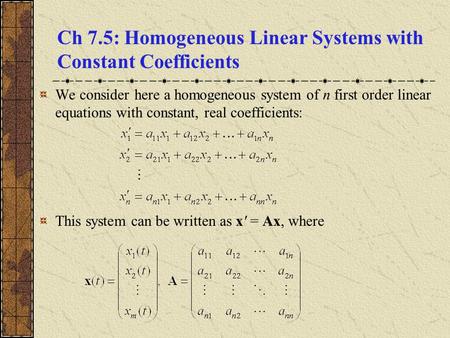 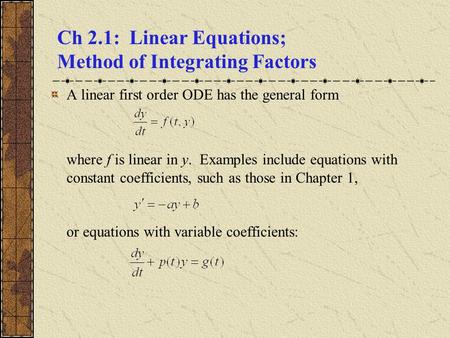 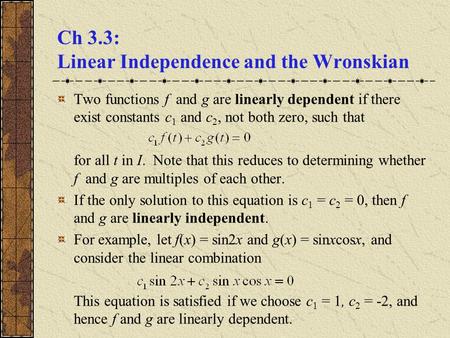 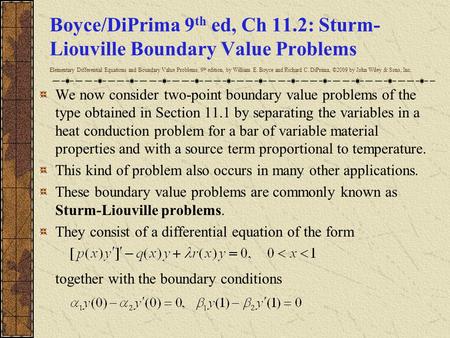