2 Limited Energy Sources  Fossil Fuels –Coal: one of the first fossil fuel to be used widely during industrial revolution –Strip mining is used in which wide and deep holes are dug. These hole must be refilled in order to reduce effects of erosion etc. –Problem with coal is its transportation and it gives of sulfur dioxide during burning. –A new way to transport coal is to transport it through pipe lines in the form of slurry –Oil or ‘black gold’ is another fossil fuel. From it more fuels like gasoline and jet fuel can be prepared –Natural gas: it is used mainly for heating and cooking

8 Unlimited Energy Sources  Wind Energy –The sun’s unequal heating of earth –Wind powered boats and pumps have been used until the steam engine was invented –Today the wind is used to generate electricity –Disadvantages : cannot operate when the wind blow is not at a certain speed, large wind-powered generators are noisy  Gravitational Energy –The energy of falling water is used to run today’s version of water wheel, the turbine --- hydroelectricity –Tidal energy is being used experimentally to make electricity

10 Unlimited Energy Sources  Geothermal Energy –The earth’s center is a hot molten core –At 3 miles below the surface of the earth, the temperature is around 600 o F –Earth geysers  Fusion –Another way of changing matter into energy –Huge amount of energy is released when the nuclei of two atoms are forced together –The fusion of two atoms requires a temperature of over 100 million degrees F –Fusion power plants will use deuterium and tritium as fuel 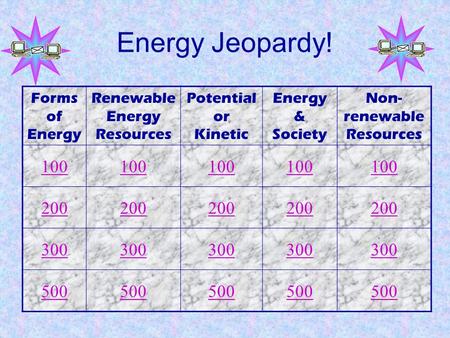