Presentation on theme: "11-Jun-15 Just Enough Java. 2 What is Java? Java is a programming language: a language that you can learn to write, and the computer can be made to understand."— Presentation transcript:

2 2 What is Java? Java is a programming language: a language that you can learn to write, and the computer can be made to understand Java is currently a very popular language Java is a large, powerful language but it is not simple! Compared to C++, Java is elegant

4 4 Java structure and Eclipse A workspace is where Eclipse keeps projects When you use Eclipse to create a project (a single “program”), it creates a directory with that name in your workspace When you use Eclipse to create a class, it creates a file in the project directory that has the same name as the class When you create a class and don’t specify a “package” name, Eclipse complains The use of the default package is discouraged. Ignore this message for now.

5 5 Very simple program outline Notes: The class name ( MyClass ) must begin with a capital main is a method class MyClass { public static void main(String[ ] args) { // some declarations and statements go here // this is the part we will talk about today } main method

6 6 Syntax and semantics Syntax is the “grammar” of the language The syntax of Java is large, but finite Syntax must be absolutely correct The computer will point out every syntax error Error messages may be helpful or misleading Semantics is the “meaning” of your program Semantic errors cause your answers to be wrong You may or may not get error messages

11 11 Declaring variables Every variable that you use in a program must be declared (in a declaration) The declaration specifies the type of the variable The declaration may give the variable an initial value Examples: int age; int count = 0; double distance = 37.95; boolean isReadOnly = true; String greeting = "Welcome to CIT 591"; String outputLine;

13 13 One-line comments A comment is a note to any human reading the program; comments are ignored by Java A single-line comment starts with // and goes to the end of the line A comment may be put after a statement (on the same line) to say something about that one statement A comment may be put on a line by itself, to say something about the following statements Example: // Swap the values of x and y temp = x; // save old value of x in temp x = y; // replace old value of x with y y = temp; // this many comments is just silly

19 19 String concatenation You can concatenate (join together) Strings with the + operator Example: fullName = firstName + " " + lastName; In fact, you can concatenate any value with a String and that value will automatically be turned into a String Example: System.out.println("There are " + count + " apples."); Be careful, because + also still means addition int x = 3; int y = 5; System.out.println(x + y + " != " + x + y); The above prints 8 != 35 “Addition” is done left to right--use parentheses to change the order

Download ppt "11-Jun-15 Just Enough Java. 2 What is Java? Java is a programming language: a language that you can learn to write, and the computer can be made to understand." 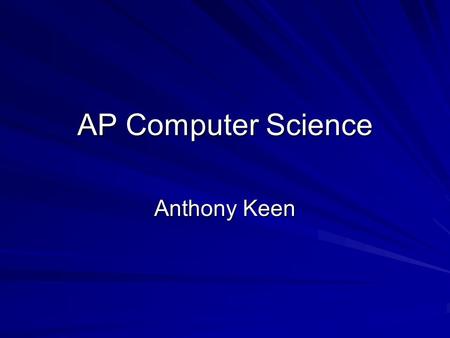 AP Computer Science Anthony Keen. Computer 101 What happens when you turn a computer on? –BIOS tries to start a system loader –A system loader tries to. 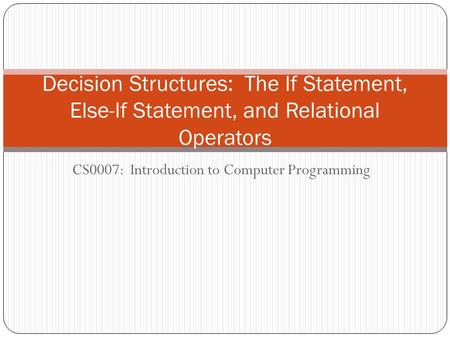 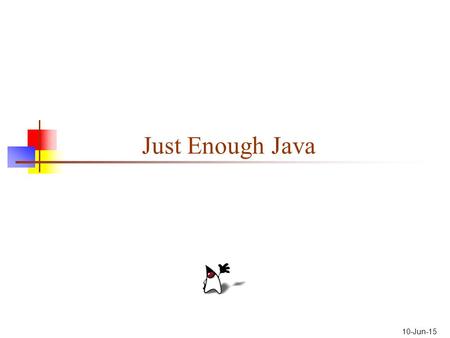 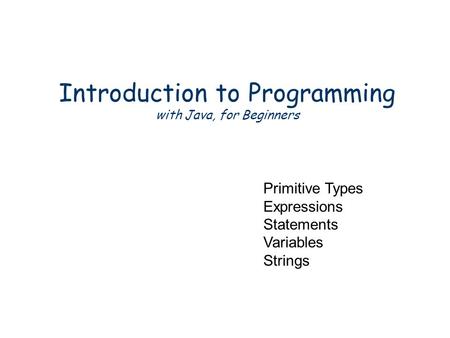 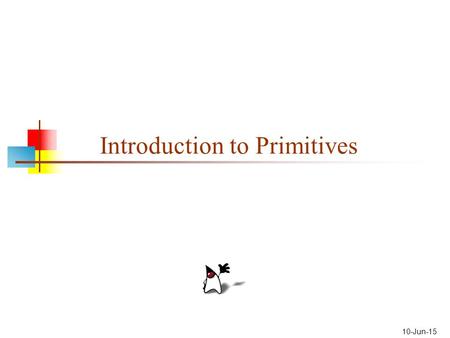 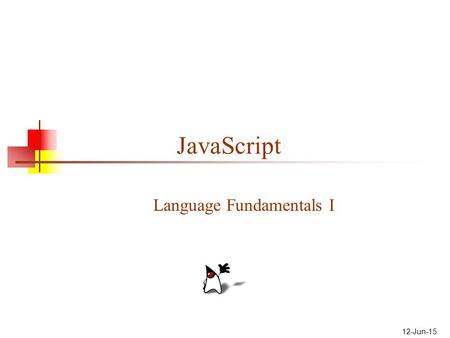 12-Jun-15 JavaScript Language Fundamentals I. 2 About JavaScript JavaScript is not Java, or even related to Java The original name for JavaScript was. 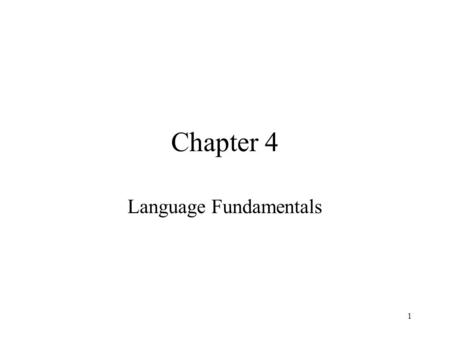 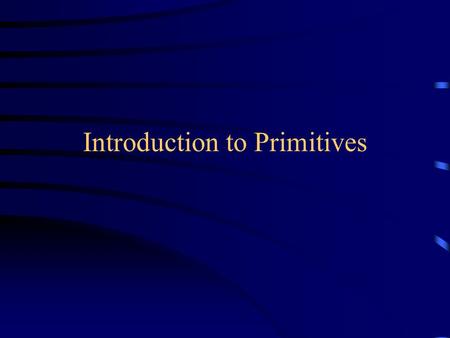 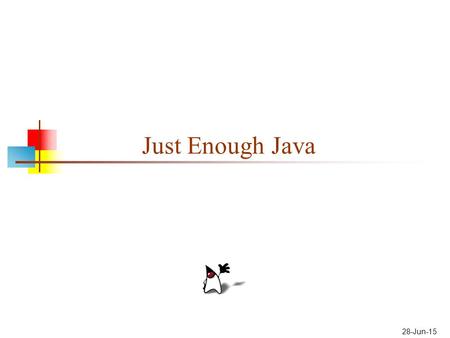 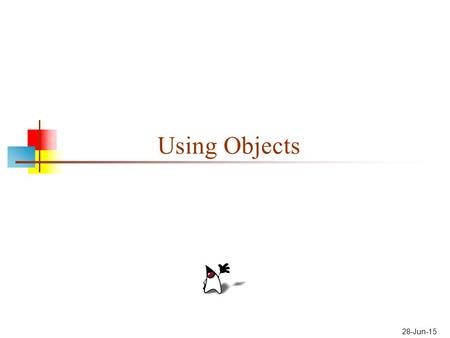 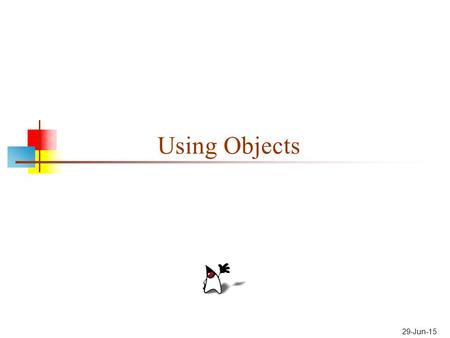 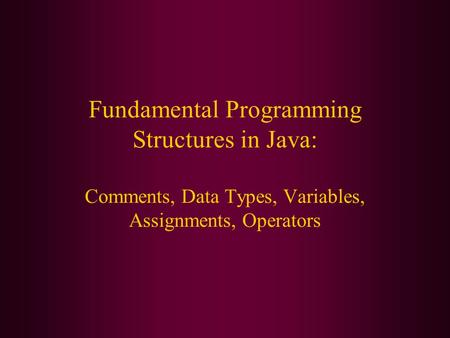 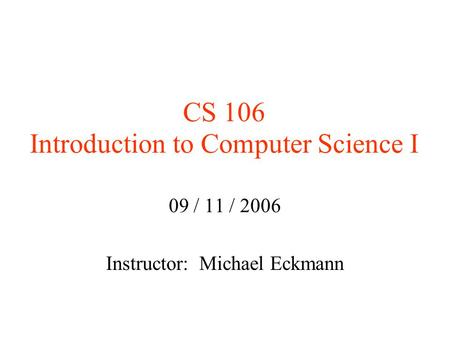 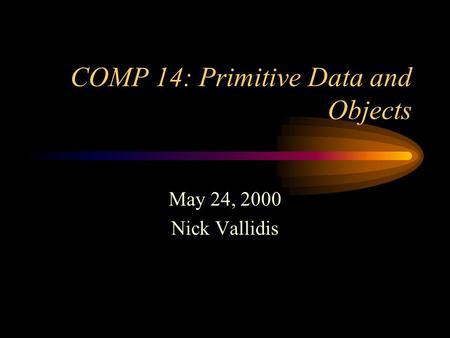 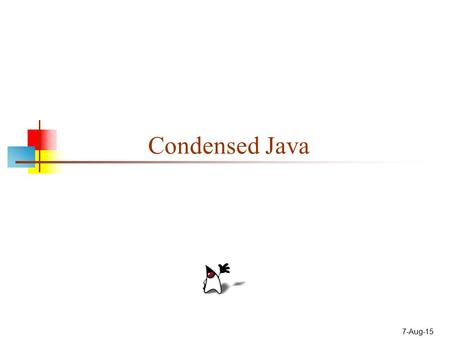 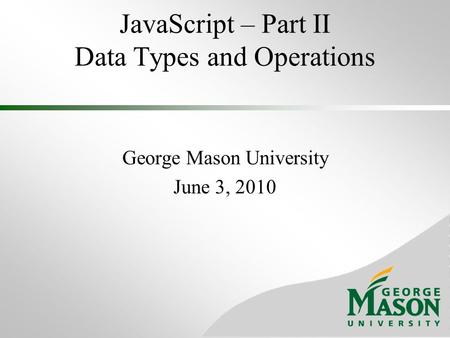 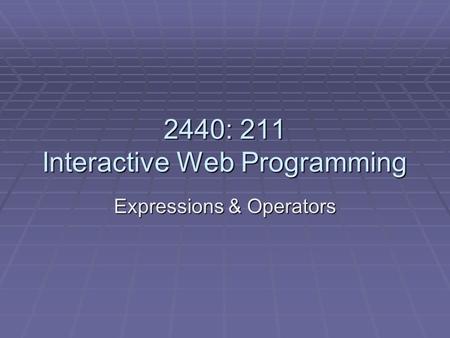