3 3 Internet Networking Mobile Ad-Hoc Networks (Cont.) Mobile Ad-Hoc Networks (Cont.)  Mobile nodes are using multi-hop wireless links  They form topology changing network without the aid of any central management.  All the nodes are free to move around  Each node is a router  The network is characterized by multi-hop connectivity.  A broadcast of routing messages may block other participants.  Such networks have been studied in the past in relation to defense research.  Recently there has been a renewed interest in this field due to common availability of low-cost laptops and palmtops with radio interfaces.  The challenge:  development of dynamic routing protocols that can efficiently find routes between two communicating nodes  the routing protocols must keep up with the high degree of node mobility that often changes the network topology drastically and unpredictably.

4 4 Internet Networking Demand-driven Routing Protocols  Creation of routes only when desired by the source node  Done by Route Discovery Process  Route Discovery Process is completed when:  a route is found  all possible routes have been examined  Maintenance of a Route  Until the destination becomes inaccessible along every path from the source  Until the route is no longer desired

5 5 Internet Networking Ad hoc On Demand Vector Routing (AODV) RFC 3561  On demand – Only nodes on an active paths maintain routing information and exchange routing tables.  A node needs to discover and maintain a route to another node only if :  the two nodes need to communicate  it’s an intermediate forwarding station that maintains connectivity between two other nodes.  AODV makes use of sequence numbers created by the destination in order to maintain the most recent information between nodes.  It is also used in order to prevent routing loops.  All routing packets carry these sequence numbers.  AODV maintain timer-based states in each node regarding utilization of individual routing table entries  a routing table entry is “expired” if not used recently.

6 6 Internet Networking The protocol - “Route Request” (RREQ)  A source that needs a path to some destination broadcasts “Route Request” (RREQ) message enclosed by a monotonically increasing “broadcast ID”, a new “sequence number” of the sender and a last known “sequence number” of the destination.  The RREQ is broadcast until it reaches a node that has a route to the destination with a destination sequence number higher than that enclosed in the request (and still “fresh enough” information).  A RREQ propagating through the network establishes the next-hop information for the reverse route back to the source.

8 8 Internet Networking Maintenance Maintenance  Failure of a link can be detected via hello messages or link layer detection.  When link goes down, the upstream nodes are notified of the failure  the destination is marked as unreachable in the routing tables of these nodes.  Timers:  Route request expiration timer  Route caching timeout  Active timeout period

10 10 Internet Networking Route Discovery Example (Cont.)  The RREQ is broadcast to nodes B and C  Node C receives RREQ  Makes reverse route entry for S dest = S, nexthop = A, hopcnt = 2  It has a route to D whereas the seq# of this route is >= seq# in the RREQ, and it’s life-time counter > 0  Thus – it’s internal table holds a newer information S B DC A RREQ

12 12 Internet Networking Route Discovery with Multiple Routes Loop preventing  Node C receives replies from D and from B.  The reply from D was received before and was sent to A.  The reply from B will be ignored (it has the same sequence number). S B DC A RREP- Seq# = x E F G 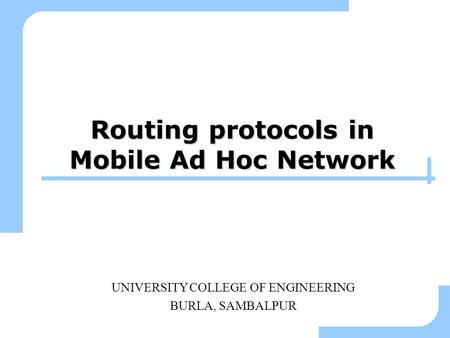 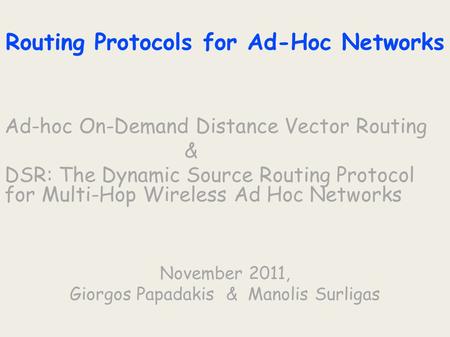 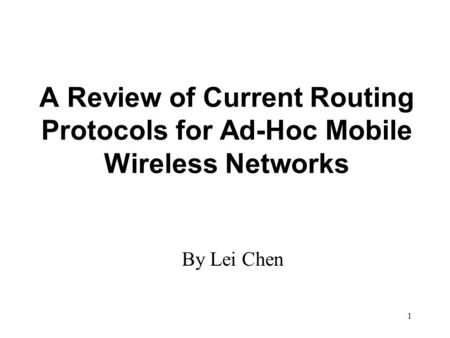 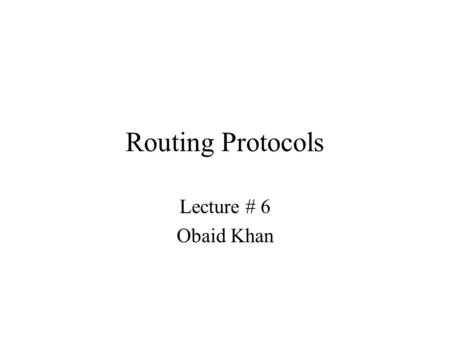 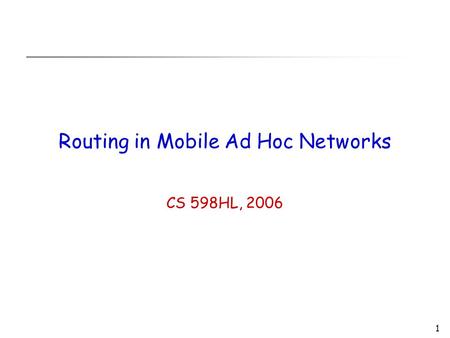 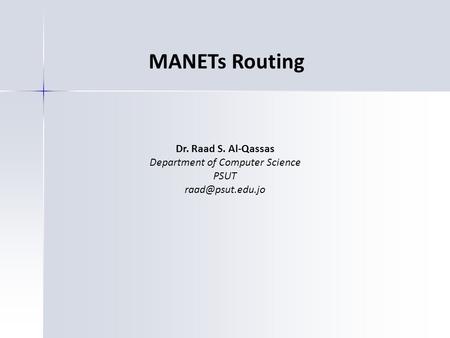 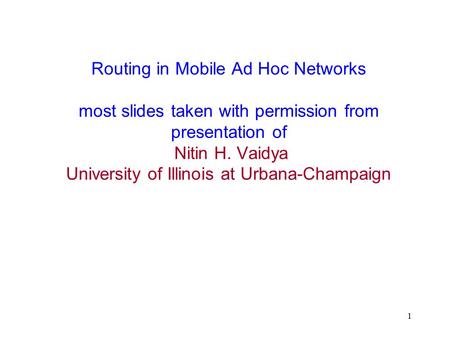 1 Routing in Mobile Ad Hoc Networks most slides taken with permission from presentation of Nitin H. Vaidya University of Illinois at Urbana-Champaign. 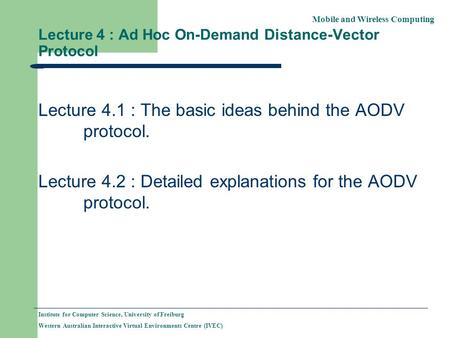 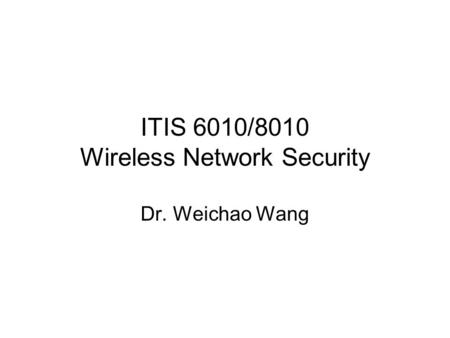 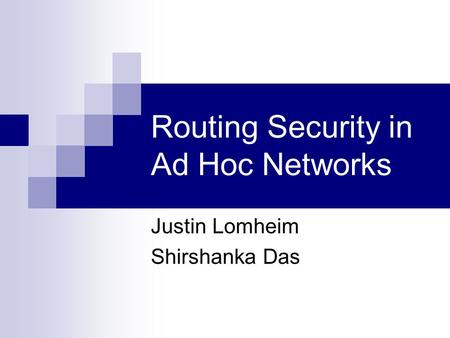 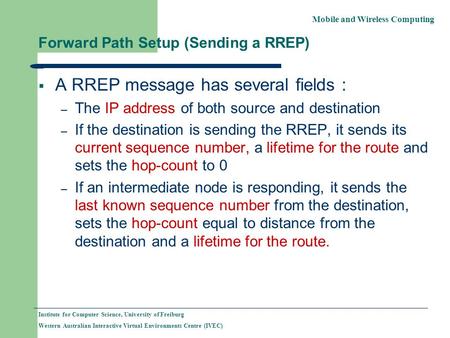 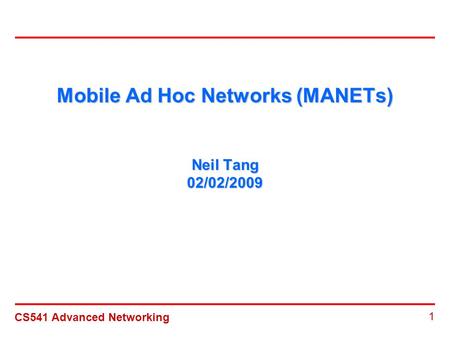 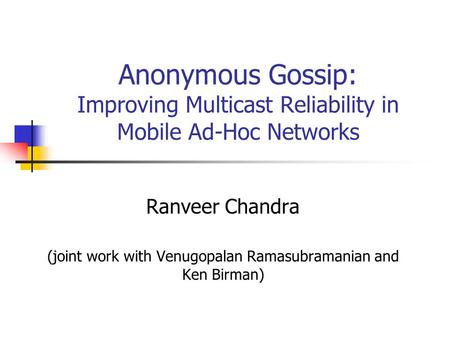 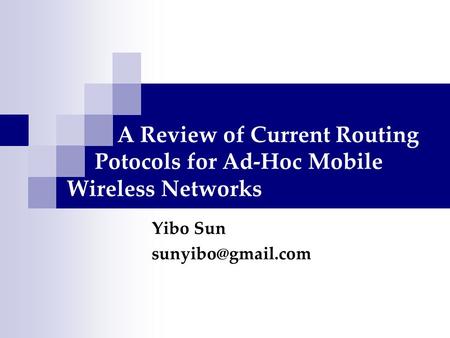 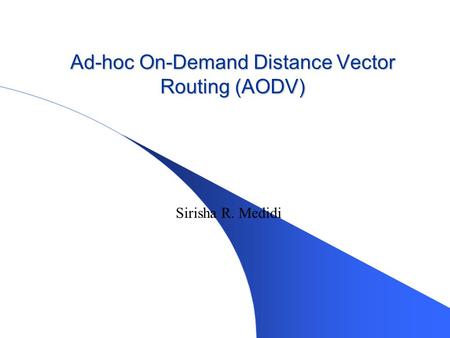 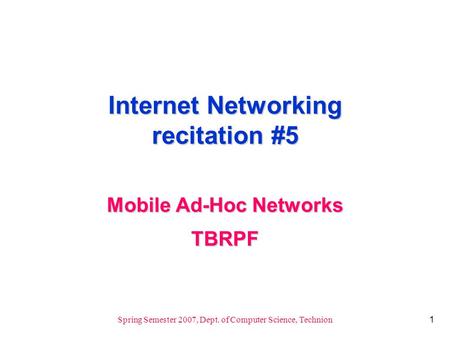 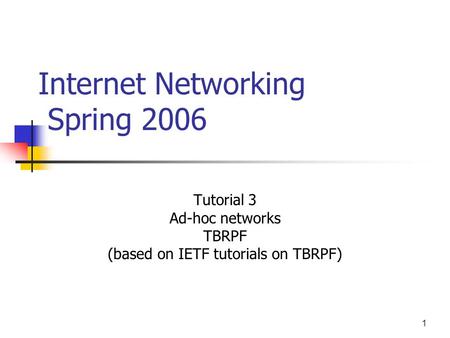 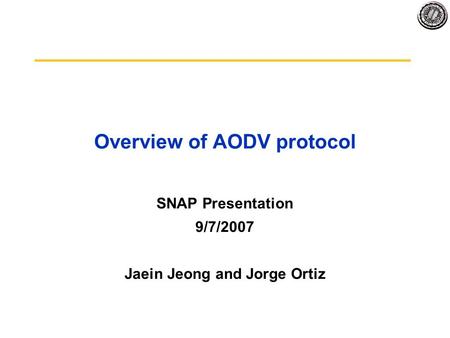 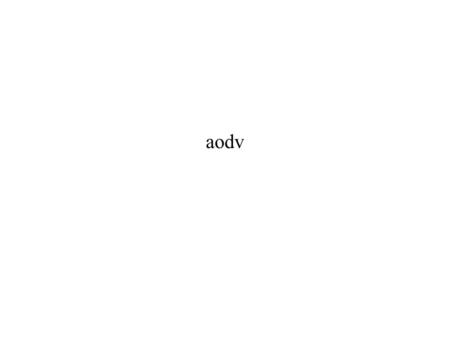 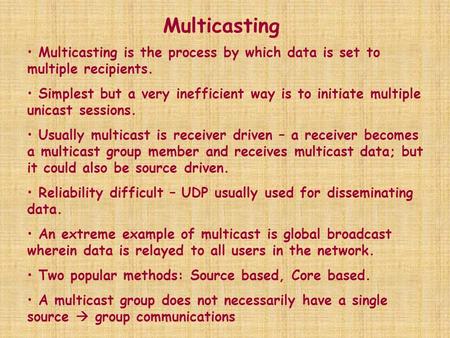 Multicasting Multicasting is the process by which data is set to multiple recipients. Simplest but a very inefficient way is to initiate multiple unicast.