2 Sociology, Tenth Edition Basic Concepts Family –A social institution found in all societies that unites people into cooperative groups to oversee the bearing and raising of children Kinship –A social bond, based on blood, marriage, or adoption Family Unit –A social group of two or more people, related by blood, marriage, or adoption, who usually live together Families of orientation –The family you are born into Families of procreation –The family you form in order to have or adopt children Families of affinity –People with or without blood ties who feel that they belong together and want to define themselves as a family

8 Sociology, Tenth Edition Structural-Functional Analysis of the Family The family serves basic functions –Socialization – creating well-integrated members of society –Regulation of sexual activity – maintenance of kinship order and property rights, incest taboos –Social placement -- births to married couples are preferred in societies –Material and emotional security – home can be a haven for people Critical evaluation –Glosses over great diversity of family life, how other institutions are taking over its roles & negative aspects like patriarchy and family violence

14 Sociology, Tenth Edition POWER, GENDER, AND MENTAL HEALTH DIFFERENT LEVELS OF DEPRESSION IN MARRIAGES CAN BE IDENTIFIED IN VARIOUS MARRIAGE TYPES Strained egalitarian –Both partners are happy to be working, but wife still does most of the housework –Husband enjoys more family income while wife has more depression Egalitarian –Spouses happy to share in all facets of marriage –Spouses experience lowest levels of depression in this form

15 Sociology, Tenth Edition DIVORCE In the U.S. Nine out of ten persons will marry. Four out of these marriages will end in divorce. Factors include: Individualism on the rise Romantic love often subsides Women are less dependent upon men Many of today’s marriages are stressful Divorce is socially acceptable Legally, a divorce is easier to get

16 Sociology, Tenth Edition Violence Family Against women –Of 791,000 reported accounts of abuse between intimate partners, 85% are against women –32 percent of all women murdered are the victims of their partners, or ex-partners –All states have marital rape laws, half have “stalking laws” on the books Against children –3 million children a year are abused, 1 million of these involve serious harm including 1,100 deaths –Abusers are as likely to be women as men with no simple stereotype

17 Sociology, Tenth Edition Alternative Family Forms Single parent families –28 percent of U.S. Families with children under 18 have only one parent in the household –78 percent of these families are headed by women Cohabitation –10 percent of all couples, or 5.5 million, only 50% decide to marry Gay and lesbian couples –Although some European countries accept same-sex marriage the U.S. Congress has banned it Singlehood –In 1960 28% of U.S. Women aged 20-24 were single, by 2000 the number had risen to 75%

18 Sociology, Tenth Edition FAMILIES AND PREDICTIONS Divorce rates remain high –More equality between sexes Family life will be variable –All kinds of units will be called families Men will continue to play a limited role in child rearing –Many dads will remain absent from household scenes Economic changes will impact families and reform marriage –Less quality time as work demands more from parents New reproductive technologies –Ethical concerns about what can and what should be done 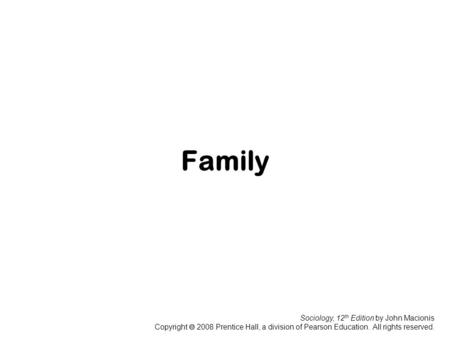 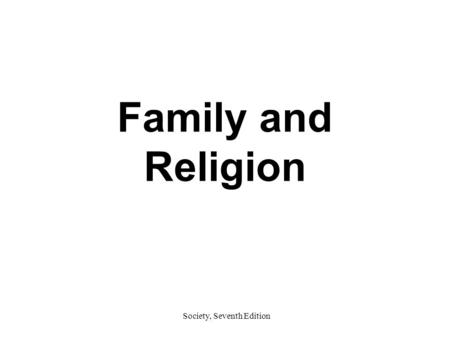