Presentation on theme: "Chapter 9 Vertical Motion. (1) Divergence in two and three dimensions. The del “or gradient” operator is a mathematical operation performed on something."— Presentation transcript:

2 (1) Divergence in two and three dimensions. The del “or gradient” operator is a mathematical operation performed on something which yields the gradient vector of that something in the cartesian dimensions. The del operator in three dimensions is: The del “or gradient” operation on the scalar temperature yields the vector of the “change of temperature” with respect to the x-, y-, and z- directions.

4 (2) Divergence theorem Graphically, divergence (and convergence) can be determined by drawing a box (or other shape) in the wind field and determining whether there is more air moving into the box or more moving out.

6 If we use something like a rectangle, the length of the sides becomes important because the sides are not all the same length. Then divergence (or convergence) must be determined by how much air flow occurs across each side of the rectangle.

7 Divergence Theorem Equation is: Note: Error, pg. 5, dxdy. This states that the divergence integrated over an area is equal to the line integral of the outward component of wind along the perimeter of the area. Where n is a unit vector point outward from the area (box) and dl represents a one-dimensional integral oriented along the edge of the box. We are integrating all the way around the area with dl (or with dxdy - first with dx, then with dy) and getting a measure of the flow of air outward from the area with The dot product of the wind vector, v, and a unit vector, n, pointing out of the box, gives us the component of the wind directed outward from the box (or divergence from the box).

9 (3) Estimating Divergence on a map. To make the determination easier, we can draw the shape such that two sides are parallel to the wind flow (so no air is flowing into or out of the area on these sides) and the other two sides are perpendicular to the air flow. The magnitude of the divergence (or convergence) across the sides perpendicular to the wind flow will be the mean wind across the side times the length of the side.

12 In three dimensions, you would work with the surface of a volume, rather than an area. If net flow in: you have convergence. If net flow out: you have divergence.

14 (4) Three-dimensional divergence The Law of Mass Conservation states that if you have net divergence of mass from a volume, the density must decrease. Continuity eqn: However, if density decreases, the Ideal Gas Law says that pressure in the volume must decrease (if temp. is constant). If pressure decreases, the pressure gradient force will be directed inward, toward low pressure, and air will start moving back into the volume.

15 Unless the parcel is ascending or descending, the three-dimensional divergence tends to be small because changes in density are small. For most purposes, the atmosphere can be regarded as essentially incompressible (in the horizontal) because the density doesn’t change (much) in response to horizontal motions. Whatever air comes in one part of a volume must go out another part.

16 So, for a volume in the atmosphere, if horizontal divergence is occurring, the volume must shrink in the vertical.

21 (5) Vertical Motion and Convergence The Continuity Equation: Horizontal Divergence: Then, And, stretching of the air column ( is positive) occurs where there is horizontal convergence (negative divergence).

22 Vertical shrinking of an air column occurs when there is horizontal divergence.

25 The anvil spreading from a cumulonimbus cloud shows divergence near the tropopause caused by strong updrafts within the cloud, implying convergence at low levels. Link: Satellite loop of tornadic supercells

26 (6) Computing Vertical Motion from Divergence If we integrate this equation from low-level (high pressure), P 0 (where ω=ω 0 ), to P 1 (where ω=ω 1 ), then: The difference in vertical velocity (in pressure coordinates) between two pressure levels is equal to the average divergence between the pressure levels multiplied by the pressure interval itself. Integrating from P 0 to P 1 means: P 1 -P 0 will be a negative term.

29 (8) Advection and the Total Derivative Consider a volume of air and “A” represents some meteorological variable about that volume; such as, water vapor. The total derivative with respect to time represents all changes with time to the variable as it moves with the air flow. The coordinate system is moving with the air. This total derivative to A can be written as: However, if we want to consider a volume of air “at a particular location,” we have to consider the flow of air into and out of the volume. Then, But, the last term on the right is just the advection of “A” into or out of the volume at a particular location, so the equation can be written as:

32 (9) Thermodynamic Equation, Revisited Changes in temperature to a volume of air moving vertically with the flow of air occurs due to (1) adiabatic expansion or contraction and (2) heat being added or removed from the volume. This can be written as: Where: = dry adiabatic lapse rate. Q = heat added or removed. c p = specific heat of air.

Download ppt "Chapter 9 Vertical Motion. (1) Divergence in two and three dimensions. The del “or gradient” operator is a mathematical operation performed on something." 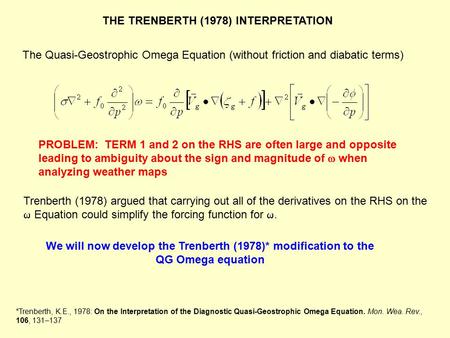 The Quasi-Geostrophic Omega Equation (without friction and diabatic terms) We will now develop the Trenberth (1978)* modification to the QG Omega equation. 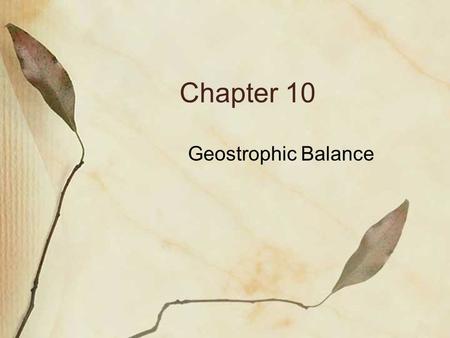 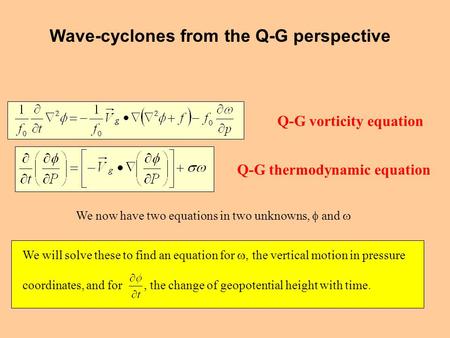 Q-G vorticity equation Q-G thermodynamic equation We now have two equations in two unknowns,  and  We will solve these to find an equation for , the. 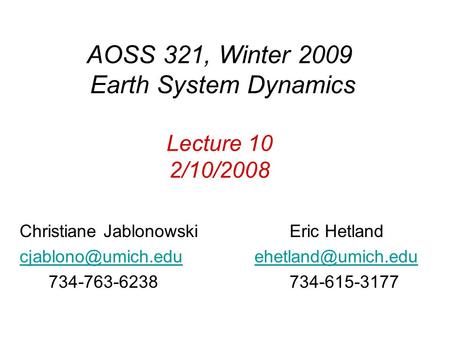 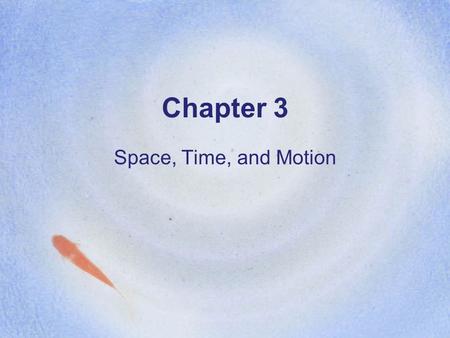 Chapter 3 Space, Time, and Motion. (1) Wind Observations Vectors have both magnitude and direction. Wind is a vector quantity. The components of wind. 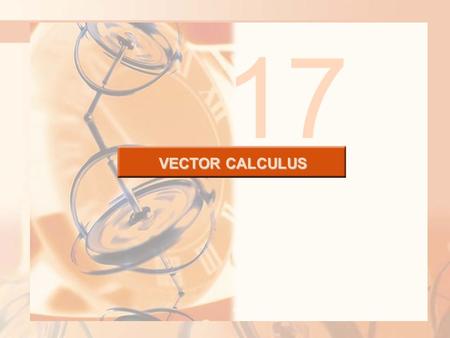 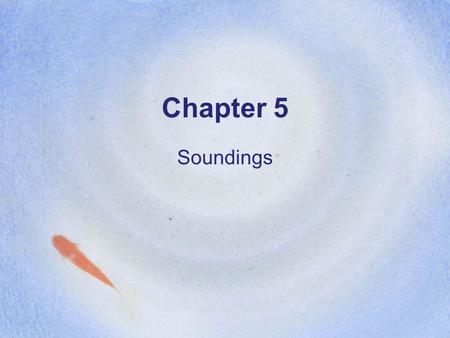 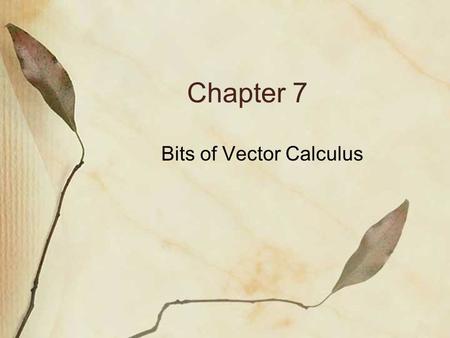 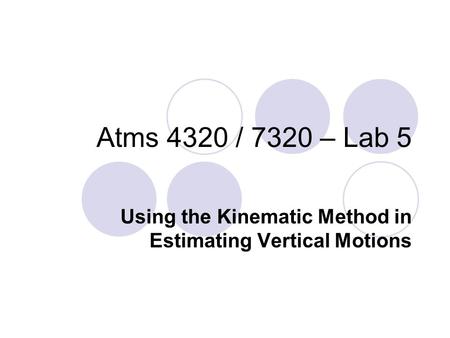 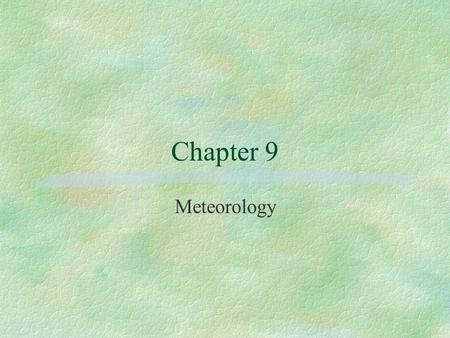