2 3.1 – Scatterplots and Correlation
When are some situations when we might want to examine a relationship between two variables? Height & Heart Attacks Weight & Blood Pressure Hours studying & test scores What else? In this chapter we will deal with relationships and quantitative variables; the next chapter will deal with more categorical variables.

5 Explanatory and Response Variables
When we deal with cause and effect, there is always a definite response variable and explanatory variable. But calling one variable response and one variable explanatory doesn't necessarily mean that one causes change in the other. 5

7 Scatterplots Let's say we wanted to examine the relationship between the percent of a state's high school seniors who took the SAT exam in 2005 and the mean SAT Math score in state that year. A scatterplot is an effective way to graphically represent our data. But first, what is the explanatory variable and what is the response variable in this situation? 7

11 Note: there is no outlier rule for bivariate data (like 1.5xIQR)
Must use definition.

16 Adding Categorical Data
The Mean SAT Math scores and percent of high school seniors who take the test, by state, with the southern states highlighted. Is the South different? 16

19 Our eyes are not good measures of how strong a linear relationship is...
A numerical measure along with a graph gives the linear association an exact value. 19

21 Facts about Correlation
Correlation makes no distinction between explanatory and response variables. r doesn't change when we change the units of measurement of x, y, or both. r is positive when the association is positive and is negative when the association is negative. The correlation r is always a number between -1 and 1. Values of r near 0 indicate a very weak linear relationship. The strength of the linear relationship increases as r moves away from 0 toward either -1 or 1. 21

24 Cautionary Notes about Correlation
Many data sets can have the same r value but have completely different linear relationships ALWAYS PLOT YOUR DATA!!! Correlation applet 24

27 Regression Lines Once we have our regression line, we can use it to predict responses. Extrapolation – using the line for predictions outside the range of values of the explanatory variable Such predictions are often not accurate

28 That’s one big rat!!! Some data were collected on the weight of a male white laboratory rat following its birth. A scatterplot of the weight (in grams) and time since birth (in weeks) shows a fairly strong positive linear relationship. The linear regression equation models the data fairly well. weight = (time) a) Interpret the slope in the (context of this setting) Interpret the y-intercept (in this setting) Would you be willing to use this line to predict the rat’s weight at age 2 years? (there are 454 grams in a pound)

29 That’s one big rat!!! slope: For every one week increase in age, the rat will increase its weight by an average of grams y-intercept: An estimate for the birth weight ( grams) of this male rat No, this would be extrapolation. The rat would weigh approximately 4,260 gram or 9.4 lbs. This is what a medium-sized cat weighs!

30 The Least-Squares Regression Line (LSRL)
In most cases, no line will pass exactly through all of the points in a scatterplot Our eyes are not a good judge of the best line Because we use the line to predict y from x, the prediction errors are errors in y, the vertical direction A good regression line makes the vertical distances of the points from the line as small as possible

32 Does fidgeting keep you slim?
Refer to today’s handout for scatterplot

33 Use your calculator and program CORR to find the equation of the LSRL for the NEA and Fat gain data.

38 How well does the line fit the data?
Two ways: Residual plot Coefficient of determination, r2 Residual – difference between observed value of response and the predicted How much error there is in the LSRL

41 Residuals Need to be small…but what’s small enough?
Standard deviation of the residuals Used to measure the typical prediction error Consistently off by 1.83

44 Residual Plots Scattered…no real pattern. A line is a good model.
Curved patter. A line may not be the best model.

45 Residual Plots Fanning…more spread for larger values of x. Prediction will be less accurate when x is large. HW: pg #39, 40

46 Using r2 to determine how well the data fits the line
r2: coefficient of determination proportion of variation in y How well LSRL does at predicting values of response How much better is the LSRL at predicting responses than if we just used as our prediction.

48 This gives us the proportion of how much error there is in the LSRL model with respect to the error in the mean model. How can we use this to determine how much better the LSRL is (r2)? r2 = 1 – = .6066

49 So what does this mean? 60.6% of the variation in fat gain is explained by the LSRL relating fat gain and non-exercise activity. The other 39.4% is individual variation that is not explained by this linear relationship

51 Facts about LSRL Distinction between explanatory and response is essential. (Will get a different line if they are reversed) Close connection between correlation and slope LSRL always passes through r describes the strength of the straight-line relationship r2 is the proportion of variation in y that is explained by the least-squared regression of y on x 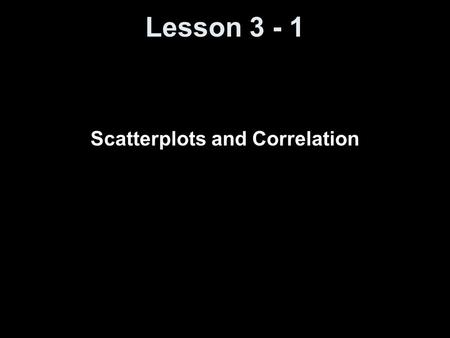 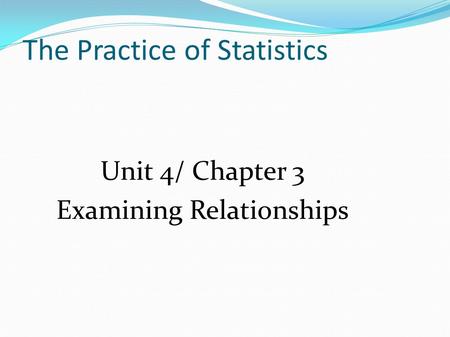