1 Notice and Note Signposts
Essential Question: What do good readers do?

2 STOP and Notice and Note
When you’re reading and a character says or does something that’s opposite (contradicts) what he has been saying or doing all along. You should stop and ask yourself: “Why is the character doing that?” The answers could help you make a prediction or make an inference about the plot and conflict.

3 1. Contrasts and Contradictions
What is the Signpost? Clues to the Signpost What it helps us understand A sharp contrast between what we expect and what we observe the character doing. -A character behaves in a way we don’t expect. -An element of the setting changes in a way we don’t expect. -Character development -Internal conflict (the character’s stuggles) -Theme -Relationship between setting and plot Example: Chrysanthemum loves her name, then hates her name. Explanation: She comes home after school “wilted” and sad. Then her parents boost her spirits up again. -Develops character, she’s still young and can be easily peer pressured or bullied. Unsure of herself -Possible theme (never give up who you are; don’t let anyone tell you who you can or cannot be)

6 Aha Moment What is the Signpost? Clues to the Signpost
What it helps us understand A character’s realization about something that shifts his actions or his understandings of himself, others, or the world around him Phrases like: “Suddenly I understood…” “In an instant I knew” “The realization hit me that…” -Character development -Internal conflict (the character’s stuggles) -Plot Example: Explanation:

9 Tough Questions When you’re reading and the character asks himself a really difficult question. You should stop and ask yourself: “What does this question make me wonder about?” The answers will tell you about the conflict and might give you ideas about what will happen later in the story.

10 Tough Questions What is the Signpost? Clues to the Signpost
What it helps us understand Questions a character raises that reveal his or her inner struggles Phrases expressing doubt or confusion: “What could I possibly do…” “I had never been so confused about…” “How could she ever understand…” -Character development -Internal conflict (the character’s stuggles) -Theme Example:

11 What you should ask yourself when you see a Tough Question
How would I react in the character’s situation? What alternatives does the character seem to have in answering the question? What values will help the character make his or her choice (concern for other people, desire for wealth, determination to appear courageous, something else)? What would happen if the character made this choice, instead of that one?

12 Words of the Wiser When you’re reading and a character (who’s probably older and lots wiser) takes the main character aside and gives serious advice, you should stop and ask yourself: “What’s the life lesson, and how might it affect the character?” Answering this question probably tells you the theme for the story.

13 Words of the Wiser What is the Signpost? Clues to the Signpost
What it helps us understand The advice or insight of a wiser character (usually older). Main character and wise character are usually having conversation by themselves. Quiet moment. Advice about a problem or decision. -Theme -Internal conflict -Relationship between character and plot Example:

14 Again & Again When you’re reading and you notice a word, phrase, object, or situation mentioned over and over, you should stop and ask yourself: “Why does this keep showing up again and again?” This may tell you about the conflict, theme, and may foreshadow what might happen later.

15 Again and Again What is the Signpost? Clues to the Signpost
What it helps us understand Events, images, or particular words that repeat over a portion of the story. Repeated. Sometimes used in an odd way to make a point. -Plot -Setting -Symbolism -Theme -Character Development -Conflict Example:

16 Memory Moment When you’re reading and the author interrupts the action to tell you a memory, you should stop and ask yourself: “Why might this memory be important?” The answers can tell you about the theme, conflict, or foreshadow what might happen later in the story.

18 What should we do when we get to a Signpost? ASK…
Why is the character doing that? How might this change things? What does this question make me wonder? What’s the life lesson and how might it affect the character? Why does this keep happening? Why is this important? 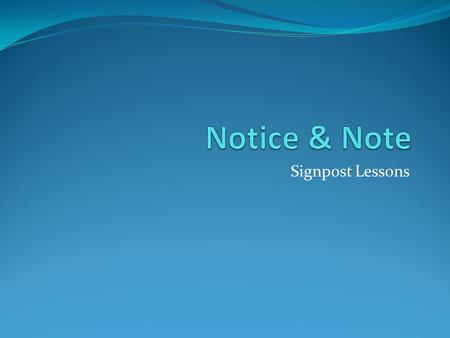 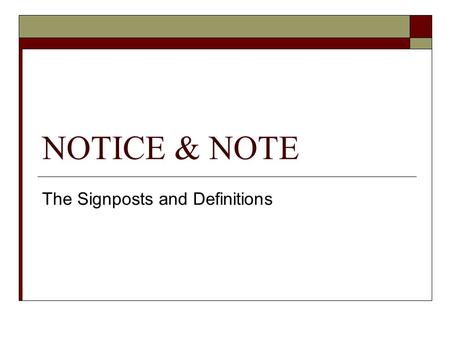 The Signposts and Definitions 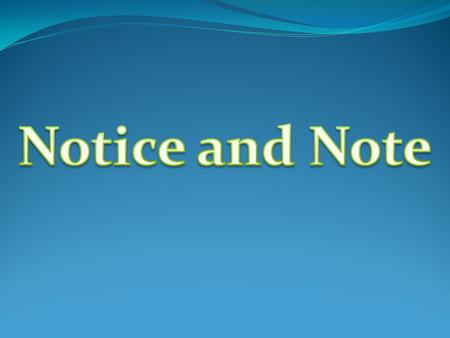  A sharp contrast between what we would expect and what we observe the character doing  Behavior that contradicts previous behavior or well- established. 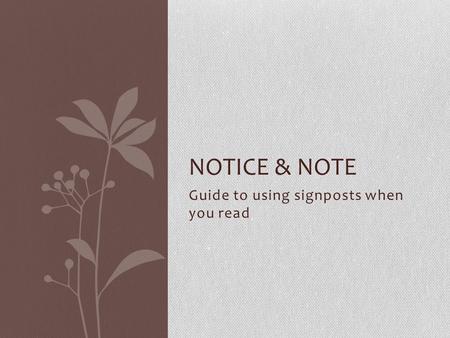 Guide to using signposts when you read 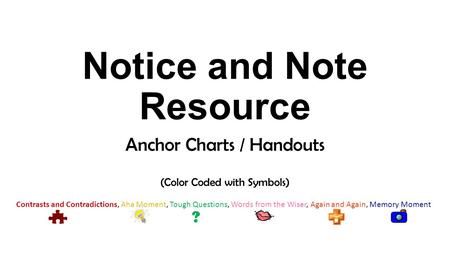 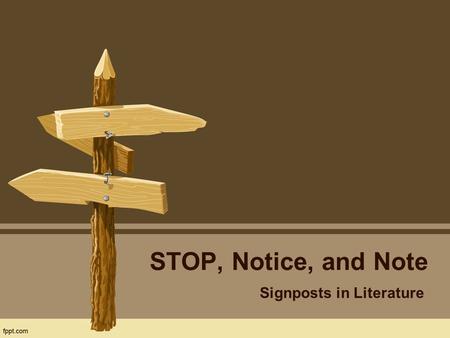 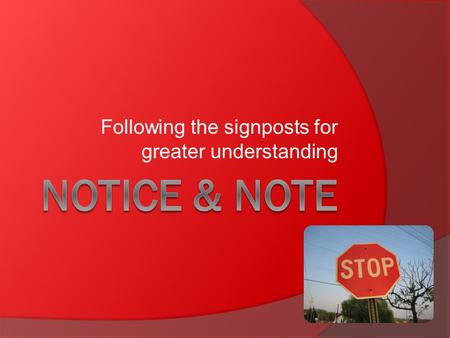 Following the signposts for greater understanding

Stop, Notice and Note Signposts - Reading on the Road 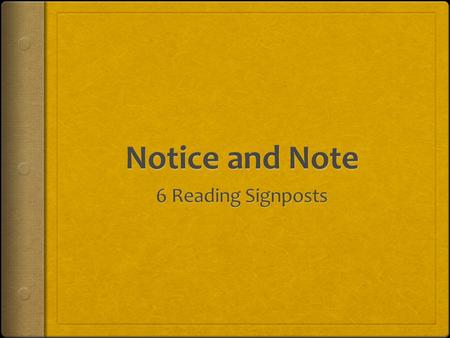 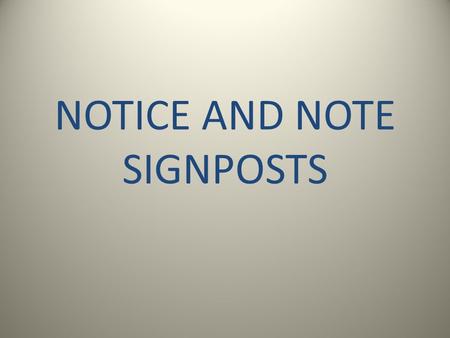 NOTICE AND NOTE SIGNPOSTS. What is Close Reading? Close reading is stopping independently at points in our reading to re-read, ask questions, make observations. 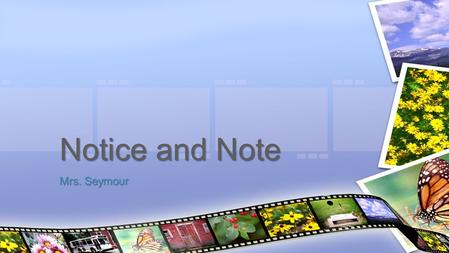 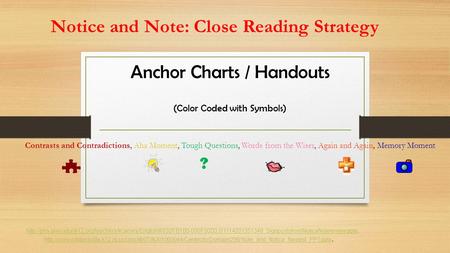 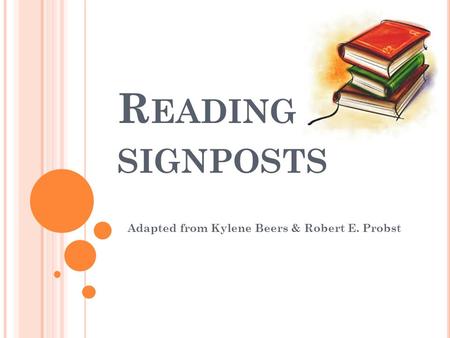 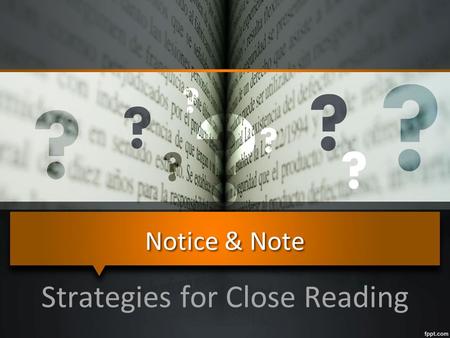 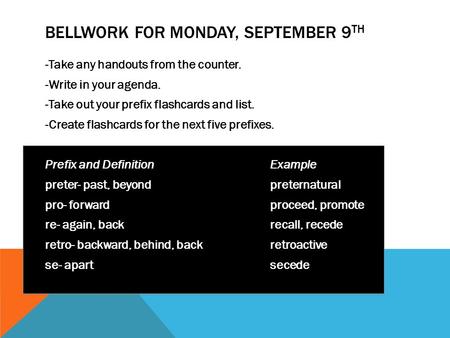 BELLWORK FOR MONDAY, SEPTEMBER 9 TH -Take any handouts from the counter. -Write in your agenda. -Take out your prefix flashcards and list. -Create flashcards. 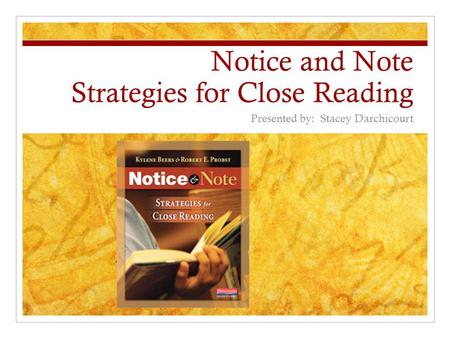 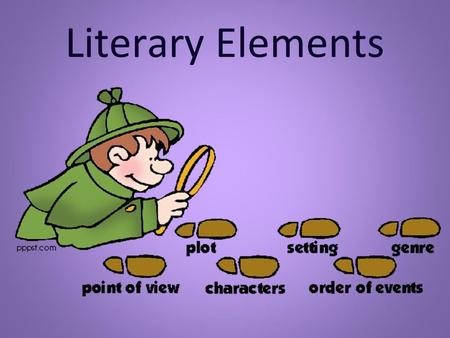