Presentation on theme: "Objectives Analyze the causes of the “new imperialism.”"— Presentation transcript:

1 Objectives Analyze the causes of the “new imperialism.”
Explain why Western imperialism spread so rapidly. Describe how imperial governments ruled their empires.

2 Terms and People imperialism – the domination by one country of the political, economic, or cultural life of another country or region protectorate – a region in which a local ruler was left in place but expected to follow the advice of European advisors on issues such as trade or missionary activity sphere of influence – an area in which an outside power claimed exclusive investment or trading privileges

3 How did Western nations come to dominate
much of the world in the late 1800s? Great Britain and other Western countries built overseas empires in the late 1800s. Advances in science and technology, industry, transportation, and communication gave these industrialized nations many advantages. Armed with new economic and political power, Western nations set out to dominate the world.

4 In the late 1800s, Western imperialism expanded aggressively.
Imperialism is the domination by one country of the political, economic, or cultural life of another country or region. Although Europeans had established colonies earlier, they had previously had little direct influence over people in China, Africa, or India.

5 The strong, centrally governed nation-states of Europe were greatly enriched by the Industrial Revolution. Encouraged by their new strength, these nations embarked on a path of expansion—the new imperialism.

7 Missionaries, doctors, and colonial officials saw it as their duty to spread the blessings of Western civilization. These included medicine, law, and religion. Imperialism was also driven by genuine humanitarian and religious goals.

9 National pride and aggressive foreign policy came to be known as jingoism.
A driving force behind imperialism was the desire for new markets. This British propaganda poster boasts that Africa would become a gold mine for British-made products.

10 Between 1870 and 1914, imperialist nations gained control over much of the world.
Leading the way were explorers, missionaries, soldiers, merchants, and settlers. Imperialists found support among all classes of society, including bankers, manufacturers, and workers.

11 Western expansion succeeded for a number of reasons.
Disadvantages of the non-Western nations The Ottoman and Chinese civilizations were in decline. The slave trade had damaged African nations. Advantages of the Western nations They had strong economies and well-organized governments. They had superior technology in weapons, communication, medicine, and transportation.

12 Some tried to strengthen their societies by reforming their Hindu, Muslim, or Confucian traditions.
Educated Africans and Asians tried to form nationalist movements to expel the imperialists. Asians and Africans resisted, but were over- powered by weapons such as the Maxim machine gun.

13 In the West, a small group opposed imperialist actions.
Some saw imperialism as a tool of the rich. Some felt it was immoral. Others saw it as undemocratic. Westerners were moving toward greater democracy at home, they noted, but were imposing undemocratic rule on others.

15 Colonial powers used additional methods to rule.
They often used protectorates. Local leaders were kept in office. Colonial advisors told them what to do. This method was less costly. Spheres of influence were carved out. Colonial powers claimed exclusive right to trade or invest in a particular area. The goal was to prevent conflict with other colonial powers.

Download ppt "Objectives Analyze the causes of the “new imperialism.”" 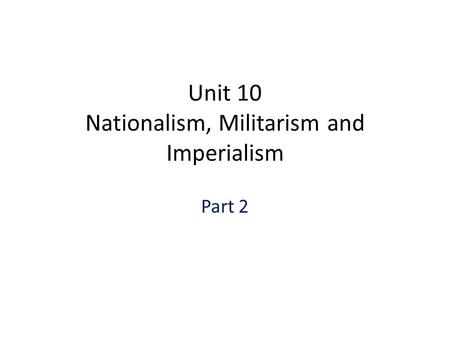 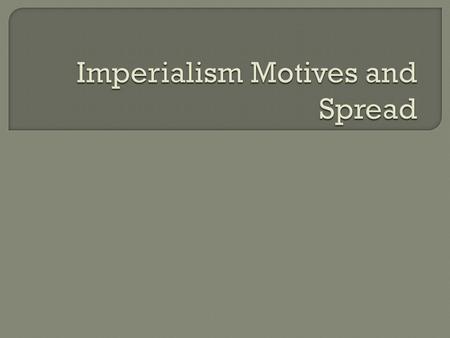