THE NEPAL EARTHQUAKE OF APRIL 25,2015 Part 9: It Could Have Been Worse Walter Hays, Global Alliance for Disaster Reduction, Vienna, Virginia, USA Walter.

6 GRIM STATISTICS OF THE DISASTER ON MAY 2 ND OVER 8,000 DEAD AND 14,000 INJURED WITH THOUSANDS PRESUMED DEAD AND BURIED IN THE DEBRIS IN CITIES AND REMOTE VILLAGES THAT WERE TOTALLY DEVASTATED; - - -

7 GRIM STATISTICS OF THE DISASTER (continued) HOMELESS + DEVASTATED INFRASTRUCTURE IN A POOR COUNTRY IS A RECIPE FOR AT LEAST A $2 BILLION DISASTER AWAITING INTERNATIONAL ASSISTANCE FOR RECOVERY AND RECONSTRUCTION; - - -

8 AS GRIM AS THE REALITY APPEARS, IT COULD HAVE BEEN WORSE

9 IT COULD HAVE BEEN WORSE The epicenter could have been closer to Kathmandu: i.e., much closer than 80 km, including the “bulls eye” location, as in the 1976 Tangshan, China earthquake..

12 IT COULD HAVE BEEN WORSE The earthquake could have occurred at the “worst” time of day; i.e., 11:56 PM when everyone is in bed in their vulnerable homes instead of 11:56 AM when people are outside their homes.

13 IT COULD HAVE BEEN WORSE The aftershock sequence, which will probably last a year, could have been more vigorous with the earliest aftershocks having mag- nitudes near M7, exacerbating damaged and/or partially collapsed buildings, and infrastructure.

14 IT COULD HAVE BEEN WORSE The ground shaking could have triggered many more landslides, and mudslides (when combined with prolonged rainfall), and avalanches.

15 IT COULD HAVE BEEN WORSE Some of the landslides could have dammed rivers, creating “earthquake lakes”, as in the 2008 Sichuan, China earthquake--- increasing the risk from flooding.

16 IT COULD HAVE BEEN WORSE The “disaster after the disaster”— infectious diseases and loss of function of medical facilities— could have been worse than the earthquake disaster.

20 TEMPORARY HOUSING: ONE OF THE TENT CAMPS (Credit: AP)

21 TUESDAY (continued) THE GOVERNMENT HAD ESTABLISHED 16 LARGE TENT CAMPS IN KATHMANDU; MANY RSIDENTS CONTINUED SLEEPING IN THE STREETS OR IN OPEN SPACES AWAY FROM DAMAGED BUILDINGS, HOMES, AND WALLS;

23 BAD NEWS FOR THE FUTURE: Earthquake experts said Saturday's earthquake did not release all of the pent-up seismic pressure in the region near Kathmandu. According to GPS monitoring and geologic studies, “some 33 to 50 feet (10 to 15 meters) of motion may still need to be released,” said Eric Kirby, a geologist at Oregon State University. 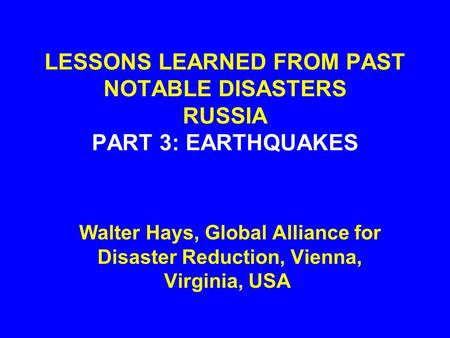 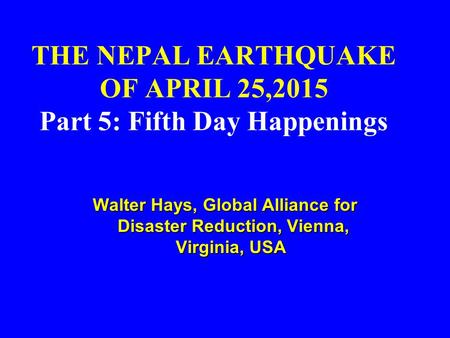 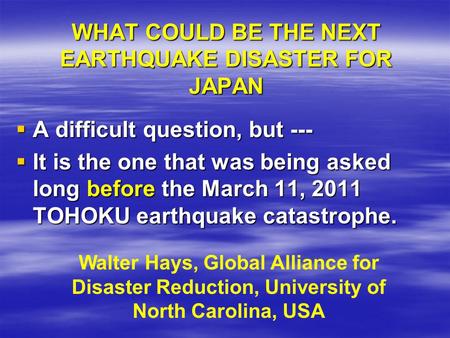 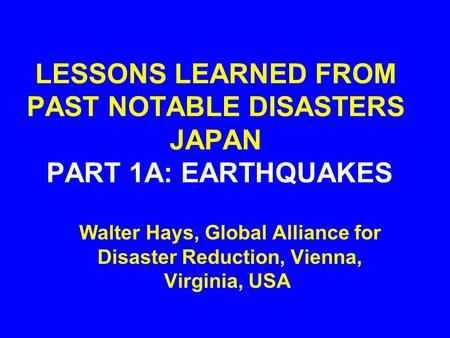 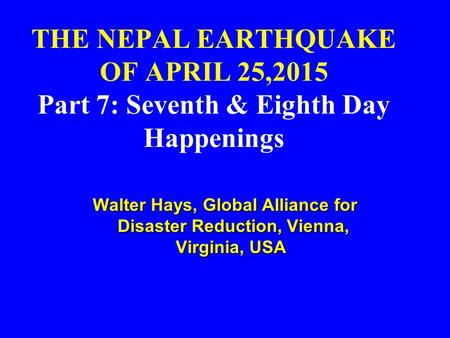 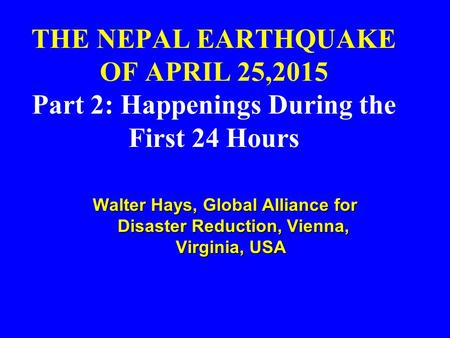 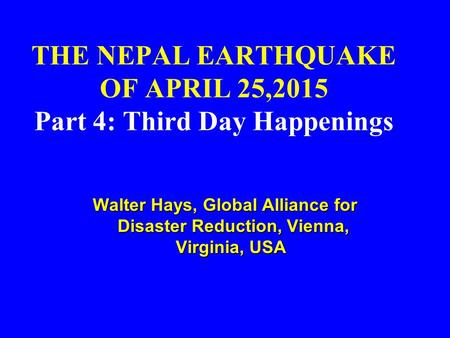 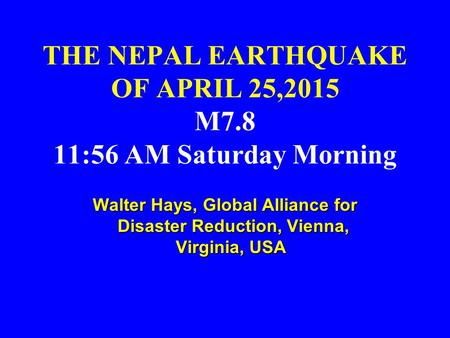 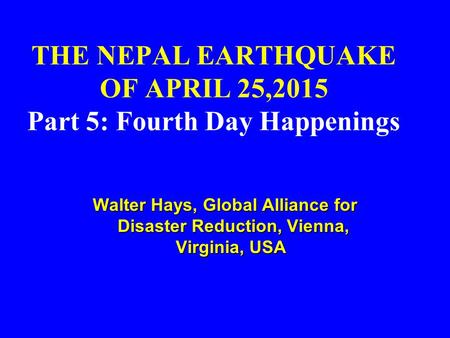 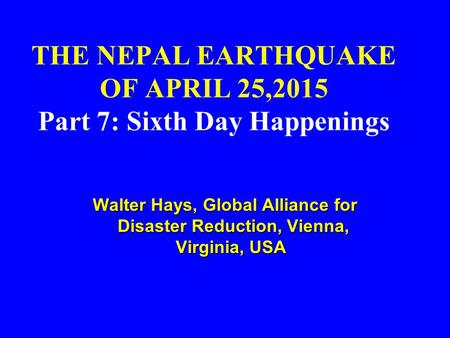 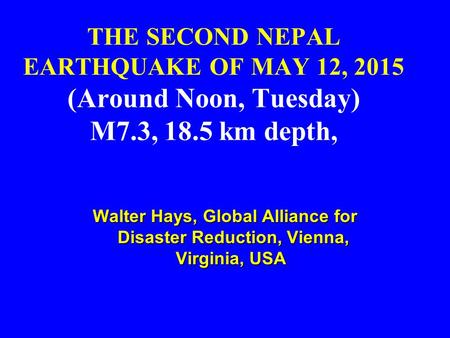 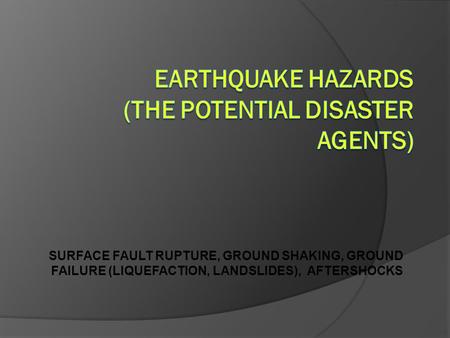 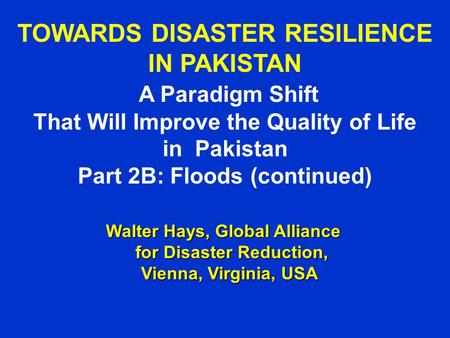 TOWARDS DISASTER RESILIENCE IN PAKISTAN A Paradigm Shift That Will Improve the Quality of Life in Pakistan Part 2B: Floods (continued) Walter Hays, Global. 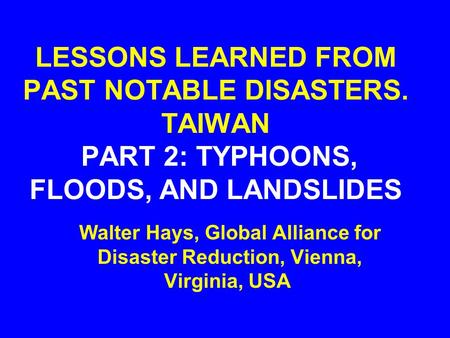 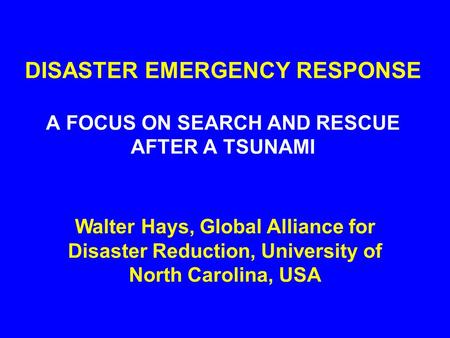 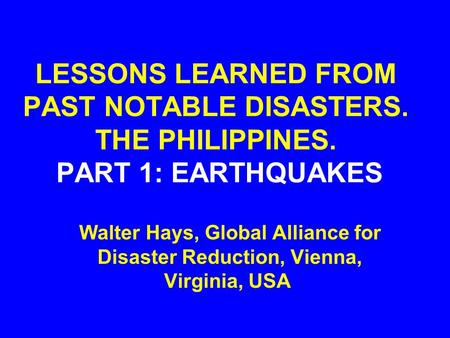 LESSONS LEARNED FROM PAST NOTABLE DISASTERS. THE PHILIPPINES 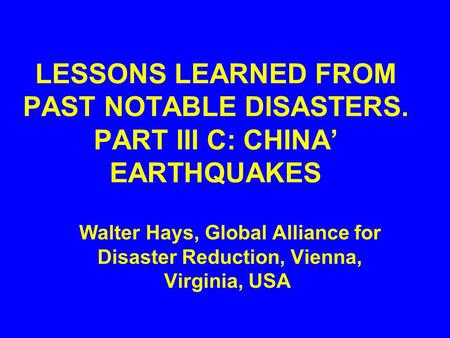 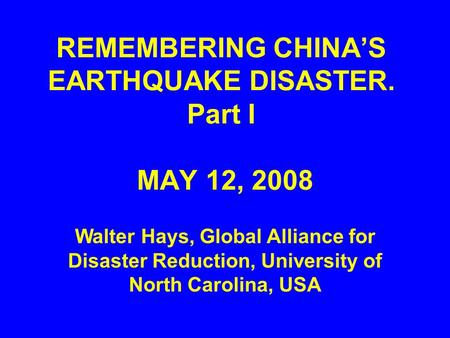 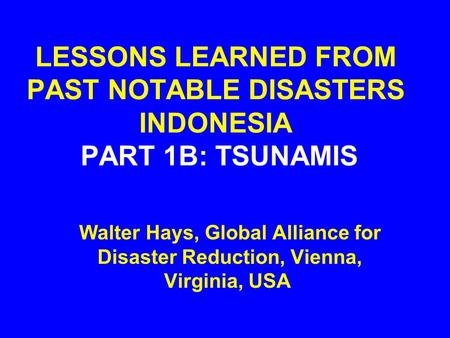 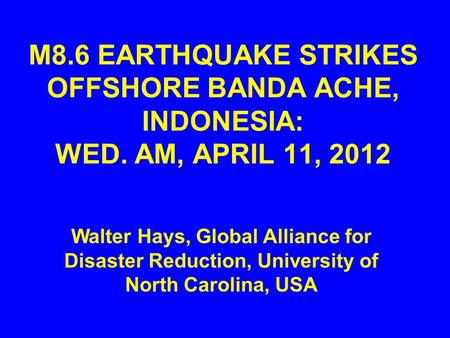