3 Barriers to International Trade
ESSENTIAL QUESTIONS: What are the effects of trade barriers such as tariffs, quotas, embargoes, etc.? How is foreign exchange used in trade? How do trade deficits correct themselves under flexible exchange rates?

5 Barriers to International Trade
Although international trade can bring many benefits, some people object to it because it can displace selected industries and groups of workers in the United States. The European ban on American hormone-treated beef is just one example of attempts to restrict trade.

6 Restricting International Trade
Two major ways of restricting trade are through a tariff, or tax placed on imports, and a quota, a limit on the quantities of a product that can be imported. A protective tariff is one that is high enough to protect less efficient domestic industries. A revenue tariff is one high enough to generate revenue.

7 Restricting International Trade
Most quotas are used to reduce the supply of a product and keep prices high for domestic producers. Other barriers to trade include overly rigorous health inspections and difficult licensing requirements.

8 Arguments for Protection
Protectionists are people who favor trade barriers that protect domestic industries and offer various arguments to defend their position. According to one argument, a country could become so specialized that it would end up being dependent enough on other countries that it would affect national defense. The infant-industries argument is the belief that new industries should be protected from foreign competition.

9 Arguments for Protection
Protectionists are people who favor trade barriers that protect domestic industries and offer various arguments to defend their position. Some argue that tariffs and quotas protect domestic jobs form cheap foreign labor. The argument for keeping the money at home claims that limiting imports will keep American money in the United States.

10 Arguments for Protection
The balance of payments argument suggests that protection would keep down the difference between the money a country pays to and what it receives from other nations.

11 The Free Trade Movement
Protectionists are people who favor trade barriers that protect domestic industries and offer various arguments to defend their position. Trade barriers work only if other countries do not retaliate, causing all countries to suffer. Restrictive legislation in the past nearly halted international trade.

12 The Free Trade Movement
Protectionists are people who favor trade barriers that protect domestic industries and offer various arguments to defend their position. Various trade agreements have allowed countries to reduce tariffs in cooperation with other nations. The World Trade Organization (WTO) and the North American Free Trade Agreement (NAFTA) are examples of international agencies for promoting freer trade.

13 The Free Trade Movement
Protectionists are people who favor trade barriers that protect domestic industries and offer various arguments to defend their position.

16 Financing and Trade Deficits
Trade between nations is similar to exchange between individuals. The major difference is that each country has its own monetary system, which makes the exchange more complicated. The value of some currencies, like the Hong Kong dollar, is tied to the value of the U.S. dollar in the hope of simplifying international trade.

19 Foreign Exchange Exchange rates are fixed or flexible.
Obviously, fixed rates do not change. Flexible exchange rates, commonly used today, establish the value of each currency through the forces of supply and demand.

20 Trade Deficits and Surpluses
Whether a country has a trade deficit or surplus depends in part on the international value of its currency. The trade-weighted value of the dollar is an index that shows the strength of the dollar against foreign currencies. A weaker dollar buys fewer foreign goods.

21 Trade Deficits and Surpluses
When would it be most economical for Americans to travel abroad: when the dollar is weak or when it is strong? When the dollar is strong. Because a strong dollar allows American dollars to buy more of foreign goods and services because other currencies are weaker by comparison. 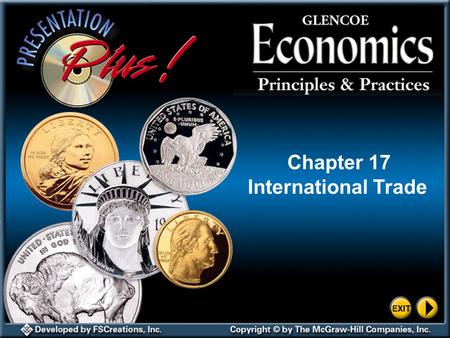 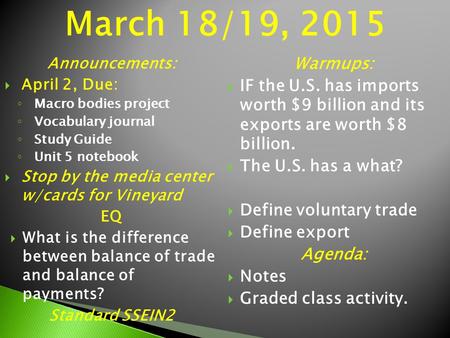 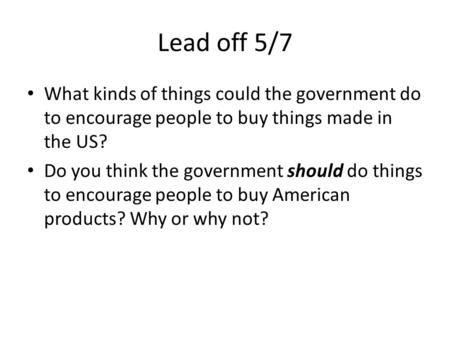 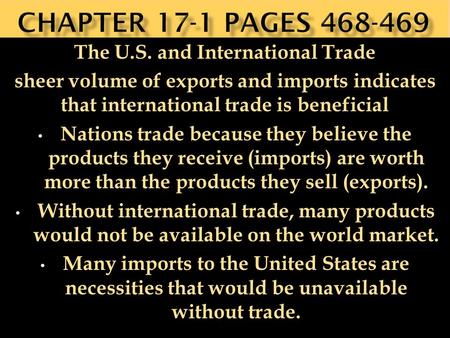 The U.S. and International Trade sheer volume of exports and imports indicates that international trade is beneficial Nations trade because they believe.