3 Malnutrition: medical condition of poor health caused by a diet that includes too much, or too little, of one or more essential nutrients. Both under nutrition (over 50 diseases) and over nutrition (obesity, high blood pressure) can contribute to a shorter life expectancy and poorer quality of life. Figure 10-1 on page 147 Figure 10-2 on page 148

4 Chronic Hunger: more than 850 million people world wide cannot grow or buy enough food and are undernourished. Seasonal hunger is when hunger occurs at a specific time of year due to agricultural or weather cycles. Figure 10-3 on page 149

5 The Geography of Hunger
The Global Hunger Index ranks countries on three key indicators of hunger and shows the severity of hunger in countries around the world. The three indicators are: Portion of people who are food-energy deficient Prevalence of underweight children under the age of 5 Under 5 mortality rate See Figure 10-4 on page 149

7 Most areas have one or more deficiencies, but farmers have been able to make adjustments.
See figure 10-6 on page 150 Irrigation Terraces

8 Types of Agriculture Subsistence farming is most common in the Periphery and some parts of the New Core. Meets the immediate food needs of their families Produce many products on small acreages Any surplus is sold or traded to meet other family needs

12 The Green Revolution Began in 1943 when the Rockefeller Foundation set up an agricultural research station in Mexico. Dr. Norman Borlaug and his colleagues wanted to develop high-yield varieties of wheat to increase food production in Mexico and the developing world. The new wheat crops… Are smaller, focus energy on growing seeds Respond better to fertilizer, pesticides, and irrigation Grow faster The success of the research project lead research to develop high-yield varieties of rice.

15 Concerns About the Green Revolution
The Green Revolution has boosted the world’s food production but there are still some concerns: Costly - many poor farmers on small plots cannot afford fertilizers, pesticides and irrigation. Loss of Genetic Diversity - if only 1 or 2 High Yield Varieties are planted and wiped out, the food supply is threatened. Not Environmentally Sustainable – yield from HYV’s has dropped significantly in a few decades and the decrease in soil fertility cannot be made up entirely by adding chemical fertilizers.

16 Self-Interest - the creation of Western-style agriculture opened huge new markets for companies from the developed world. Narrow Focus (land) - initially research was focused on areas with fertile soils and reliable rainfall. It did little to help the 71% of the continent that consists of arid and semi-arid areas. Mechanization - increased mechanization reduced the number of agricultural jobs in developing countries.

18 Food Production Issues
Dr. Borlaug was awarded the Nobel Peace Prize in 1970 for his work but stated that the Green Revolution was only a “temporary success” and that it would only provide “breathing space” until population growth came under control. Recently the world’s population has increased annually at 2.2%. Food production has increased at only 1.3%. The amount of good farm land is finite. The Green Revolution peaked in the mid ‘80’s. Since then world production of wheat has steadily declined.

19 Biotechnology and Farming
Swiss scientists spent more than 10 years and $150 million US to produce new varieties of rice that will provide sufficient amounts of vitamin A and iron. Biotechnologists move desirable genes from one organism to another; plant to plant, animal to animal, and even from plant to animal and visa-versa. This is not the same as selective or cross breeding.

20 The new species created are called genetically modified organisms (GMOs)
GMOs were created to resist certain herbicides, and to resist certain insects. In 2006 there were 102 million hectares GMO crops grown in the world by 10.3 million farmers in 22 countries.

21 What’s the Benefit of GMOs?
Herbicide Pesticide Scientists took a gene from plants that were resistant to broad-spectrum herbicides and introduced it into soybeans and other crops. The new crops could be sprayed with herbicides only as needed. This cuts down on the amount of chemicals entering the environment. Scientists took a gene from a soil bacteria, modified it, and introduced it into the plant. The new plant releases a toxin to kill specific insects and yet is harmless to other insects, people and animals who eat the plant or it’s fruit. This has reduced the amount of insecticides dramatically.

22 Concerns about biotechnology
Despite the impressive benefits to GMOs, they remain a very controversial topic and there are many concerns. Super bugs – modified crops may result in the creation of pesticide resistant insects. These insects will flourish without competition for food.

23 Super weeds – herbicide resistant plants could develop in the same way as “super bugs”.
Who Owns what? - Charitable groups funded the Green Revolution to benefit the poor, but private companies are carrying out most GMO research.

24 Terminator Technology 1 – plants genetically modified to produce sterile seeds. Seed companies make huge $ if a farmer is forced to buy new seed every year. Terminator Technology 2 - Critics fear that if it escapes into the gene pool the results could be catastrophic. Supporters feel that is impossible as the terminator gene cannot reproduce.

25 Health Problems??? – Not enough research has been done to prove the safety of transgenic food products; health problems could be an issue in the future. Labeling – 70% of the products we buy at a supermarket contain genetically engineered food, but in North America, we don’t know it. Polls show that 85% of Canadians support mandatory labeling of GMOs

27 Loss of Genetic Diversity
When farmers stop raising the old varieties in favor of the new, the seeds and animal breeding lines are lost forever. Some estimate 75% of crop diversity was lost last century. This is obviously a major concern.

28 Land Reform Land reform is the re-distribution of land from large landowners to small landowners, landless farm workers and sharecroppers. Not the norm in most developing countries as it is very popular with the poor and very unpopular with the rich landowners. Land ownership issues often result in conflict.

29 Role of Women in Agriculture
In areas where food shortages are worst, women are responsible for most of the food production, but they have very little control, if any. If women are empowered, the food supply in developing countries will increase.

30 Agricultural Support Policies
Designed by governments to protect the country’s agricultural economy by placing taxes and tariffs on imported goods or subsidizing certain domestic products. The poor Periphery countries suffer the most from subsidies in Old Core Countries. They just can’t compete. In 2004, US cotton farmers collected $4.9 billion in subsidies. They exported ¾ of their crop and controlled 40% of the world trade.

31 Monoculture Monoculture is a single crop being planted over a large area. Monoculture … depletes the soil of nutrients which increases the need for fertilizers. relies heavily on pesticides. reduces genetic diversity. contributes to habitat destruction.

32 Corporate Farming Corporate farming is the large-scale production of food on farms owned by corporations. The term economies of scale means that an increase in the size of the operation causes a decrease in the cost of production. Large-scale corporate farming is putting the smaller family farms out of business. Vertical Integration is when a company operates at all stages of an economic activity, from producing a good to retailing it.

33 Factory farms are large-scale operations that produce high outputs at the lowest cost.
Processing of animals is on an assembly line basis Animals are raised indoors and are fed and watered with quantities exactly measured to produce the greatest weight gain in the shortest time. Factory Farm

34 The Search for Sustainable Agriculture
Organic Farming is farming in which no herbicides, pesticides, antibiotics, or genetically modified products are used. The distance food travels from field to table is referred to as food miles. This distance has a negative impact on the environment because of the use of and emissions of fossil fuels. 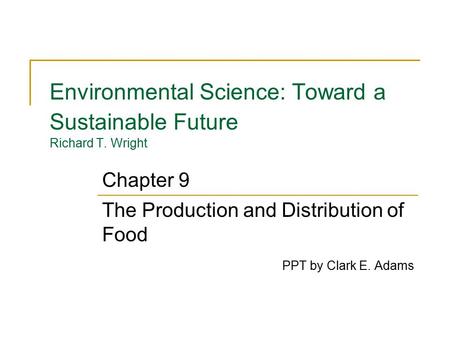 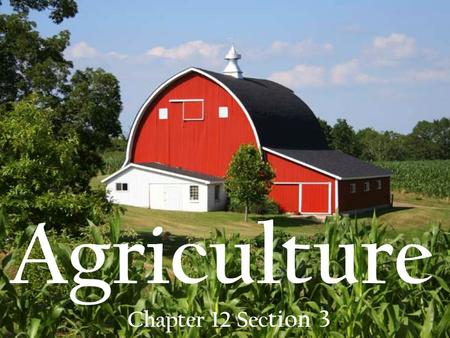 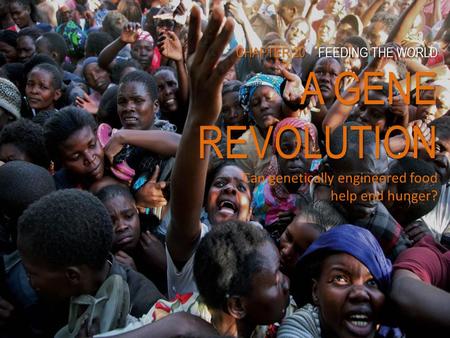 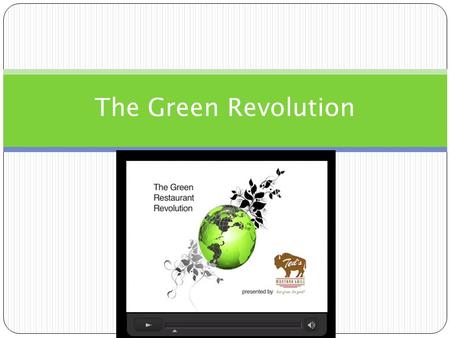 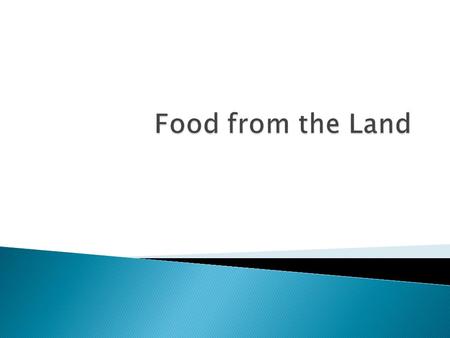  How has television influenced public response to famine and world hunger issues?  In 1984 on TV we saw images of a famine in Ethiopia. This was not. 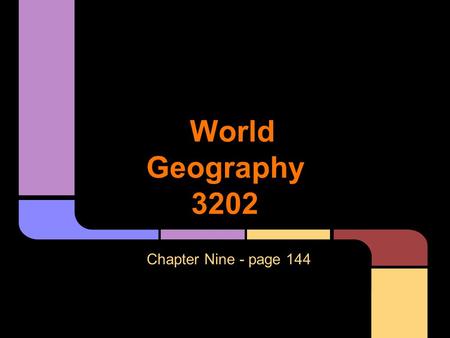 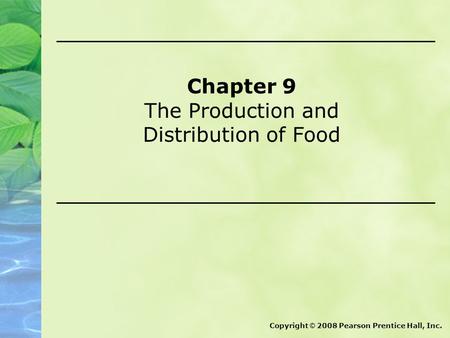 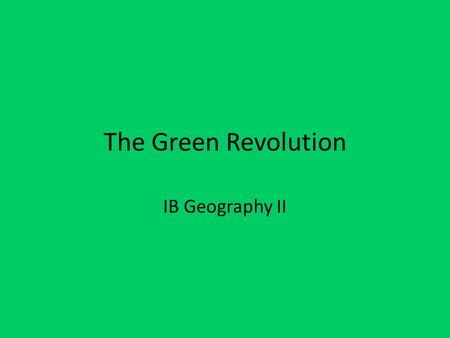