2 Magnetic Induction Demonstrations
Ammeter for overhead projector which measures the current in a coil. Under what circumstances is a current induced in the coil? How do we get the largest current? Disk launcher with Al ring Slit ring Fe ring Bakelite ring coils with bulbs

3 Electric Currents produce Magnetic Fields
Chapter 22: Electric currents (in a wire, in a plasma, in a fluid solution, inside an atom) produce a disturbance in the surrounding space called the magnetic field. This magnetic field produces forces on any other macroscopic or microscopic currents. Example: MRI: Magnetic field (several Tesla) from superconducting solenoid induces a net alignment of the microscopic currents inside each and every proton at the center of the Hydrogen atoms in your body

5 Magnetic Flux For a “loop” of wire (not necessarily circular) with area A, in an external magnetic field B, the magnetic flux is: A = area of loop q = angle between B and the normal to the loop SI units of Magnetic Flux: 1 T·m2 = 1 weber = 1 Wb

8 Faraday’s Law of Induction
Faraday’s Law: The instantaneous emf in a circuit (w/ N loops) equals the rate of change of magnetic flux through the circuit: The minus sign indicates the direction of the induced emf. To calculate the magnitude:

9 Examples of Induced Current
Any change of current in primary induces a current in secondary.

11 Induction by Relative Motion
When a permanent magnet moves relative to a coil, the magnetic flux through the coil changes, inducing an emf in the coil. In a) the magnitude of the flux is increasing In c) the flux is decreasing in magnitude. In a) and c) the induced current has opposite sign. v

12 Induction by Rotational Motion
As a coil rotates in a constant magnetic field (uniform or not) the flux through the loop changes, inducing an emf in the coil.

13 Walker Problem 10, pg. 778 This is a plot of the magnetic flux through a coil as a function of time. At what times shown in this plot does (a) the magnetic flux and (b) the induced emf have the greatest magnitude?

15 Lenz’s Law Lenz’s Law: An induced current always flows in a direction that opposes the change that caused it. N S Induced current Induced B field Magnet moving down toward loop In this example the magnetic field in the downward direction through the loop is increasing. So a current is generated in the loop which produces an upward magnetic field inside the loop to oppose the change.

16 Walker Problem 24, pg. 779 The figure shows a circuit containing a resistor and an uncharged capacitor. Pointing into the plane of the circuit is a uniform magnetic field B. If the magnetic field increases in magnitude with time, which plate of the capacitor (top or bottom) becomes positively charged?

18 If the moving conductor is part of a circuit, the flux through the circuit will change with time and a current will be induced (Area of loop = Ls): x v L R s

19 Walker Problems 30-31, pg. 780 The figure shows a zero-resistance rod sliding to the right on two zero-resistance rails separated by the distance L = 0.45 m. The rails are connected by a 12.5 W resistor, and the entire system is in a uniform magnetic field with a magnitude of 0.75 T. (a) If the velocity of the bar is 5.0 m/s to the right, what is the current in the circuit? (b) What is the direction of the current in the circuit? (c) What is the magnetic force on the bar? (d) What force must be applied to keep the bar moving at constant velocity?

20 Eddy Currents When a conductor is moved in a magnetic field, there is a force on the electrons, which then move in the metal. This movement is called an eddy current.  The induced currents cause magnetic fields which tend to oppose the motion of the metal.

22 Generator A coil of wire turns in a magnetic field. The flux in the coil is constantly changing, generating an emf in the coil.

23 Self-Inductance If you try to change the current in a circuit instantaneously, the response will instead be gradual. This is because the circuit produces a self-induced emf to initially oppose any changes as prescribed by Lenz’s Law. This effect is known as self-induction. This does not violate the Newtonian principle of no-self-forces, because in effect individual electrons in the current are exerting forces on the other electrons in the same circuit.

24 Inductance The self induced emf is given by:
where L is called the inductance of the circuit. The magnetic flux through the loop, produced by current in the loop, is proportional to the current. The inductance L is the constant of proportionality. The unit of inductance is the Henry 1 H = 1 T·m2/A = 1 (T·m2/s) (s/A) = 1 V·s/A Note that inductance, like capacitance, is purely geometrical.

27 RL Circuits We can construct a circuit from inductors and resistors. The circuit will behave just like an RC circuit, with a time constant given by: t = L/R

28 Walker Problem 45, pg. 780 (a) How long does it take for the current in an RL circuit with R = 130 W and L = 63 mH to reach half its final value? (b) If the emf in the circuit is 10 V, what is the current in this circuit two characteristic time intervals after closing the switch?

30 Transformers A transformer is a device used to change the voltage in a circuit. AC currents must be used. 120 V in your house 75,000 V in the power lines p = primary s = secondary 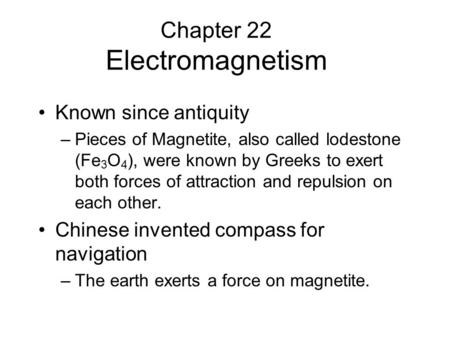