1 The Life Cycle of Stars

3 The Life of Stars Stars have a life cycle that goes from Birth to Death and undergo various changes during their life cycle.

4 The Birth of Stars Stars are formed by the collapse of large clouds of interstellar matter – which is mostly hydrogen gas. The raw ingredients of a star are produced in nebulae.

5 Forming a Protostar The nebula’s gas and dust come closer together, forming a protostar. As more material is packed into the protostar, the centre gets hotter and hotter until a nuclear fusion reaction begins.

6 The main Sequence Star Once the fusion reactions start a main sequence star, like our Sun, is formed. In these reactions atoms of hydrogen are fused together to form helium with vast amounts of heat and light given out.

7 Death of a star Stars have a limited amount of hydrogen fuel which eventually runs out. Those stars, like our Sun will last for about 10 billion years before this happens. Eventually when all of the hydrogen has been consumed the star expands massively in diameter to become either a red giant or red supergiant – depending upon the size of the original star.

9 Stars the size of our Sun
A star the size of our Sun will start to use helium as a fuel producing carbon. It also begins burning hydrogen in its atmosphere and will expand 100 times to become the red giant When this happens to our Sun (in about 4 billion years) all inner planets and the Earth will be incinerated.

11 Stars the size of our Sun
Outer layers of the star and the carbon within them are blown away to form clouds in space which form new stars and planets (planetery nebula). Without the pressure produced by the nuclear reactions the remaining centre collapses to form a very dense core called a white dwarf.

13 Stars with a mass ten times the Sun
Stars with a mass 10 x the Sun use up the hydrogen fuel much more rapidly (about 30 million years) and become a red supergiant. The inner core collapses in less than a second causing a huge explosion called a supernova.

15 Stars with a mass ten times the Sun
The supernova explosion blasts matter into space and shines for about a month. The remains of the star form a neutron star having a mass three times the Sun but with a diameter of only 20 kilometres! A teaspoon of matter from a neutron star would have a mass of a billion tonnes!

16 Pulsars A pulsar is a rapidly rotating neutron star with a strong magnetic field. A pulsar emits radio waves that sweep across space as it rotates.

17 Black Holes If a star is massive enough, it collapses even more than a neutron star to form a black hole – an object so dense that anything close by will be drawn into it by its overpowering gravity.

19 THE TRIFID NEBULA. A 'STELLAR NURSERY', 9,000 LIGHT YEARS FROM HERE, IT IS WHERE NEW STARS ARE BEING BORN.

20 THE PERFECT STORM, A SMALL REGION IN THE SWAN NEBULA, 5,500 LIGHT YEARS AWAY, DESCRIBED AS 'A BUBBLY OCEAN OF HYDROGEN AND SMALL AMOUNTS OF OXYGEN, SULPHUR AND OTHER ELEMENTS'.

21 THE ANT NEBULA, A CLOUD OF DUST AND GAS WHOSE TECHNICAL NAME IS MZ3, RESEMBLES AN ANT WHEN OBSERVED USING GROUND-BASED TELESCOPES. THE NEBULA LIES WITHIN OUR GALAXY BETWEEN 3,000 AND 6,000 LIGHT YEARS FROM EARTH.

22 NEBULA NGC 2392, CALLED ESKIMO BECAUSE IT LOOKS LIKE A FACE SURROUNDED BY A FURRY HOOD. THE HOOD IS, IN FACT, A RING OF COMET-SHAPED OBJECTS FLYING AWAY FROM A DYING STAR. ESKIMO IS 5,000 LIGHT YEARS FROM EARTH. 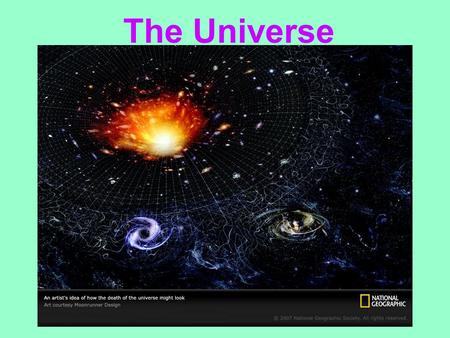 The Universe. The Universe is….. All matter, including earth, galaxies, and intergalactic space.