5 Chunks of Knowledge PDMs are structurally independent Each module has some intrinsic meaning to the domain expert, i.e., is a “chunk” of knowledge PDMs are activated by patterns of data in working memory Why chunk knowledge Facilitate incremental expansion of the knowledge base Permit system to trace and explain its behavior in a simple and effective way Facilitate isolation of effective problem solving knowledge

10 Rule Based System Adding New Rules Define conditions for taking action Define the antecedent Define the action to be taken Define the consequent Data examination Comparing the patterns in the antecedent with the elements in working memory Antecedent patterns can be Simple strings, complex graphs Arbitrary pieces of code which can inspect WMEs Working memory might be implemented as Simple lists, trees, etc.

15 Example Rule Based System Scheduling Rules are in ordered list Patterns checked against wm in order NOTE: A pattern in the antecedent of a rule can be satisfied only once by a given data element Otherwise system would never halt First rule to have conditions satisfied (i.e., patterns matched) will be fired After rule is fired, go back to top of list and start again Continue until no more rules with satisfied antecedents Display contents of wm and then halt

18 Sample Run … Interpreter notices that condition of Rule #2 is satisfied ”it is going to rain today” is in wm Action taken by Rule #2 is taken ”you should take a rain coat to work” is added to wm Interpreter realizes that no more rules have their conditions satisfied so Displays contents of wm to user and halts This simple interpreter is an example of a forward chaining OR data driven interpreter.

21 A Modified Interpreter Given some initial premise to prove, the interpreter will perform the following actions: Check to see if premise is already in wm If so, say premise is true and return Check to see if there are any rules in KB whose action would add premise to wm Place rule pointer at next position If just beginning, place pointer at the first rule Otherwise, advance pointer to the next rule in the list Take the first rule, starting with the rule being pointed to by the rule pointer, satisfying this requirement and move the rule pointer to it

22 A Modified Interpreter If no rules satisfy requirement then: If the premise is the original premise, then tell the user that the premise is false and return Else, ask the user: If the user answers true, then add element to wm If the user answers false, don’t Return Else, for the rule being pointed to, call the interpreter recursively on each pattern in the antecedent Each pattern in the antecedent is passed to the interpreter as a premise to be proved in order of appearance If all premises have been determined to be true Fire the rule If the element added to wm as a result of the rule firing is the original premise, then inform the user that the premise is proven Return Else, try to find the next relevant rule and repeat the process

23 Sample Run Start with an empty wm Give the premise ”you should take a rain coat to work” to the interpreter to be proved Recursion Level 0: Interpreter checks to see if the element is already in wm and notices that it is not Places the rule pointer at Rule #1 Starting with Rule #1 it checks to see which rule can conclude the given premise

29 Rule Based Programming The same form of rules can be used to: Write a program to perform a specific task Given A it performs B Model a system If the system is observed to do B when A occurs, this is modeled by the rule ”if A then B” Represent judgemental knowledge and apply it If A implies B and A is true, then assume B is true 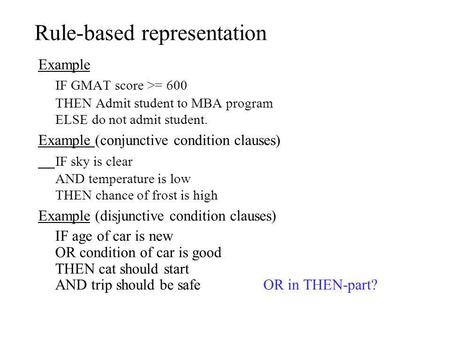 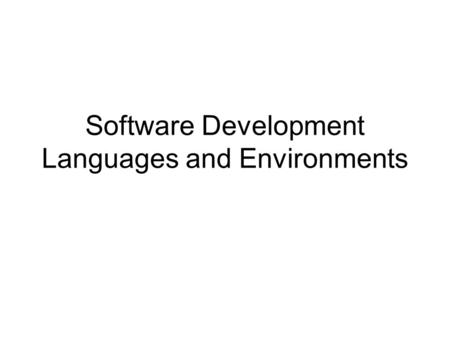 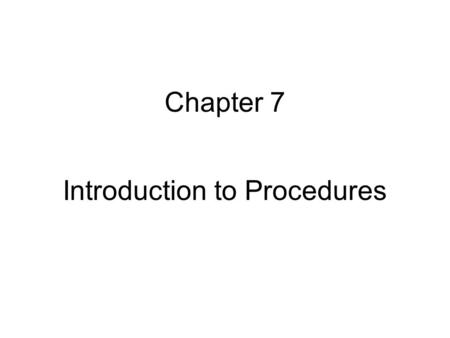 Chapter 7 Introduction to Procedures. So far, all programs written in such way that all subtasks are integrated in one single large program. There is. 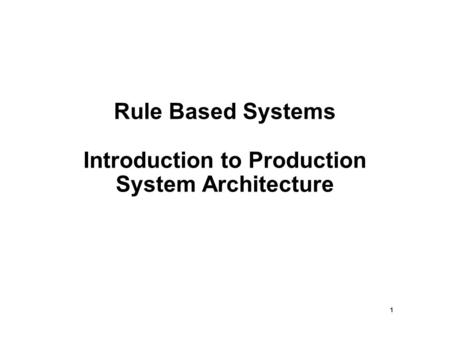 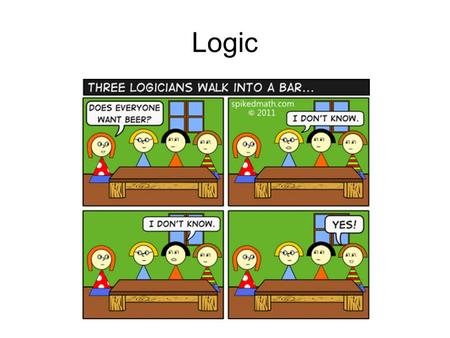 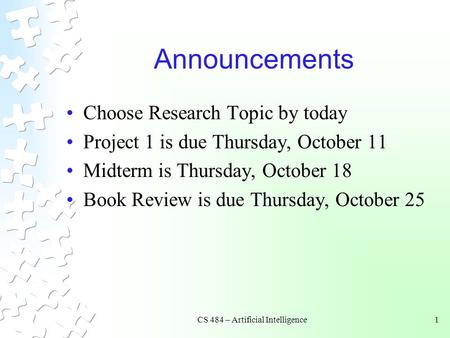 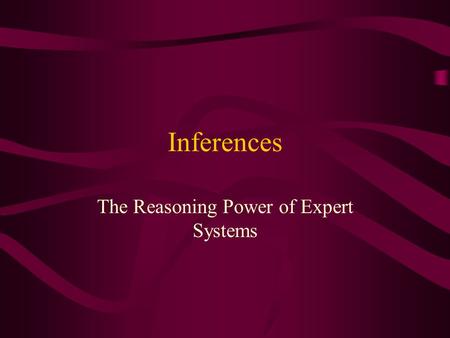 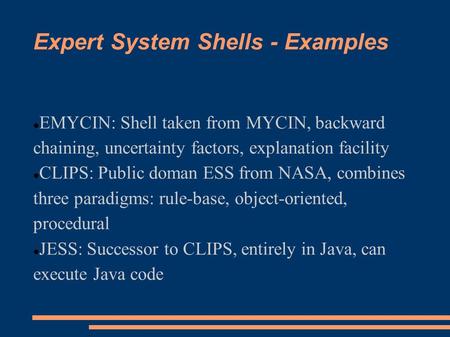 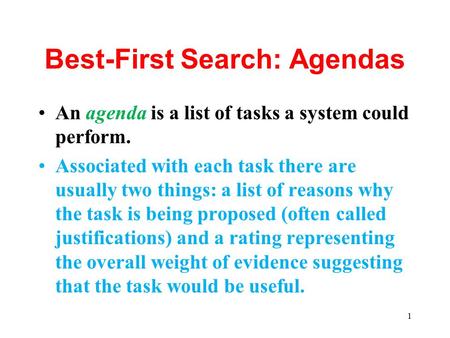 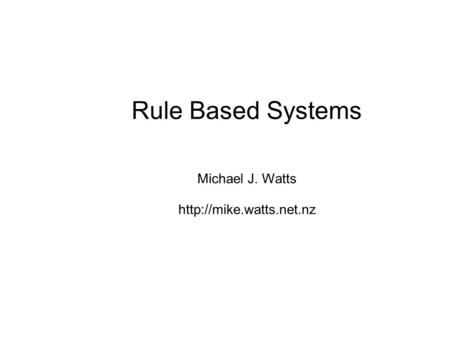 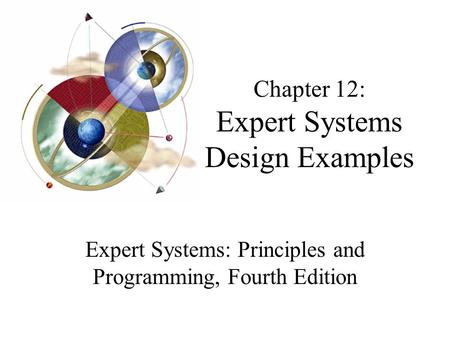 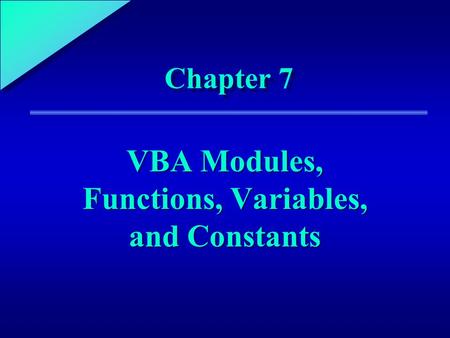 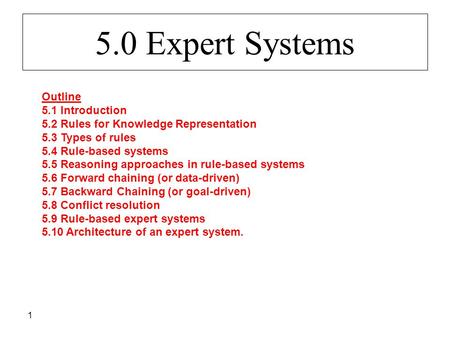 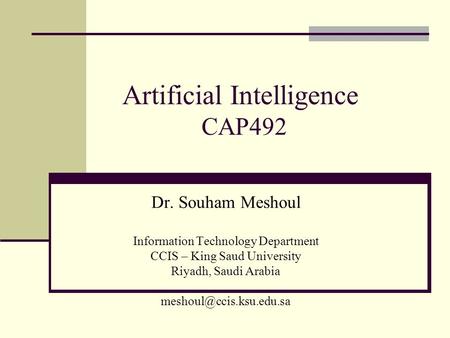 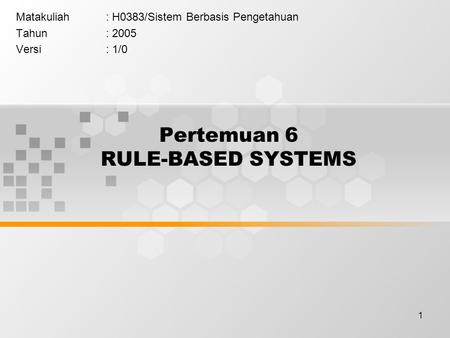