Presentation on theme: " This chapter addresses the following: ◦ How does government control the amount of money in the economy? ◦ Which government agency is responsible for."— Presentation transcript:

2  This chapter addresses the following: ◦ How does government control the amount of money in the economy? ◦ Which government agency is responsible for exercising this control? ◦ How are banks and bond markets affected by the government’s policies?

3  The fed’s control over the supply of money is the key mechanism of monetary policy. n Monetary policy is the use of money and credit controls to influence macroeconomic activity.

4  Each of the twelve (12) Federal Reserve banks act as a central banker for the private banks in their region.

6  The Fed is controlled by a seven person Board of Governors.  Each governor is appointed to a 14-year term by the President (with confirmation by the U.S. Senate).

7  The long term is intended to give the Fed a strong measure of political independence. n The President selects one of the governors to serve as chairman for a 4-year term.

11  The fed directly alters the lending capacity of the banking system by changing the reserve requirement.

13  By raising the required reserve ratio, the Fed can immediately reduce the lending capacity of the banking system.

14  A change in the reserve requirement causes changes in: l Excess reserves. l The money multiplier. l The lending capacity of the banking system.

16  Excess reserves earn no interest.  Banks have a tremendous profit incentive to keep their reserves as close to their required reserve level as possible.

19  Reserves borrowed in this manner are called “federal funds” and are lent for short periods - usually overnight.

20  A bank that is low on reserves can also sell securities.  Banks use some of their excess reserves to purchase government bonds.

21  Discounting refers to the Federal Reserve lending of reserves to private banks.  A bank can deal with a reserve shortage by going to the Fed’s “discount window” to borrow reserves directly.

22  The discount rate is the rate of interest the Federal Reserve charges for lending reserves to private banks.

23  By raising or lowering the discount rate, the Fed changes the cost of money for banks and the incentive to borrow reserves.

24  Open-market operations are the principal mechanism for directly altering the reserves of the banking system.

25  The portfolio decision is the choice of how (where) to hold idle funds.  People do not hold all their idle funds in transactions accounts or cash.

26  The Fed’s open-market operation focus on the portfolio choices people make.  The Fed attempts to influence the choice by making bonds more or less attractive, as circumstances warrant.

29  Not all of us buy and sell bonds, but a lot of consumers and corporations do.  A bond is a certificate acknowledging a debt and the amount of interest to be paid each year until repayment.  It is nothing more than an IOU.

30  The current yield paid on a bond is the rate of return on a bond. n It is the annual interest payment divided by the bond’s price.

31  A principal objective of Federal Reserve open market activity is to alter the price of bonds, and therewith their yields.

32  The less you pay for a bond, the higher its yield.  Federal Reserve open-market activity alters the price of bonds, and their yields.  By doing so, the Fed makes bonds a more or less attractive alternative to holding money.

33  Open market operations are Federal Reserve purchases and sales of government bonds for the purpose of altering bank reserves.

34  If the Fed offers to pay a higher price for bonds, it will effectively lower bond yields and market interest rates.  By buying bonds, the Fed increases bank reserves.

37  The volume of trading in U.S. government securities exceeds $100 billion per day.  Each dollar in reserves represents approximately $10 in potential lending due to the money multiplier.

Download ppt " This chapter addresses the following: ◦ How does government control the amount of money in the economy? ◦ Which government agency is responsible for." 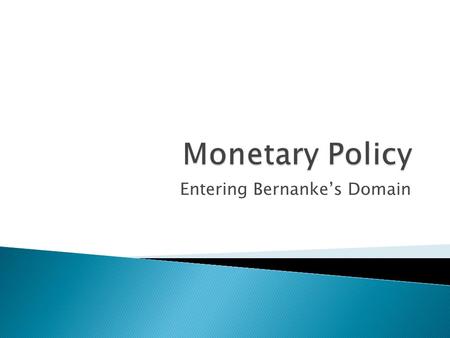 Entering Bernanke’s Domain.  Fundamental Questions ◦ What is money? ◦ Where does money come from? ◦ What role do banks play in the macro economy?  Important.