4 European Exploration Where did the English establish their first successful colony? Jamestown What happened in the first two years at Jamestown? Disease, starvation and struggle What two factors turned the colony around? John Smith’s leadership and tobacco

7 Middle and South Colonies List 3 ways that slaves resisted in the southern colonies. Working slow, pretending not to understand, rebellion Summarize the Stono Rebellion. Rebellion in South Carolina where slaves attacked whites and headed for freedom down the Stono River toward Seminole territory in Florida. Define the Middle Passage. Brutal journey from West Africa to the Americas aboard slave ships with a 20% mortality rate

8 Colonial Life up to 1750 Was education more important to the southern colonies, middle colonies, or northern colonies in this time period? Explain. Northern colonies where people read the Bible on their own and needed to be able to read. Towns were required to provide schools for children. What was Harvard College originally established to do in 1636, the oldest institution of higher education in the US? Train ministers Describe the general layout of a New England town. Town hall for political gatherings and church for worship at the center of the town with houses densely put together and farm land on the outside. Schools and stores interspersed.

11 Colonial Life up to 1750 How were southern towns designed in terms of layout? Spread out along rivers or spread out with plantations for maximizing growing and export. Plantations the center of the community. Was life expectancy higher in New England or in the southern colonies? New England How many of the 13 colonies used slavery in the early 1700s? All of them

12 Economy and Politics What was the economic system in the colonies? Mercantilism What policy put this system into place? The Navigation Acts Why was mercantilism and the Navigation Acts not enforced before the French and Indian War? Too difficult, Britain too occupied Were the colonies democratic or not? Explain. To a large degree. Governors were controlled by the crown but assemblies did much of the governing and even controlled governors salaries so had more power.

13 Ideas Who was the most important Enlightenment thinker to influence the political ideas of the colonies? John Locke Identify one of his ideas. People had natural rights and limited government existed to protect those rights. Identify another. When those rights were taken away, it was the people’s responsibility to rebel. How were these ideas formalized in the American colonies? Common Sense by Thomas Paine and The Declaration of Independence.

14 Ideas What was the most significant religious movement in the 1700s in the colonies? Great Awakening What was a major impact of the Great Awakening? New groups of Protestants started, churches became more decentralized and people converted or became reignited in poorer communities throughout the middle colonies and south, and many slaves converted as well. 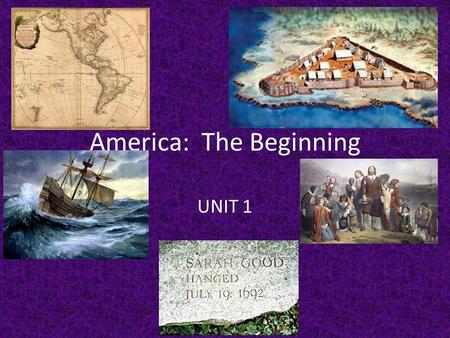 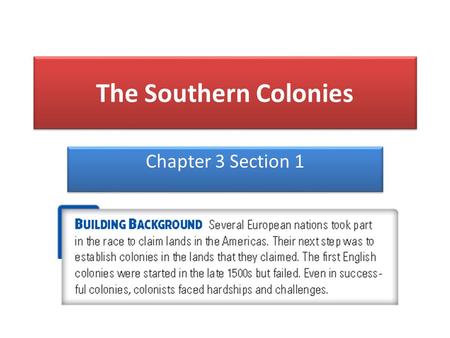 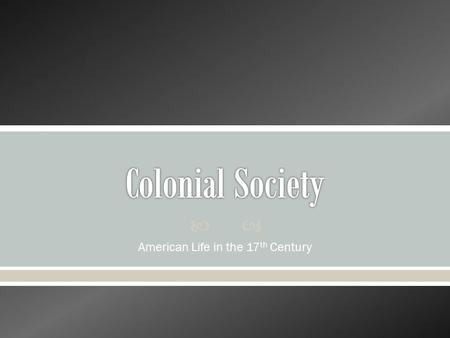 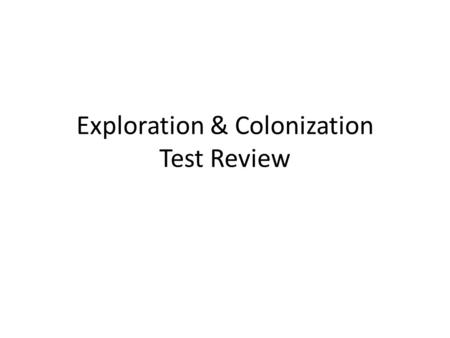 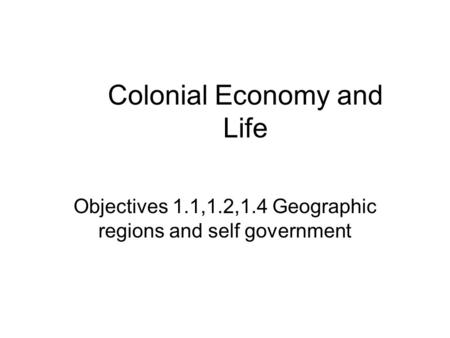 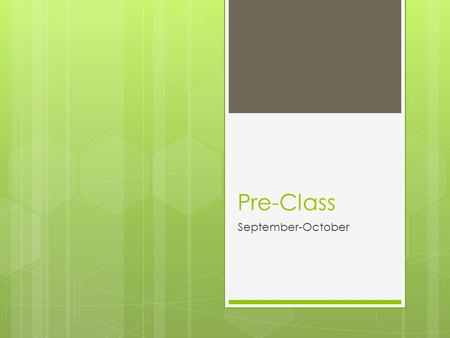 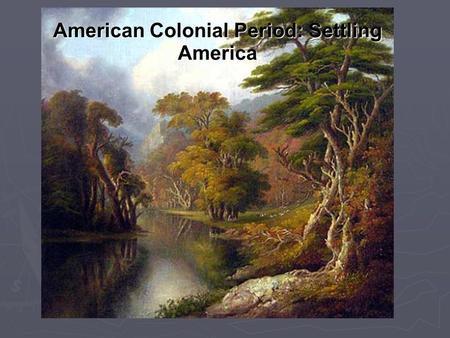 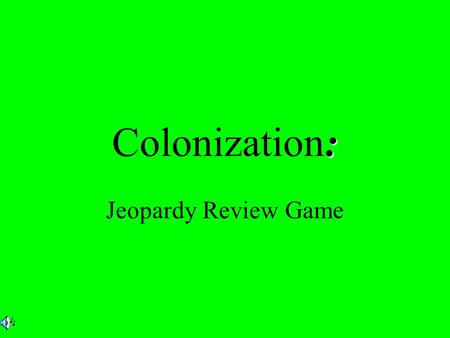 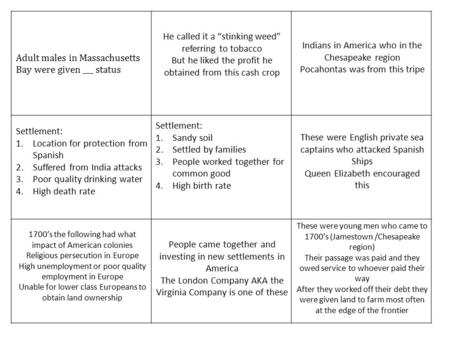 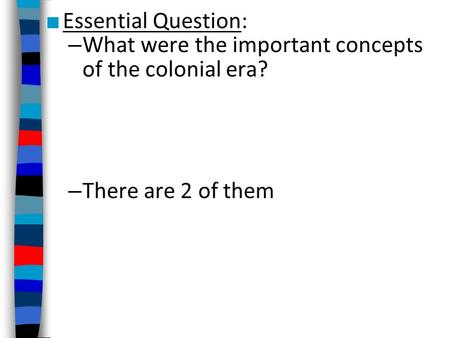 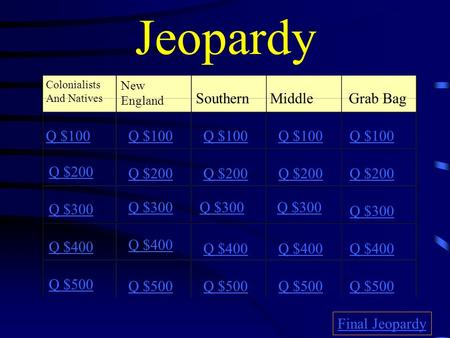 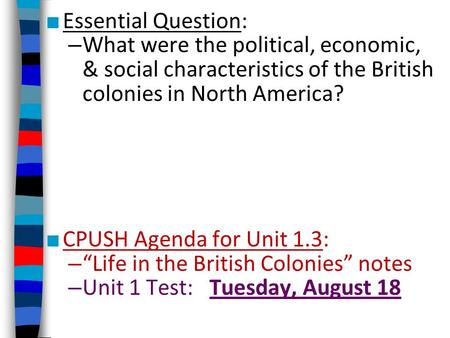 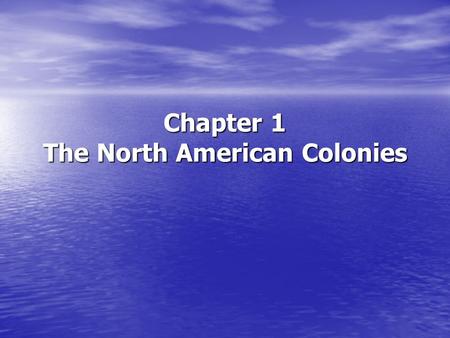 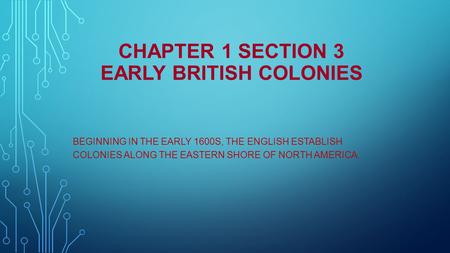 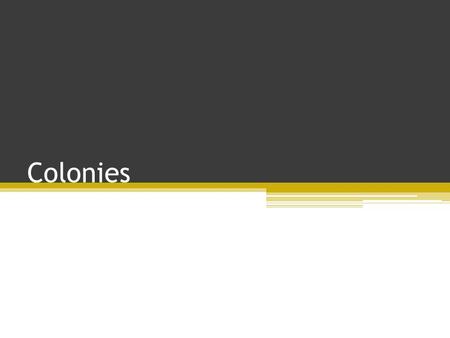