4 The Vector Product Defined
Given two vectors, and The vector (cross) product of and is defined as a third vector, C is read as “A cross B” The magnitude of vector C is AB sin q q is the angle between and

6 Properties of the Vector Product
The vector product is not commutative. The order in which the vectors are multiplied is important To account for order, remember If is parallel to (q = 0o or 180o), then Therefore

7 More Properties of the Vector Product
If is perpendicular to , then The vector product obeys the distributive law

10 Vector Products of Unit Vectors, cont
Signs are interchangeable in cross products and

18 Angular Momentum of a Particle, Example
The vector is pointed out of the diagram The magnitude is L = mvr sin 90o = mvr sin 90o is used since v is perpendicular to r A particle in uniform circular motion has a constant angular momentum about an axis through the center of its path

20 Angular Momentum of a System of Particles, cont
Any torques associated with the internal forces acting in a system of particles are zero Therefore, The net external torque acting on a system about some axis passing through an origin in an inertial frame equals the time rate of change of the total angular momentum of the system about that origin This is the mathematical representation of the angular momentum version of the nonisolated system model.

22 System of Objects, Example
The masses are connected by a light cord that passes over a pulley; find the linear acceleration Conceptualize The sphere falls, the pulley rotates and the block slides Use angular momentum approach

23 System of Objects, Example cont
Categorize The block, pulley and sphere are a nonisolated system Use an axis that corresponds to the axle of the pulley Analyze At any instant of time, the sphere and the block have a common velocity v Write expressions for the total angular momentum and the net external torque

24 System of Objects, Example final
Analyze, cont Solve the expression for the linear acceleration Finalize The system as a whole was analyzed so that internal forces could be ignored Only external forces are needed

27 Angular Momentum of a Rotating Rigid Object, final
The rotational form of Newton’s Second Law is also valid for a rigid object rotating about a moving axis provided the moving axis: (1) passes through the center of mass (2) is a symmetry axis If a symmetrical object rotates about a fixed axis passing through its center of mass, the vector form holds: where is the total angular momentum measured with respect to the axis of rotation

29 Conservation of Angular Momentum
The total angular momentum of a system is constant in both magnitude and direction if the resultant external torque acting on the system is zero Net torque = 0 -> means that the system is isolated For a system of particles,

30 Conservation of Angular Momentum, cont
If the mass of an isolated system undergoes redistribution, the moment of inertia changes The conservation of angular momentum requires a compensating change in the angular velocity Ii wi = If wf = constant This holds for rotation about a fixed axis and for rotation about an axis through the center of mass of a moving system The net torque must be zero in any case

35 Gyroscope A gyroscope can be used to illustrate precessional motion
The gravitational force produces a torque about the pivot, and this torque is perpendicular to the axle The normal force produces no torque

36 Gyroscope, cont The torque results in a change in angular momentum in a direction perpendicular to the axle. The axle sweeps out an angle df in a time interval dt. The direction, not the magnitude, of the angular momentum is changing The gyroscope experiences precessional motion

37 Gyroscope, final To simplify, assume the angular momentum due to the motion of the center of mass about the pivot is zero Therefore, the total angular momentum is due to its spin This is a good approximation when is large

38 Precessional Frequency
Analyzing the previous vector triangle, the rate at which the axle rotates about the vertical axis can be found wp is the precessional frequency This is valid only when wp << w

40 New Analysis Model 1 Nonisolated System (Angular Momentum)
If a system interacts with its environment in the sense that there is an external torque on the system, the net external torque acting on the system is equal to the time rate of change of its angular momentum:

41 New Analysis Model 2 Isolated System (Angular Momentum)
If a system experiences no external torque from the environment, the total angular momentum of the system is conserved: Applying this law of conservation of angular momentum to a system whose moment of inertia changes gives Iiwi = Ifwf = constant 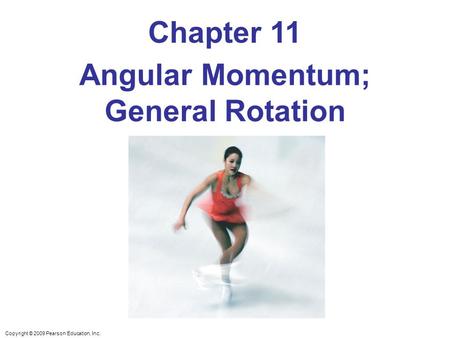 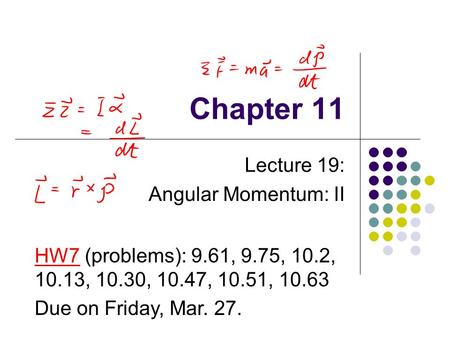 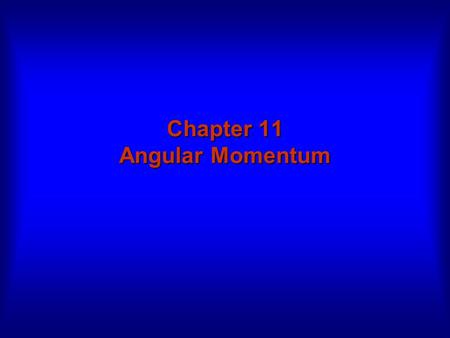 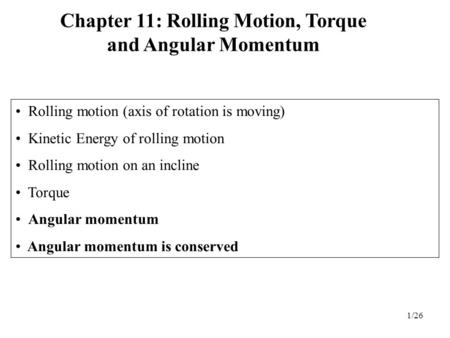 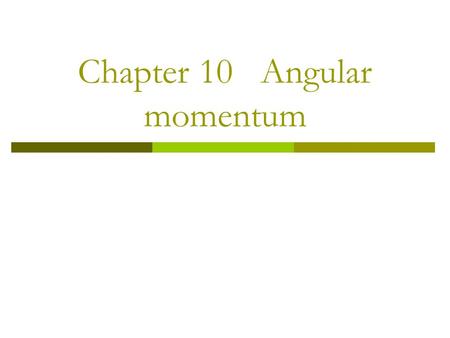 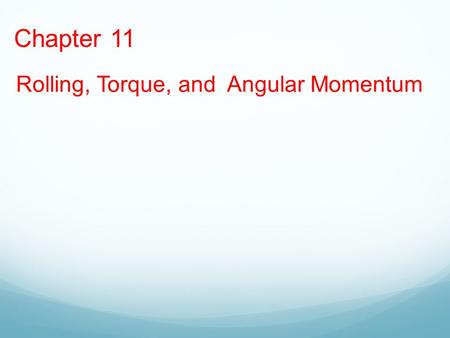 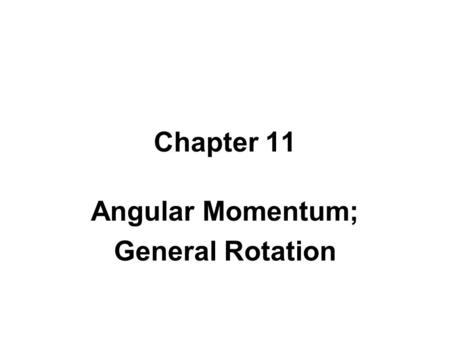 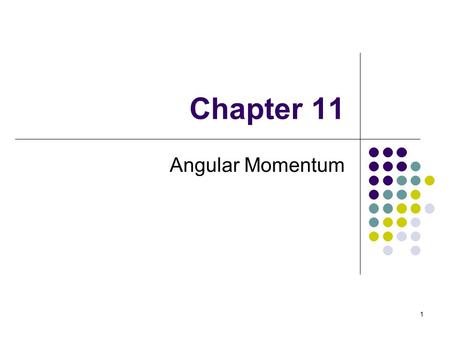 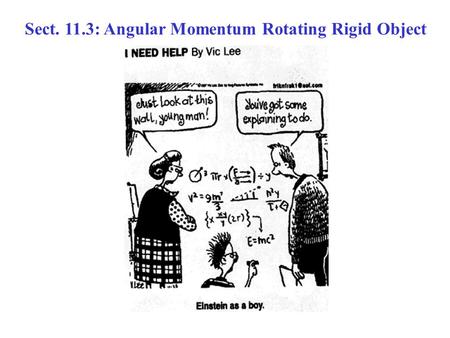 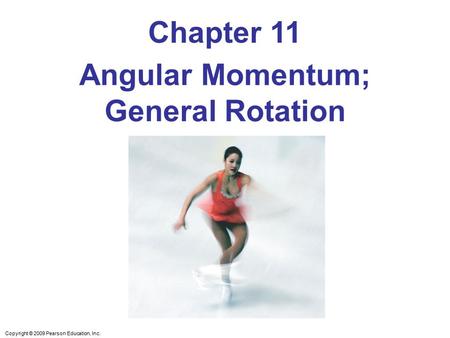 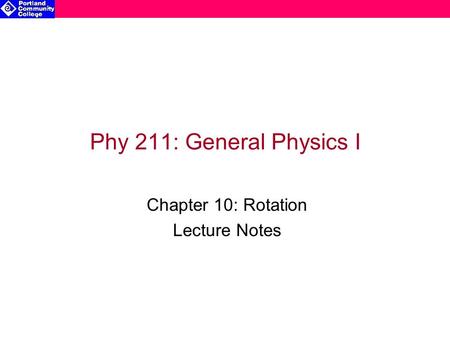 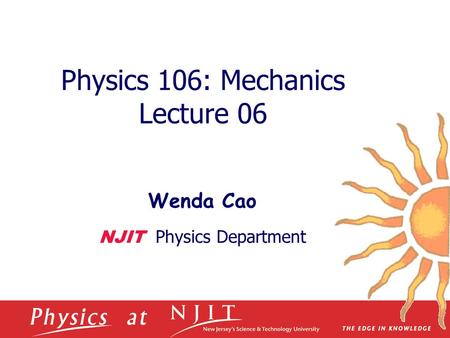 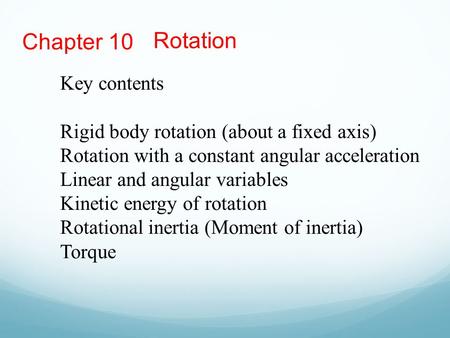 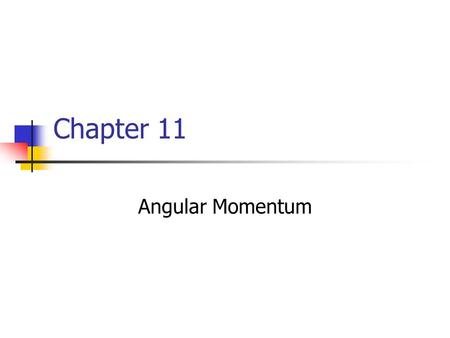