2 Human Impact on the Atmosphere
The atmosphere provides gases that organisms need to survive, including oxygen and carbon dioxide. The atmosphere absorbs harmful high-energy radiation coming from space. 2

9 How does pollution from human activities produce acid precipitation?
Precipitation such as rain, sleet, or snow that contains acids from air pollution is called acid precipitation. Burning fossil fuels releases sulfur dioxide and nitrogen oxides into the air. When these gases mix with water in the atmosphere, they form sulfuric acid and nitric acid. 9

11 Human Impact on the Atmosphere
What are some effects of acid precipitation? Acid precipitation can cause soil and water to become more acidic than normal. Changes in soil acidity cause soil to lose some of the nutrients that plants need. 11

14 The Air Quality Index (AQI) is a number used to describe the air quality of a location.
The higher the AQI number, the more people are likely to have health problems linked to air pollution. The air inside a building can become more polluted than the air outside. 14

15 What are some sources of indoor air pollution?
15

16 How can air quality affect health?
Daily exposure to small amounts of air pollution can cause serious health problems. Certain people, such as children, elderly people, and people with health problems, are especially vulnerable to the effects air pollution. Short-term effects include coughing, headaches, and wheezing. Long-term effects include lung cancer and emphysema. 16

18 It is hard to know exactly how much the extra greenhouse gases change the temperatures.
Computer models designed to understand climate change predict that average global temperatures will continue rising. 18

20 How is the ozone layer affected by air pollution?
Earth’s protective ozone layer is thinning over the polar regions, allowing more harmful ultraviolet radiation to reach Earth’s surface. Chemicals called chlorofluorocarbons (CFCs) cause ozone to break down. CFCs once had many industrial uses, but now they are banned. However, CFCs released in the atmosphere decades ago will stay there many more decades, breaking down more ozone. 20

22 Stewardship is the careful and responsible management of a resource.
Stewardship of Earth’s natural resources will ensure that the environment stays clean enough to help keep people and other living things healthy. Any action that helps to maintain or improve the environment is an act of stewardship.

25 There are many ways to generate energy without creating much air pollution.
By developing technology for alternative energy resources, we reduce the amount of pollution created by burning fossil fuels. For example, compact fluorescent lightbulbs help limit air pollution. They use less energy to make the same amount of light.

26 Governments in many countries work independently and together to reduce air pollution.
Because air isn’t contained by borders, some solutions must be international. The Kyoto Protocol is a worldwide effort to limit the release of greenhouse gasses—pollution that can warm the atmosphere. 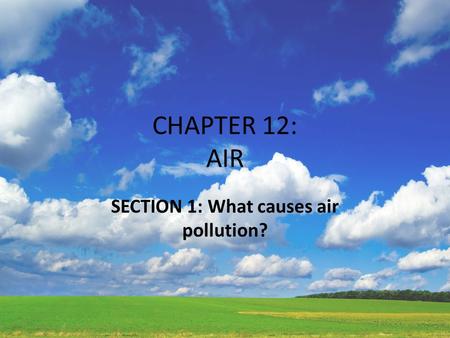 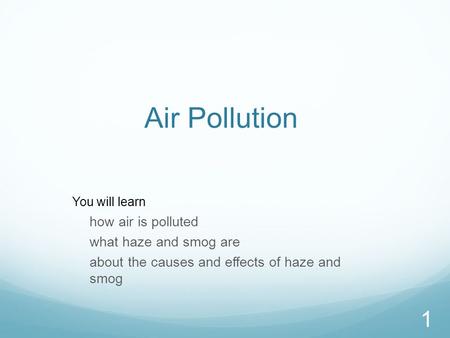