2  Setting: Summer of 1922 on Long Island and in New York City  Point of view: First and Third person  Narrator: Nick Carraway  Protagonists: Nick Carraway and Jay Gatsby  Major conflict: Gatsby attempts to regain the love of Daisy by dazzling her with his great wealth that was amassed illegally  Rising action: Series of events that lead up to Gatsby reuniting with Daisy  Falling action: ??? To be filled in later….I don’t want to spoil the ending.  Climax: To be filled in later….I don’t want to spoil the ending.  Themes: ◦ 1. The Decline of the American Dream ◦ 2. The Spirit of the 1920s ◦ 3. The difference between the social classes ◦ 4. The role of symbols in the human conception of meaning ◦ The role of the past in dreams of the future (provided by Spark Notes)  Symbols: Colors, East/West Egg, The eyes of Dr. T.J. Eckleburg, The valley of ashes  Motifs: (To be covered as novel is read. Please leave space open in your notes.)

3  Narrator: Nick Carraway (Cousin of Daisy Buchanan) ◦ Home is Minnesota, studied at Yale, fought in WWI ◦ Goes to New York to learn the bond business ◦ Non-judgmental, extremely honest, sincere ◦ A good listener ◦ Next door neighbor and friend to Jay Gatsby at West Egg  Protagonist: Jay Gatsby (in love with Daisy Buchanan) ◦ Mysterious, absurdly wealthy young man ◦ Neighbor of Nick Carraway ◦ Famous for extravagant parties ◦ Guests are the wealthy: old rich (East Egg) and new rich (West Egg), famous celebrities and their managers, great athletes, and those who want to be seen ◦ Wealth achieved through “ill-gotten” gain ◦ Extreme optimist ◦ Developed/lived a five year plan to get Daisy ◦ Believes her to be more worthy, wonderful than she really is  Daisy Buchanan (Cousin of Nick): Married to Tom Buchanan ◦ Promised to wait for James Gatz (AKA Jay Gatsby) before he was shipped to Europe in WWI. ◦ Emotionally could not keep her promise as she felt a need to be loved and courted ◦ Married Tom Buchanan, a wealthy, egotistical, self-absorbed man of questionable morals. ◦ Lives across the water from Jay and from Nick in the more fashionable district of East Egg on Long Island  Tom Buchanan : Married to Daisy Buchanan ◦ Wealthy, egotistical Yale man (like Nick) ◦ Arrogant, hypocritical, violent, adulterer ◦ Racist, sexist, believer in the superiority of the white race  Jordan Baker: friend of Daisy Buchanan ◦ Wealthy, competitive golfer. ◦ Lives with her great-aunt ◦ Liar/cheat to get ahead in golf or to cover up mistakes ◦ Love interest of Nick Carraway

4  Myrtle Wilson (Tom’s lover) ◦ Married to George Wilson (garage/gas station owner) ◦ Big, sensuous woman who openly flaunts her affair in New York (George does not know) where she and Tom have a “love nest” ◦ Tom gives her everything she wants as long as he is physically satisfied ◦ Causes Daisy grief by phoning for Tom at home during the dinner hour  George Wilson: faithful, non-motivated husband of Myrtle ◦ Minor character that plays an important role ◦ garage/gas station owner across from the industrial ash dump ◦ Idolizes Myrtle ◦ Has no vision about his future ◦ Lived above the garage for eleven years  Owl Eyes: very minor character ◦ Great reader who is a guest at one of Gatsby’s luxurious parties ◦ Enamored by Gatsby’s library  Klipspringer: very minor character ◦ A free loader who frequently spends the night at Gatsby’s mansion. ◦ No honorable characteristics ◦ Very shallow character of no redeeming value 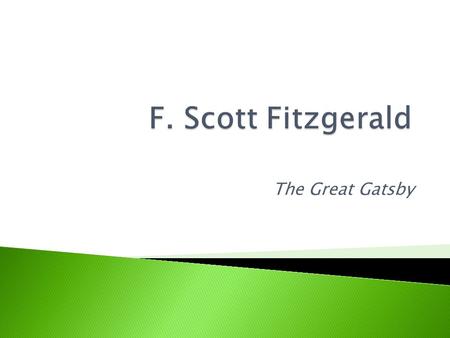 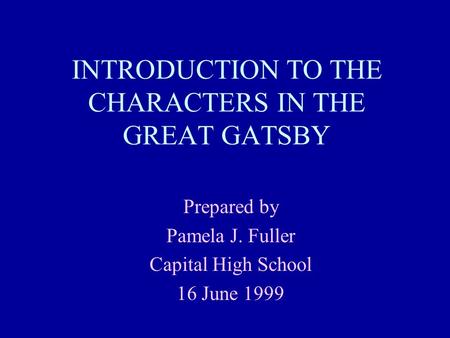 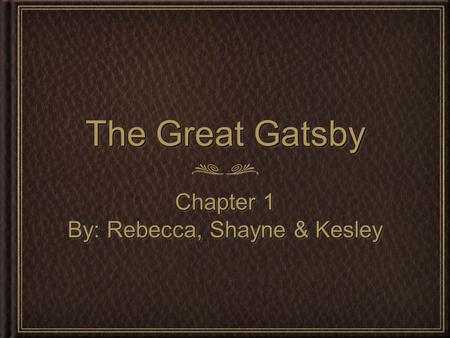