1 Business Law 1 Case Law The hierarchy of the courts

4 Precedent The doctrine of the binding precedent, or stare decisis, refers to the fact, that within the hierarchical structure of the English courts, a decision of a higher court will be binding on a court lower than it. If the precedent was set up by a court of higher or equal status to the court deciding the new case, then the judge in the present case should review the rule of law established in the earlier case. Where the precedent is from a lower hierarchical court, the judge in the new case, may not follow, but certainly will consider it.

5 House of Lords Stands at the top of the English court structure and its decisions are binding on all courts below it. Regards itself as bound by its previous decisions.

6 Court of Appeal It is also bound by its own previous decisions and by the decisions of the House of Lords in civil cases, but there are some exceptions. Along with them, there is also a possibility that the Court of Appeal can ignore a previous decision of its own which is inconsistent with Community law or with a later decision of the European Court.

8 Civil Division Civil actions are between individuals. The state merely provides the legal framework within which they determine and seek to enforce their mutual rights and obligations.

9 Criminal Division Courts in criminal division are not bound to follow their own previous decisions which they consider to have been based on either a misunderstanding or a misapplication of the law. The reason for this is that the criminal courts deal with matters involving individual liberty and therefore require discretion to prevent justice.

10 High Court Hear appeals from courts and tribunals below them in the hierarchy; Bound by the doctrine of stare decisis and must follow the decisions of the House of Lords and Court of Appeal; These decisions are binding on courts inferior in the hierarchy, but not on other High Court judges although they are of strong persuasive authority and tend to be followed in practice.

11 Crown Court They can not create precedent and their decisions can never amount to more than persuasive authority.

12 County and Magistrate’s courts
can not create precedents.

13 Binding precedent The contents of a report can be divided into two categories: Ratio decidendi – it is understood as the statement of the law applied on deciding the legal problem raised by the concrete facts of the case. Obiter dictum – is any statement of law that is not an essential part of the ratio decidendi and they have persuasive authority.

14 Evaluation The division of cases into these two distinct parts is a theoretical procedure. Unfortunately, judges do not actually separate their judgments into the two clearly defined categories and it is up to the person reading a case to determine what the ratio is. 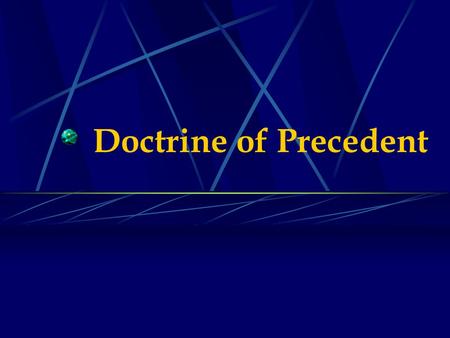 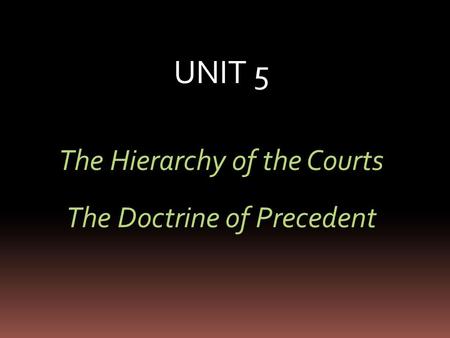