3 7-3 Role-based Access Control (RBAC)‏ In a company, objects that a user can access often do not depend on the identity of the user, but on the user’s job function (role) within the company Salesperson can access customers’ credit card numbers, marketing person only customer names In RBAC, administrator assigns users to roles and grants access rights to roles When a user takes over new role, need to update only her role assignment, not all her access rights Available in many commercial databases

4 7-4 RBAC Extensions RBAC also supports more complex access control scenarios Hierarchical roles “A manager is also an employee” Reduces number of role/access rights assignments Users can have multiple roles and assume/give up roles as required by their current task “Alice is a manager for project A and a tester for project B” User’s current session contains currently initiated role Separation of Duty “A payment order needs to be signed by both a manager and an accounting person, where the two cannot be the same person”

7 7-7 Combination of Auth. Factors Different classes of authentication factors can be combined for more solid authentication Two- or multi-factor authentication Using multiple factors from the same class might not provide better authentication Remember sophisticated Phishing attacks “Something you have” can become “something you know” If token can be easily duplicated, such as magnetic strip on ATM card. That’s why ATM fraud is so wide spread Some banks distribute small devices displaying numbers that change over time. Current number needs to be input for online banking. However, knowing number does not imply physical possession of device

8 7-8 Passwords Probably oldest authentication mechanism used in computer systems User enters user ID and password, maybe multiple attempts in case of error Usability problems Forgotten passwords might not be recoverable (though this has been changing recently, see later)‏ Entering passwords is inconvenient If password is disclosed to unauthorized individual, the individual can immediately access protected resource Unless we use multi-factor authentication If password is shared among many people, password updates become difficult

9 7-9 Password Guessing Attacks Brute-force: Try all possible passwords using exhaustive search It’s possible to test 350,000 Microsoft Word passwords per second on a 3-GHz Pentium 4 For passwords of length 8 consisting only of letters, there are about 2*10 11 possibilities It takes only 600,000 seconds or 166 hours to test all of them Expected wait till success is 83 hours Easy to buy more hardware if payoff is worth it Can make attack harder by including digits and special characters in password However,…

10 7-10 Password Guessing Attacks … exhaustive search assumes that people choose passwords randomly, which is often not the case Attacker can do much better by exploiting this observation For example, Password Recovery Toolkit (PRTK) assumes that a password consists of a root and a pre- or postfix appendage “password1”, “abc123”, “123abc” Root is taken from dictionaries (names, English words,…)‏ Appendage is two-digit combination, date, single symbol,… PRTK could have cracked 55% of 34,000 leaked MySpace passwords in 8 hours Even though passwords turned out to better than passwords from previous studies

11 7-11 Password Guessing Attacks So should we just give up on passwords? Attack requires that attacker has encrypted password file or encrypted document Offline attack Instead attacker might want to guess your banking password by trying to log in to your bank’s website Online attack Online guessing attacks are detectable Bank shuts down online access to your bank account after n failed login attempts (typically n ≤ 5)‏ But! How can an attacker circumvent this lockout?

14 7-14 Password Hygiene Don’t reveal passwords to others In email or over phone If your bank really wants your password over the phone, switch banks Studies have shown that people disclose their passwords for a cup of coffee, chocolate, or nothing at all Caveat of these studies? Don’t enter password that gives access to sensitive information on a public computer (e.g., Internet café)‏ Don’t do online banking on them While traveling, forward your email to a free Webmail provider and use throwaway (maybe weak) password

17 7-17 Defending against Attacks Store an encrypted version of the password in the password file Need to keep encryption key away from attackers As opposed to fingerprints, this approach allows system to (easily) re-compute password if necessary E.g., have system email password to predefined email address when user forgets password Has become the norm for many websites In fact, some people use this reminder mechanism whenever they want to log in to a website This way, they no longer have to remember passwords 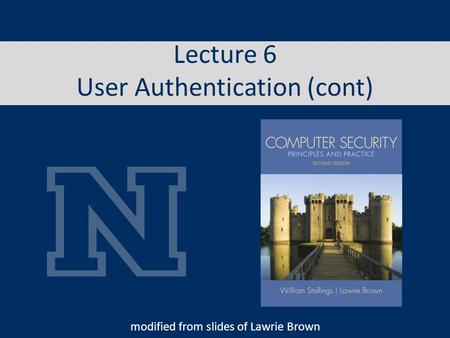 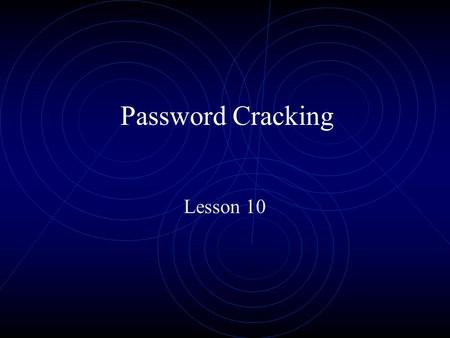 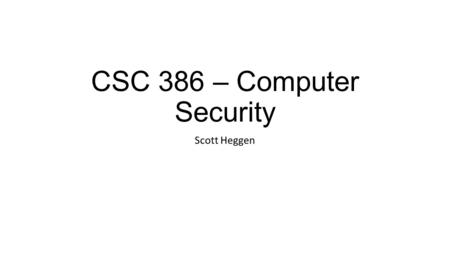 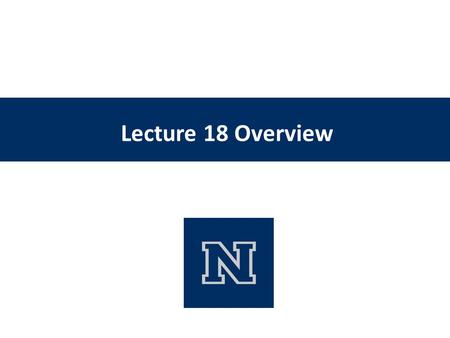 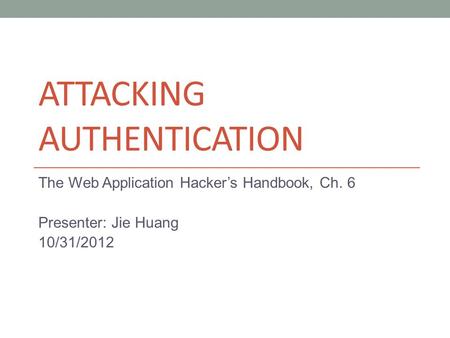 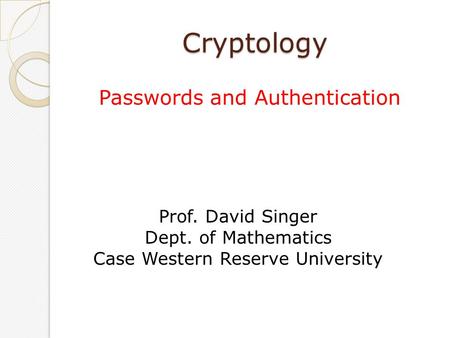 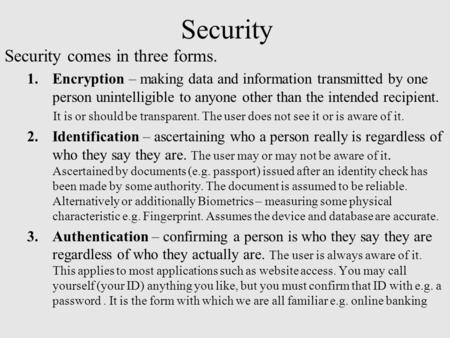 Security Security comes in three forms. 1.Encryption – making data and information transmitted by one person unintelligible to anyone other than the intended. 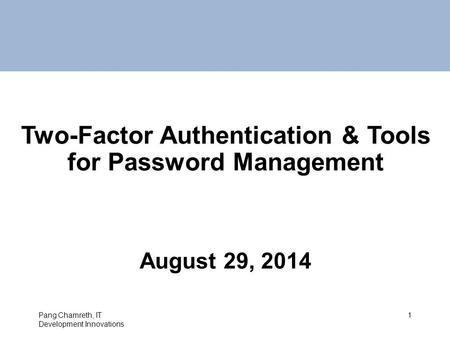 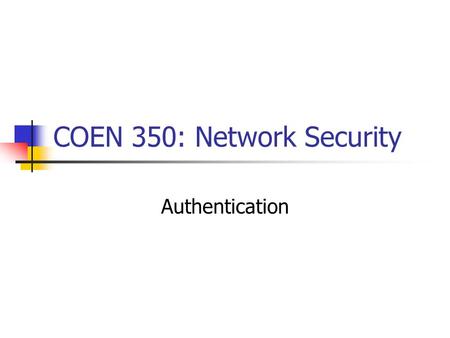 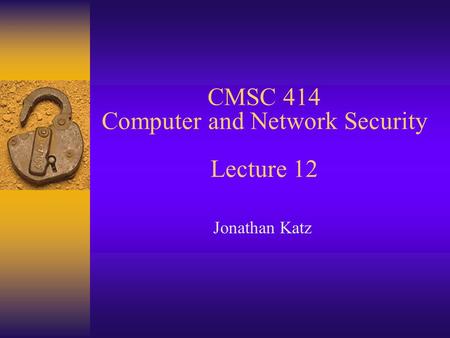 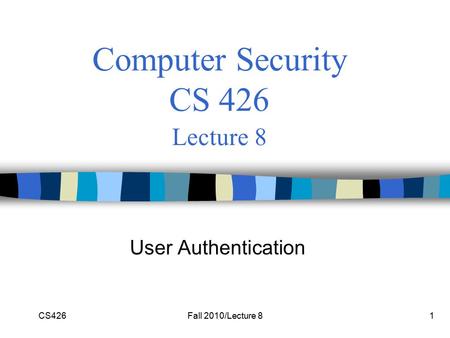 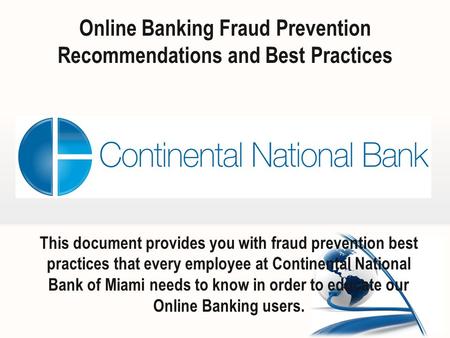 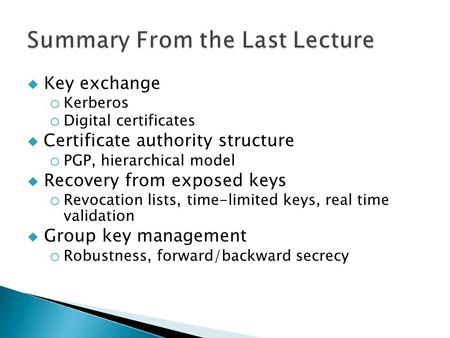 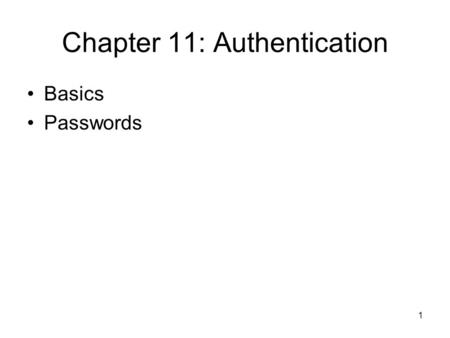 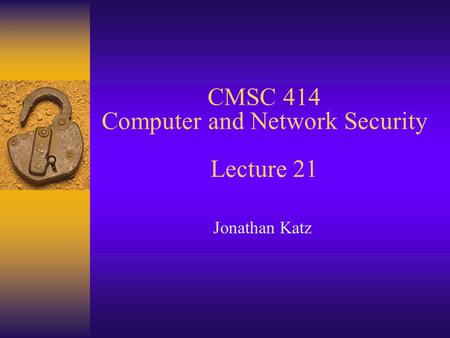 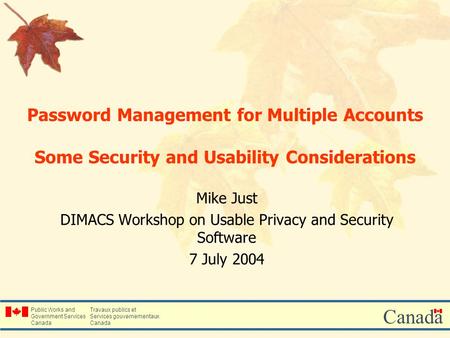 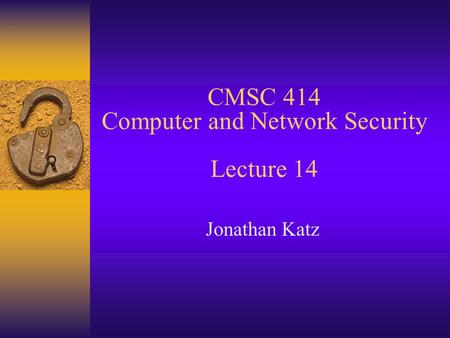 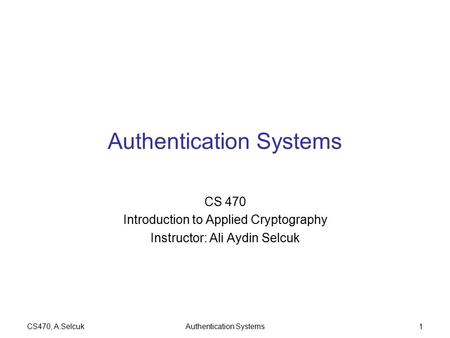 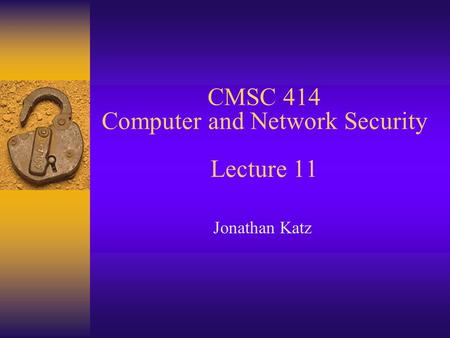