Presentation on theme: "Objectives Identify the sources of the government’s authority to tax."— Presentation transcript:

1 Objectives Identify the sources of the government’s authority to tax.
Describe types of tax bases and tax structures. List the characteristics of a good tax. Identify who bears the burden of a tax.

4 Introduction What are the features of a tax system? Fairness
Simplicity Efficiency Certainty Balance between tax revenue and tax rates

6 Limits on the Government
There are limits A tax must be “for the common defense and general welfare.” cannot bring in money that goes to individual interests. Federal taxes must be the same in every state. The government cannot tax exports, only imports.

7 Progressive Taxes Economists describe taxes based on their structure and according to the tax base. % paid increases as income increases.

10 Elasticities of Demand and Tax Effects
Taxes affect more than just the people who pay them. Producers often pass on a portion of tax to consumers. Generally, the more inelastic the demand, the more easily the seller can shift the tax to consumers. Answer: Elastic

12 Characteristics of a Good Tax
What is a good tax? Simplicity—tax law should be easy to understand Efficiency—the tax should be able to be collected without spending too much time or money Certainty—it should be clear when the tax is due, how much is due, and how to pay the tax Equity—the tax system should ensure that no one bears too much or too little of the tax Checkpoint Answer: Simplicity, efficiency, certainty, and equity.

13 Determining Fairness How do you measure fairness?
The benefits-received principle holds that a person should pay taxes based on the level of benefits he or she expects to receive from the government. The gasoline tax is an example of the benefits- received principle.

14 Determining Fairness, cont.
The ability-to-pay principle holds that people should pay taxes according to their ability to pay. Good taxes generate enough, but not too much, revenue. Citizens needs are met, but not to such an extensive degree that the tax discourages production.

17 Key Terms, cont. tax credit: a variable amount that taxpayers may subtract from the total amount of their income tax estate tax: a tax on the total value of the money and property of a person who has died gift tax: a tax on the money or property that one living person gives to another tariff: a tax on imported goods tax incentive: the use of taxation to discourage or encourage certain types of behavior

19 Individual Income Taxes
Government’s main source of income What is the difference between individual income taxes and corporate in % Answer: 44%

20 “Pay-As-You-Earn” Taxation
The amount of federal income tax a person owes is determined on an annual basis. You pay your income taxes out of each paycheck. One yearly lump sum would result in failure to pay Helps the government keep income flowing and the tax payer able to pay their taxes

21 Tax Brackets The federal income tax is a progressive tax, which rises with the amount of taxable income. Your range of income puts you in a specific tax bracket. Answer: $4,220 plus 25%

22 Withholdings and Tax Returns
Employers withhold money based upon an estimated amount owed (filled out in a W4) After the calendar year ends, employers give their employees a report of how much income tax has already been paid. (W2) Employees then fill out a tax return to send to the federal government.

27 Unemployment The unemployment tax pays for “unemployment compensation” that people can receive when they are laid off.

28 Other Types of Taxes Excise taxes—a general revenue tax on the sale or manufacture of a good or service such as gasoline, cigarettes, and other items Import taxes—Tariffs, or import taxes, are taxes placed on imported goods. Estate taxes—a tax on the total value of the money and property of a person who has died As of 2008, if the total value of an estate is $2 million or less, there is no federal estate tax.

33 Federal Spending There are two types of government spending.
Mandatory Spending – Required spending by the govt. by law Social Security Medicare Discretionary Spending – Government has choices on how to spend Defense Education Environmental Protection Mandatory spending is money that Congress is required by existing law to spend on certain programs or to use for interest payments on the national debt. Discretionary spending is spending about which lawmakers are free to make choices.

34 Federal Spending, cont. Taxes are spent on programs intended to keep Americans safe and secure. Answer: Medicare and other retirement, Social Security, and Defense (Other is equal to Defense at 19%).

35 Entitlement Programs Most of the mandatory spending items are for entitlement programs, which fund social welfare programs. The federal government guarantees assistance for all people who quality for such programs. Entitlements are a largely unchanging part of government spending. Congress can only change the eligibility requirements or reduce benefits if there is a change in the law.

38 Other Mandatory Programs
Include the following: Food stamps and child nutrition programs Retirement benefits and insurance for federal workers Veterans’ pensions Unemployment insurance In recent years, there has been a debate over governmentally funded universal healthcare.

39 Discretionary Spending
Defense spending = about 50% of the government’s discretionary spending. The Department of Defense uses this money to pay salaries of enlisted men and women as well as its civilian employees. Buys weapons, missiles, ships, tanks, airplanes, and equipment. Checkpoint Answer: About half

Download ppt "Objectives Identify the sources of the government’s authority to tax." 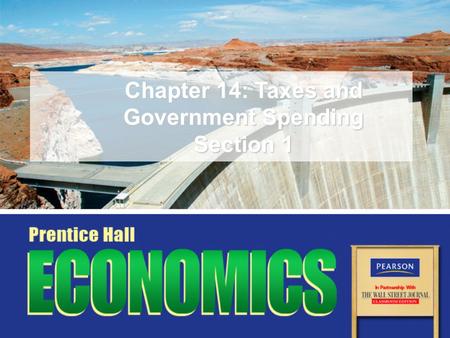 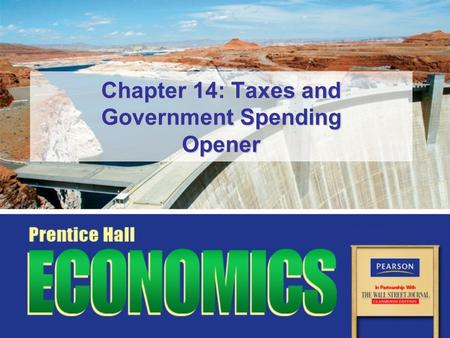