5   Write one sentence that incorporates the topic they have provided. (For example, relationships)  Then quote words from passage one that proves your point.  Make a connection between the quoted material and your thesis sentence.  Next quote material from passage 2. Make a connection between quoted material and your thesis sentence. (You may include several references to both works)  Finally, put your thesis into other words and state how both authors illustrated your point. Steps:

6  Relationships are an important social aspect of life because they act as a learning experience to gain knowledge and wisdom. Both Passage 1 and Passage 2 highlight the development of wisdom from a strongly fortified relationship. The relationship between Ezra and Mrs. Scarlatti explains a learning experience as Ezra is described as being “rescued from a careless existence” in learning how to cook with Mrs. Scarlatti “teaching him all she knew.” In befriending Mrs. Scarlatti, Ezra acquired wisdom in the profession of cooking. In befriending Ezra, Mrs. Scarlatti learned how to be truly cared for as Ezra’s care was a new hope compared to her “bad husband. Both Ezra and Mrs. Scarlatti prove that close relationships yield wisdom with the examples of cooking and family. Passage 2 uses the example of a father and son relationship to prove knowledge is gained in describing the duo as “knowing night by touch” and walking together securely with “flashlights dark.” Through spending much time together, the father-son pair has gained wisdom in relying on each other and protecting each other through the night without having to worry. The duo proves that close relationships yield wisdom as they were able to walk in the night by touch after their experiences together. Question 26 Controlling Idea Sample Response:

7  Choose a specific literary element (e.g., theme, characterization, structure, point of view, etc.) or literary technique (e.g., symbolism, irony, figurative language, etc.) used by one of the authors. Using specific details from either Passage I (the novel excerpt) or Passage II (the poem), in a well-developed paragraph, show how the author uses that element or technique to develop the passage. Question 27 Literary Analysis of ONE work

9  The author of passage 1 uses characterization in order to develop the passage. At the beginning of the passage, Ezra appears sweet and caring and subservient to Mrs. Scarlatti. He is eager to please her by bringing her soup and thankful that she gave him a career and a life. However, as the passage continues Ezra changes. Mrs. Scarlatti is sick in the hospital and Ezra is left to run the restaurant. He becomes strong, confident and independent. He defies Mrs. Scarlatti’s orders and wishes He adds gizzard soup to the menu even though she believes it’s “hearty and Scarlatti’s restaurant is very fine and formal.” Ezra continues to make changes against Mrs. Scarlatti’s will when he hires a waitress. This was “strictly against Mrs. Scarlatti’s policy” because waitresses “belong in a truck stop.” As Mrs. Scarlatti grows weak, he grows stronger. This changes the whole dynamic of their relationship. Sample Literary Analysis Response:

11  “The real hero is always a hero by mistake…” --Umberto Eco Travels in Hyperreality, 1986 Your Critical Lens:

13   Introduce and state the quote  Interpret the quote fully and in your own words—what does this quote mean?  Show agreement or disagreement  State thesis or stance and State two works of literature and the authors you will use to support your statement. Introduction

14  Introduction (actual) Umberto Eco once said, “The real hero is always a hero by mistake.” This means that sometimes people or characters are faced with tough choices that are unexpected. In these times of tough choices, heroes can arise. This quote is shown to be true through the books Of Mice and Men by John Steinbeck and The Crucible by Arthur Miller. In these two books, characters are forced into difficult situations where they ultimately make a “heroic” choice.

16  In Of Mice and Men by John Steinbeck, George is one character who is forced to make a very difficult decision. One literary element that helps support this is the theme of friendship. George and Lennie are very good friends but when Lennie unintentionally kills Curley’s wife all the men from the ranch are out for revenge. When George catches up with Lennie, his friendship is put to the test as he is faced with an impossible decision. George acts in Lennie’s best interest by making sure that Lennie’s last words are uplifting and optimistic. George decides that as Lennie’s friend, it is best for him to end Lennie’s life rather than leave him to face the mob. George proves to be Lennie’s “hero” by sparing him the unnecessary guilt and pain. Of Mice and Men gives an excellent example of how heroes can emerge from unexpected and even unpleasant situations. Body Paragraph 1 (sample)

17  Another great example of a “mistaken” hero is John Proctor from Arthur Miller’s The Crucible. In this play, John Proctor is a simple man who is characterized by Miller to be honest, trustworthy, and hardworking. These qualities prove him to be heroic in a time of madness and injustice. Proctor becomes a spokesperson for the average citizen in a Puritan world where accusations lead to prosecution and death. When John Proctor sacrifices his good name in order to help his wife escape lynching, he is seen as heroic. Other members of the community idolize his selflessness and realize that through this difficult time, Proctor rose to face the unfairness without fear. Arthur Miller created a true hero when he created the character of John Proctor. Although Proctor did not succeed with his goals, he still achieved greatness by simply trying to stand up for what he believed. Body Paragraph 2 (sample)

19  Heroes truly come from accidental situations where characters have been able to rise to an unfortunate occasion. In unpredictable times, both George from Of Mice and Men and John Proctor from The Crucible were able to do what was right despite a devastating circumstance. By doing the right thing even when it was difficult, both characters were able to become heroes in one way or another. This proves that true heroes can make difficult choices and rise up even when they don’t necessarily mean to. Conclusion (sample)

20   Review your work!  Use the guidelines provided to make sure your response completely answers the question.  Re-read for spelling or grammatical errors  Neatly cross-out and revise any mistakes Final Step 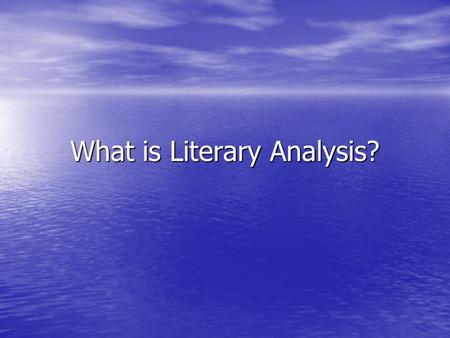 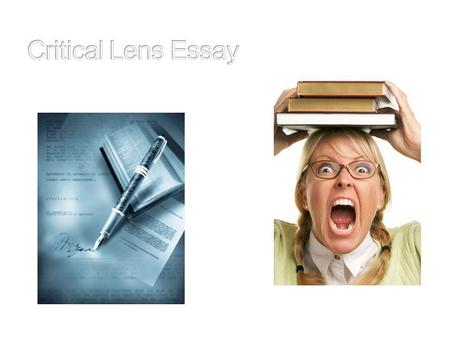 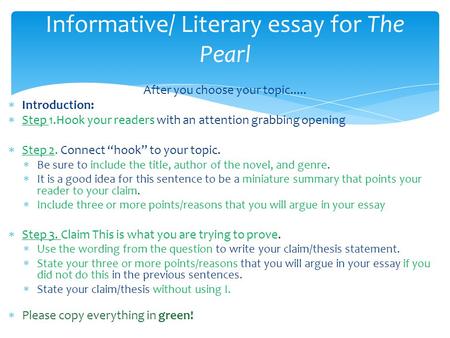 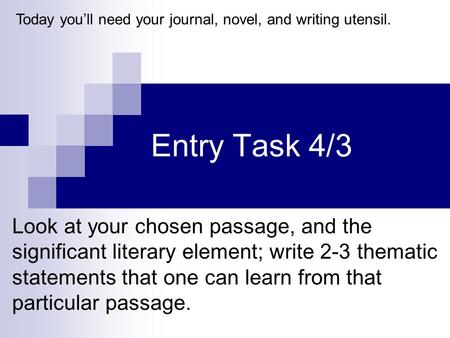 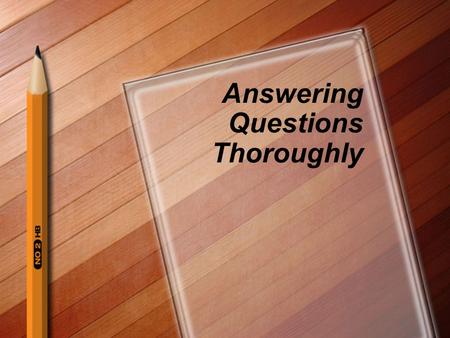 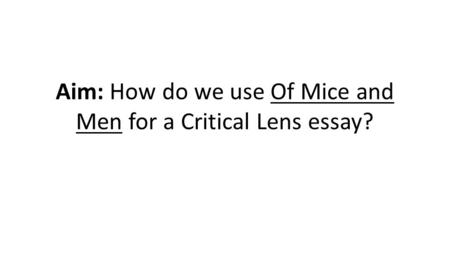 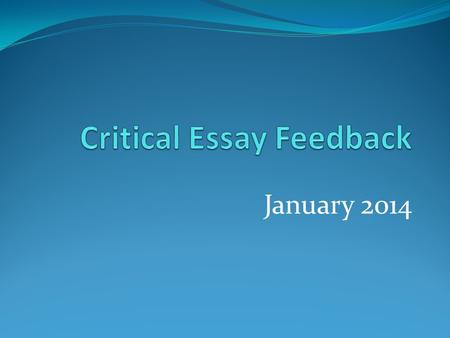 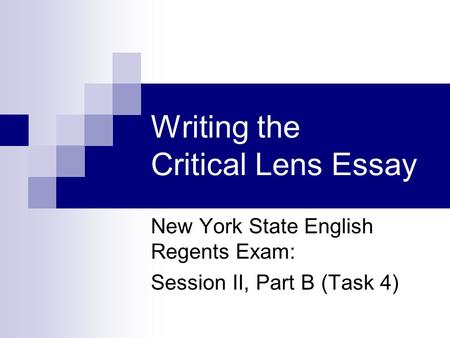 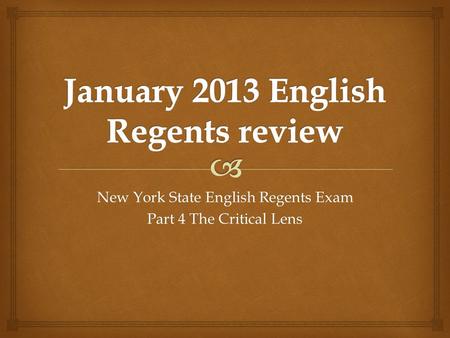 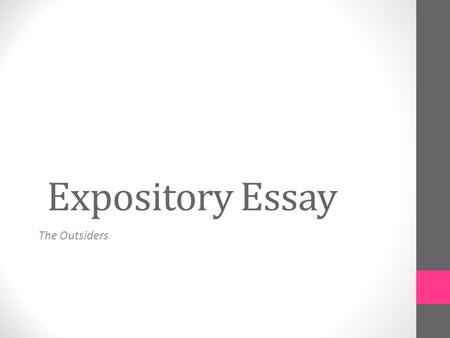 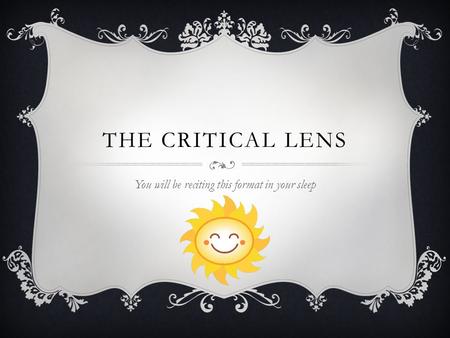 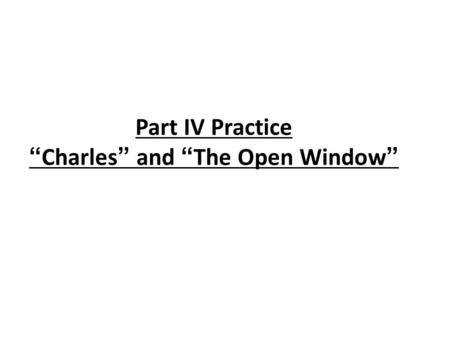 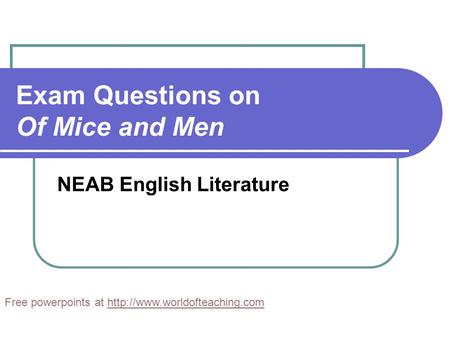 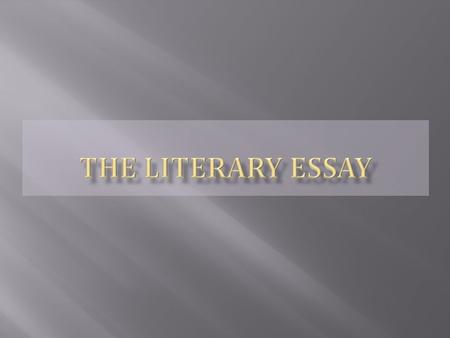 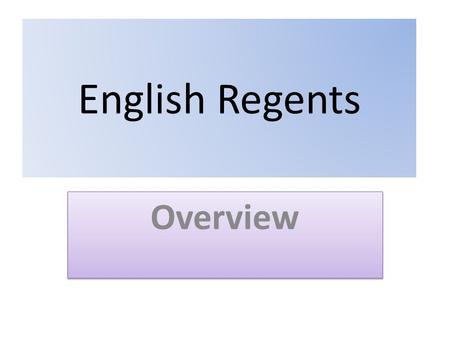 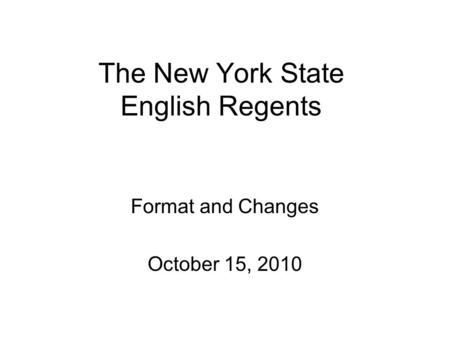 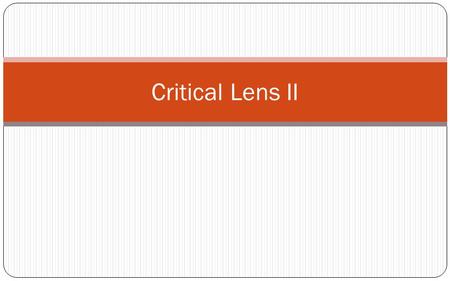 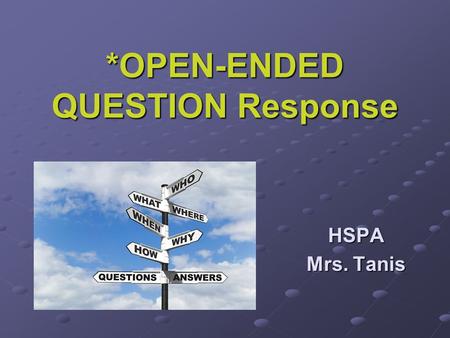