2 What is an Open-Ended Question?
Open ended questions are questions that lead to a further discussion. They are questions that do not have a simple answer like yes or no or a number. They are to be thoroughly explained in paragraph form with supportive evidence from the reading selection.

3 What is the point of learning how to write an open-ended question response?
It is going to be on the HSPA!!! It is the proper format for writing a response to a reading comprehension question (literature, college, etc…)

4 What does an Open-Ended Question look like?
Stem: Unable to see or hear, Helen Keller lived a solitary existence before Annie Sullivan came into her life. Requirements: - What was Helen like before she learned that everything had a name? - How did learning to communicate change her life? - What other obstacles do you think Helen had to face throughout her lifetime?

5 What should the FORMAT of an Open-Ended Question Response be?
The open-ended response should look like a mini essay. There should be a: Beginning (*Introduction) >> STEM Middle (*Body) >> BULLET QUESTIONS End (*Closing) >> CONCLUSION (add one!)

7 How does one write a proper RESPONSE for the open-ended question?
Follow the R A C E format?

8 What does the ‘R’ in Race stand for?
Re-state the stem in your own words (include author and “title” of reading selection) Stem: Unable to see or hear, Helen Keller lived a solitary existence before Annie Sullivan came into her life.

9 What does the ‘A’ in Race stand for?
Answer all the bullet questions (one paragraph for each bullet written in complete sentences) Example) - What was Helen like before she learned that everything had a name? - How did learning to communicate change her life?

10 What does the ‘C’ in Race stand for?
Cite information (use supporting details from the reading selection to support response; include “quotes” from reading)

11 What does the ‘E’ in Race stand for?
Edit and end response. Add a conclusion. Sum up ideas or draw a connection at the end (relating new to known) IMPORTANT: The writing prompt will not tell students to write a conclusion. Students have to take the initiative and write it themselves. Do not forget to ADD a CONCLUSION (2-3 sentences).

12 REVIEW of O.E. Question Response FORMAT
When answering an open-ended question, use the following format. R- Re-state the stem in your own words (include author and “title” of reading selection) A- Answer all the bullet questions (one paragraph for each bullet written in complete sentences) C- Cite information (use supporting details from the reading selection to support response; include “quotes” from reading) E- Edit and end response. Add a conclusion. Sum up ideas or draw a connection at the end (relating new to known)

13 MODEL Open-Ended Question Prompt
The Crucible- Acts II & III Stem: The relationship between John and Elizabeth has become mistrusted and strained as a result of John’s affair with Abigail. However, after Elizabeth is accused of being a witch (by Abigail), John proves himself to be a sincere man and a devoted husband. (Act II) Why is John hesitant about exposing Abigail in court as a fraud? How do you think this makes Elizabeth feel? (Act II) When Reverend Hale asks John to recite the Ten Commandments, which one does he forget? What is significant about this sin? (Act III) What information does John confess to the court about his marriage? Why does he confess such private information? What does his confession say about his character?

14 MODEL RESPONSE: Stem (re-state) Arthur Miller, in The Crucible, describes a distrustful marriage between two characters, John and Elizabeth Proctor. As a result of an act of adultery, John learns the value of his marriage and becomes a devoted husband. John is hesitant about exposing Abigail in court as a fraud because of the consequences. First, he fears that she will tell of their affair. If the act of lechery is revealed, John’s reputation will be tainted. Additionally, in Puritan Salem, adultery is against one of the Ten Commandments which can result in severe consequences. In effect, Elizabeth feels hurt and betrayed by her husband. In response to John not wanting to tell the truth about Abigail and the girls’ fraudulent behavior, Elizabeth states coldly, “You cannot keep it John… Good then, let you think on it.” This shows that Elizabeth is still angry and has not yet forgiven John for the affair. This marriage appears to be in jeopardy.

15 At this point in The Crucible, John and Elizabeth’s marriage is rocky because of his infidelity. This is clear when Reverend Hale asks John to recite the Ten Commandments, and ironically, he forgets the one he committed. He fails to name adultery as a sin. His wife even reminds him in an embarrassed voice saying, “Adultery, John.” This is significant because it shows that John wants to forget about what he has done. He feels ashamed of himself and wishes that he hadn’t committed that sin. Reverend Hale came to the Proctor’s home that night to learn what kind of Puritans John and Elizabeth really are. What he doesn’t learn is that John is a man of great character and honesty. He confessed his faults to his wife. Furthermore, he never judged his neighbors when they were accused of witchcraft. In all, John Proctor is truly a good Puritan and a man who is trying to be a reliable husband. John’s true character becomes evident in Act III. In court, John confesses to adultery and spoils his good name. He says, “I have known her sir. I have known her.” As one can see, he says this without trying to protect himself. He is only trying to prove that Abigail is a liar. John regrets what he did, but he knows that it is more important to expose Abigail as a fraud, saving his wife and friends, than to protect his reputation. He is a man who is willing to sacrifice himself for the good of others in his family and community. In summation, John Proctor made a terrible mistake that almost destroyed his marriage. On the other hand, everyone makes mistakes that affect the health of our relationships. For instance, persons often disappoint parents or friends, yet people can hopefully learn from whatever they have done and become better, more trustworthy individuals. 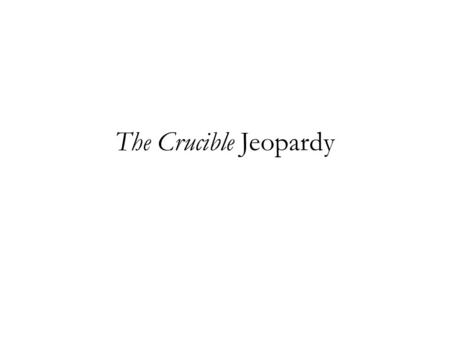 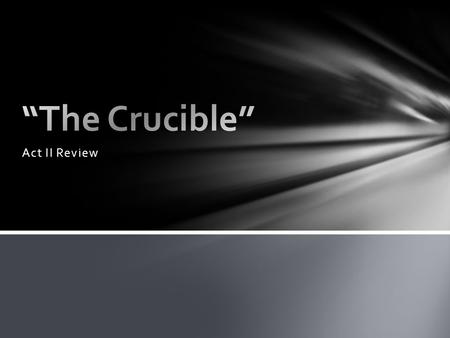 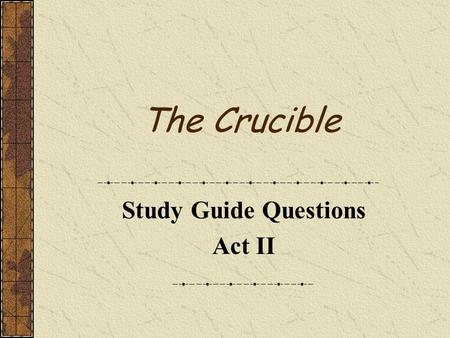 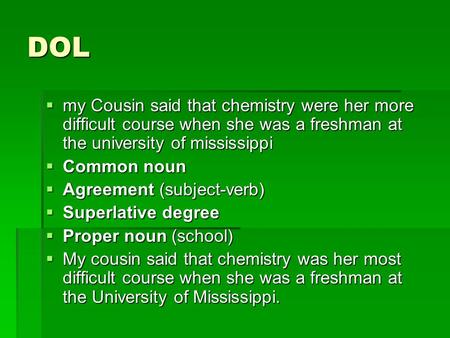 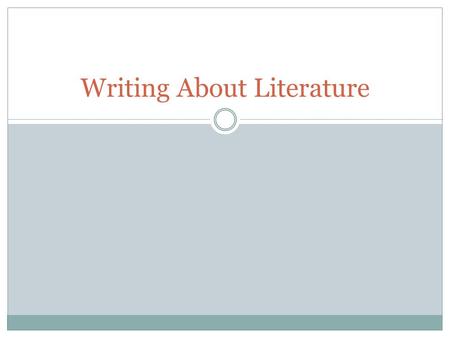 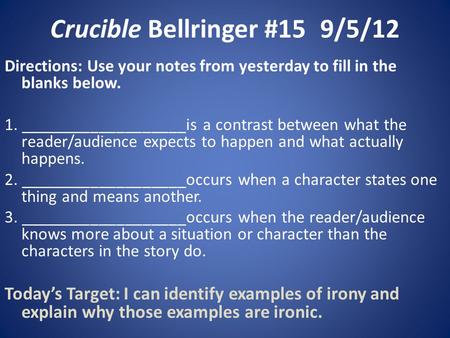 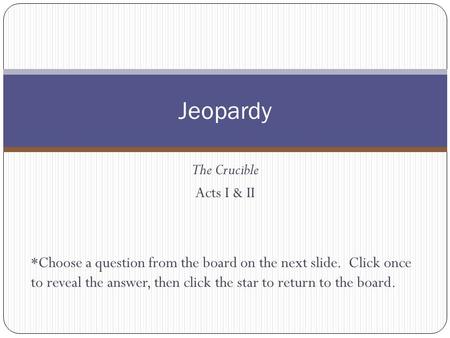 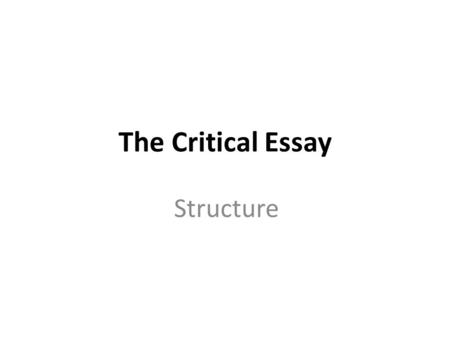 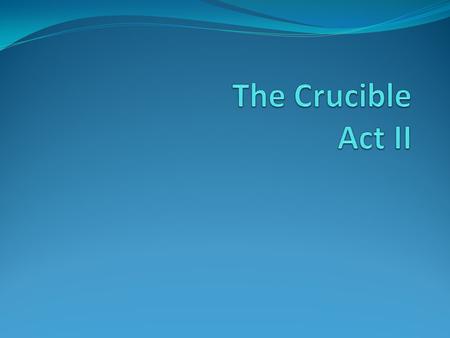 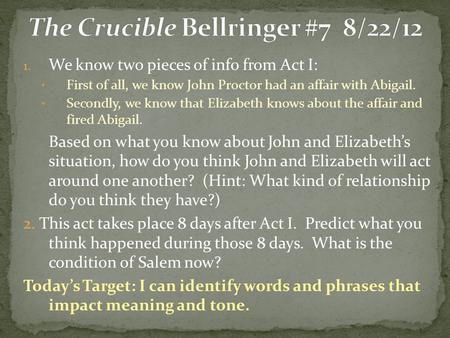 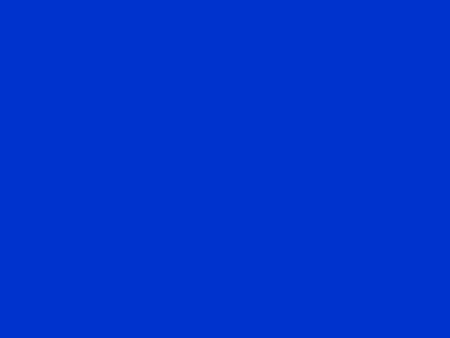 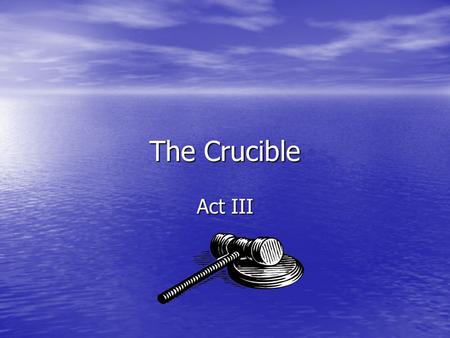 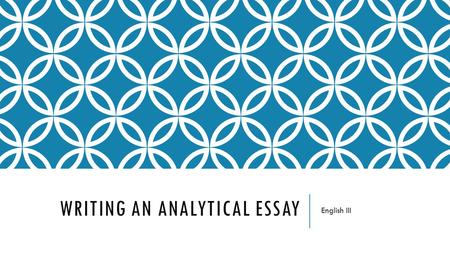 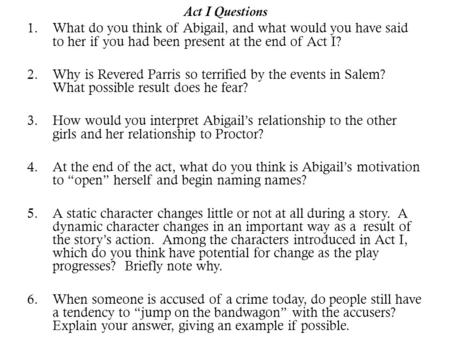 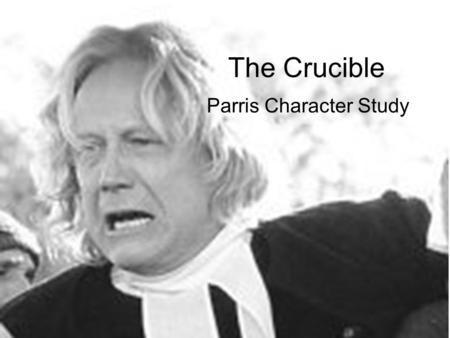 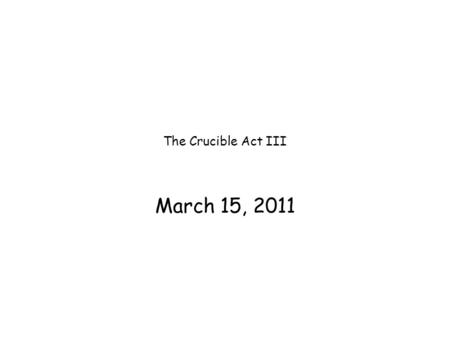 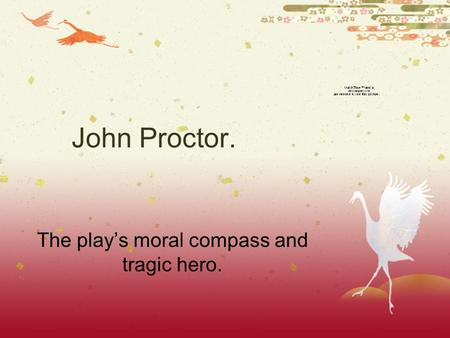 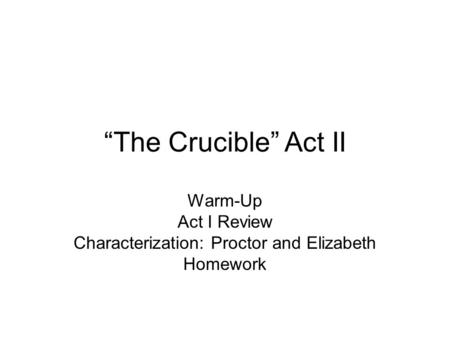 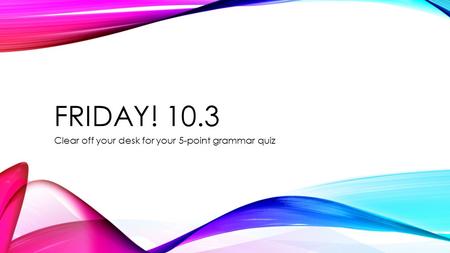 FRIDAY! 10.3 Clear off your desk for your 5-point grammar quiz. 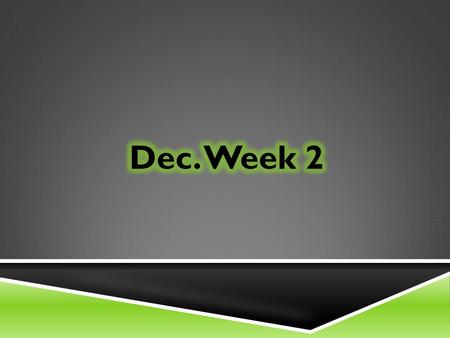 JOURNAL 5 – DEC. 8 CHOOSE ONE: ACT 1 Option A: Compare the play we read to the film we saw. What was the same or similar? What was different? Did any.