4 Aristotle’s bio cont.  When Aristotle turned 17, Proxenus sent him to Athens to pursue a higher education.  Athens was considered the academic center of the universe, at the time  In Athens, Aristotle enrolled in Plato’s Academy, Greek’s premier learning institution, and proved an exemplary scholar

5 Aristotle’s bio cont.  Aristotle maintained a relationship with Greek Philosopher Plato, himself a student of Socrates, and his academy for two decades.  After Plato died(347B.C.), Aristotle’s friend Hermias, king of Atarneus and Assos in Mysia, invited Aristotle court.  During his three-year stay in Mysia, Aristotle met and married his first wife, Pythias, Hermia’s niece  The couple had a daughter, Pythias, named after her mother

6 Aristotle’s Bio cont.  In 338 B.C., Aristotle went home to Macedonia to start tutoring King Phillip II’s son, the then 13-year-old Alexander the Great  In 335 B.C., With Alexander’s permission, Aristotle started his own school in Athens, called the Lyceum.  On and off, Aristotle spent most of the remainder of his life working as a teacher, researcher and writer at the Lyceum in Athens

7 Aristotle’s bio cont.  Aristotle was known to walk around the school grounds while teaching, his students, forced to follow him, were nicknamed the “Peripatetics,” meaning “people who travel about.”  Lyceum members researched subjects ranging from science and math to philosophy and politics, and nearly everything in between.

8 Aristotle’s bio cont.  In the same year that Aristotle opened the Lyceum, his wife Pythias died.  Soon after, Aristotle embarked on a romance with a woman named Herpyllis, who hailed from his hometown of Stagira  According to some historians, Herpyllis may have been his slave, granted to him by the Macedonia court  Historians presume that he eventually freed and married her

9 Aristotle’s bio cont.  Although Aristotle was not technically a scientist by today’s definitions, science was among the subjects that he researched at length during his time at the Lyceum.  Aristotle believed that knowledge could be obtained through interacting with physical objects  He concluded that objects were made up of a potential that circumstances then manipulated to determine the object’s outcome  He also recognized that human interpretation and personal associations played a role in our understanding of those objects

10 Aristotle’s bio cont.  One of the main focuses of Aristotle’s philosophy was his systematic concept of logic  Aristotle’s objective was to come up with a universal process of reasoning that would allow man to learn every conceivable thing about reality  The initial process involved describing objects based on their characteristics, states of being and actions  In his philosophical treatises, Aristotle also discussed how man might next obtain information about objects through deduction and inference  To Aristotle, a deduction was a reasonable argument in which “when certain things are laid down, something else follows out of necessity in virtue of their being so.”  His theory of deduction is the basis of what philosophers now call a syllogism, a logical argument where the conclusion is inferred from two or more other premises of a certain form

11 Aristotle’s bio cont.  Aristotle wrote an estimated 200 works, most in the form of notes and manuscript drafts  They consist of dialogues, records of scientific observations and systematic works  His student Theophrastus reportedly looked after Aristotle’s writings and later passed them to his own student Neleus, who stored them in a vault to protect them from moisture until they were taken to Rome and used by scholars there  Of Aristotle’s estimated 200 works, only 31 are still in circulation  Most date to Aristotle’s time at the Lyceum

12 Aristotle’s bio cont.  When Aristotle’s former student Alexander the Great died suddenly in 323 B.C., the pro-Macedonian government was overthrown, and in light of anti-Macedonia sentiment, Aristotle was charge with impiety  To avoid being prosecuted, he left Athens and fled to Chalcis on the island of Euboea, where he would remain until his death(322 B.C.) 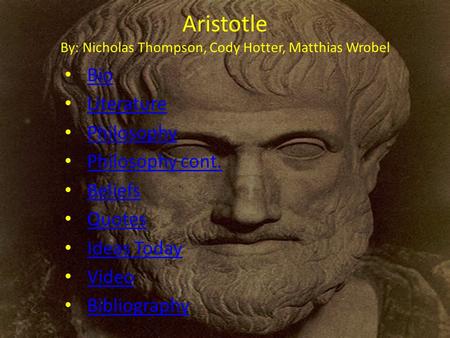 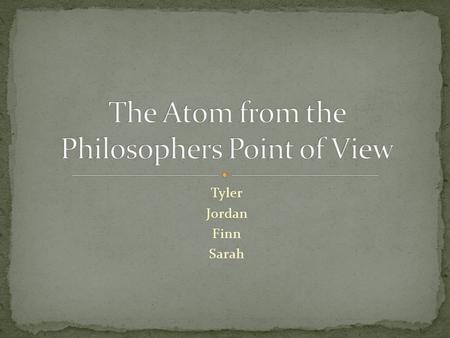 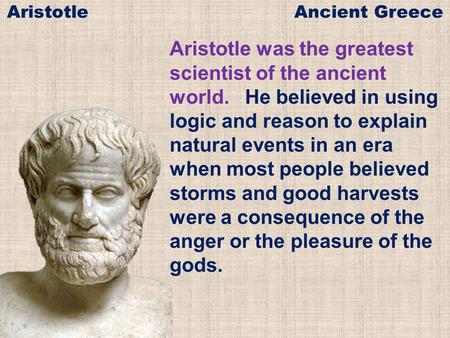 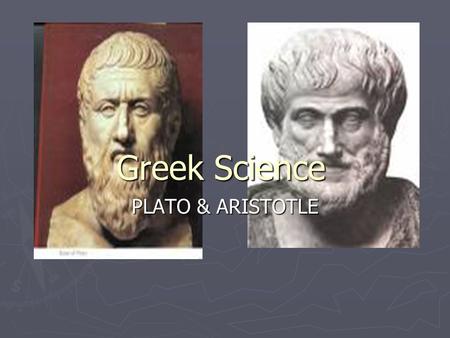 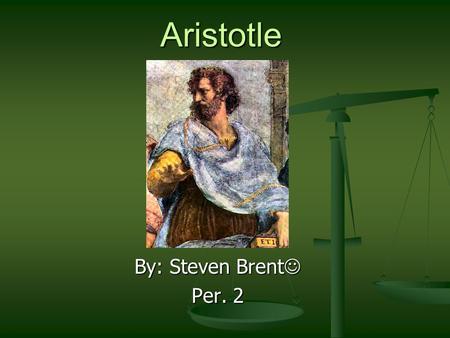 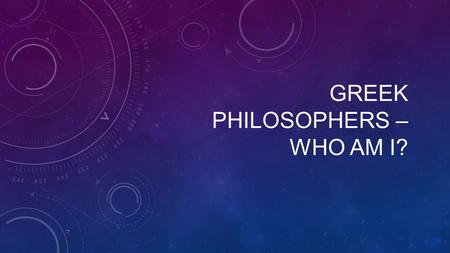 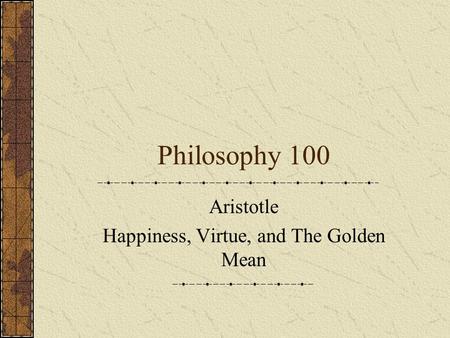 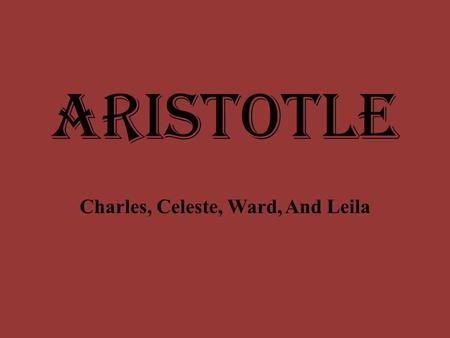 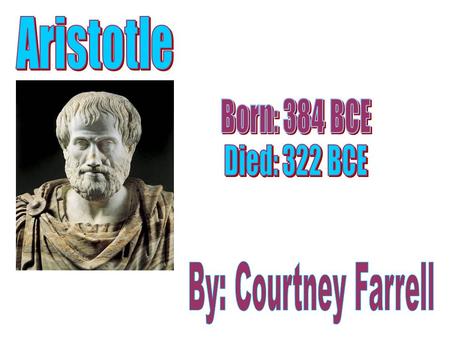 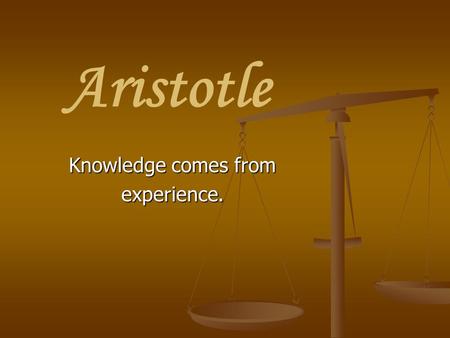 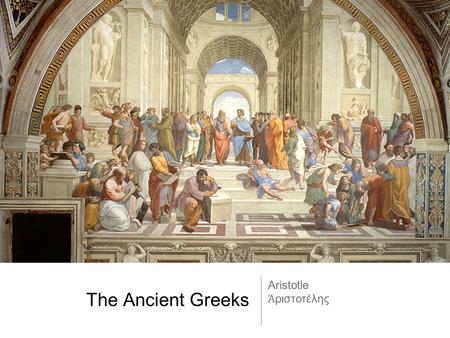 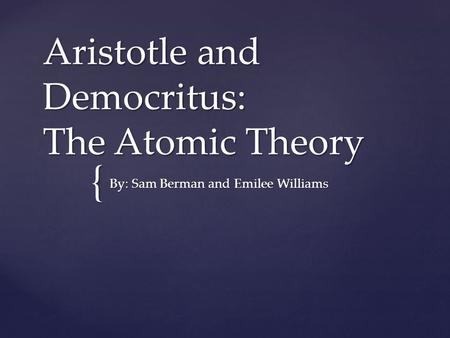 { Aristotle and Democritus: The Atomic Theory By: Sam Berman and Emilee Williams. 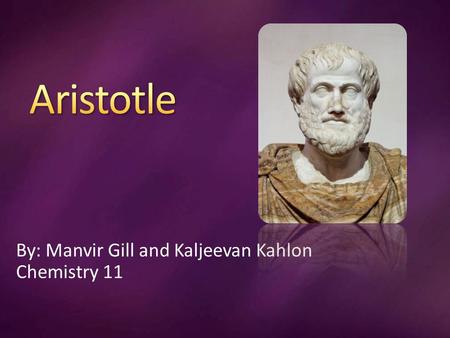 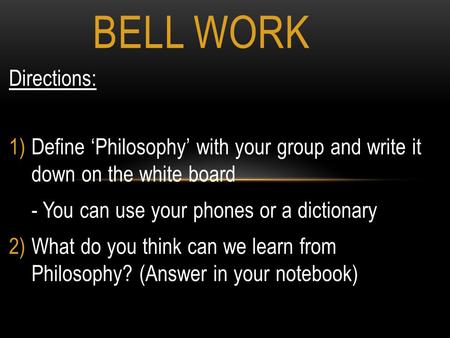 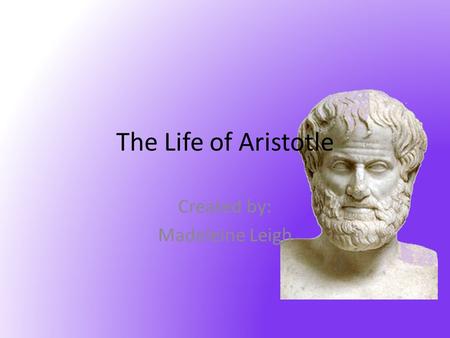