1 Gene and Chromosomal Mutations
Topic 4.1 and 4.2

2 A Eukaryotic Chromosome is made up of DNA and Protein

3 Gene: A gene is the stretch of DNA that codes for One protein. A gene is a heritable factor that controls a specific characteristic. There are several types of Genes: Genes that make proteins Structural genes, Regulator genes, genes that code for tRNA and rRNA.

4 As a Human you have 46 Chromosomes in 23 pairs.
One of each pair came from one parent and the other came from the other. Each pair carries the same sets of genes in the same positions. They are homologous. This is a picture of a flower chromosome!

5 Allele An allele is one specific form of a gene, differing from other alleles by one or a few bases only and occupying the same gene locus (position) on a chromosome as other alleles of the gene. Because you have 2 of each chromosome you can potentially have 2 alleles (versions) of each gene. E.g. Gene = Eye colour Allele = Brown eyes.

8 What will happen if I change a Nitrogen base on the DNA?
Eg. Brown Protein made Would become: Eg. Green Protein made …..a slightly different protein, OR a variant of the gene – Also called an Allele.

11 Sickle-cell Anemia This misshaping of the blood cells is due to GAG being mutated to GTG causing Glutamic acid to be replaced by valine! This causes a reduction in oxygen-carrying capacity of the blood; pale skin, fatigue and difficulty breathing.

12 Think……. What would happen to the protein produced if an early codon got changed to a “STOP” codon? If a person has 2 copies of almost all alleles, one of which has this early “stop” codon, (because they possess 2 copies of every chromosome) Will the protein that this allele is coding for still get made? Does this explain dominant and recessive genes?

13 Genome The genome is the whole of the genetic information of an organism. Look up the Human Genome Project. What can it tell us? How was it done? Who is J.Craig Ventor?

14 Karyotyping We can look at our chromosomes during Mitosis. If we add stain the proteins in the chromosomes take it up differently. We take a picture of them. We can then pair up homologues according to size and banding. This is used to look for chromosomal abnormalities in a fetus, (and to determine the gender of a person – Olympics committee!)

16 A Male Shows 23 pairs of chromosomes. Twenty two pairs are called autosomes, 1 pair is called the sex chromosomes ; XY in a male.

17 A Female Shows 23 pairs as in the male, but sex chromosomes are represented by XX.

19 Associated with 3 copies of chromosome number 21(trisomy of chromosome 21), rather than the 2 found normally. Down syndrome is characterized by differing degrees of mental retardation, a skin fold over the eye, typically short stature, and short hands with a deep crease in the palm. Down is also known as mongolism (mongoloid).

20 Three sex chromosomes are associated with Klinefelter rather than the expected 2 - XXY. These individuals are males with some development of breast tissue normally seen in females. Little body hair is present, and such person are typically tall, with or without evidence of mental retardation. 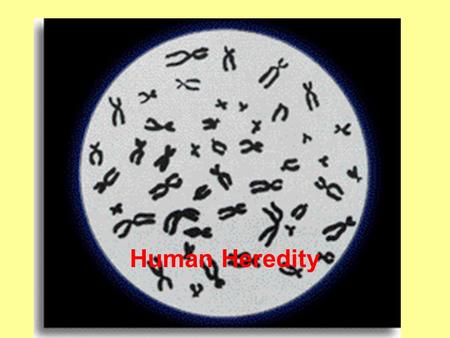 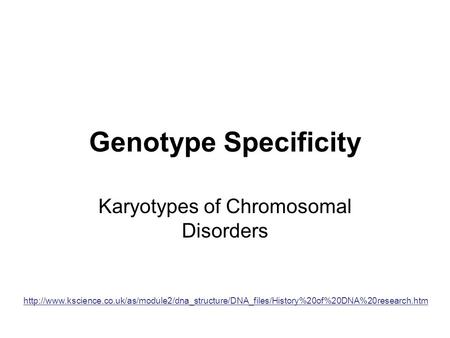 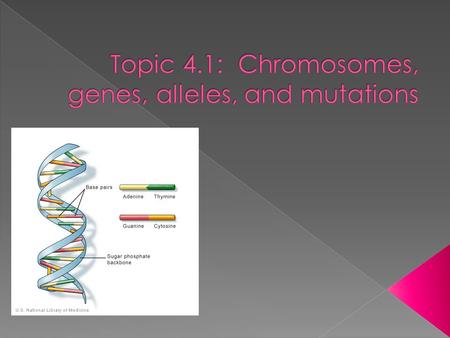 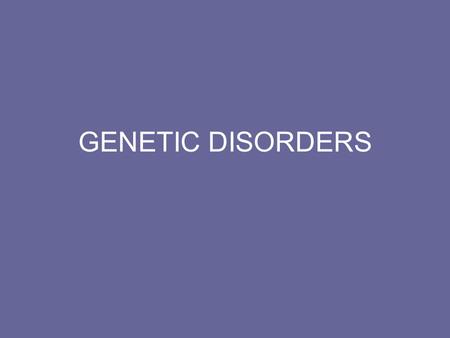 GENETIC DISORDERS. A genetic disorder is a disease that is caused by an abnormality in an individual's DNA. Abnormalities can range from a small mutation. 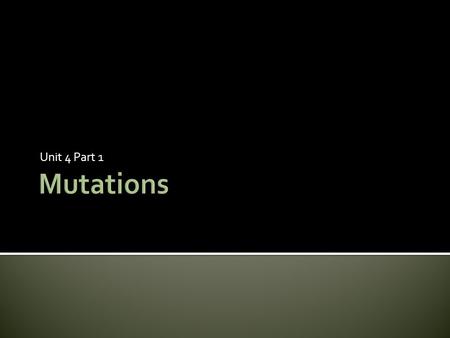 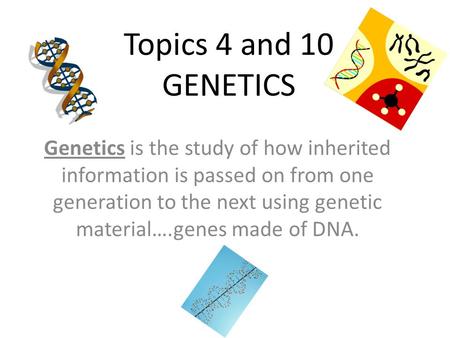 Topics 4 and 10 GENETICS Genetics is the study of how inherited information is passed on from one generation to the next using genetic material….genes. 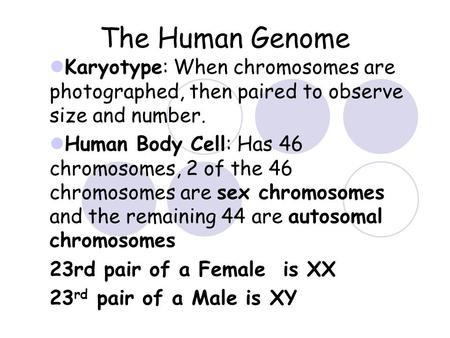 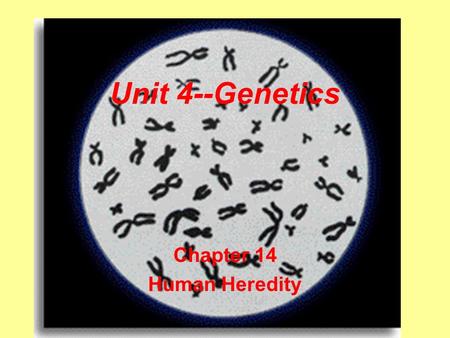 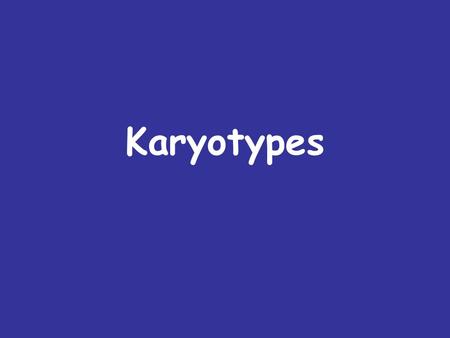 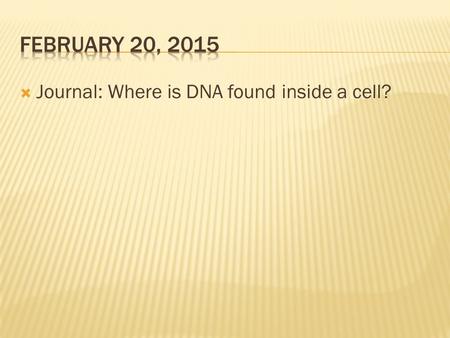  Journal: Where is DNA found inside a cell?.  Usually DNA inside the nucleus is wrapped around proteins to form an ‘X’ shape  These ‘X’ shaped coils. 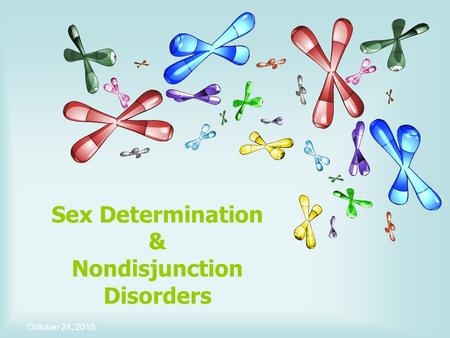 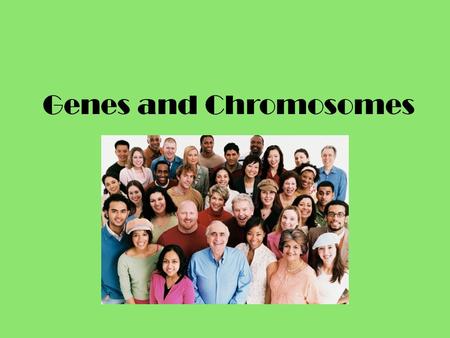 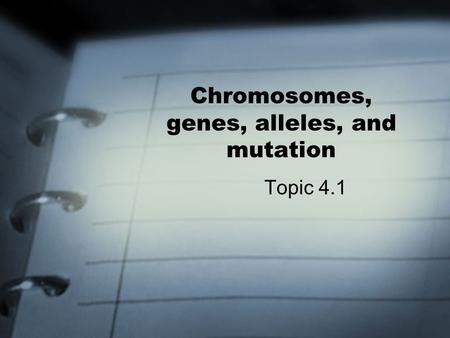