Presentation on theme: "The Urinary System Excretion: The removal of metabolic wastes from the"— Presentation transcript:

1 The Urinary System Excretion: The removal of metabolic wastes from the
body as a result of cellular activities

2 Examples of Excretion:
Skin – Excretes sweat (a solution of water, salt, and some urea) - Used to cool the body than secretion of wastes. - Increase in wastes during times of renal failure (kidney) Liver – Breaks down old red blood cells - Yellow pigment in urine is also formed from the breakdown of heme by the liver. It is then deposited in the blood and later removed from the kidneys. Lungs – Expiration removes carbon dioxide but it also results in the loss of water. Intestine – Certain salts, such as those of iron and calcium are excreted directly into the cavity of the intestine by the epithelial cells lining it and become part of feces. Kidneys – Excrete urine, which contains a combination of the end products of metabolism.

6 Position of the kidney in the body:
The two kidneys lie in the lower, dorsal part of the abdomen. They receive blood from the renal arteries to be cleaned. The wastes, to be excreted, called urine collects in the pelvic region of each kidney from where they are conducted by peristalsis down to the urinary bladder. When the urinary bladder becomes full, stretch receptor trigger urination, and the fluid is excreted.

7 Microscopic Anatomy of the Kidney:
The kidney is composed of over 1 million nephrons (or renal corpuscles) Bowman’s capsule and proximal convoluted tubule are located in the cortex. Loop of Henle in the medulla Distal convoluted tubule in the cortex Collecting ducts are located in the medulla and cortex Renal Artery – Bring blood to the kidneys to be “cleaned” (high urea content) Renal Veins – Returns blood that is cleaned (Low urea content, no glucose) Each nephron has its own blood supply. Including 2 capillary regions: 1. At the Glomerulus 2. Surrounding the rest of the nephron

10 Function of the Nephron
1. Pressure filtration: Blood enters the Glomerulus which is surrounded by the Bowman’s capsule. Here, occurs. Water, nutrients, and wastes enter the Bowman’s Capsule. Large organic molecules do not enter. The liquid that collects in the Bowman’s capsule is blood plasma minus blood proteins. Filtered Blood Components: Water Nitrogenous Wastes Nutrients Salt (ions) Non-Filtered Blood Components: Formed elements- (blood cells and platelets ) Proteins Blood pressure is very important. If blood pressure is too low, filtration will not occur. A hormone called rennin is released from a specialized tissue in the Glomerulus that causes the constriction of the Glomerulus thus the blood pressure is increased to an adequate level.

13 3. Tubular Excretion: Occurs at the distal convoluted tubule. Excess molecules in the blood, such as H+ ions, Histamine, Penicillin, and ammonia are secreted into the tubule from the blood, thereby helping to maintain homeostasis. Helps maintain blood pH 5. Concentrated Urine from the collecting tubule collect and goes to the Renal pelvis

14 4. Reabsorption of Water:
The body can not afford to lose all this water. It must be reabsorbed into the blood. The cells of the loop of Henle actively pump Na+ out of the tubule and K+ into the nephron. The result of this is that the negative ion (Cl-) and water follow the sodium by osmosis (to even out electrical and concentration gradients) Water is reabsorbed along the entire length of the nephron. There fore urine is concentrated. The blood in the capillaries are hypertonic to the fluids in the fluid spaces. The loop of Henle creates a high osmotic pressure in the medulla. The fluid going up the distal side of the loop of Henle has a greater concentration of wastes and little nutrient value.

15 5. Excretion: Concentrated Urine from the collecting tubule collect and goes to the Renal pelvis

16 Antidiuretic hormone (ADH) - Negative feedback
ADH – controls reabsorption of water. ADH increases the permeability of the distal convoluted tubule and collecting duct so that more water can be reabsorbed. Therefore a decreased amount of urine results, but an increase in urine concentration. Water and Urea=Urine. Urea is a waste product in the metabolism of proteins. With more water being reabsorbed, blood volume tends to be increased.

17 If too little water is taken in orally, the hypothalamus releases
a hormone into the nerve tract to the posterior pituitary gland. The posterior pituitary gland releases ADH and more water is absorbed by the kidneys to maintain blood volume. PH of blood is maintained by tubular excretion. If pH is too low, Hydrogen ions are secreted into the nephron. Alcohol has a negative effect on ADH. It sends a false message to the hypothalamus that there is too much water in the blood. ADH is not released in fact it is inhibited. Therefore water is not reabsorbed and is lost in the urine. That is why drinking alcohol, results in a lot of urination and dehydrated.

18 Aldosterone - Negative feedback
Hormones which regulate the level of sodium and potassium in the blood. If sodium is too low, aldosterone causes more sodium to be reabsorbed. If sodium concentration is high release of aldosterone is inhibited. Adrenal Cortex controls this hormone. The effect of this is the same as that of ADH – more water is reabsorbed due to osmosis in the loop of Henle

Download ppt "The Urinary System Excretion: The removal of metabolic wastes from the" 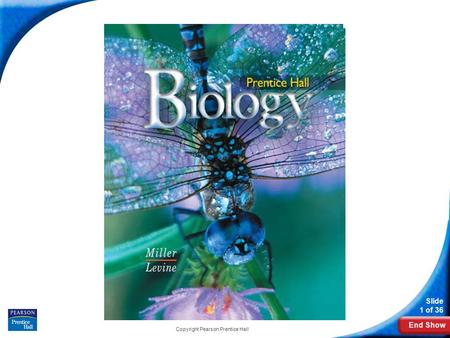 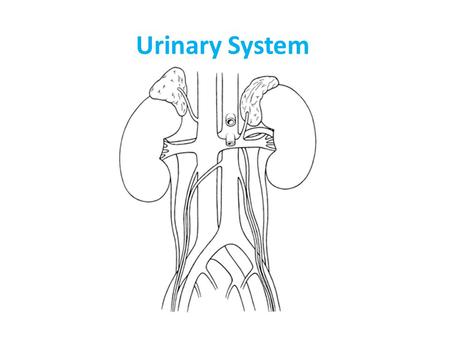 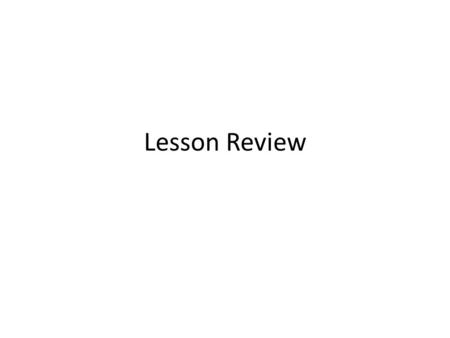 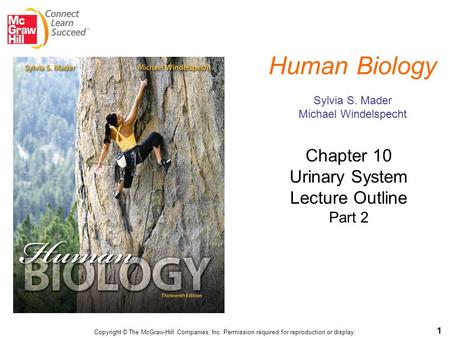 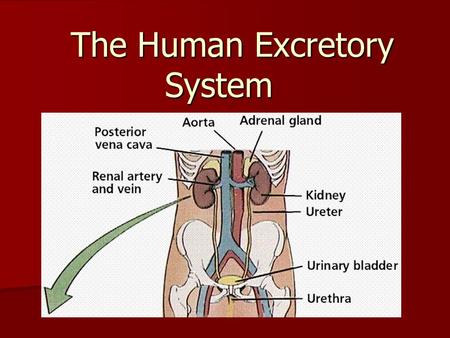 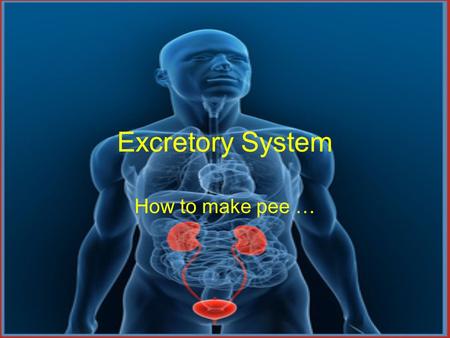 Excretory System How to make pee …. 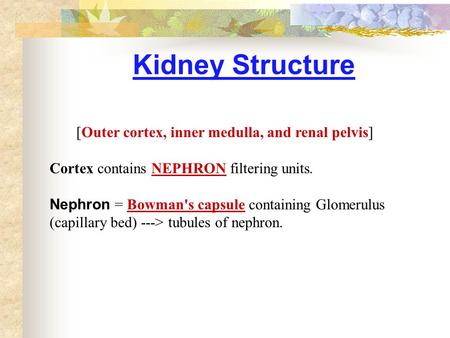 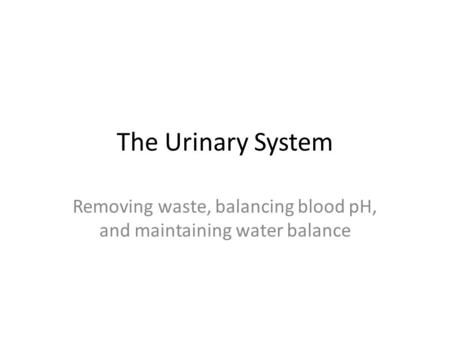 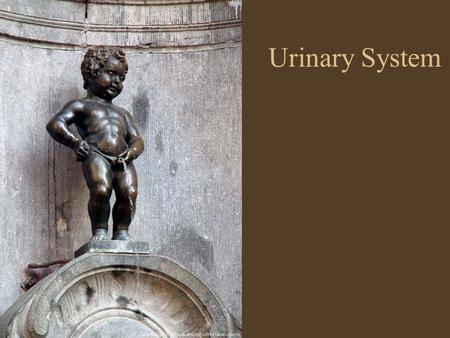 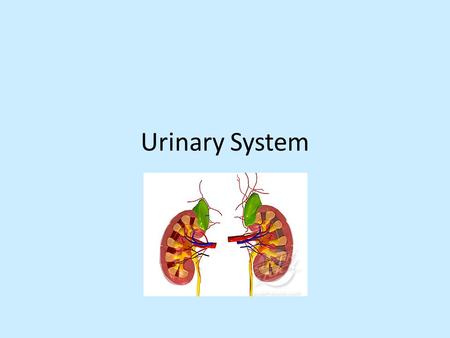 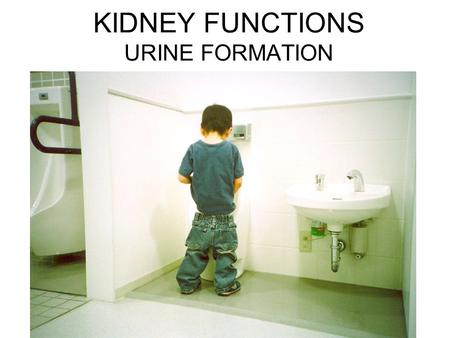 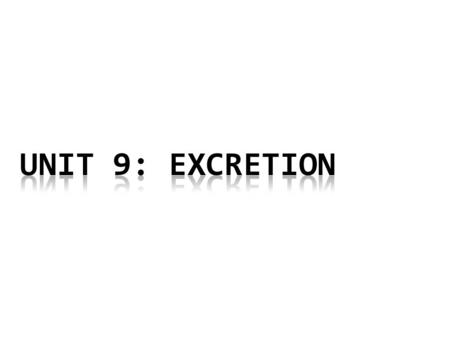 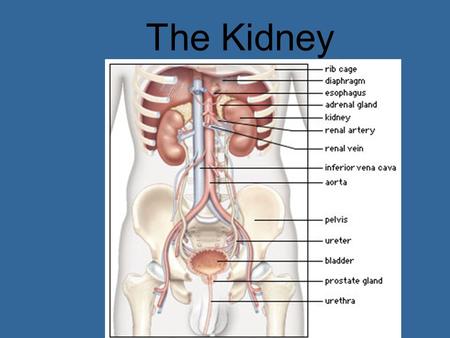 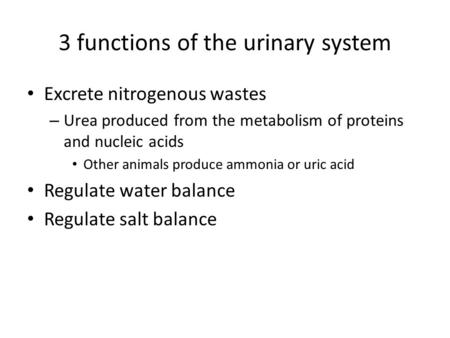 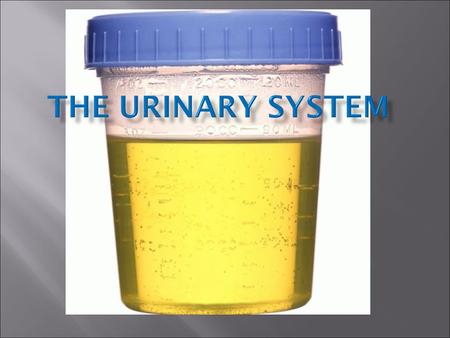 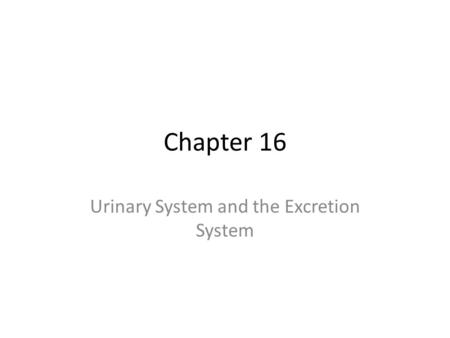 Urinary System and the Excretion System 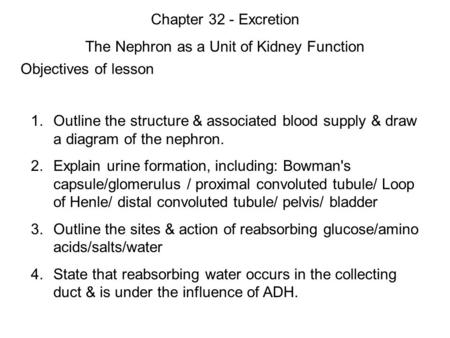 Objectives of lesson 1. Outline the structure & associated blood supply & draw a diagram of the nephron. 2. Explain urine formation, including: Bowman's.