2 BER vs. SNR in a flat fading channel In a flat fading channel (or narrowband system), the CIR (channel impulse response) reduces to a single impulse scaled by a time-varying complex coefficient. The received (equivalent lowpass) signal is of the form Proakis, 3rd Ed. 14-3 We assume that the phase changes “slowly” and can be perfectly tracked => important for coherent detection

6 BER vs. SNR (cont.) Approximation for large values of average SNR is obtained in the following way. First, we write Then, we use which leads to

9 Better performance through diversity Diversity  the receiver is provided with multiple copies of the transmitted signal. The multiple signal copies should experience uncorrelated fading in the channel. In this case the probability that all signal copies fade simultaneously is reduced dramatically with respect to the probability that a single copy experiences a fade. As a rough rule: BER Average SNR Diversity of L:th order

13 Selection diversity performance We assume: (a) uncorrelated fading in diversity branches (b) fading in i:th branch is Rayleigh distributed (c) => SNR is exponentially distributed: Probability that SNR in branch i is less than threshold y : CDF PDF

14 Selection diversity (cont.) Probability that SNR in every branch (i.e. all L branches) is less than threshold y : Note: this is true only if the fading in different branches is independent (and thus uncorrelated) and we can write

15 Selection diversity (cont.) Differentiating the cdf (cumulative distribution function) with respect to y gives the pdf which can be inserted into the expression for average bit error probability The mathematics is unfortunately quite tedious...

16 Selection diversity (cont.) … but as a general rule, for large it can be shown that regardless of modulation scheme (2-PSK, DPSK, 2-FSK). The largest diversity gain is obtained when moving from L = 1 to L = 2. The relative increase in diversity gain becomes smaller and smaller when L is further increased. This behaviour is typical for all diversity techniques.

19 MRC performance (cont.) The pdf of follows the chi-square distribution with 2L degrees of freedom Reduces to exponential pdf when L = 1 For 2-PSK, the average BER is Gamma functionFactorial

20 MRC performance (cont.) For large values of average SNR this expression can be approximated by which again is according to the general rule Proakis, 3rd Ed. 14-4-1

21 MRC performance (cont.) The second term in the BER expression does not increase dramatically with L:

23 Why is MRC optimum peformance? Let us investigate the performance of a signal combining method in general using arbitrary weighting coefficients. Signal magnitude and noise energy/bit at the output of the combining circuit: SNR after combining:

24 Applying the Schwarz inequality it can be easily shown that in case of equality we must have which in fact is the definition of MRC. Thus for MRC the following important rule applies (the rule also applies to SIR = Signal-to-Interference Ratio): Output SNR or SIR = sum of branch SNR or SIR values Why is MRC optimum peformance? (cont.) 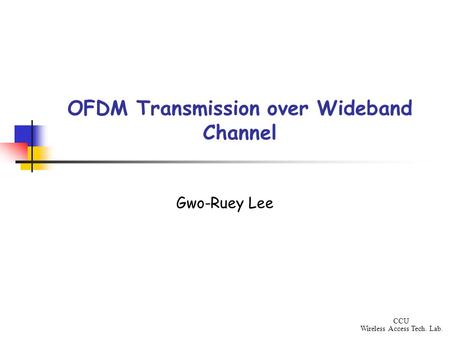 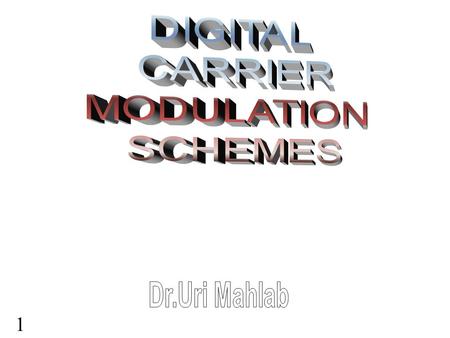 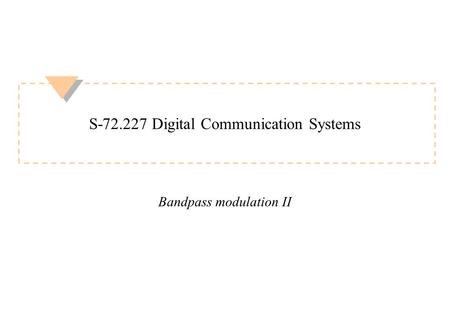 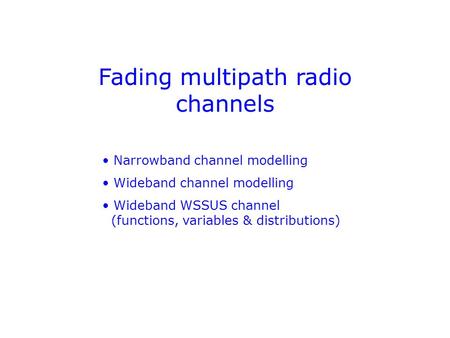 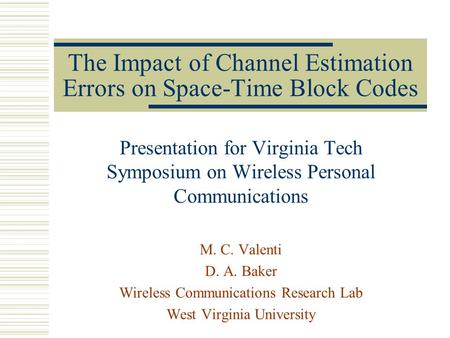 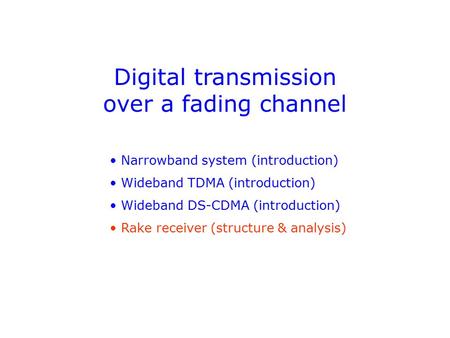 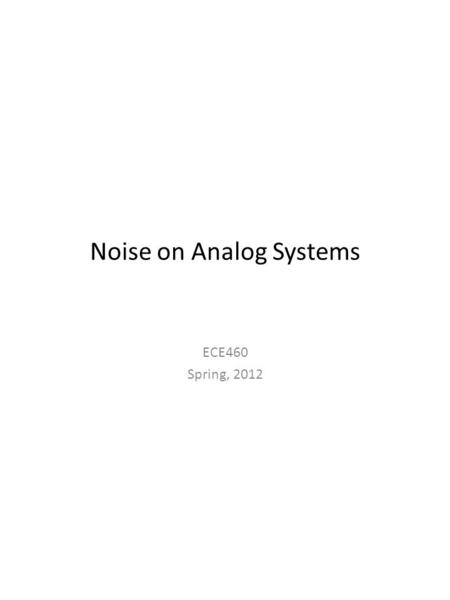 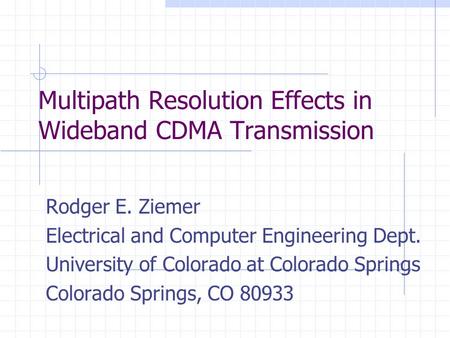 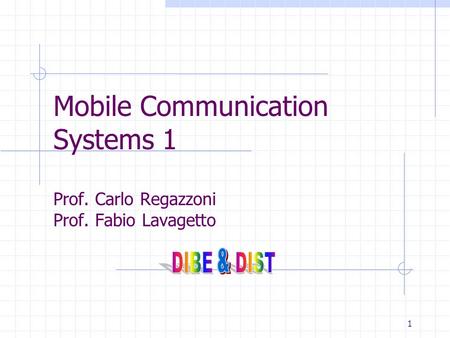 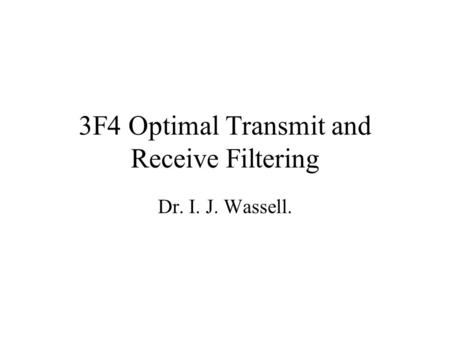 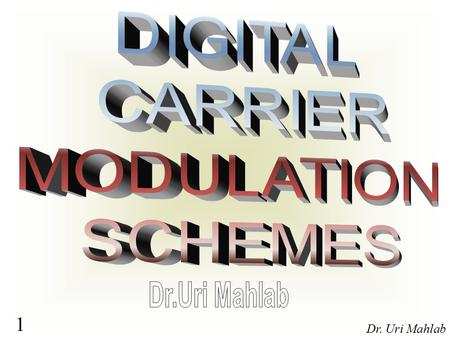 1 Dr. Uri Mahlab. INTRODUCTION In order to transmit digital information over * bandpass channels, we have to transfer the information to a carrier wave. 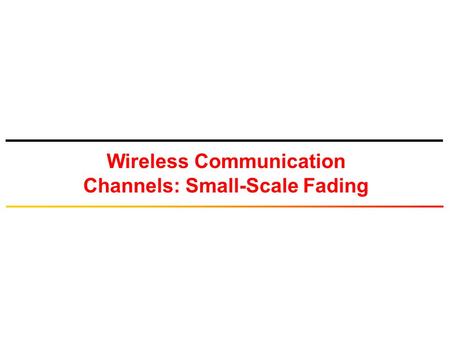 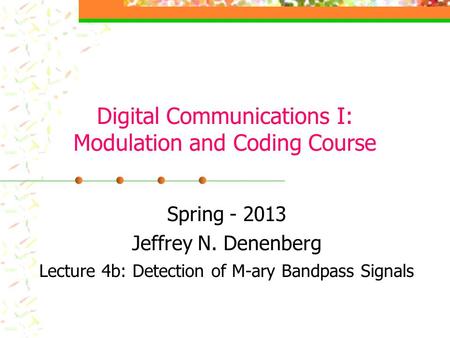 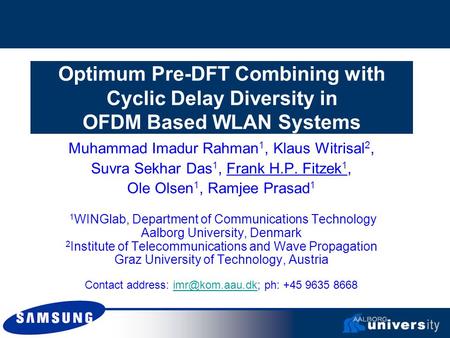 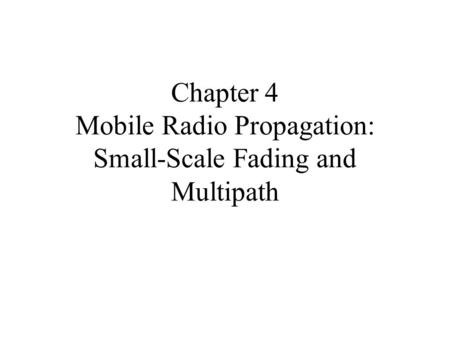 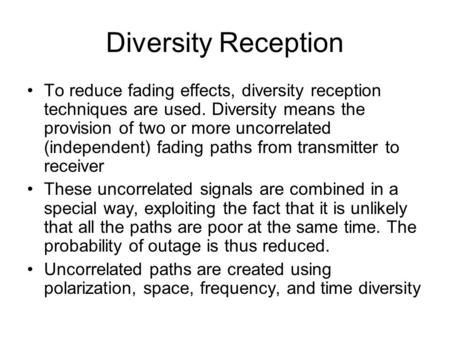 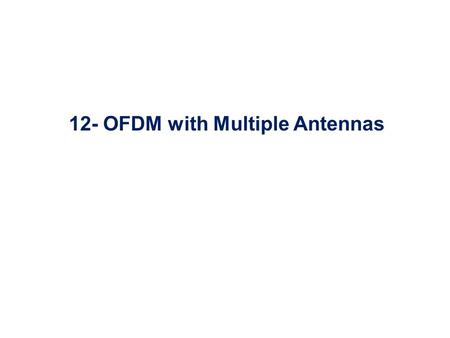 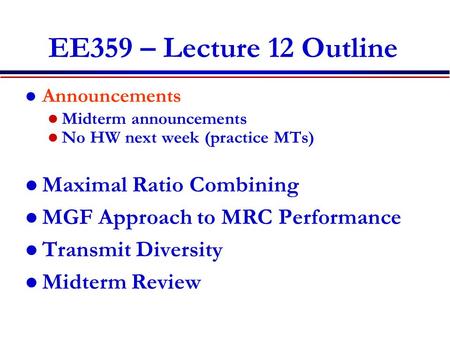 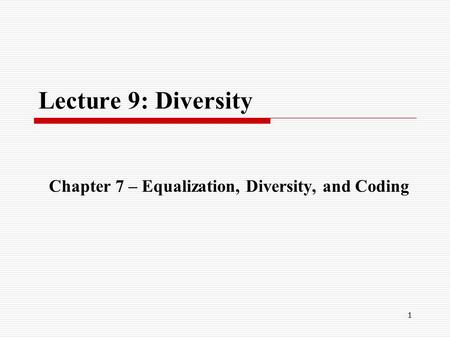 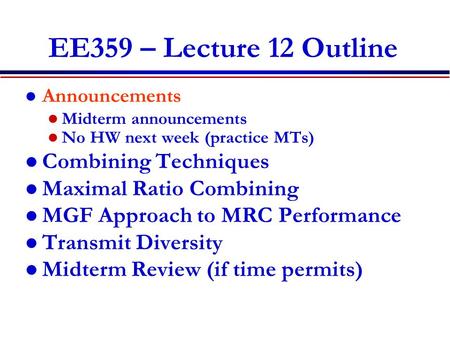