1 Section 2–3 Carbon Compounds
This section explains how the element carbon able to form millions of carbon, or organic, compounds. It describes the four groups of organic compounds found in living things.

2 The Chemistry of Carbon

4 What gives carbon the ability to form chains that are almost unlimited in length?
A carbon atom can bond to other carbon atoms.

5 Many of the molecules in living cells are so large that they are known as.
Macromolecules

6 What is the process called by which macromolecules are formed?
Polymerization

7 When monomers join together, what do they form?
Polymers

10 Circle the letter of each sentence that is true about carbohydrates.
Starches and sugars are examples of carbohydrates. Living things use them as their main source of energy. The monomers in sugar polymers are starch molecules. Plants and some animals use them for strength and rigidity.

12 Circle the letter of each monosaccharide.
galactose glucose fructose

13 11. What are polysaccharides?
They are large macromolecules formed from monosaccharides.

15 Chapter 2, The Chemistry of Life

16 Lipids What kinds of atoms are lipids mostly made of?
They are made mostly of carbon and hydrogen atoms.

17 What are three common categories of lipids?
Waxes fats Oil

18 15. Many lipids are formed when a glycerol molecule combines with compounds called .
Fatty Acids

19 16. Circle the letter of each way that fats are used in living things.
As parts of biological membranes b. To store energy c. To give plants rigidity d. As chemical messengers

22 19. The monomers that make up nucleic acids are known as .
Nucleotides

23 20. A nucleotide consists of what three parts?
It consists of a nitrogenous base, a phosphate group, and a 5-carbon sugar.

24 21. What is the function of nucleic acids in living things?
Nucleic acids store and transmit hereditary, or genetic, information.

26 Saturated Each carbon atom in a lipid’s fatty acid chain is joined to another carbon atom by a single bond.

27 Unsaturated There is at least one carbon-carbon double bond in a fatty acid.

29 Chapter 2, The Chemistry of Life

33 25. What are four roles that proteins play in living things?
Some control the rate of reactions and regulate cell processes. Some are used to form bones and muscles. Some transport substances into or out of cells. Some help to fight diseases. 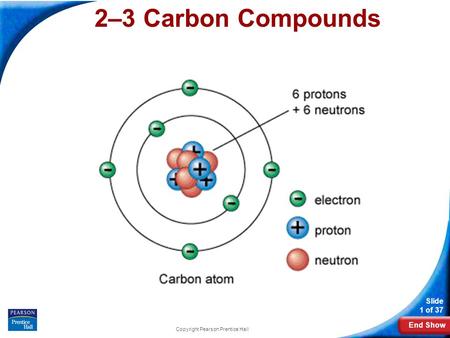 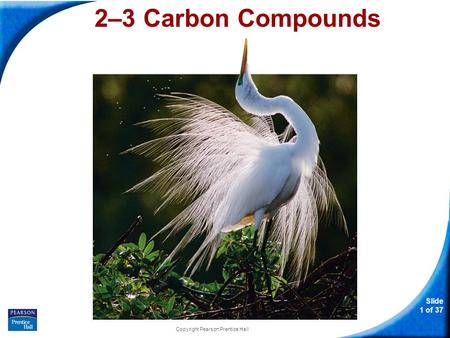