Grammar Workshop The Writing Studio Bate 2005. Pronoun and Antecedent Agreement A pronoun is a word that takes the place of a noun Both must be singular,

Presentation on theme: "Grammar Workshop The Writing Studio Bate 2005. Pronoun and Antecedent Agreement A pronoun is a word that takes the place of a noun Both must be singular,"— Presentation transcript:

2 Pronoun and Antecedent Agreement A pronoun is a word that takes the place of a noun Both must be singular, or both must be plural.

4 Avoiding sexist language Some people are bothered when the pronoun his is used to refer to both men and women. Three simple ways to avoid sexist language: Use "his/her" Change the subject, so you can use a plural possessive pronoun. Forget the rule in this case and just use the pronoun their with the indefinite pronoun everybody.

5 Who and whom Whether or not the "who" pronoun is singular or plural depends on the noun to which it refers. This can be a singular person or a group of people. If you get confused about whether to use who or whom, just reword the sentence. You can mentally substitute he or him in the sentence. Use who for he and whom for him.

9 Deliberate fragments Useful for mimicking everyday speech, a deliberate, or "stylistic fragment" as it is sometimes called, is a sentence fragment that is intended by the writer because it serves a purpose within a piece of writing. Be careful and use sparingly!

10 Subject-verb agreement The subject and the verb should both be singular, or they should both be plural. Situations to consider: A prepositional phrase does not influence a sentence's verb. Subjects connected by the word "and" usually will have a plural verb. When "each" or "every" comes before more than one noun, a singular verb is needed. Titles of books and articles need singular verbs. The word "news" and any names of diseases that end in "s" need singular verbs. When nouns are connected with "or," the verb agrees with the last noun.

Download ppt "Grammar Workshop The Writing Studio Bate 2005. Pronoun and Antecedent Agreement A pronoun is a word that takes the place of a noun Both must be singular," 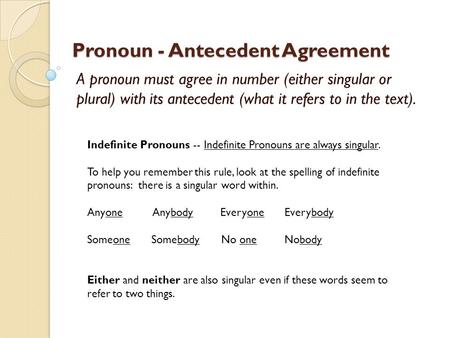 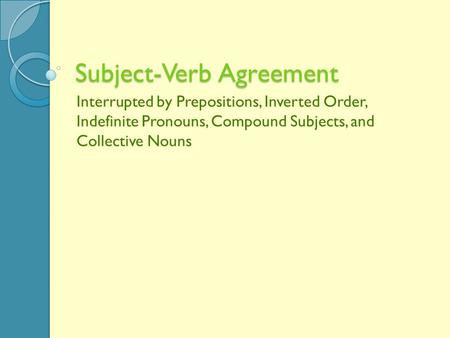