5 The IKE Header Fields Next Payload (1 octet) – indicates the type of payload that immediately follows the header Major Version (4 bits) – indicates the major version of the IKE protocol in use. Implementations based on version 2 must reject (or ignore) messages containing a version number greater than 2.

7 The IKE Header Fields Flags (1 octet) R(eserved) (bits 0-2)
I(nitiator) (bit 3) – set when the message is from the Original Initiator of the IKE-SA, and cleared otherwise. Used by the recipient to determine whether the message is a request or a response. V(ersion) (bit 4) – indicates that the transmitter is capable of speaking a higher major version number than the one indicated in the major version number field R(eserved) (bits 5-7)

10 Generic Payload header Fields
Next payload (1 octet) – indicates the type of the next payload in the message In the last payload in the message the field is zero Critical (1 bit) – indicates if the sender wants the receiver to skip (set to 0) or to reject (set to 1) this payload if he doesn’t understand the payload type code. If the recipient understands the code he should ignore this field

13 Proposal Structure Contains a Proposal # , a Suite-ID and the sending entity SPI(s) When the SA is accepted, the SA payload send back must contain a single proposal and its number must match the number in the accepted proposal

15 KE (Key Exchange) Payload
Alice sends her DH value in the IKE_SA_INIT, so she must guess the DH group that Bob will select from her list If she guesses wrong, Bob will reply with a Notify payload indicating the selected suite

16 ID (Identification) payload
Allows peers to assert an identity to one another Names the identity to be authenticated with the AUTH payload Assigned values for the ID Type field contain: ID_IPV4_ADDR, ID_IPV6_ADDR, ID_FQDN (a fully-qualified domain name string), ID_KEY_ID (may be used to pass vendor-specific information) and more

17 CERT (Certificate) Payload
Provides a means to transport certificates or other certificate-related information via IKE CERT payloads should be included in an exchange if certificates are available to the sender Certificate Encoding field indicates the type of certificate contained in the Certificate Data field.

18 CERTREQ (Certificate Request) Payload
Provides a means to request preferred certificates via IKE Can appear in the first, second, or third message of Phase 1 CERTREQ payloads should be included in an exchange whenever the peer may have multiple certificates, some of which might be trusted while others not

20 AUTH (Authentication) Payload
Contains data used for authentication purposes Auth Method field specifies the method of authentication used: Digital Signature (1) or Shared Key Message Integrity Code (2) Authentication Data field contains the results from applying the method to the IKE state If the specified authentication method is not supported or validation fails an error must be sent and the connection closed

22 N (Notify) Payload Used to transmit informational data: error conditions and state transitions May appear in a response message (usually specifying why a request was rejected), or in an Informational Exchange

23 N (Notify) Payload Fields
Protocol-Id (1 octet) – specifies the protocol about which this notification is being sent. For phase 2 will contain an IPsec protocol (AH or ESP), in other cases must be zero SPI Size (1 octet) Notify message type (2 octets) – the type of the notification message (next slide) SPI (variable length) Notification Data (variable length) – informational or error data transmitted in addition to the Notify Message Type

25 Notify Messages – Error Types
INVALID-SYNTAX Indicates that the message was invalid (type, length, or value out of range or the request was rejected for policy reasons) To avoid DOS attack using forged messages, this status may only be returned for and in a (valid) encrypted packet INVALID-MESSAGE-ID sent when received a MESSAGE-ID outside the supported window

26 Notify Messages – Error Types
NO-PROPOSAL-CHOSEN none of the proposed crypto suites was acceptable AUTHENTICATION-FAILED sent in response to an IKE_AUTH message when the authentication failed NO-ADDITIONAL-SAS indicates that Phase 2 SA request is unacceptable because the Responder is unwilling to accept any more CHILD-SAs on this IKE-SA.

28 D (Delete) Payload ESP and AH SAs always exist in pairs
To delete an SA, an Informational Exchange with one or more Delete Payloads is sent, listing the SPIs of the SAs to be deleted May be deletion of IKE-SA or of a CHILD-SA

29 Vendor ID Payload Contains a vendor defined constant
the constant is used by vendors to identify and recognize remote instances of their implementations allows a vendor to experiment with new features, while maintaining backwards compatibility

30 TS (Traffic Selector) Payload
Allows endpoints to communicate some of the information from their SPD to their peers 2 TS payloads appear in each of the messages in the exchange that creates the CHILD-SA pair Each traffic selector consists of an address range, a port range and a protocol ID 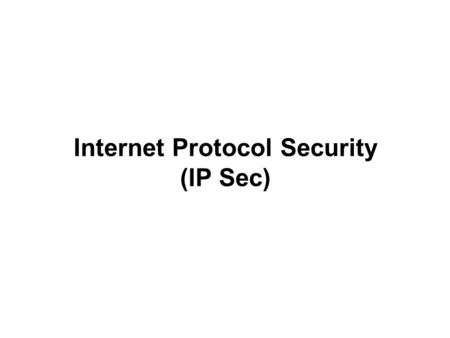 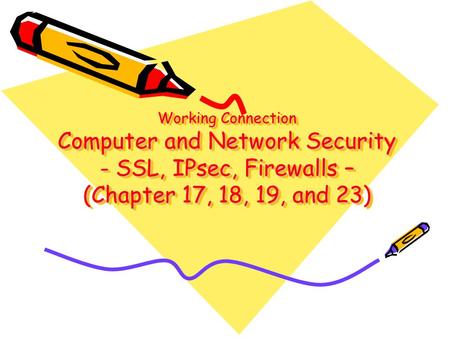 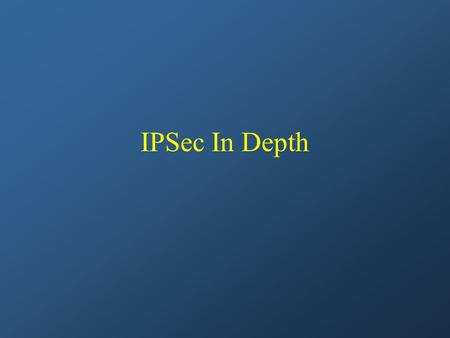 IPSec In Depth. Encapsulated Security Payload (ESP) Must encrypt and/or authenticate in each packet Encryption occurs before authentication Authentication. 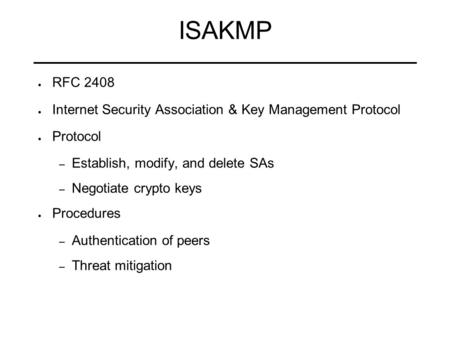 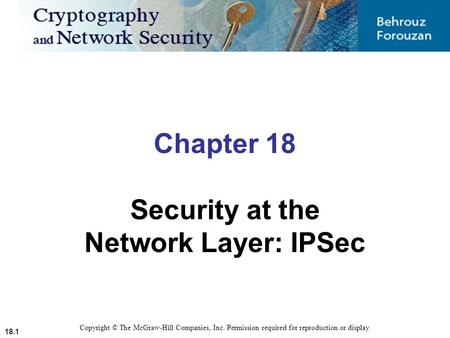 Security at the Network Layer: IPSec 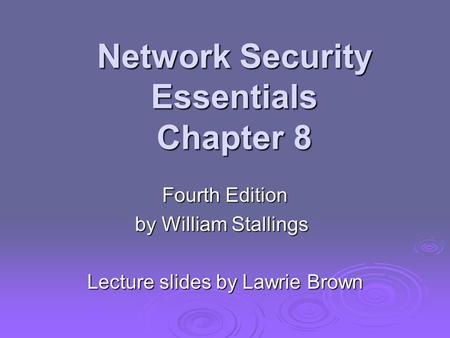 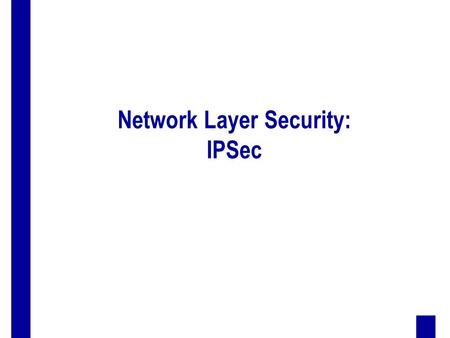 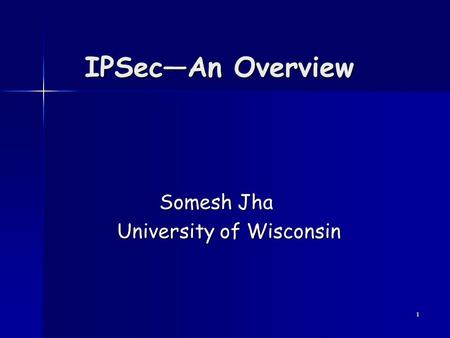 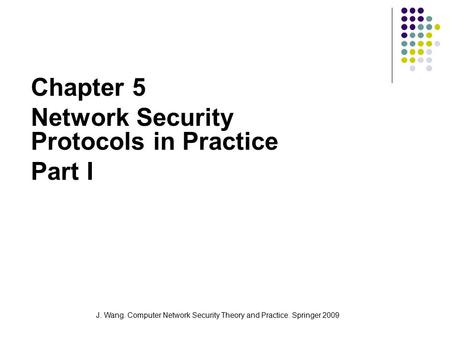 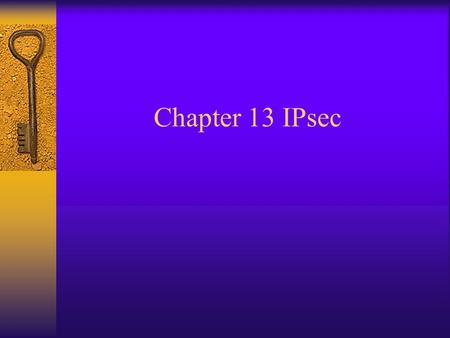 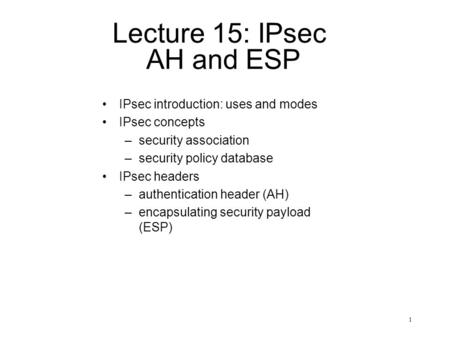 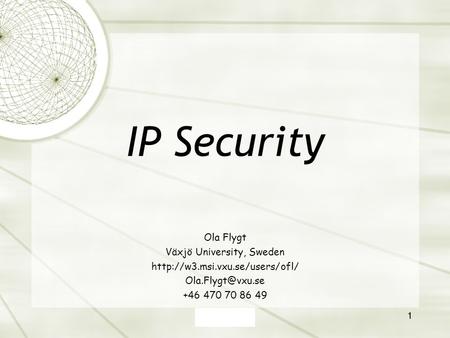 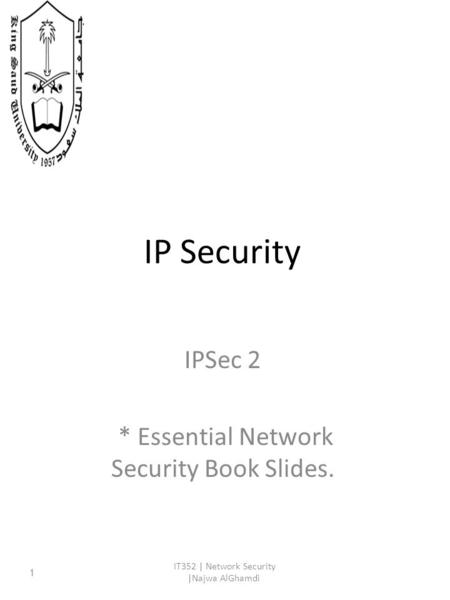 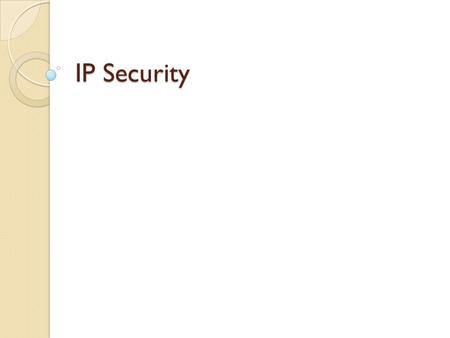 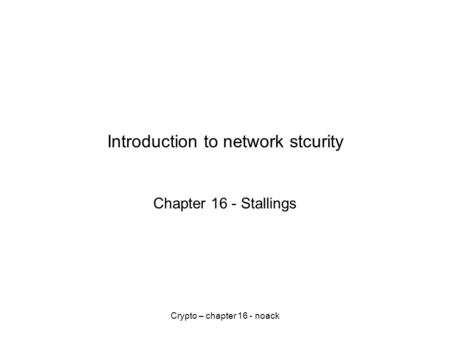 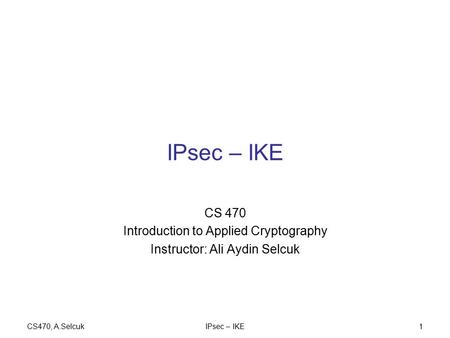 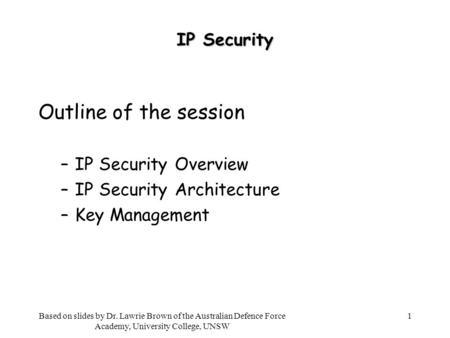 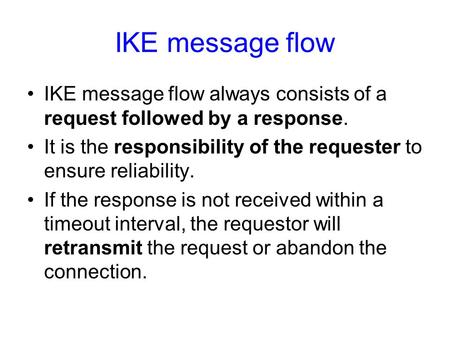 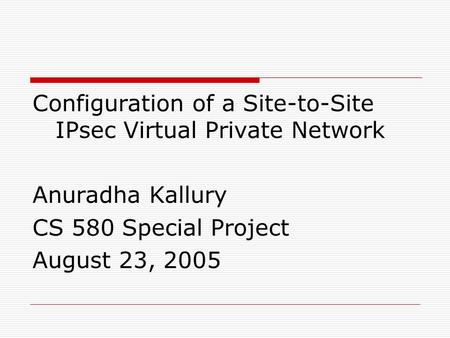 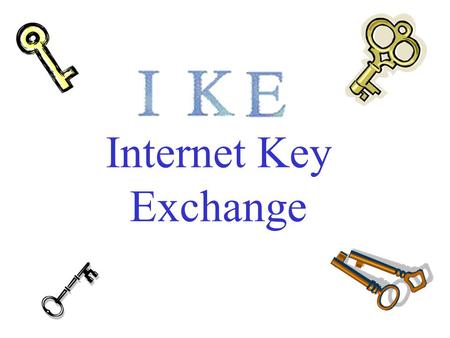