Water and its relation to Diffusion and Osmosis

Presentation on theme: "Water and its relation to Diffusion and Osmosis"— Presentation transcript:

1 Water and its relation to Diffusion and Osmosis

5 Diffusion of CO2 and O2 in the Lung

7 How Diffusion of Liquid in Liquid Works
Add a drop of food coloring in a container of water. The color will “diffuse” or disperse throughout the entire sample until the sample is a uniform color.

8 How Diffusion of Solid in Liquids Works

9 Diffusion of Gases A bottle of perfume opened in one corner of a room would slowly fill the room Molecules disperse from a concentrated source, the newly opened bottle, until they are evenly distributed throughout the room

11 How Diffusion of Solid in Liquid Works
The solute (solid) dissolving in the solvent is also an example of diffusion. The water “attacks” the solute which eventually dissolve. What are ways that this process in increased?

14 What are semi-permeable membranes?
Those membranes that allow the solvent (liquid), but not the solutes to pass from one side of the membrane to another EX: egg, cellophane, and cell membranes In these membranes the pores are large enough for water to pass through but too small for other compounds to pass

20 Hypertonic Solution The word "HYPER" means more, in this case there are more solute (salt) molecules outside the cell, which causes the water to be sucked in that direction.

21 If the concentration of the solute outside the cell is less than inside the cell it is called a hypotonic solution. Hemolysis will occur – additional water will travel into the cell causing it to swell and rupture.

23 Hypotonic Solution The word "HYPO" means less, in this case there are less solute (salt) molecules outside the cell, so water will move into the cell.

24 When the fluids have the same concentrations they are called isotonic
EX: when fluids are administered to a patient

26 Isotonic Solution If the concentration of solute (salt) is equal on both sides, the water will move back in forth but it won't have any result on the overall amount of water on either side. "ISO" means the same

30 Diffusion or Osmosis? Starch solution in the bag
Iodine solution surrounding the bag. What do you predict will happen?

Download ppt "Water and its relation to Diffusion and Osmosis" 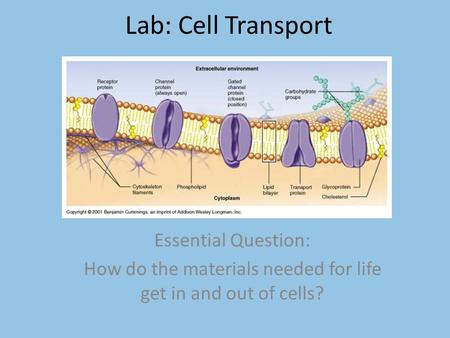 How do the materials needed for life get in and out of cells? 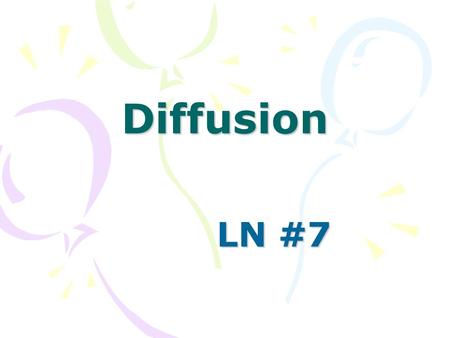 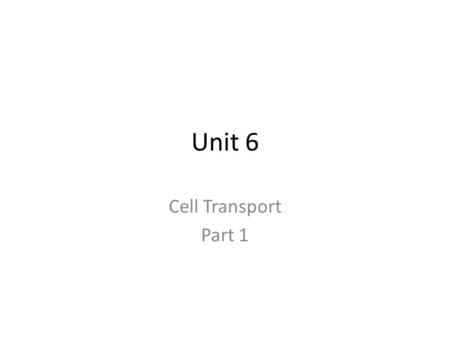 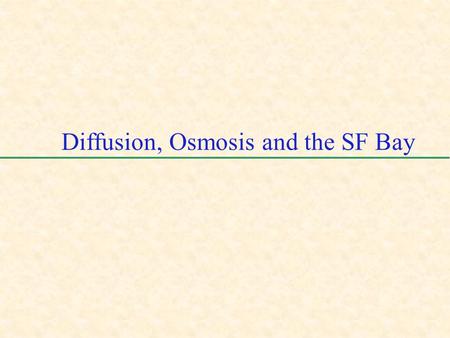 Diffusion, Osmosis and the SF Bay 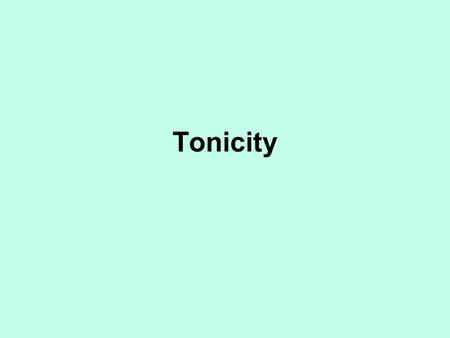 Tonicity. Passive transport are means by which molecules move because of their own Inherent energy. The movement is random. This random movement eventually. 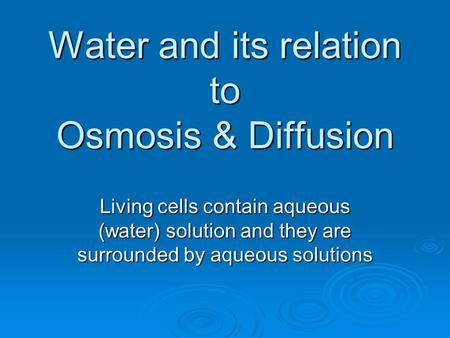 Water and its relation to Osmosis & Diffusion Living cells contain aqueous (water) solution and they are surrounded by aqueous solutions.

Why is this traffic across the membrane so important? 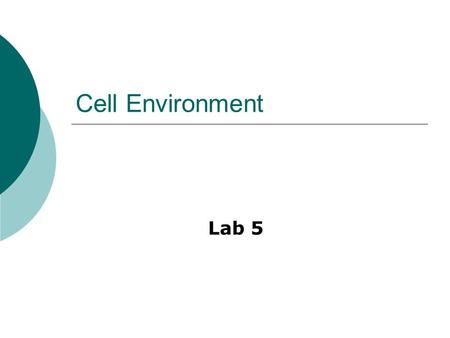 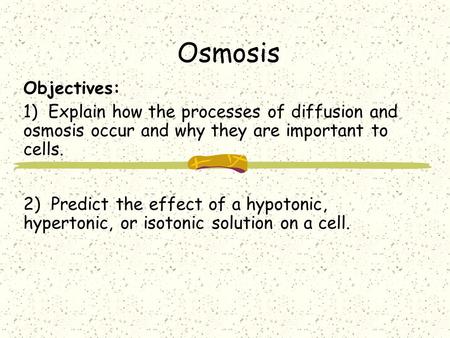 Objectives: 1) Explain how the processes of diffusion and osmosis occur and why they are important to cells. 2) Predict the effect of a hypotonic, hypertonic, 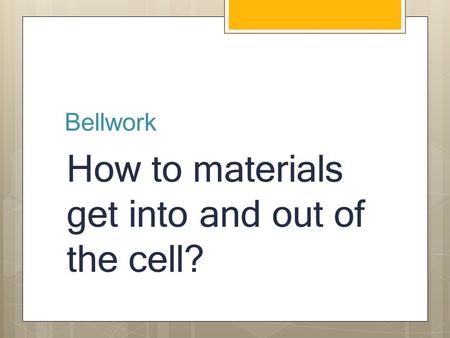 Bellwork How to materials get into and out of the cell? 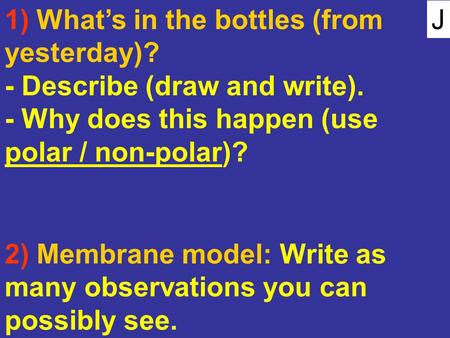 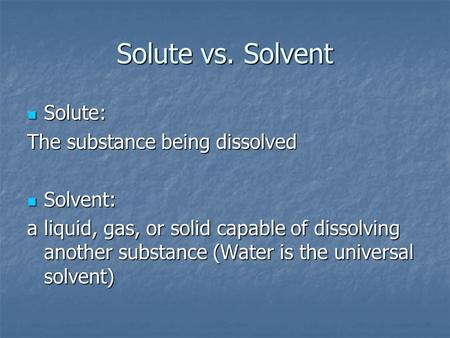 Solute vs. Solvent Solute: Solute: The substance being dissolved Solvent: Solvent: a liquid, gas, or solid capable of dissolving another substance (Water. 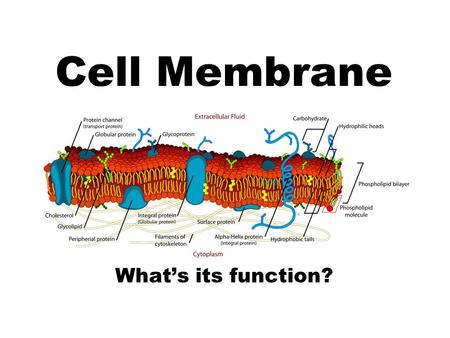 Cell Membrane What’s its function?. How does the membrane control what enters or leaves the cell? PASSIVE TRANSPORT (without energy input) -Diffusion. 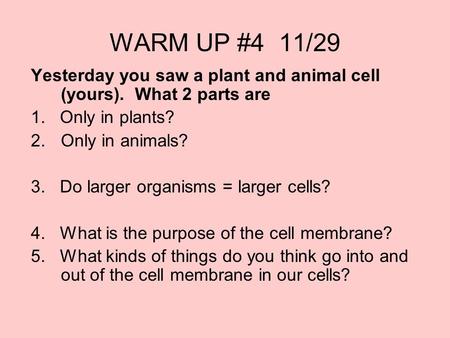 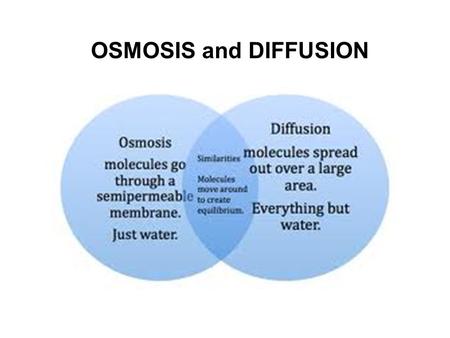 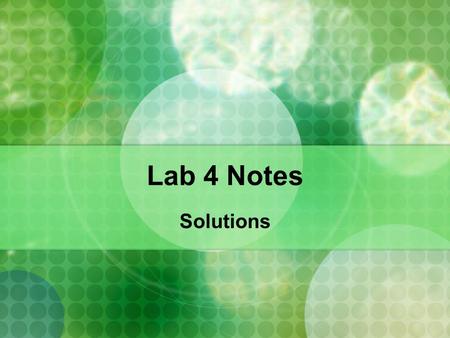 Lab 4 Notes Solutions. are homogeneous mixtures of two or more substances consist of a solvent (larger amount, usually a liquid) and solutes (smaller. 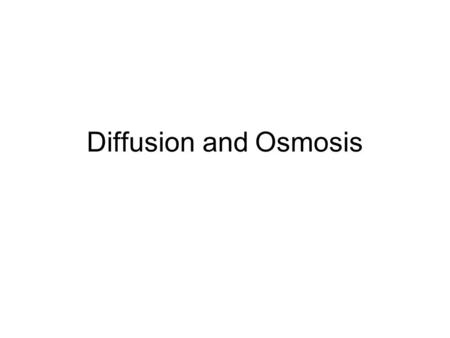 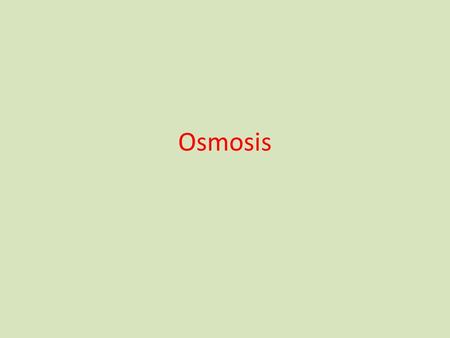 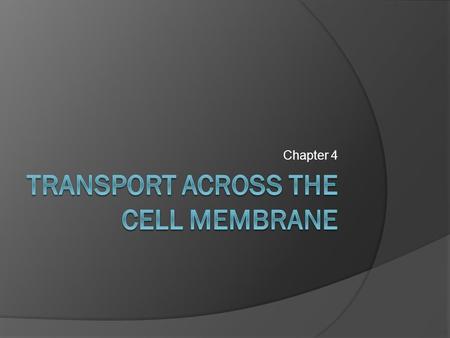 Chapter 4. Transport Across the Cell Membrane  Substances need to move into and out of the cell in order to maintain homeostasis  They can do this by. 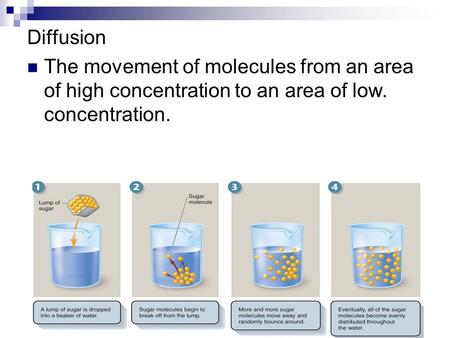