2 How We Got the Bible Textual Criticism

4 The Autographs An “autograph” is a manuscript penned by the author himself. We have ZERO autographs of any Bible book. Instead, we have thousands of copies, fragments, and versions. Textual criticism is the field of study that assesses that body of evidence to discover the most authentic text of the Scriptures.

8 Claims About the Manuscripts
Claim: “There are hundreds of thousands of manuscript errors in the text of the New Testament.” This claim is only true depending on how you count it and what you call an error. However, this statement is terribly misleading about the text. Example: “to form a more perfect Onion”

12 Hearing & Memory Errors
Faulty Hearing: Either errors in dictation or even solitary reading Memory Lapse: During the process of reading and beginning to write it on the copy, a scribe could make mistakes as he repeats the line. Reversals: Herod the King vs. King Herod Replacement: Peter vs. Simon; Jesus vs. Lord

13 Intentional Errors Sloppy Scribes: “They write down not what they find but what they think is the meaning; and while they attempt to rectify the errors of others, they merely expose their own.” (Jerome) Spelling and Grammar Changes: Changes in the Greek languages and non-standard spelling

14 Intentional Errors Harmonistic Alterations: Since many scribes knew much of their Scriptures by heart, they recognized the places in which there are parallels or quotations which do not completely follow their antecedents. For example, the shorter form of the Lord's Prayer in Luke was assimilated in many copies of Luke to agree with the longer form in Matthew 6:9-13.

15 Intentional Errors Corrections: Presumed historical or geographical conflicts Conflations: Luke 24:53 ends with the disciples “continually in the temple blessing God.” Codex Bezae has “praising.” Some manuscripts that have the conflation “praising and blessing.” Doctrinal Alterations: The Church Fathers repeatedly accuse the heretics of corrupting the Scriptures to support their views, like Marcion’s non-Jewish Jesus.

17 The Overwhelming Evidence
Daniel Wallace on Variants: “For more than two centuries, most biblical scholars have declared that no essential affirmation has been affected by the variants.” “In the last 135 years, not a single new reading of any MS has such a pedigree [as to be both new and viable]. This shows that the autographic wording is to be found among the MSS somewhere.”

19 Other Evidence Versions
Early in the history of the church, Greek documents, including the Scriptures, were translated into various languages. By the 3rd and 4th Centuries the New Testament was translated into Coptic, Syriac, Armenian, Georgian, etc.

20 Other Evidence Quotations
Metzger: “if all other sources for our knowledge of the text of the New Testament were destroyed, [the patristic quotations] would be sufficient alone for the reconstruction of practically the entire New Testament.” Irenaeus (2nd Century), Against Heresies : “At the end, moreover, of the gospel Mark says: And so the Lord Jesus, after he had spoken to them, was received into the heavens, and sits at the right hand of God.”

21 Conclusions There is overwhelming agreement between the manuscripts (upwards of 95%). The disagreements between manuscripts are usually easily understood. Honest Biblical Criticism is helpful, not hurtful, to our faith … because God has successfully preserved His Word.

23 1901 AMERICAN STANDARD The two oldest Greek manuscripts, and some other authorities, omit from ver. 9 to the end.

24 NEW LIVING TRANSLATION
The most reliable early manuscripts conclude the Gospel of Mark at verse 8.

25 THE MESSAGE Mark 16:9-20 [the portion in brackets] is contained only in later manuscripts.

26 REVISED STANDARD VERSION
Other texts and versions add as 16:9-20 the following passage:

27 Other Versions NEW INTERNATIONAL VERSION: “The most reliable early manuscripts and other ancient witnesses do not have Mark 16:9-20” ENGLISH STANDARD VERSION: “Some of the earliest manuscripts do not include 16:9-20.” 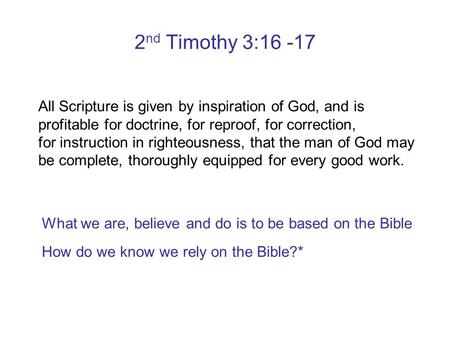 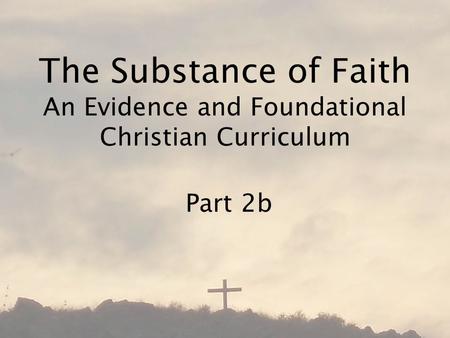 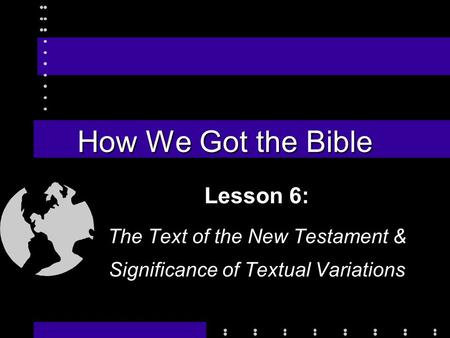 How We Got the Bible Lesson 6: The Text of the New Testament & Significance of Textual Variations. 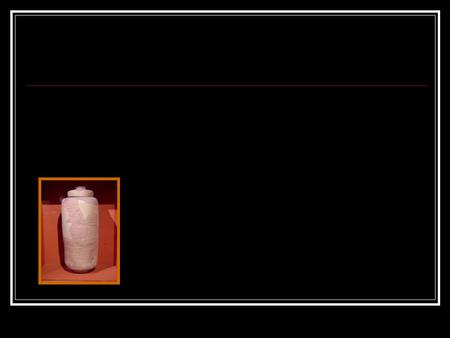 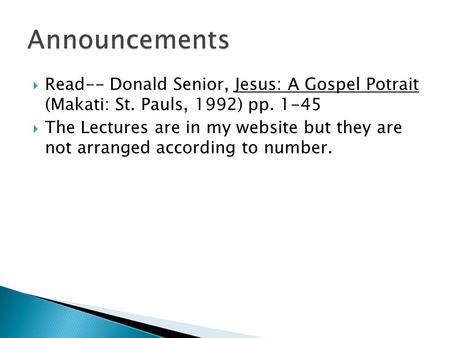  Read-- Donald Senior, Jesus: A Gospel Potrait (Makati: St. Pauls, 1992) pp  The Lectures are in my website but they are not arranged according. 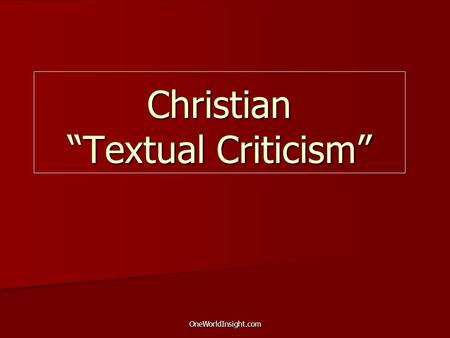 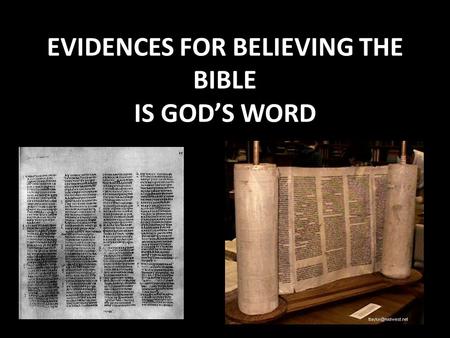 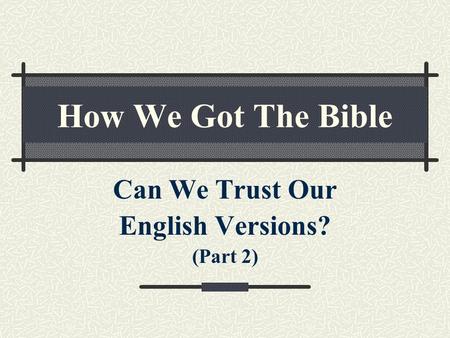 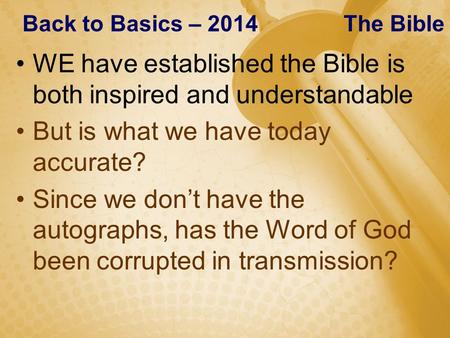 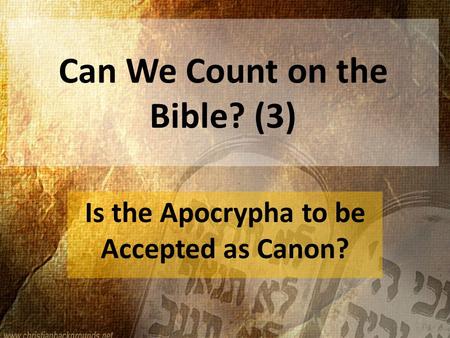 Can We Count on the Bible? (3) Is the Apocrypha to be Accepted as Canon? 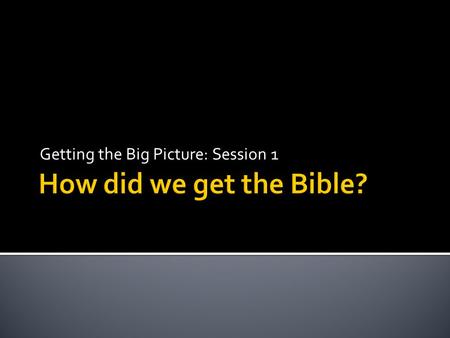 Getting the Big Picture: Session 1.  The only way we can know God is if He chooses to reveal Himself.  The Bible speaks of two classes of God’s revelation: 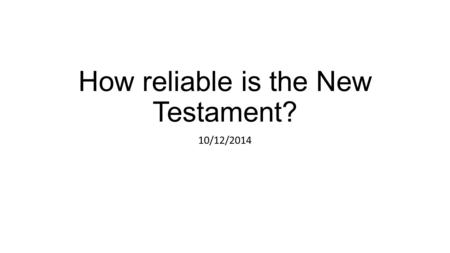 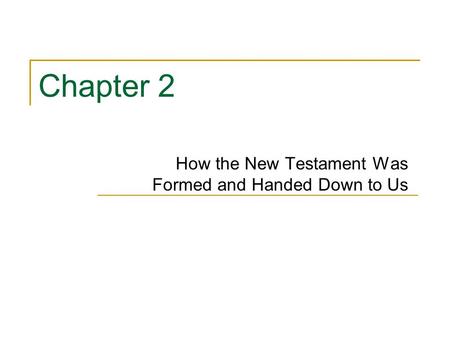 Chapter 2 How the New Testament Was Formed and Handed Down to Us.