3 Autistic Disorder: 3 main areas of impairment SOCIAL: “autistic aloneness” Lack of interest in interacting with others (e.g., through eye contact, smiling, gesturing, shared attention, playing, making friendships) Strong attachments to objects, but not people May not understand that other people have thoughts and feelings

4 Autistic Disorder: 3 main areas of impairment COMMUNICATION (verbal and nonverbal): Half of autistic children do not develop language Many have speech oddities (e.g., echolalia = echoing the words of others) Pronoun reversals: using “he” or “you” instead of “I”

7 Asperger’s Disorder Milder / higher-functioning form of autism characterized by severe impairments in the SOCIAL domain, some impairment in the ACTIVITIES/INTERESTS domain, and no significant delays in COMMUNICATION and cognitive development

8 Disruptive Behavior Disorders Characterized by undercontrolled, or externalizing behavior (i.e., “acting out”; socially disruptive behavior that is inappropriate given the age of the child and/or setting of the behavior) Behavior is typically distressing and/or annoying to those in child’s social environment Examples: ADHD, ODD, Conduct Disorder

10 ADHD Research on the etiology of ADHD implicates biological, genetic, and psychological factors A majority of kids with ADHD respond positively to stimulant medications; however, the benefits are only short-term. Cognitive-behavioral parenting and self- control therapies are important for long- term benefits.

14 Separation Anxiety Disorder Involves excessive anxiety about separating from parents or home (e.g., fears about harm coming to parents, avoidance of being alone, distress and physical complaints when separation is anticipated; school phobia = refusal to go to school) 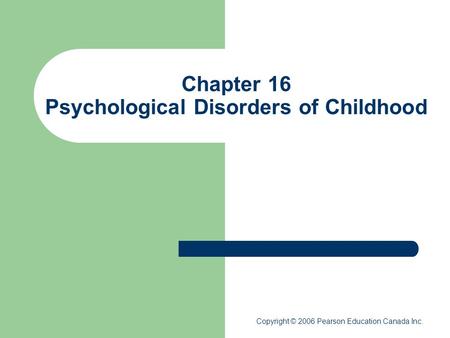 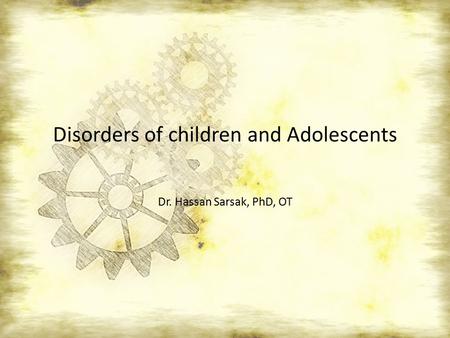 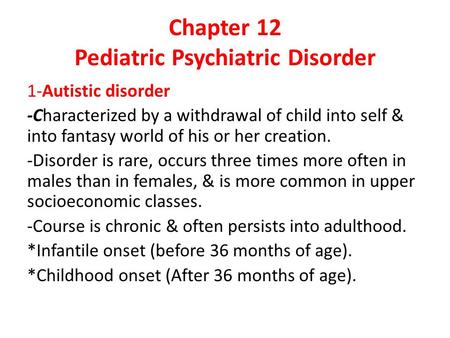 Chapter 12 Pediatric Psychiatric Disorder 1-Autistic disorder -Characterized by a withdrawal of child into self & into fantasy world of his or her creation. 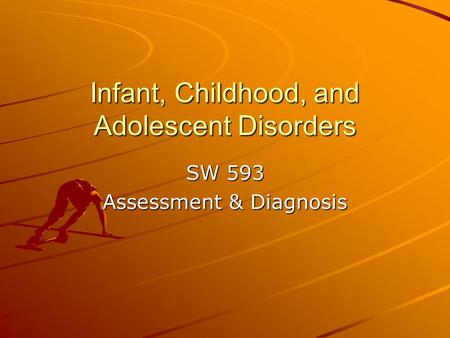 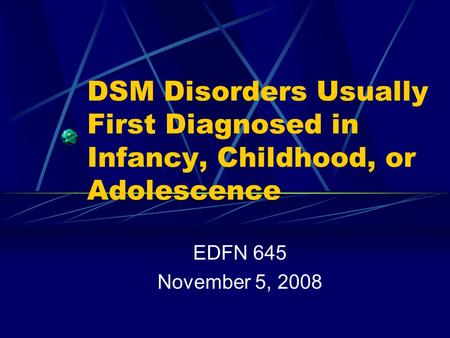 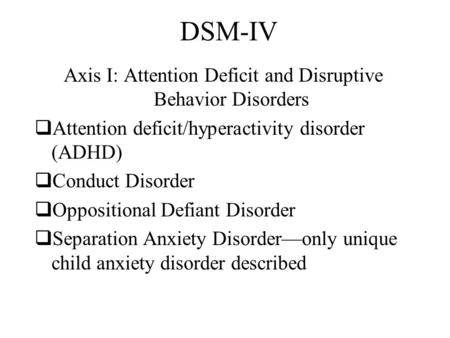 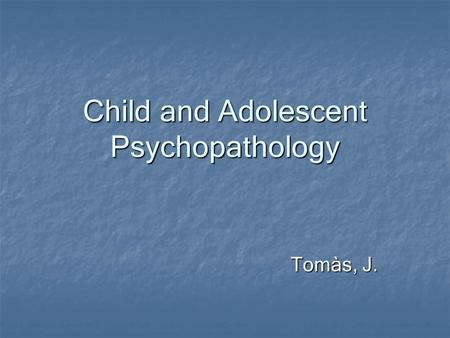 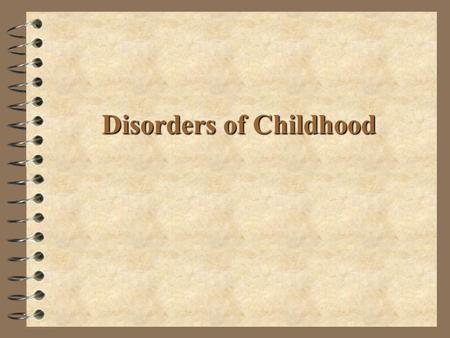 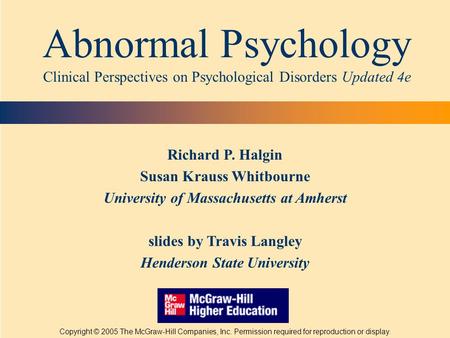 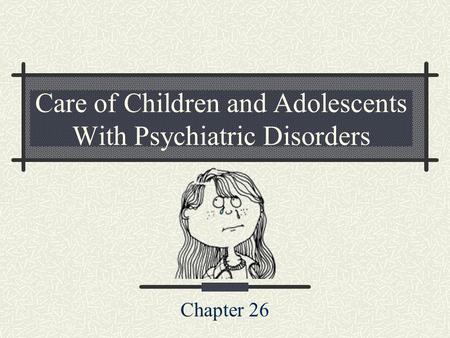 Care of Children and Adolescents With Psychiatric Disorders Chapter 26. 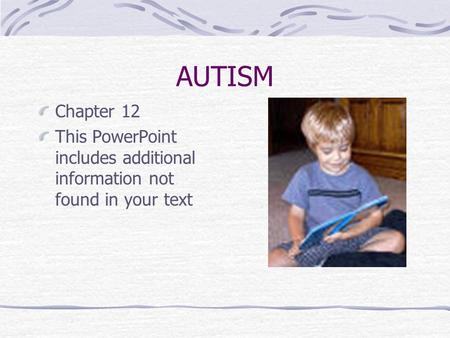 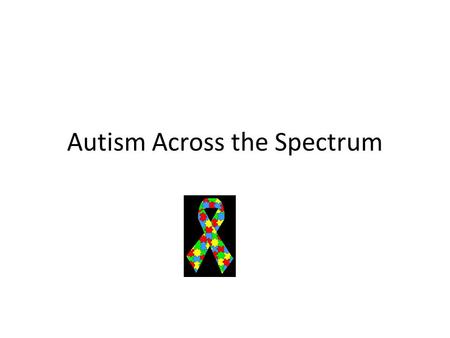 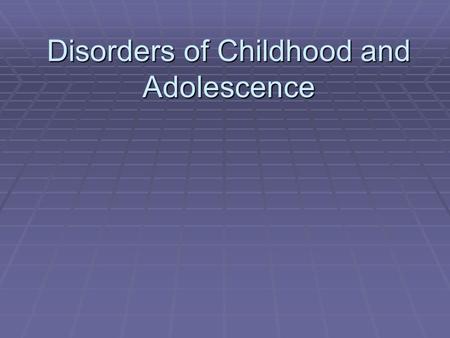 Disorders of Childhood and Adolescence.  Studies in the United States and New Zealand suggest prevalence 17-22%  More boys are diagnosed with childhood. 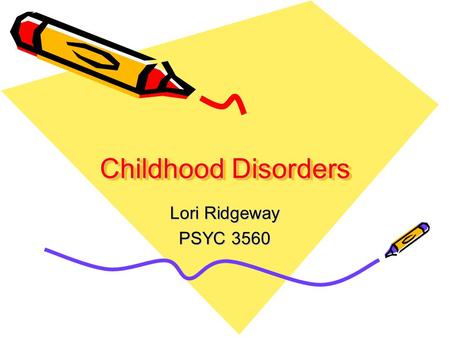 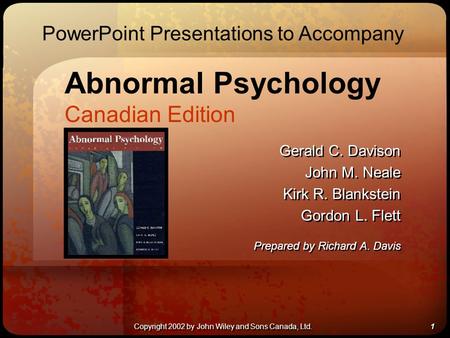 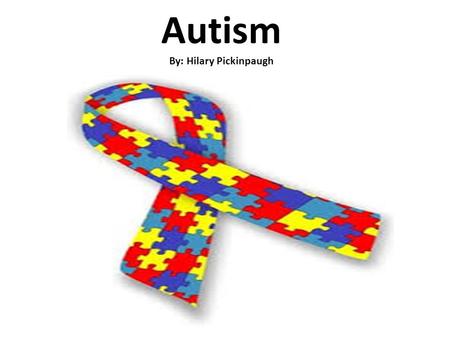 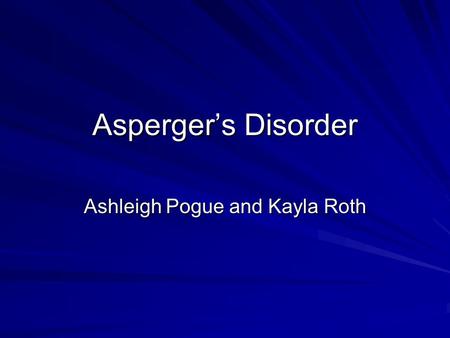 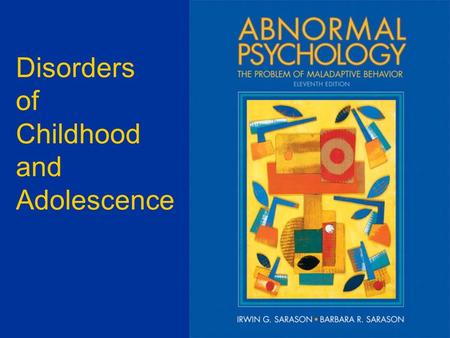 Disorders of Childhood and Adolescence. Externalizing Disorders  Disorders with behaviors that are disruptive and often aggressive  Attention-deficit.