Presentation on theme: "Review What were political machines? How did they operate and what did they seek to accomplish? What was the most infamous Political Machine of the Gilded."— Presentation transcript:

1 Review What were political machines? How did they operate and what did they seek to accomplish? What was the most infamous Political Machine of the Gilded Age and who was its boss?

3 Manifest Destiny The idea that it is America’s God-given destiny to stretch from cost-to-coast.

4 Farming in the South and West after the Civil War With Manifest Destiny, more farming was happening in the U.S. than ever before. More machines were being used in farming then ever before. Eventually, more crops were being grown than could be consumed. This led to crop prices falling and many farmers needing to borrow money. Thus many farmers went into debt and some lost their farms.

10 The farmers begin to organize The farmers realized that if they banded together, they would have more power in addressing their concerns. 1 st attempt is “The Grange.” Then comes the “Farmers Alliance. These groups wanted the government to regulate railroad shipping costs. They also started cooperatives—pooling their products and sharing supplies and profits.

11 The Populist Party A political party, mainly of Western and Southern farmers. They believed that farmers and workers should be freed from the exploitive practices of the banks, railroads, and merchants of the East coast..

13 review Overproduction led to a “glut” which resulted in falling prices which resulted in debt and foreclosures. Farmers blaimed others. Hung up on an idealized version of a mythical american past in which the self- sufficient farmers was the heart of America.

14 What they Want: 1. Restricted Immigration. 2. Free coinage of silver —this would cause inflation and drive up the price of their crops. 3. Graduated Income Tax. 4. Direct Election of Senators. 5. Government ownership (or at least regulation) of utilities— railroads, telephones, telegraphs, etc.

15 Pops. Also want “Subtresuries” Subtresuries =govt. owned wharehouses where farmers would store their crops and get low interest loans against the crops and then sell them when the price rose. All Populists demands were in the Omaha platform of 1892

17 Issue of Silver Govt. had stopped using silver in 1873 (“Crime of 73). Farmers (and western miners) want coinage of silver at 16:1 ratio to create currency inflation.

18 “Coin’s Financial School” Fictional book written in 1894 by William Harvey. One of the best-sellers of the age. Was about how the coinage of silver would solve all of the U.S. financial plans.

19 The Wizard of Oz Populist Parable

23 The issue of “Fusion.” (#11) Some Populists want to unite with the Democrats to be more powerful. (race in South) They are for “Fusion.” Others against.

24 Election of 1896 Republicans nominate William McKinley of Ohio. Conservative—for tariff, against coinage of silver. Democrats are divided on silver issue, but nominate William Jennings Bryan (who is Pro-Silver). Gives “Cross of Gold Speech.”

28 The Failures of Populism In the South, the issue of race divided poor farmers. Many Populist leaders wanted to include blacks but many whites resisted and thus continued to vote for Democrats. Americans in general like the 2-party system (Democrats and Republicans). Democrats begin to use Populists’ ideas.

Download ppt "Review What were political machines? How did they operate and what did they seek to accomplish? What was the most infamous Political Machine of the Gilded." 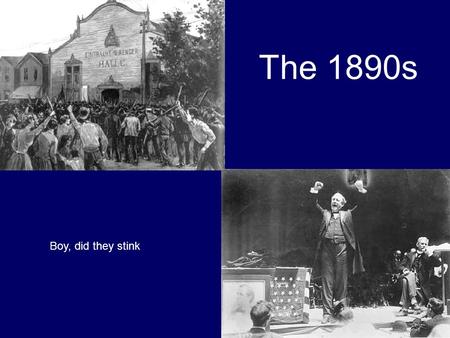