1 Symbolism in The Great Gatsby
The Importance of COLORS

2 WHITE White is the color of innocence. It is how the girls, Daisy and Jordan, are dressed in the beginning before their true characteristics are revealed. It is also the major color of Gatsby and Nick's wardrobe. They are both portrayed as innocent. Gatsby never loses his childlike faith in his relationship with Daisy, and Nick claims he never lies and that he is one of the few honest people he knows.

3 GRAY The color gray, lacking shades of blue, represents the disappearance of dreams. Objects described in The Great Gatsby using the color gray (such as The Valley of Ashes) are also objects which are described as things one cannot escape from. There are no romantic dreams to which people cling in the Valley of Ashes. F. Scott Fitzgerald describes the people who drive gray cars and live near the Valley of Ashes with shades of gray because they lead a life that does not have dreams. Their lives consist mainly of work, and they have no hope of escape. Jordan's eyes are also gray. Jordan does not have a deep love of anything. Love to her is superficial. She has no plan for her life and no dreams for her future.

4 BLUE F. Scott Fitzgerald uses blue to represent dreams and to add an element of other worldliness. Dr. T. J. Eckleburg has enormous "floating" blue eyes, which are said to be God's eyes. They are believed to view the world as God himself would. At one point Myrtle is clothed in a blue dress, which is present to represent her dreams of escaping her mundane life and running away with Tom. Most importantly, Gatsby's gardens are described as being shades of blue and are initially shown as a place where people could escape from the world and be out of touch with reality. In direct relation to Gatsby, the gardens were an essential part of his life. As Nick says in the story, "He'd come a long way to this blue lawn.”

5 YELLOW Yellow is one of the main symbolic colors in The Great Gatsby. It represents the wealth and extravagance of the rich. It also demonstrates how careless the wealthy can be though they are considered "high class" with all their money. Gatsby's car, with which Daisy kills Myrtle, is yellow. Yellow is also a shade used to connect a person's snobbery with her money--Daisy is referred to as "the golden girl," Jordan's hair has an "Autumn leaf yellow" tint, Gatsby wears a gold tie, and the twins at one of Gatsby's parties are dressed in yellow.

6 GREEN Green is a mixture of the colors blue and yellow; it represents Gatsby's dreams and his wealth hopelessly tangled together. There is a green light at the end of Daisy's dock, which suggests Gatsby has kept his dream of the Daisy he knew and loved before he made his fortune, and the fact that their relationship will always be affected by money. Green also traditionally represents spring or a new beginning. Gatsby sees the green light as hope for a relationship with Daisy. Also, in the end, Nick associates Gatsby's dream and the green light to the American dream, "a green breast of new land" where people could come to start over.

7 Lavender Lavender is the color of indulgence and is used mainly in reference to Gatsby. The rooms of Gatsby's mansion are decorated in lavender, and he wears lavender shirts. One of the twins in yellow also mentions that he sent her a new dress with lavender beads after hers was ruined. Lavender represents things which were done that were not necessary, things that the rich characteristically do. Because purple dye was very expensive to get back in the early European days, only the very rich could afford to wear purple clothes; in fact, during the Elizabethan period, only Royalty was allowed to wear purple.

8 Symbolism in The Great Gatsby
The Elements

9 EAST EGG = AIR It is crisp, clean, white, breezy here in East Egg.
Everything is fresh and pristine. The upper crust (higher class) live here. The Buchannan couple have an “air” of self importance about them. Old Family Money dominates – this family has been on top looking down on the rest of the world for quite a while. Heaven is represented in East Egg.

10 West Egg = WATER New Money abounds.
The American Dream is alive and well as even immigrants from across the water become successful. Partygoer’s (mostly perfect strangers to even Gatsby himself) practically drown themselves in Gatsby’s wealth. Jay even dies in the pool.

11 New York - EARTH The working class live in the Valley of Ashes.
Everything is gray and desolate. Hopes and Dreams are more rare in this earthly place. God (symbolized by the forgotten billboard of Dr. T.J. Eckleburg) watches the earth from above but seems to have forgotten this class of people.

12 Manhattan = FIRE It is always HOT here.
They cannot seem to quench their thirst while in Manhattan. Violence seems commonplace here. The atmosphere, moods of characters tend to be HOT here as well. Hell is represented by both Manhattan (fire) and New York (earth). 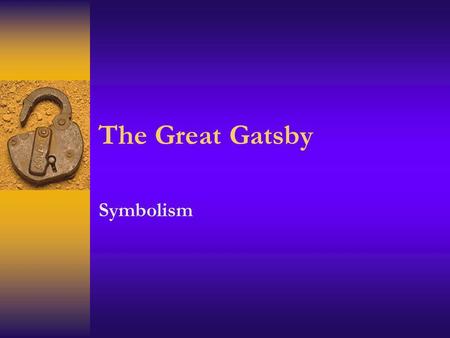 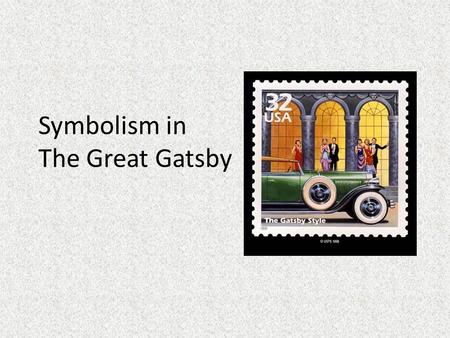 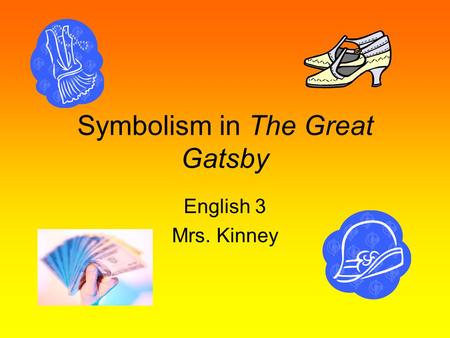 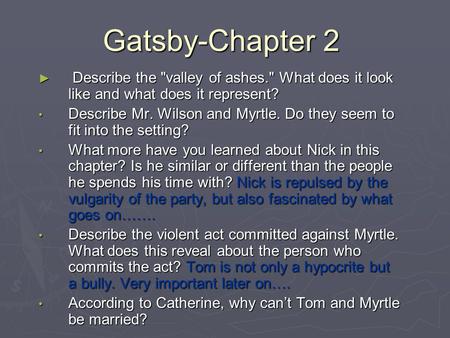 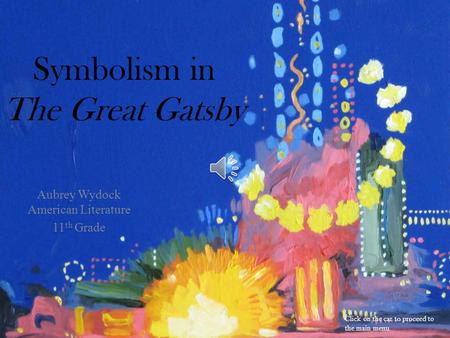 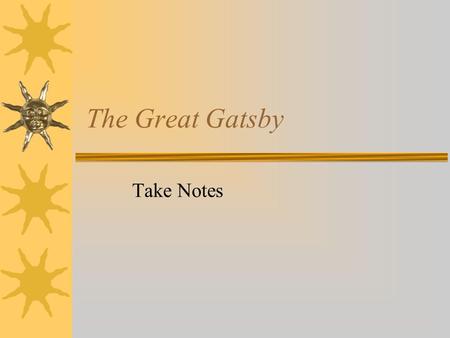 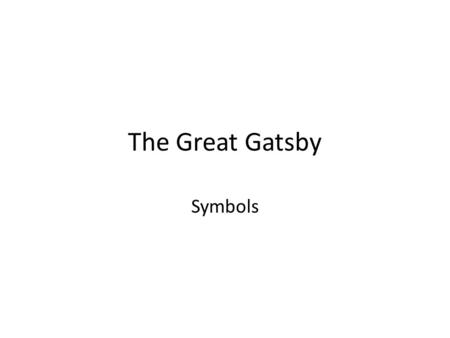 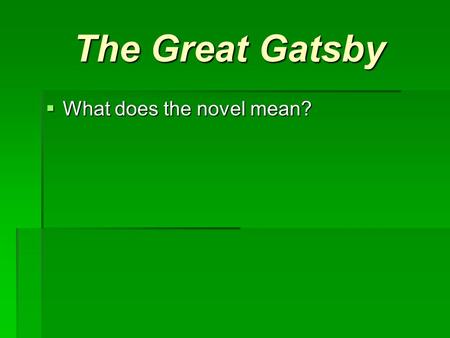 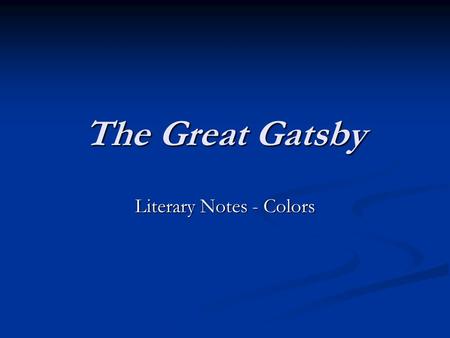 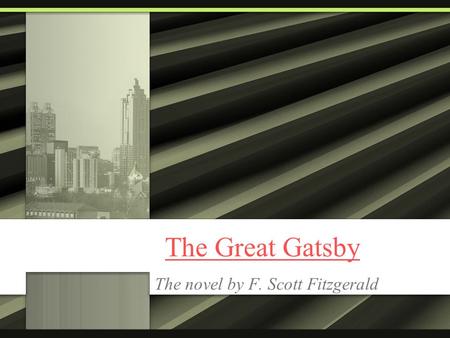